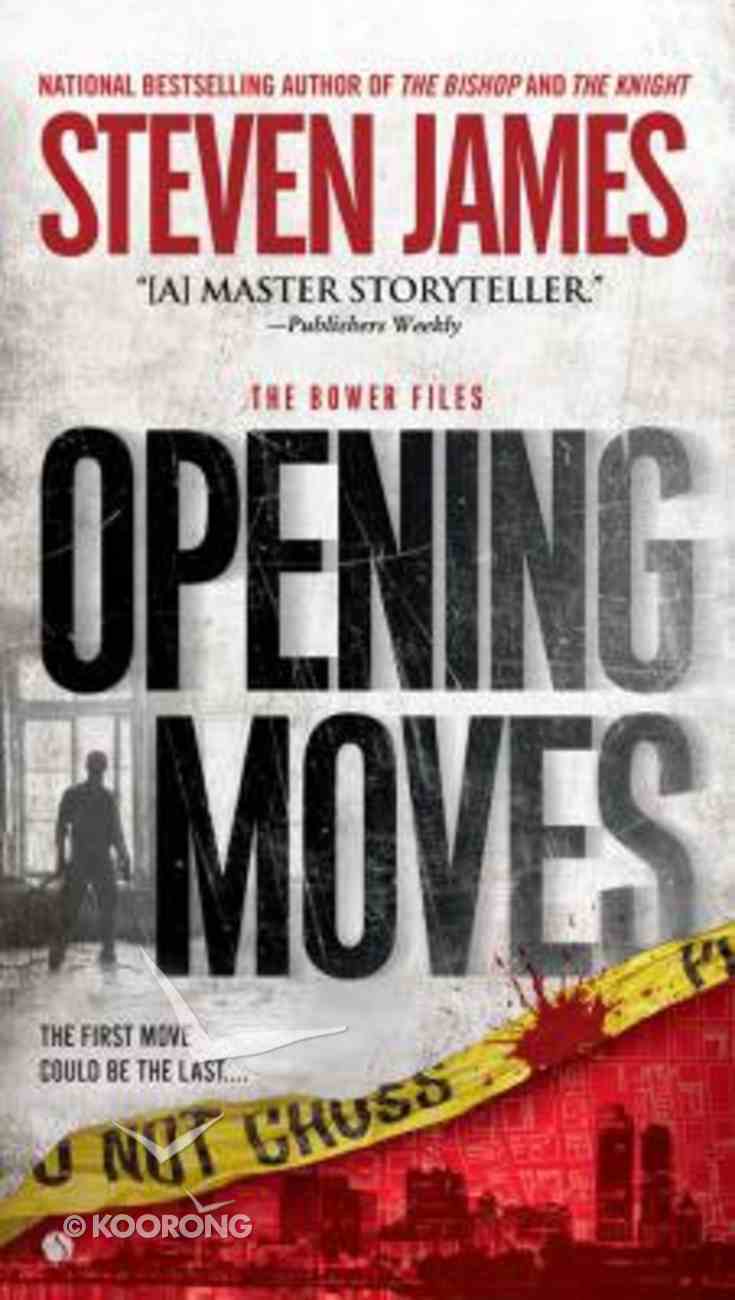 Milwaukee, 1997. In a city still reeling from the crimes of Jeffrey Dahmer, a series of ghoulish, inexplicable kidnappings, mulitations and murders draws authorities into a case like nothing they've ever seen. The police are convinced that a Dahmer copycat...

The Knight (#03 in The Bowers Files Series)
Steven James
eBook

The Bishop (#04 in The Bowers Files Series)
Steven James
eBook

The Pawn (#01 in The Bowers Files Series)
Steven James
eBook

The Rook (#02 in The Bowers Files Series)
Steven James
eBook

The Queen (#05 in The Bowers Files Series)
Steven James
eBook

Milwaukee, 1997. In a city still reeling from the crimes of Jeffrey Dahmer, a series of ghoulish, inexplicable kidnappings, mulitations and murders draws authorities into a case like nothing they've ever seen. The police are convinced that a Dahmer copycat is on the loose. But Patrick Bowers, working as a homicide detective, realises that this is far more than an ode to the city's most famous cannibal, but a killer working with his own agenda. Now Bowers must track down an elusive monster in a pursuit that will change his life forever.
-Publisher

Steven James is an award-winning author and professional storyteller. He has written more than a dozen books and over 500 articles, stories, and scripts. Steven appears weekly at conferences, churches, schools, and special events around the country sharing his unique blend of drama, comedy, and inspirational speaking. He lives with his wife and three daughters in eastern Tennessee.


Vincent Hayes stepped cautiously into the bar, trying un&not;successfully to still his heart, to quiet his apprehension.


He&rsquo;d never done this before, never tried to pick up a man.


As he entered, two patrons who were seated at the bar&mdash; Mexican in his mid-twenties and an older Cauca&not;sian who looked maybe a few years older than Vincent, around forty-five or so&mdash; turned to face him. The younger man had his hand resting gently on the middle-aged gen&not;tleman&rsquo;s knee.


Vincent gave the men a somewhat forced nod, they smiled a bit, then turned to gaze into each other&rsquo;s eyes again and went back to their conversation&mdash; perhaps a joke that the Mexican was telling, because Vincent heard the other man chuckle as he passed by and then took in the rest of the bar.


Country music played. Nondescript. Some singer he didn&rsquo;t recognize. The neon beer signs and dim overheads did little to illuminate the nook and crannied pub. Vincent scanned the tables looking for the right kind of man&mdash; young, athletic, but not too muscular. The drugs he was carrying were potent, but muscle mass might diminish their effect. Maybe. He wasn&rsquo;t sure. He&rsquo;d never used the drugs before, but tonight he couldn&rsquo;t risk taking the chance that the man would awaken before he was done with him.


He was looking for a black man.


All around him in the dim light, men stood talking. Most were gathered in groups of two or three. Very few single guys. Vincent was brawny and cut an impressive figure that turned a few heads, but none that looked promising.


Even though he wanted to be alert so he wouldn&rsquo;t make a mistake, he also needed something strong to take the edge off, to help anesthetize his inhibitions. Vincent took a seat at the bar and ordered a vodka.


Yes, yes, of course he was nervous. But there was also adrenaline there. Anxiety churning around violently be&not;neath the surge of apprehension.


Keep your cool. This is not a time to make some kind of stupid mistake.


So far he hadn&rsquo;t seen anyone who fit the bill. Some were too old. A few younger couples were moving in time to the music on the dance floor on the far side of the bar. No single African-American like he was look&not;ing for.


He felt the brush of movement against his arm. A slim white guy who didn&rsquo;t look old enough to be here legally drew up a barstool. &ldquo;Waiting for someone?&rdquo; His voice was melodic and inviting. Charming might be a better word for it.


Vincent downed half of his vodka.


&ldquo;Lucky guy,&rdquo; the man said under his breath, but, al&not;most certainly on purpose, loud enough for Vincent to hear.


Get out of here. Try another bar. Already too many peo&not;ple have seen you in here.


Although it was supposed to happen at this bar, Vin&not;cent realized it was more important for it to happen than where it did.


&ldquo;Sorry,&rdquo; he mumbled. He laid some cash beside his unfinished drink, then stood to leave. He&rsquo;d taken two steps toward the door when he saw the type of man he was looking for: an athletic African-American, sitting alone in the booth near the narrow hallway to the rest&not;rooms.


Just like the young man who&rsquo;d taken a seat beside Vin&not;cent a moment ago, this guy looked on the shy side of twenty-one, but Vincent guessed that carding people wasn&rsquo;t exactly at the top of the management&rsquo;s priority list.


He had a beer bottle in front of him, a Lienenkugel&rsquo;s. Almost empty. Vincent ordered two more from the bar&not;tender, excused himself from the guy who&rsquo;d been com&not;ing on to him, and carried the two beers toward the booth.


Just get him to the minivan. You&rsquo;re bigger. You can eas&not;ily overpower him in there.


As Vincent crossed the room, he surreptitiously dropped the two pills into one of the bottles and gently swirled them to the bottom.


When he was halfway to the booth, the young black man looked his way.


He&rsquo;d already decided he would cuff him as soon as he got him into the van. Hopefully, he&rsquo;d be too drugged to fight much or call for help, but Vincent had a gag and duct tape waiting just in case. If he wasn&rsquo;t able to get him to take off his clothes before he cuffed him, he would strip the guy, cutting off his shirt and jeans with the fabric shears when he was done.


And then move forward with things from there.


Almost to the booth now, he waited for the man to say something, but when he didn&rsquo;t, Vincent spoke, trying out the same line the guy had used on him a few mo&not;ments earlier. &ldquo;Waiting for someone?&rdquo;


The black man&mdash; kid, really&mdash; looked his way, wide-eyed. Wet his lips slightly. &ldquo;I saw Mark with you. That what he asked you?&rdquo;


Vincent set down the drinks. &ldquo;Busted.&rdquo;


The young man eyed the beers, and said demurely, &ldquo;One of those for me?&rdquo;


Vincent slid the drugged beer toward him, smiled again, and took a seat.


The guy offered Vincent a soft nod, accepted the drink, and held out his hand palm down, a diminutive handshake. &ldquo;I&rsquo;m Lionel.&rdquo;


Lionel looked at him as if he&rsquo;d just said something humorous. &ldquo;You haven&rsquo;t done this before. Ever?&rdquo;


&ldquo;No.&rdquo; Vincent took a drink as a way of hiding, but also of, hopefully, encouraging the young man to drink his beer as well.


When Lionel had finished the swig, his eyes drifted toward Vincent&rsquo;s left hand. Toward his wedding ring.


&ldquo;Why tonight? Why did you come tonight? Is she out of town?&rdquo;


The last thing Vincent wanted to do right now was talk about Colleen. &ldquo;Yes,&rdquo; he said, lying. &ldquo;Visiting her parents.&rdquo;


&ldquo;And you decided to try something a little different? For a change?&rdquo;


&ldquo;To step out on a limb. Yes.&rdquo; His heart was beating. Thinking about Colleen made all of this harder.


Vincent took another sip from his drink. So did Lio&not;nel.


&ldquo;I don&rsquo;t live far from here,&rdquo; Vincent offered, and then immediately realized that it was much too forward. On the other hand, if his suspicions were right, Lionel was working the place, looking for payment for his compan&not;ionship, and wasting a lot of time on formalities wouldn&rsquo;t serve either of their interests.


Lionel laid his hand gently on Vincent&rsquo;s forearm. &ldquo;I can be whatever you want me to be, Vincent.&rdquo;


It was a long moment before he removed his hand.


And although Vincent was anxious to get going, he realized he needed a little time for the drugs to work, so he answered Lionel&rsquo;s questions about where he&rsquo;d gone to college, UW&ndash;La Crosse, and what he did for a living, managed a PR firm. In response, Lionel mentioned that he had a theater degree from DePaul and was an actor &ldquo;between jobs.&rdquo;


As the minutes passed, the drugs and alcohol started to have the desired effect.


&ldquo;Um-hmm.&rdquo; His voice was wavering, unfocused.


No response, just a bleary nod.


So Vincent helped Lionel to his feet and supported him on the way to the door.