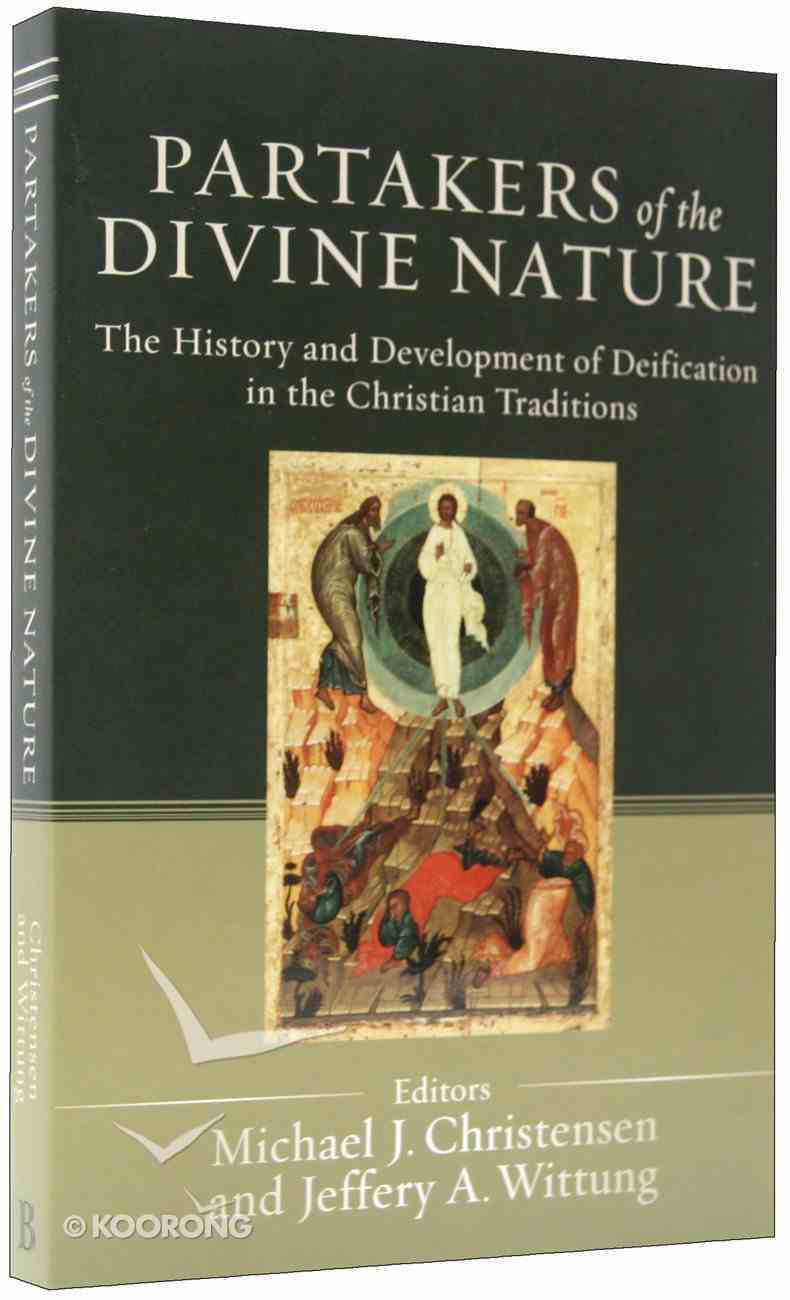 Partakers of the Divine Nature

This critical volume focuses on the issue of continuity and discontinuity of the Christian concept of theosis, or deification, in the intellectual history of ideas. It addresses the origin, development, and function of theosis from its antecedents in ancient...

Extraordinary Women of Christian History: What We Can Learn From Their Struggles and Triumphs
Ruth A Tucker
Paperback

Martin Luther and the Enduring Word of God: The Wittenberg School and Its Scripture-Centered Proclamation
Robert Kolb
Hardback

This critical volume focuses on the issue of continuity and discontinuity of the Christian concept of theosis, or deification, in the intellectual history of ideas. It addresses the origin, development, and function of theosis from its antecedents in ancient Greek philosophy to its nuanced use in contemporary theological thought. Often seen as a heresy in the Protestant West, the revival of interest in deification in both lay and scholastic circles heralds a return to foundational understandings of salvation in the Christian church before the divisions of East and West, Catholic and Protestant.

The five sections of this work, written by scholars from the Eastern Orthodox, Roman Catholic, and Protestant traditions, introduce and summarize the nature and function of deification and then lead the reader through four general historical periods of development: Greek and New Testament, Patristic, Medieval and Reformation, and Modern thought. This multi-author work accomplishes what no single author could: it treats the various visions and trajectories of deification that have emerged over the span of a millennium in the various Christian traditions, resulting in a sweeping yet thorough and distinctive contribution to scholarly and informed lay discussion of theosis.

Part I: The Context of Theosis in Christianity The Problem, Promise, and Process of Theosis--Michael J. Christensen The Place of Theosis in Orthodox Theology--Andrew Louth Part II: Theosis in Classical and Late Antiquity Deification of the Philosopher in Classical Greece--John R. Lenz Can We Speak of Theosis in Paul?--Stephen Finlan Does 2 Peter 1:4 Speak of Deification?--James Starr Part III: Theosis in Patristic Thought ^The Strategic Adaptation of Deification in the Cappadocians--J. A. McGuckin Rhetorical Application of Theosis in Greek Patristic Theology-- Vladimir Kharlamov Divinization as Perichoretic Embrace in Maximus the Confessor--Elena Vishnevskaya Paradise as the Landscape of Salvation in Ephrem the Syrian--Thomas Buchan Part IV: Theosis in Medieval and Reformation Thought The Copto-Arabic Tradition of Theosis: A Eucharistic Reading of John 3:51-57 in Bulus al-Bushi’s Treatise On the Incarnation--Stephen J. Davis St. Anselm: Theoria and the Doctrinal Logic of Perfection--Nathan R. Kerr Martin Luther: “Little Christs for the World”; Faith and Sacraments as Means to Theosis --Jonathan Linman John Calvin: United to God through Christ --J. Todd Billings John Wesley: Christian Perfection as Faith Filled with the Energy of love ^--Michael J. Christensen Part V: Theosis in Modern Thought Neo-Palantism, Divinizing Grace, and the Breach between East and West --Jeffrey D. Finch Sergius Bulgakov: Russian Theosis--Boris Jakim Karl Rahner: Divinization in Roman Catholicism ^--Francis J. Caponi, OSA Theosis in Recent Research: A Renewal of Interest and a Need for Clarity --Gösta Hallonsten Resources on Theosis with Select Primary Sources in Translation-- Jeffery A. Wittung. -Publisher.

"The contributors to this rich and varied volume have reached across the divides of time, place, and culture to explore the deepest hopes and wildest aspirations of Christians in their relationship with God. Historians, students, ecumenists, and the burgeoning company of enthusiasts for spirituality will all enjoy the abundant and provocative feast that is served up here."--Kathleen McVey, J. Ross Stevenson Professor of Early and Eastern Church History, Princeton Theological Seminary"This groundbreaking, panoramic collection of studies on the theme of deification/theosis is most welcome. These essays clearly demonstrate that the grand and sublime calling of every human being to participate in the very life of God has always been central in Eastern Orthodox Christianity. They also convincingly reveal that this high calling was intuited by the ancient Greek philosophers, and has been present in varying forms in the thought of major figures in Western Christianity from Anselm to Karl Rahner. I believe this finely conceived and well-crafted volume will help significantly to deepen the understanding and appreciation of salvation as deification for all who read it."--David C. Ford, associate professor of church history, St. Tikhon's Orthodox Theological Seminary"This is a timely book that offers a fuller scope and history of the theme of deification than is possible for a single author. This [can] be a basic textbook for general, wide-ranging courses on 'Deification in the Christian traditions.'"--John Behr, professor of patristics, St. Vladimir's Orthodox Theological Seminary "This is a welcome contribution to ecumenical theology! Over the last twenty years the theme of deification has become one of the most significant and fruitful settings of Christian theological dialogue, standing at the nexus between Eastern and Western Christian traditions. There has been no lack of provocative proposals, or stern critiques. But we have lacked--until now--a broad and reliable collection that places the various specialized contributions in perspective and provides a sense of what is at stake. All who are interested in this important topic should begin here!"--Randy L. Maddox, professor of theology and Wesleyan studies, Duke University Divinity School"One of the great values of this volume is that it expands the discussion of theosis, often confined largely to the Early Church Fathers and Orthodoxy, to include a repertory of outstanding thinkers, philosophers, theologians, and historians from the Orthodox, Roman Catholic, Copto-Arabic, and Protestant traditions from the early church to the present. Hence, it is a welcome and valuable contribution to the bibliography and analysis of the theme of theosis."--S T Kimbrough, United Methodist scholar"These essays analyze the history of exegesis of major biblical passages that teach that the faithful are becoming 'partakers of the divine nature' (2 Peter 1:4), tracing the debate through its Pauline and Johannine analogues, and through patristic, medieval, Reformation, and modern Christian developments. Protestant historical theologians will find instructive the sections on Luther, Calvin, and Wesley, as compared with the Cappadocians, Ephrem, Maximus, and Anselm, as well as more recent writers such as Bulgakov and Karl Rahner. They establish the persistence and the renewal of interest in this theme in recent research."--Thomas C. Oden, general editor, Ancient Christian Commentary on Scripture
-Publisher

This critical volume focuses on the concept of deification in Christian intellectual history. It draws together Eastern Orthodox, Roman Catholic, and Protestant scholars to introduce and explain the theory of deification as a biblically rooted, central theme in the Christian doctrine of salvation in diverse eras and traditions. The book addresses the origin, development, and function of deification from its precursors in ancient Greek philosophy to its nuanced use in contemporary theological thought. The revival of interest in deification, which has often been seen as heresy in the Protestant West, heralds a return to foundational understandings of salvation in the Christian church before divisions of East and West, Catholic and Protestant. Originally published in hardcover, this book is now available in paperback to a wider readership.
-Publisher

Jeffery A. Wittung is assistant editor at Baker Academic and a Ph.D. candidate at Drew University, where he was co-coordinator of the international academic conference on theosis in 2004, these papers have been published in ther book Partakers of the Divine Nature: The History and Development of Deification in the Christian Traditions.

Michael J. Christensen (M.A. Yale Divinity School; Ph.D., Drew University) is Director of the Doctor of Ministry Program at Drew University, where he teaches religious studies and spirituality. He has published eight books, including C. S. Lewis on Scripture, Children of Chernobyl, The World After Chernobyl, The Heart of Henri Nouwen, Spiritual Direction, and numerous journal articles.