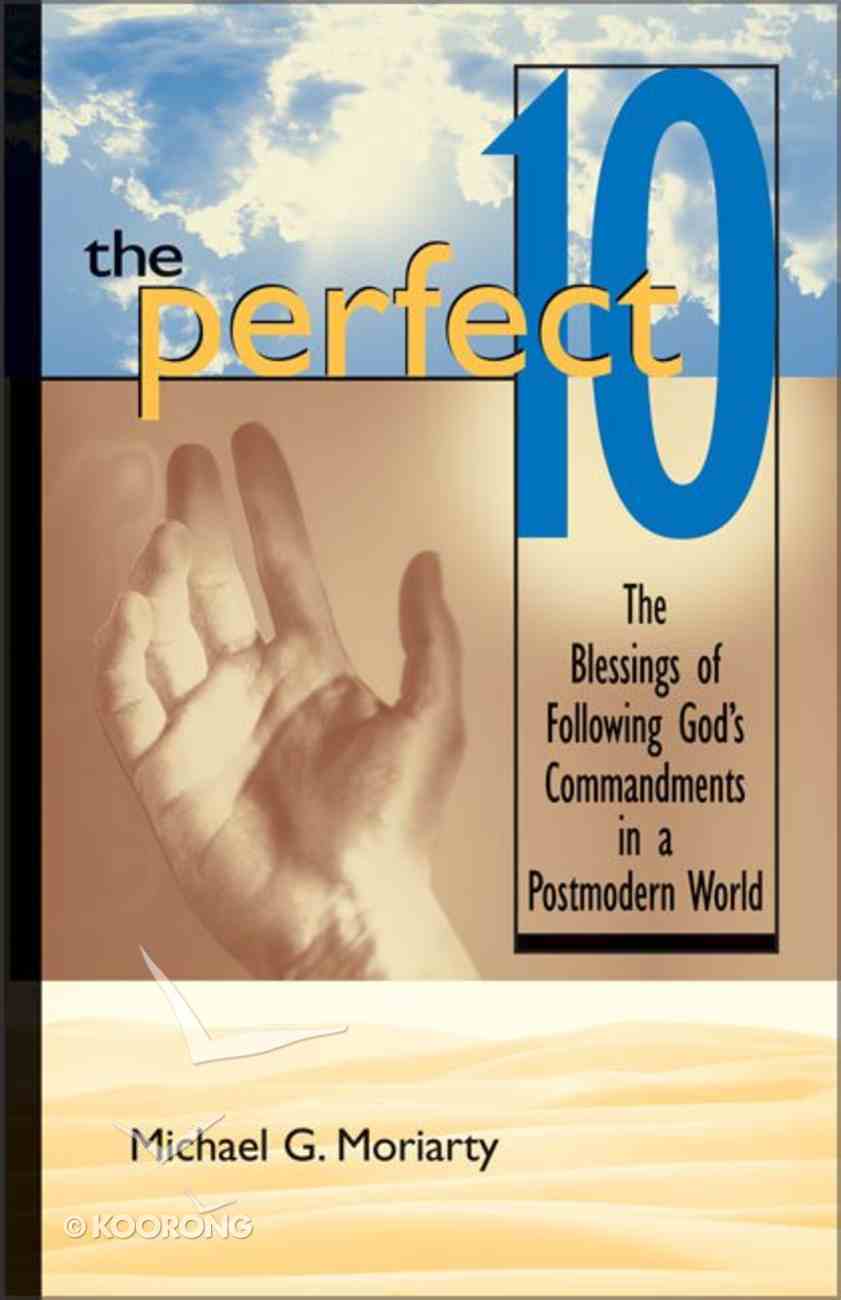 Most of us realize that traffic laws exist to preserve our lives, not cramp them. Yet when it comes to moral laws, 66 percent of Americans believe there are no absolutes. Is it any wonder, then, that the highway of...

Most of us realize that traffic laws exist to preserve our lives, not cramp them. Yet when it comes to moral laws, 66 percent of Americans believe there are no absolutes. Is it any wonder, then, that the highway of our postmodern culture is strewn with wrecks? Broken marriages, overcrowded prisons, murder in the classrooms, babies having babies - -they're what happen when we confuse liberty with ignoring the rules of the road. That's why Michael Moriarty is convinced that the Ten Commandments really are The Perfect 10. Behind them lie God's concern for our welfare and his understanding of the indelible truths that govern our world, our relationships, and our inner being. One by one, Moriarty reveals the Ten Commandments as the keys to wholeness and freedom and shows their far-reaching application for us today. For the Perfect 10 remain the ideal ethical compass. They help us align our lives with the character of God; and to a world hurtling blindly down the dead-end road or moral rela
-Publisher

Introduction In the year 63 b.c., the great Roman general Pompey entered Jerusalem with a vengeance. He approached the holy temple and thousands of Jews fell to the ground before him and pleaded with him not to violate the sacred 'Inner Sanctum,' the Holy of Holies. This piqued Pompey's interest. He had heard rumors that the inner regions of the temple contained great riches and hidden secrets. Some even alleged that the Jews kept their God hidden because they really worshiped the head of a donkey. As Pompey tore away the veil of separation and marched into the Holy of Holies, a look of amazement flashed across his face. The dark inner chamber was empty. There was no representation or graven image of the Jewish God. Shocked with disbelief, the angry general marveled that he could carry the Jews back to Rome, but he could not lay his hands on their God. What was conspicuously absent from the pitch-black, windowless Inner Sanctum was Israel's ark. After the exile, a remnant of Jews returned to Judah and rebuilt the temple. Jewish historical sources along with the testimony of Scripture affirms that the ark was not present in the Holy of Holies in the second temple. Its disappearance is a mystery. The search for the ark continues to be a fascinating historical pursuit. The sacred ark that once stood at the center of the temple and manifested the power and glory of God is lost. But it's what was inside the ark that is important. The character and presence of God were represented most vividly by the tablets of the Law contained inside the ark. The Ten Commandments reflect God's holiness and establish his covenant love. King Solomon reminded God's people that inside the ark was the 'covenant of the Lord' that God had made with their fathers when he brought them out of Egypt (1 Kings 8:21). This special covenant was God's binding 'promise' to liberate and bless those who committed themselves to him. Before the altar of the Lord, in front of the whole assembly of Israel, Solomon spread his hands toward heaven and said: 'O Lord, God of Israel, there is no God like you in heaven above or on earth below --- you who keep your covenant of love with your servants who continue wholeheartedly in your way.' (1 Kings 8:23 niv) Behind the manifestation of God's power and glory channeled through the ark was his love. Because what was inside the ark was God's covenant of love --- the Ten Commandments. These tablets of love reveal God's character and will. They are ten standards to live by; ten absolutes; the Ten Words to direct us; ten ways to nurture a lasting, loving relationship with our God. They are still 'The Perfect Ten.' The gradual shift from modernism to postmodernism has left Western culture without a moral compass. The church can whine about moral decline, about the paganizing of America and the fact that we are no longer one nation under God, but the painful truth is the church has not sufficiently taught her own people. The steady growth of biblical illiteracy and the neglect of God's moral law have left the church with a shaky foundation for living as Christians in a postmodern culture. Without a return to our biblical roots and a renewed emphasis on God's law, the church will coast like a ship at sea without a rudder. Until our moorings are recovered, God's people will lack the spiritual insight and moral authority to resist the aggressive incursion of cultural decadence. Biblical illiteracy will continue to soar and our impact on the culture will be minimal. This ought to be a powerful motivation to renew our understanding of and appreciation for the bountiful treasure of the Ten Commandments. In ancient Israel the 'Ten Words' were direct evidence of God's relationship with his people and communicated that his ways were higher than the ways of the surrounding nations. They stood as his revealed will for moral conduct and the way life should be lived. Today they continue to speak to us about what life is all about, bringing instruction, guidance, protection, and blessing to all faithful believers (Ps. 94:12). They are ten steps to liberty. Christians are prone to blame others for America's cultural erosion. We often point fingers at liberal politicians, secular humanists, New Age gurus, and media elites. But the tragic fact remains: we, too, have contributed to our culture's moral decline by removing the Ten Commandments from our instruction. The Ten Commandments reveal to us what God wants to be known and that he wants to keep his people free. He is the loving God of relationships who desires that we know him and make him known. To accomplish his purposes we must be healthy. With God's 'Ten Liberating Treasures' dwelling richly in our hearts, truth will revive us, love and holiness will be our guiding lights, and the soul of the church will shine brightly in a postmodern world.