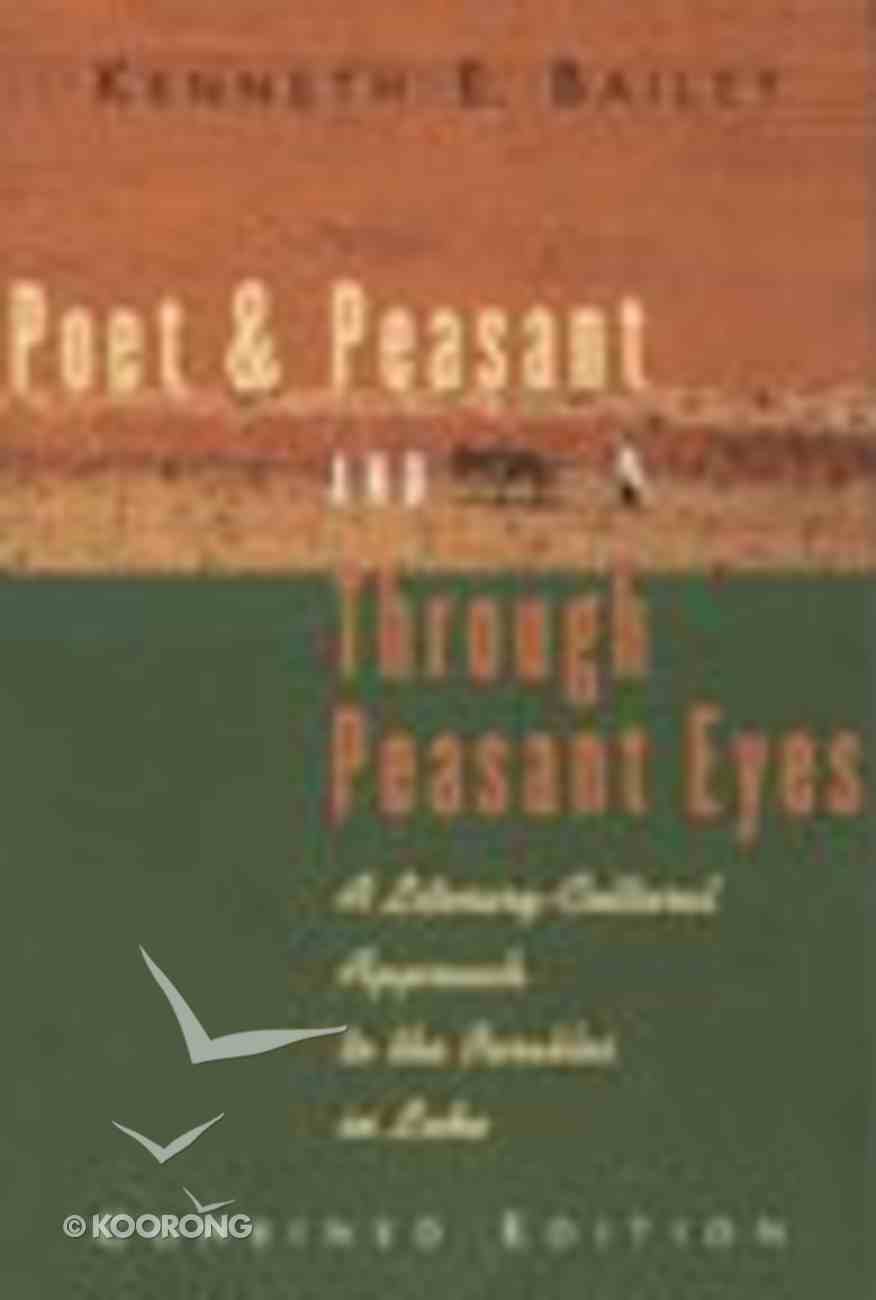 This volume is a combined edition of Poet and Peasant and Through Peasant Eyes, Kenneth Bailey’s intensive studies of the parables in the gospel of Luke. Bailey begins by surveying the development of allegorical, historical-eschatological, aesthetic, and existential...

The Cross and the Prodigal
Kenneth Bailey
eBook

This volume is a combined edition of Poet and Peasant and Through Peasant Eyes, Kenneth Bailey’s intensive studies of the parables in the gospel of Luke.

Bailey begins by surveying the development of allegorical, historical-eschatological, aesthetic, and existential methods of interpretation. Though figures like Julicher, Jeremias, Dodd, Jones, and Via have made important advances, Bailey sees the need to go beyond them by combining an examination of the poetic structures of the parables with a better understanding of the Oriental culture that informs the text.

Bailey’s work within Middle Eastern peasant culture over the last twenty years has helped him in his attempt to determine the cultural assumptions that the teller of the parables must have made about his audience. The same values which underlay the impact of the parables in Christ’s time, Bailey suggests, can be discovered today in isolated peasant communities in Egypt, Lebanon, Syria, and Iraq. Because time has made almost no impact in these cultural pockets, it is possible to discern, for example, what it meant 2,000 years ago for a friend to come calling at midnight, or for a son to ask for his inheritance prior to his father’s death.

In addition to illuminating the cultural framework of the parables, Bailey offers an analysis of their literary structure, treating the parabolic section as a whole as well as its individual components. Through its combination of literary and cultural analyses, Bailey’s study makes a number of profound advances in parabolic interpretation.

1. THE PROBLEM AND THE TASK

(1) The Historical-Eschatological: Dodd and Jeremias
(2) Jones: Parables as Art
(3) Linnemann and Via: The Existential Perspective

Reaction and Assessment: A Remaining Task

The Basic Problem: Cultural Foreignness
A Review of Types of Solutions to the Cultural Problem
Oriental Exegesis: A Proposal

A definition of "Oriental exegesis"
Ancient literature: its importance and the exegete's problem in assessing it

The archaic nature of his life style Past attempts at gleaning insights from Middle Eastern peasantry
The unfinished task: its method and its controls

The significance of the Oriental versions for exegesis

3. METHODOLOGY (2): FOUR TYPES OF LITERARY STRUCTURES IN THE NEW TESTAMENT AND THEIR SIGNIFICANCE FOR THE INTERPRETATION OF PARABLES

Part Two: AN ANALYSIS OF FOUR PARABLES AND TWO POEMS IN THE TRAVEL NARRATIVE OF LUKE

Kenneth E. Bailey (Th.D., Concordia Theological Seminary) is an author, lecturer and emeritus research professor of Middle Eastern New Testament studies for the Tantur Ecumenical Institute in Jerusalem. An ordained Presbyterian minister, he serves as Canon Theologian of the Diocese of Pittsburgh of the Episcopal Church, USA. He holds graduate degrees in Arabic language and literature, systematic theology, and New Testament. He also spent forty years living and teaching New Testament in Egypt, Lebanon, Jerusalem and Cyprus. He is the author of Jesus Through Middle Eastern Eyes (Intervarsity Press); Poet & Peasant (Eerdmans); Through Peasant Eyes (Eerdmans), and Finding the Lost: Cultural Keys to Luke 15 (Concordia). He is a popular contributor to BRF's Guidelines Bible reading notes.