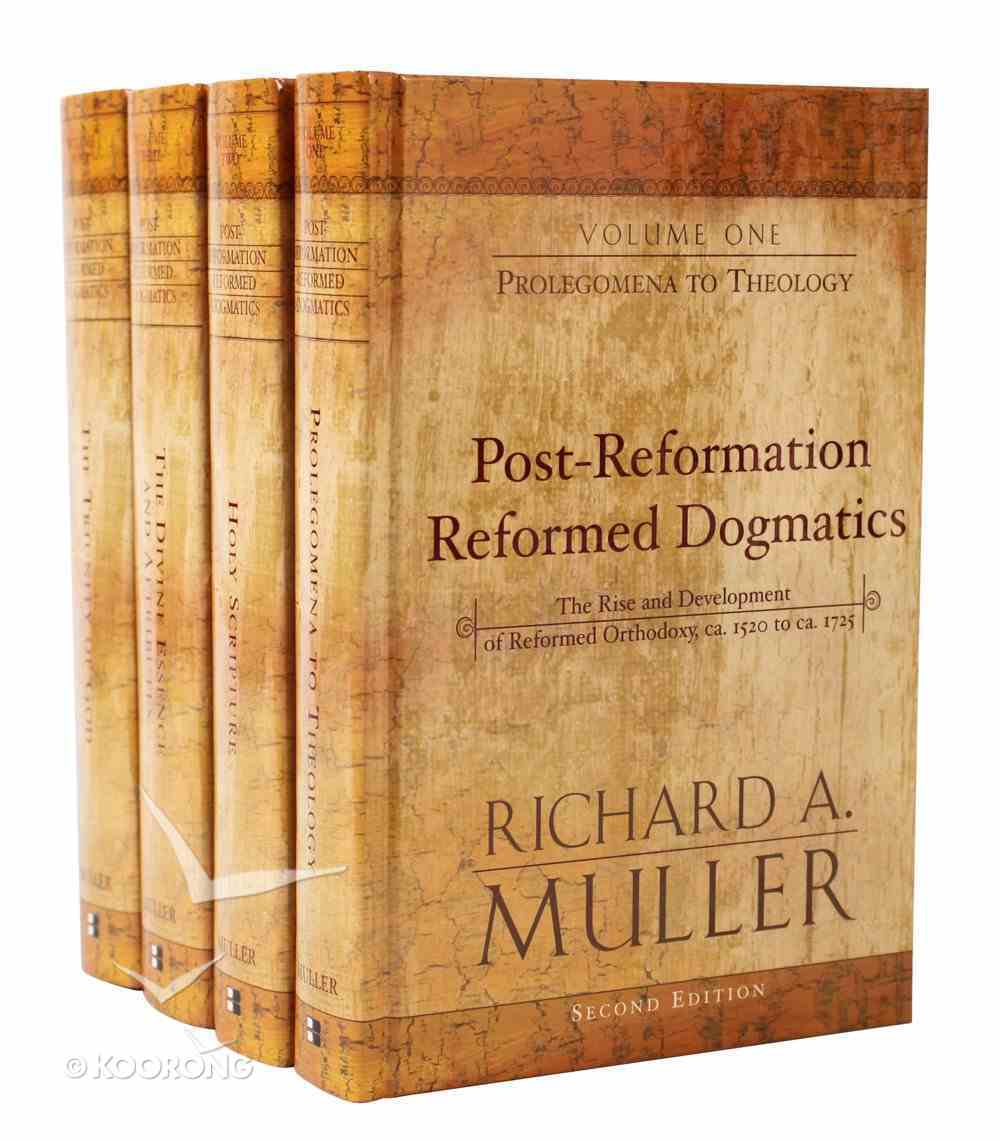 The Rise and Development of Reformed Orthodoxy, ca. 1520 to ca. 1725 Contending that the theology of the sixteenth and seventeenth centuries is often misrepresented in church histories and scholarly treatments, Richard Muller has undertaken this exhaustive study of...

Contending that the theology of the sixteenth and seventeenth centuries is often misrepresented in church histories and scholarly treatments, Richard Muller has undertaken this exhaustive study of specific doctrines to demonstrate how doctrine developed in the early Protestant period.

Volume one, Prolegomena to Theology, introduces the study of Protestant scholasticism. Muller defines theology and religion and discusses several aspects of theology as they were understood in the post-Reformation era, including its divisions, object and genus, and fundamental principles.

Volume two, Holy Scripture, examines post-Reformation understandings of Scripture as the word of God, its divinity, its properties, the integrity of the canon, and its interpretation.

Volume three, The Divine Essence and Attributes, examines post-Reformation theology on the unity of God's existence, God's divine essence and attributes, and divine will. Included is an analysis of the doctrine of God from the twelfth to the early eighteenth century.

Volume four, The Triunity of God, examines the doctrine of the Trinity, including unity and distinction in the Trinity as they were understood in the sixteenth and seventeenth centuries, and addresses the deity and person of God the Father, God the Son, and God the Holy Spirit.

This important historical and theological treatment is now available as both individual volumes and as a complete set. The revised versions of volumes one and two include updated bibliographic references, rearranged chapters and sections, and attractive formatting to match volumes three and four, which are available for the first time. Scholars, students of the Reformation, theological libraries, and devoted Reformed readers will find these volumes indispensable. 2,176 pages, from Baker.

Post-Reformation Reformed Dogmatics examines how specific doctrines of the sixteenth and seventeenth centuries developed and their influence in shaping what we recognize today as the Protestant church. Richard Muller has undertaken this historical study to explain the development of the doctrine of this important period of church history and its ongoing relevance for the church.These four volumes, two of which are available for the first time, examine theological preliminaries, Scripture as the foundation of theology, God's existence, attributes, and nature, and the Trinity. Available individually or as a set, they comprise a significant contribution to scholarship and are essential reading for serious students of the Reformation.
-Publisher

"Richard Muller has gained an international reputation as a brilliant and incisive commentator on John Calvin and the Reformed tradition. But these volumes are something else. With immense erudition and energy, Muller here displays the theology of the Reformed scholastics in relation to the full sweep of the history of Christian doctrine, expounding it on a truly monumental scale. The scholarly community is permanently in his debt. Muller demonstrates that when used with discernment, the long-neglected wealth of Reformed dogmatics can result in the deepening of theological reflection and preaching in the Christian church."-Paul Helm, Regent College, Vancouver"Richard Muller's long-awaited volumes represent a work of vast historical scope, profound engagement with the primary and secondary sources, and careful application of sound historical method. By setting seventeenth-century Reformed theology against the background of classical, patristic, medieval, Renaissance, and Reformation intellectual culture, Muller paints a picture of seventeenth-century Reformed theology that belies the old cliches through its nuance, learning, and sophistication. Nobody engaged in this area can afford to ignore his arguments or his conclusions; those who wish to dissent from his central theses have been set a daunting task, and those who find themselves in agreement have been set a standard for their own research."-Carl R. Trueman, Westminster Theological Seminary"Few periods in the history of Christianity have been as badly neglected or as frequently misrepresented in contemporary theological discussions as the period of Protestant Orthodoxy. Richard Muller has overturned conventional wisdom on the significance of this period and redefined the field through his careful and comprehensive analysis of the primary sources. All future work on the history of Protestant theology from 1550 to 1800 will have to take Muller's studies into account."-David C. Steinmetz, Duke University"The first two volumes of Richard Muller's Post-Reformation Reformed Dogmatics have already established themselves as the starting point for serious study of the development of the theology of Reformed orthodoxy. It is therefore a great pleasure to have at last the final volumes on the doctrine of God along with the second editions of the first two volumes, which have been revised to take account of more recent scholarship and restructured to give greater clarity to the central theses. Post-Reformation Reformed Dogmatics is set to transform scholarship in both Europe and North America."-Willem J. van Asselt, University of Utrecht"Muller's work, here as always, is marked by an unrivaled mastery of the sources displayed with attentiveness to detail and precise expression. As a historian, he is adept at discerning the continuities and contexts of theological traditions as they grow and develop. His approach to the often-maligned Protestant Scholastics is sympathetic and free of the usual caricatures, and if his work is at all iconoclastic, it is only for the sake of defending writers and communities of the past against their later misrepresentations."-John Thompson, Fuller Theological Seminary
-Publisher