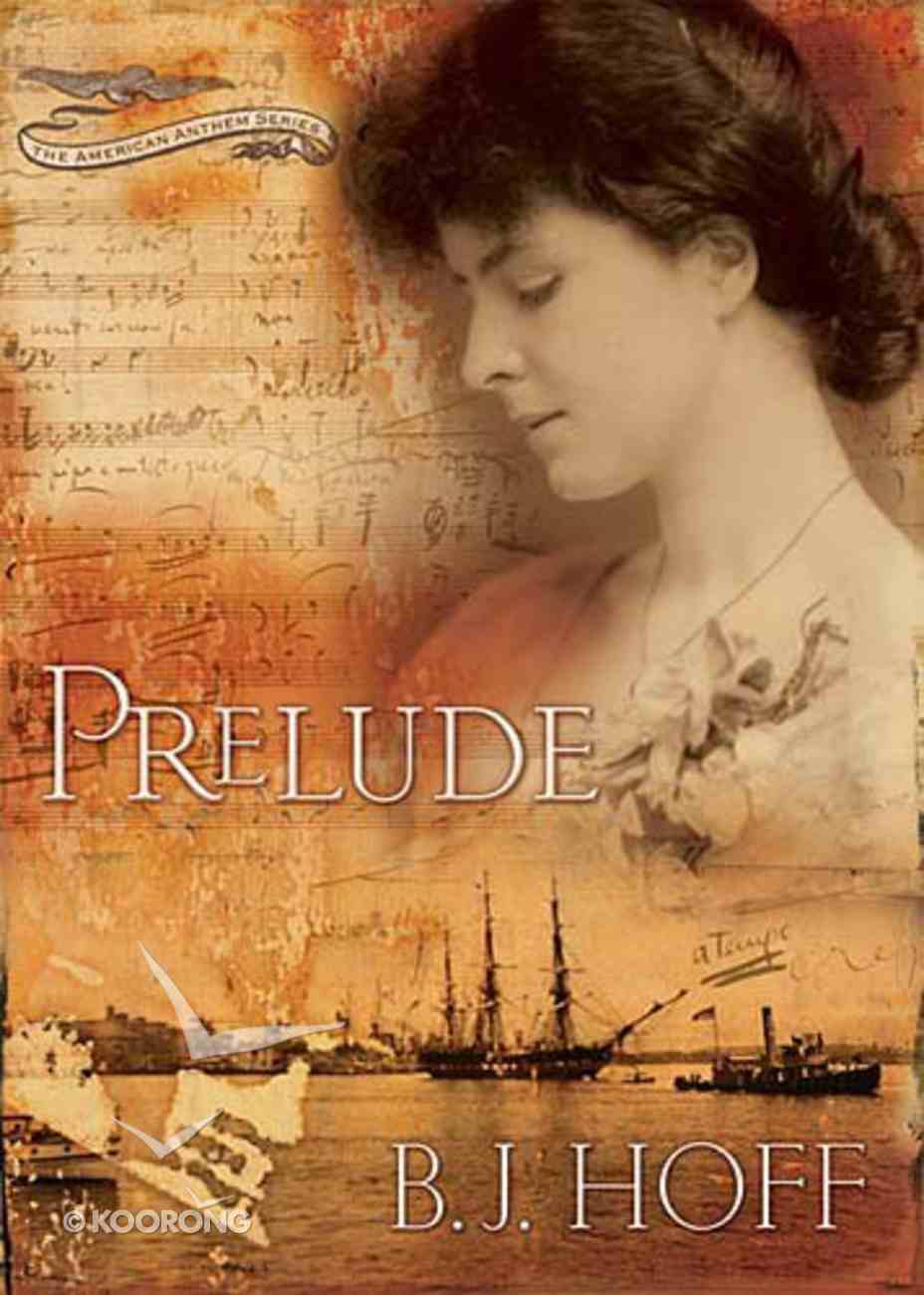 This lively story will transport you to nineteenth century New York. Hoff weaves romance, intrigue, artistry and faith into a compelling novel, full of richly drawn characters and meticulously detailed descriptions of the era.

This lively story will transport you to nineteenth century New York. Hoff weaves romance, intrigue, artistry and faith into a compelling novel, full of richly drawn characters and meticulously detailed descriptions of the era.

B.J. Hoff, one of CBA's premier writers brings this riveting historical fiction series that meticulously depicts nineteenth century America. "Prelude" transports you to nineteenth-century New York and invites you to step into another time--a time that shaped a nation and defined her faith. This lively story carries you from immigrant ships to opulent estates, from skating-rink evangelistic crusades to star-studded concert halls, and introducing you to men and women you'll grow to love: a brooding blind musician, his suspicious but sympathetic sister-in-law, an unlikely pair of medical partners, and a struggling immigrant family. Pulsing with romance and intrigue, shining with artistry and faith, "Prelude" sounds the opening notes of a tale with a voice as big as America.
-Publisher

B. J. Hoff before becoming a full-time writer, she was a church music director and a music teacher. She spent several years writing devotional and gift books before attempting to write fiction. She is the author of Cloth of Heaven, Ashes and Lace, the Emerald Ballad series, the American Anthem series, and the Mountain Song Legacy series. She has received the Critics' Choice Book Award for fiction from Christianity Today as well as numerous Excellence in Media Silver Angel awards. She was also a Gold Medallion Award finalist and is currently a member of the Authors Guild, the Irish American Cultural Institute, and the Appalachian Writers Association. She currently lives in Ohio with her husband.


Was this an ending or a beginning?


Susanna Fallon had asked herself that question countless times since leaving Ireland, and now she was asking it again.


At first light, she had gathered on deck with the other passengers aboard the Spain, all of them eager for the sight of New York. Susanna wished she could believe that the sun rising over the sprawling American city heralded the dawn of an exciting future, a new life with new opportunities. But as the harbor came into view, any hopes she might have held for tomorrow threatened to sink. A flood of doubts rolled over her, vast and unfathomable as the ocean itself.


Susanna pulled her wrap tighter, watching as the ship slowly eased its way toward the pier. Floating garbage and debris littered the water, and she covered her nose and mouth against the stench. At the same time, a small barge angled up alongside them, and she could see an assembly of people thronging the smaller vessel, some waving at the passengers on the deck of the Spain.


"Why, look there, Mother-I believe some of our friends have come to meet us!"


Susanna recognized Mr. Moody's voice and turned to find him and Mrs. Moody, along with their children and the Sankeys, grouped just behind her. Nearby stood Dr. Carmichael, who had traveled to the States with the Moodys as a part of their en-
tourage. Apparently, the Scottish physician had played some role or other in the British Isles crusades, although Susanna had never quite determined exactly what that role was.


The burly, bearded D. L. Moody and his wife were beaming at her, and Susanna attempted a smile in return. "In truth, Mr. Moody, the only thing I'm feeling at the moment is panic."


It struck Susanna that the American evangelist looked nearly as tired as he had when she'd first encountered him upon leaving Liverpool. And small wonder, given the fact that even aboard ship he had been continually attending to the needs of others.


His wife, who seemed to draw from a limitless supply of kindness, patted Susanna on the arm with a gloved hand. "You'll be just fine, dear," she murmured. "You're going to love America, you know. This is a splendid opportunity for you."


"Of course, it is!" Mr. Moody added, his tone enthusiastic. "Now, you did say there will be someone to meet you?"


Susanna nodded uncertainly. "That's what I was told, yes."


Mrs. Moody surprised her by pulling her into a quick embrace. "We're so very glad we met you, Susanna. We'll be praying that everything goes well for you, dear. You're very brave, to come so far on behalf of your niece and brother-in-law. I know the Lord will look afer you."


To her dismay, Susanna felt hot tears sting her eyes. Her chance meeting with the Moodys and the Sankeys had done much to ease her dread of the ocean voyage. Upon learning that she was a young Christian woman traveling alone, both couples had gone out of their way to look after her, inviting her to sit with them at mealtimes, answering her endless questions about the United States, and engaging her in frequent discussions about her own country of Ireland, as well as their common interest in music.


Even before the crossing, Susanna had learned a great deal about Mr. Moody and his "campaigns," as he referred to them. It seemed that the whole of the British Isles had been taken by surprise at the success of the Moody/Sankey meetings, not only in England and Scotland, but also in the heavily Protestant north of Ireland-and in the mostly Catholic south as well.


Susanna had been only one of thousands who had flocked to the early crusades. She could scarcely believe her good fortune a few months later when she found herself aboard the same ship as the American evangelists, who were returning to the States. To have the privilege of spending time with these esteemed spiritual leaders and their families had not only made the voyage less harrowing for her, but had actually given her a number of pleasurable hours.


Only now did the finality of their parting strike her. She was going to miss them greatly.


"I don't know how to thank you," she choked out, "all of you-for your kindness to me. I can't think what the crossing would have been like without you."


"Well, dear, it was awfully good of your brother-in-law to arrange first-class passage for you," said Mrs. Moody. "Other-
wise, we might not have encountered one another at all. And how fortunate for you, to be spared the ordeal of traveling in steerage."


At the thought of the brother-in-law she had never met, Susanna tensed. Mrs. Moody, however, seemed not to notice. "I'm sure we'll see each other again, Susanna. There are plans for Mr. Moody to hold meetings in New York this fall."


"And if that works out," Mr. Moody put in, "we'll expect to see you in the very front row. Until then, you take special care, Miss Fallon, and just remember that your friends the Moodys and the Sankeys will be praying for you."


He paused, then drew a strong, encompassing arm around his wife and motioned that the Sankeys and Dr. Carmichael should move in closer. "In fact, we would like to pray for you right now, before we leave the ship."


And so they did, standing there on deck. Susanna had heard Mr. Moody pray before, of course: at their table before meals, at a shipboard worship service, and during the revival meetings she and her friend, Anna Kearns, had attended at the Exhi-
bition Palace in Dublin. It seemed that when D. L. Moody prayed, he spoke directly with God, whom he obviously knew very well and approached boldly and eagerly, with an almost unheard-of confidence.


But to have this amazing man praying solely for her was an overwhelming experience entirely. By the final Amen, much of the strain that had been weighing on her for weeks seemed to melt away.


Once they disembarked and the Moodys and Sankeys had joined their welcoming party, Susanna's earlier apprehension returned in force.


The harbor was a different world. She found herself unable to move more than a few feet in any direction because of the throngs of people milling about. The noise was almost deafening-a harsh, unintelligible din of a dozen different languages, all flooding the docks at once. The shouts and laughter of sailors and passengers, the cries of greeting and wails of farewell, the pounding of feet on the planks as children ran and shoved their way among the grownups, the occasional blast from a ship's horn-all converged and hammered against Susanna's ears until she thought her head would split.


She stood there in the midst of this bedlam, not quite knowing what to do, fighting off a rising surge of panic. In that moment, she realized with a stark new clarity how utterly alone she was.


A man's voice sounded behind her. "Signorina Fallon?"


Startled, she whipped around as if she'd been struck, ready to defend herself.


"You are Susanna Fallon?" he said.


He was young, with a fairly long, pleasant face and lively eyes behind his spectacles. And he was smiling at her, a wide, good-natured smile. He was also holding a bouquet of flowers and appeared not in the least threatening.


Susanna stared at him. The dark features, the Italian accent-it could be no one else.


But so young! According to Deirdre, Michael Emmanuel ought to be in his mid to late thirties by now. Yet he had called her by name.


He gave his head a vigorous shake. "No, no! I am not Michael. I am Paul Santi, Michael's cousin. I have come to take you home."


Whether it was fatigue or anxiety, Susanna's mind seemed to have gone suddenly dull. "I don't-how did you recognize me? How did you find me?"


"Your hat," he said, gesturing toward Susanna's bonnet. "Did you not write that you would be wearing a hat with blue ribbons?" His smile brightened even more."These are for you," he said, "with Michael's compliments."


He thrust the lavish bouquet into Susanna's hands. "If you will come with me, signorina, we must first go there, to the depot." He pointed to a granite, fortresslike circular building. "Castle Garden," he added. "I will help you with the registration and the paperwork. Michael has already made arrangements for you to be passed through quickly. Do not worry about your luggage-I will take care of it. I have been through this myself, you see. I know exactly what to do."


Susanna glanced across the dock and saw the tall, kindly featured Dr. Carmichael standing there, watching them. For an instant, she was seized by an irrational desire to run toward the man, to flee the solicitude of this dark-eyed foreigner for the pleasant-natured physician and his link to the Moodys.


But she hardly knew Dr. Carmichael any better than she knew this Paul Santi. She must be mad entirely to think of throwing herself at the mercy of a man who was known to her only by his association with the Moodys-themselves strangers until a few days past.


Regaining her wits, she turned back to Paul Santi and, bearing her bouquet and a hard-won sense of determination, managed a careful smile and a civil word as he led her across the docks.