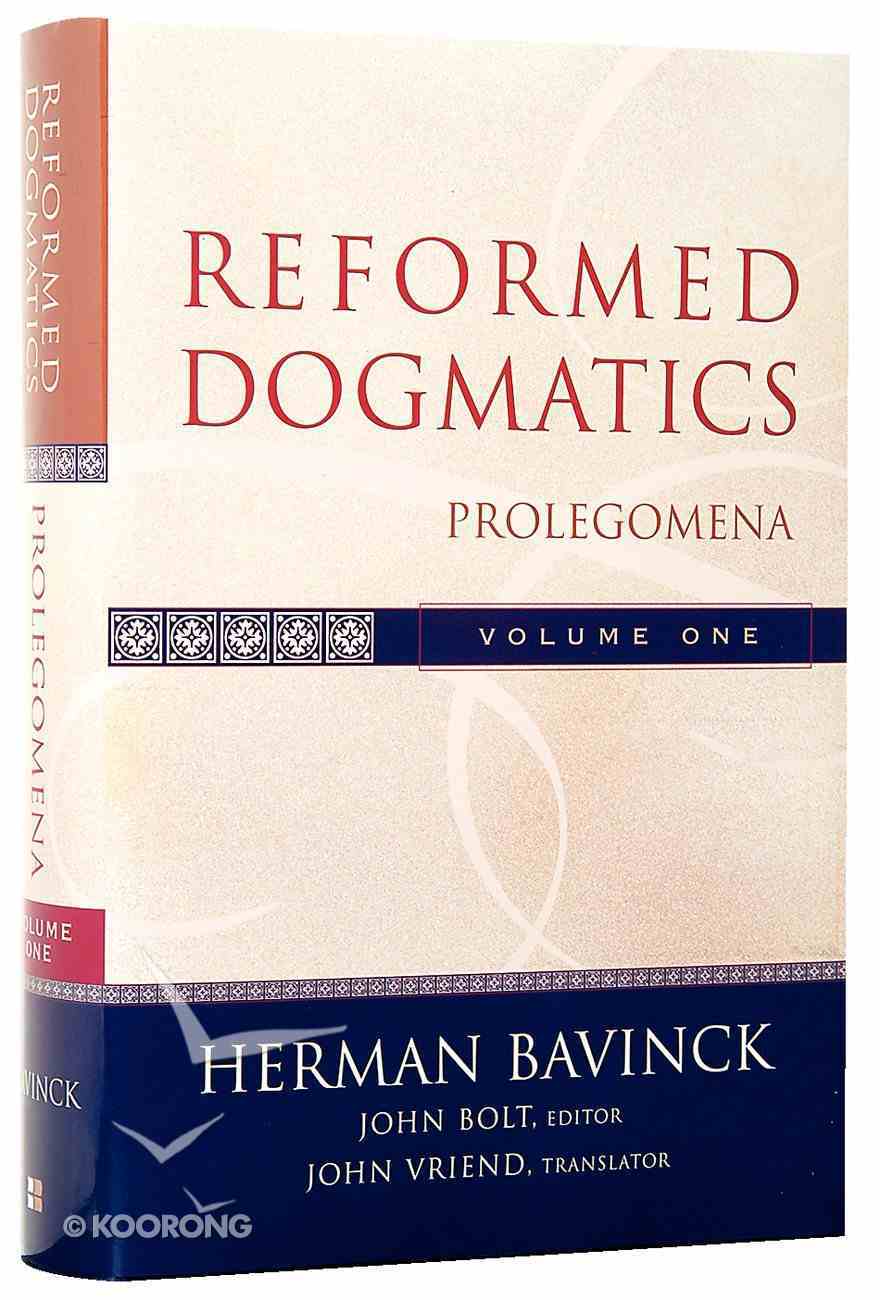 Theologians have long appreciated Herman Bavinck's four-volume masterpiece, GEREFORMEERDE DOGMATIEK, published in 1895-99, for its comprehensive treatment of dogmatic theology. Unfortunately, this magnum opus from the great Reformed theologian has only been available in Dutch, and therefore has been inaccessible...

Theologians have long appreciated Herman Bavinck's four-volume masterpiece, GEREFORMEERDE DOGMATIEK, published in 1895-99, for its comprehensive treatment of dogmatic theology. Unfortunately, this magnum opus from the great Reformed theologian has only been available in Dutch, and therefore has been inaccessible to most readers. Now, thanks to the Dutch Reformed Translation Society and the work of translator John Vriend and editor John Bolt, the first volume of Bavinck's magisterial REFORMED DOGMATICS is available in English for the first time. Bolt's tireless work updating the documentation augments this significant work.

The seventeen chapters of this volume are grouped into sections: Introduction to Dogmatics, The History and Literature of Dogmatics, Foundations of Dogmatic Theology, Revelation, and Faith. Bavinck's approach throughout is meticulous, though he wears his vast learning lightly. As he moves throughout the subject of dogmatic theology, he stands on the shoulders of giants such as Augustine, John Calvin, Francis Turretin, and Charles Hodge.

Editor John Bolt characterizes the work as follows: "Reformed Dogmatics is biblically and confessionally faithful, pastorally sensitive, challenging, and still relevant. Bavinck's life and thought reflect a serious effort to be pious, orthodox, and thoroughly contemporary. To pietists fearful of the modern world on one hand and to critics of orthodoxy skeptical about its continuing relevance on the other, Bavinck's example suggests a model answer: an engaging Trinitarian vision of Christian discipleship in God's world."

This masterwork will appeal to scholars and students of theology, research and theological libraries, and pastors and laity who read serious works of Reformed theology.

In partnership with the Dutch Reformed Translation Society, Baker Academic is proud to offer the first volume of Herman Bavinck's complete Reformed Dogmatics in English for the very first time. Bavinck's approach throughout is meticulous. As he discusses the standard topics of dogmatic theology, he stands on the shoulders of giants such as Augustine, John Calvin, Francis Turretin, and Charles Hodge. This masterwork will appeal to scholars and students of theology, research and theological libraries, and pastors and laity who read serious works of Reformed theology.
-Publisher

"A welcome addition to the works of Bavinck in English. Of special interest is Bavinck''s insightful critique of the role of apologetics in establishing certainty in faith."--Donald G. Bloesch, emeritus professor of theology, University of Dubuque Theological Seminary"Herman Bavinck has often been unjustly overshadowed by Abraham Kuyper, especially in the English-speaking world. The unavailability in English of his crowning work, Gereformeerde Dogmatiek, has been a particularly significant lack. Bavinck''s breadth, thoroughness, rigor, ecumenical interests, and spiritual fervor are clearly on display in this careful and readable translation. It is a splendid gift to theological studies and will contribute to redressing the neglect of this faithful servant of Christ and his church."--Stephen R. Spencer, Wheaton College"What a wonderful gift to the English-speaking theological world! The topics explored by Bavinck are still of the utmost importance, and he addresses them here in a theological voice that is amazingly fresh. I pray that the appearance of this volume signals the beginnings of a Bavinck revival!"--Richard J. Mouw, president, Fuller Theological Seminary"Finally Bavinck becomes available to the English-speaking world. The Dutch version has been a constant stimulus for students, pastors, and other interested Christians. It has shaped generations of theologians and helped them to preach, think, and act on a fresh, Reformed basis. The strength of Bavinck''s Dogmatics is that it''s neither conservative nor progressive, but its biblical character makes it constantly up-to-date. Baker and the Dutch Reformed Translation Society deserve praise for this project, from which without doubt church and theology will profit for years to come."--Herman Selderhuis, Theologische Universiteit Appeldoorn"Those interested in Reformed theology will welcome with open arms Bavinck''s Reformed Dogmatics. Bavinck is one of the premier Reformed theologians, but till now much of his magnum opus has not been accessible to English-language readers. We owe a great debt of gratitude to those who have made the treasures of Bavinck''s thought available to a new world of appreciative hearers."-Donald K. McKim, editor, Encyclopedia of the Reformed Faith"Bavinck''s Reformed Dogmatics has been the fountainhead of Reformed theology for the last hundred years. It is by far the most profound and comprehensive Reformed systematic theology of the twentieth century. The reader will be amazed by Bavinck''s erudition, creativity, and balance. Bavinck is confessionally orthodox, but he recognizes the need to rethink the traditional formulations from Scripture in the context of contemporary discussion. I hope it will have a large readership and will bring forth much theological and spiritual fruit."--John M. Frame, professor of systematic theology and philosophy, Reformed Theological Seminary"This is one of those seminal works that embodies a significant portion of our Reformed theological heritage. We all should rejoice to see this material finally available in English!"--Samuel T. Logan Jr., Westminster Theological Seminary"Bavinck''s Reformed Dogmatics continues to be the standard of modern orthodox dogmatics in the Reformed tradition. It not only is encompassing in content but also shows everywhere a profound insight into the basic problems that a Reformed theology has to face and a deep sensitivity for modern culture. The combination of both made his work famous, and studying his work fruitful also for a new generation."--Cornelis van der Kooi, Free University, Amsterdam"Despite all the important contributions that Dutch Calvinists have made to North American Protestantism, Herman Bavinck remains an obscure figure, lagging behind the influential Abraham Kuyper. With the translation and republication of Bavinck''s Reformed Dogmatics, this unfortunate situation should change for the better. These four volumes demonstrate the importance and mastery of Bavinck''s own contrib
-Publisher