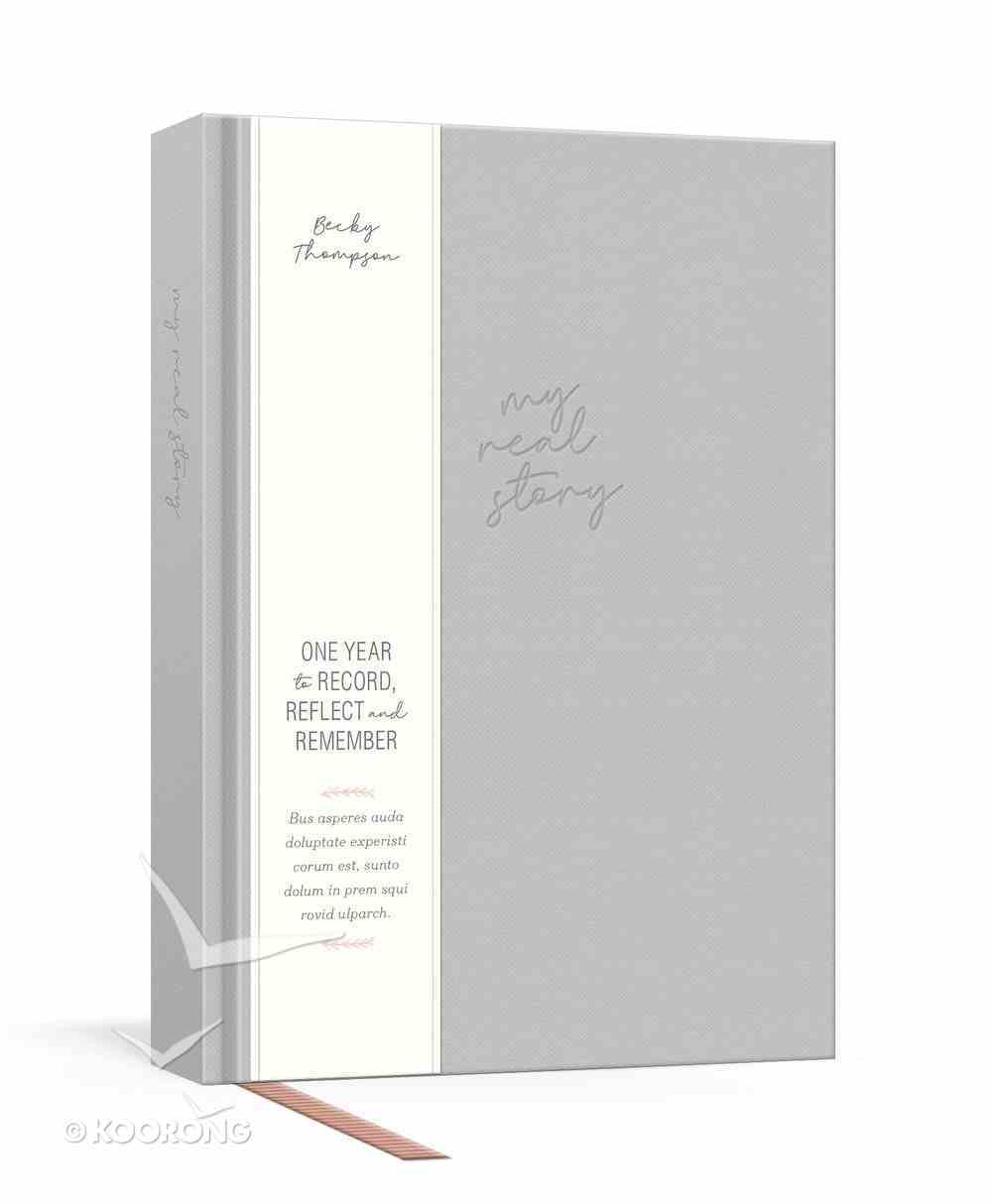 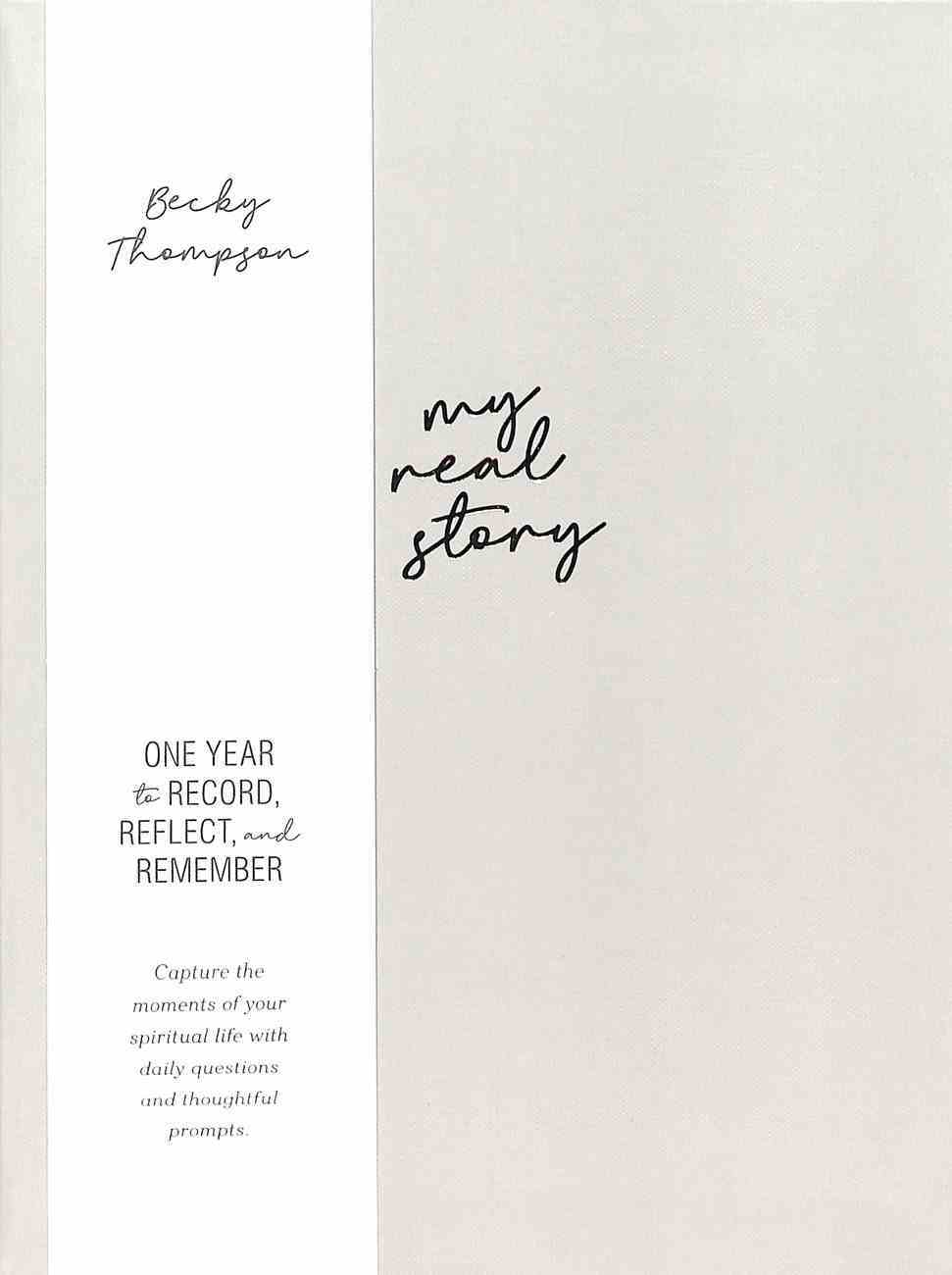 Prompted Journal: My Real Story: One Year to Record, Reflect, and Remember

:What if you were able to recognise the story that God was writing in your life as you were living it? A popular blogger to millions of women helps you answer that question for yourself, as you create a unique...

Notebook Journal: Beautiful Heart, a With Elastic Closure
Flexi Back

Journal: On This Christmas - a Five-Year Journal of Your Favorite Christmas Traditions, Memories and Gifts
Zondervan
Hardback

:What if you were able to recognise the story that God was writing in your life as you were living it? A popular blogger to millions of women helps you answer that question for yourself, as you create a unique keepsake journal.

Becky Thompson invites you to reflect on your own spiritual journey. With mini-devotions from Becky, artistic scripture verses, personalised prayers, reflection pages, and spaces where you can record those moments you don't want to forget, My Real Story will encourage you to look back through the different seasons in your life in order to capture the heart of who you are in Christ.
-Publisher

Becky Thompson is the author of Scissortail SILK, a blog that draws a global audience of millions. Speaking to the often overlooked struggle of balancing life as a wife, mother, and daughter of God, Becky has a captivating way of becoming the voice for women in need of hope, healing, and the Father's love. Becky's candid way of sharing her heart extends an unspoken invitation for women to feel as though they have gained a friend and realize that somewhere there is a woman who feels just like they do.

It was windy that night. I&rsquo;m not sure how windy; Scripture doesn&rsquo;t say. It just says the boat was already some distance from land, battered by the waves because the wind was against it.

You know this story from Matthew 14:22&ndash;33. It&rsquo;s the one where Jesus (and Peter) walked on water. Jesus&rsquo;s disciples were in a boat crossing to the other side of the lake when Jesus caught up to them by walking on the water.

At first His friends thought He was a ghost, but when Jesus called out to them, Peter recognized His voice and answered, &ldquo;Lord, if it&rsquo;s you, tell me to come to you on the water.&rdquo;

And Peter climbed out of the boat and began walking to Jesus. Peter was okay until he took his eyes off &#160;the Lord, noticed the waves, and began to sink. Desperate, Peter cried out, &ldquo;Lord! Save me!&rdquo;

Scripture says that Jesus reached out and caught him.

Have you ever really considered what it must have been like to be standing next to Jesus one moment and neck deep in water the next? (Maybe you feel like that now.) I wish Scripture were clearer about what happened next. But this is what I imagine took place. I don&rsquo;t think Jesus and Peter swam back to the boat. I don&rsquo;t think Jesus walked on the water while dragging Peter by his arm. Can you even imagine how ridiculous that would have been?

Instead, I think Jesus lifted Peter up out of the water and they walked back to the boat together. I think Peter climbed into the&#160;boat wet . . . and I believe he never forgot the importance of having someone reach down and pull him up.

Sometime later&mdash;after Jesus went to heaven&mdash;Peter and John went to the temple to pray. Scripture says,&#160;

As they approached the Temple, a man lame from birth was being carried in.... When he saw Peter and John about to enter, he asked them for some money.

Peter and John looked at him intently, and Peter said, &ldquo;Look at us!&rdquo; The lame man looked at them eagerly, expecting some money. But Peter said, &ldquo;I don&rsquo;t have any silver or gold for you. But I&rsquo;ll give you what I have. In the name of Jesus Christ the Nazarene, get up and walk!&rdquo;

Then Peter took the lame man by the right hand and helped him up. And as he did, the man&rsquo;s feet and ankles were instantly healed and strengthened. He jumped up, stood on his feet, and began to walk! Then, walking, leaping, and praising God, he went into the Temple with them. (Acts 3:2&ndash;8, NLT)

I wonder if Peter remembered that night in the water with Jesus as he stood over the crippled man. I wonder if he thought of how Jesus had stood over him in the same way. I wonder if he saw himself in the face of that man. And I wonder if the moment Peter reached down and extended his arm to lift him to his feet, he felt the power of God moving through his hand the same way Jesus did when lifting Peter.

There is something powerful that happens when you encounter God in a certain way, when you have the opportunity to experience Jesus as the One who will stand over you and pull you from the water that tries to drown you. In that moment you learn how to do something you wouldn&rsquo;t otherwise know. You learn how to pull others to their feet and navigate them through troubled waters.&#160;

When Peter was sinking, he didn&rsquo;t shout, &ldquo;This is going to make a great story someday!&rdquo; He just shouted, &ldquo;Lord, save me!&rdquo; Yet Peter&rsquo;s story is told over and over again to teach us, inspire us, and help us to better understand our Lord.

So here&rsquo;s my question: What if we were able to recognize the story that God was writing in our lives as we were living it? When life is difficult and we are struggling, we usually don&rsquo;t think about the people we will be able to help through the story of how God rescued us. It can be hard to remember that there is purpose woven throughout every moment of our lives. Not just purpose for us but purpose for others as well. What thoughts or memories or circumstances would you record if you knew that someday someone was going to need to hear how God brought you through this time? What would you want to document? What would you want to remember? What would you want to say to someone who is about to walk through a similar season or situation?

What is the real story of this season?

Your answers to the questions on the pages ahead will be unique to you. They likely will be different in this season than they would have been in seasons past or would be in those to come. Your story is continuously being written, so it&rsquo;s important that you document it. Recording and then revisiting your real story will remind you of what God has done. It will open your eyes to what He is currently doing, and it will prepare you to share with others what He can do for them.

You have lived a story. You are living a story. And you have a story to tell. Take notes, friend.

Spiral Journal: Do What Makes Your Heart Sing
Spiral

Lux Journal: Many Are the Plans, Proverbs 19:21
Imitation Leather

Iridescent Pearl Journal: Turquoise, I Can Do, Philippians 4:13
Flexi Back

Lux Journal: You Are Worth More Than Many Sparrows
Imitation Leather