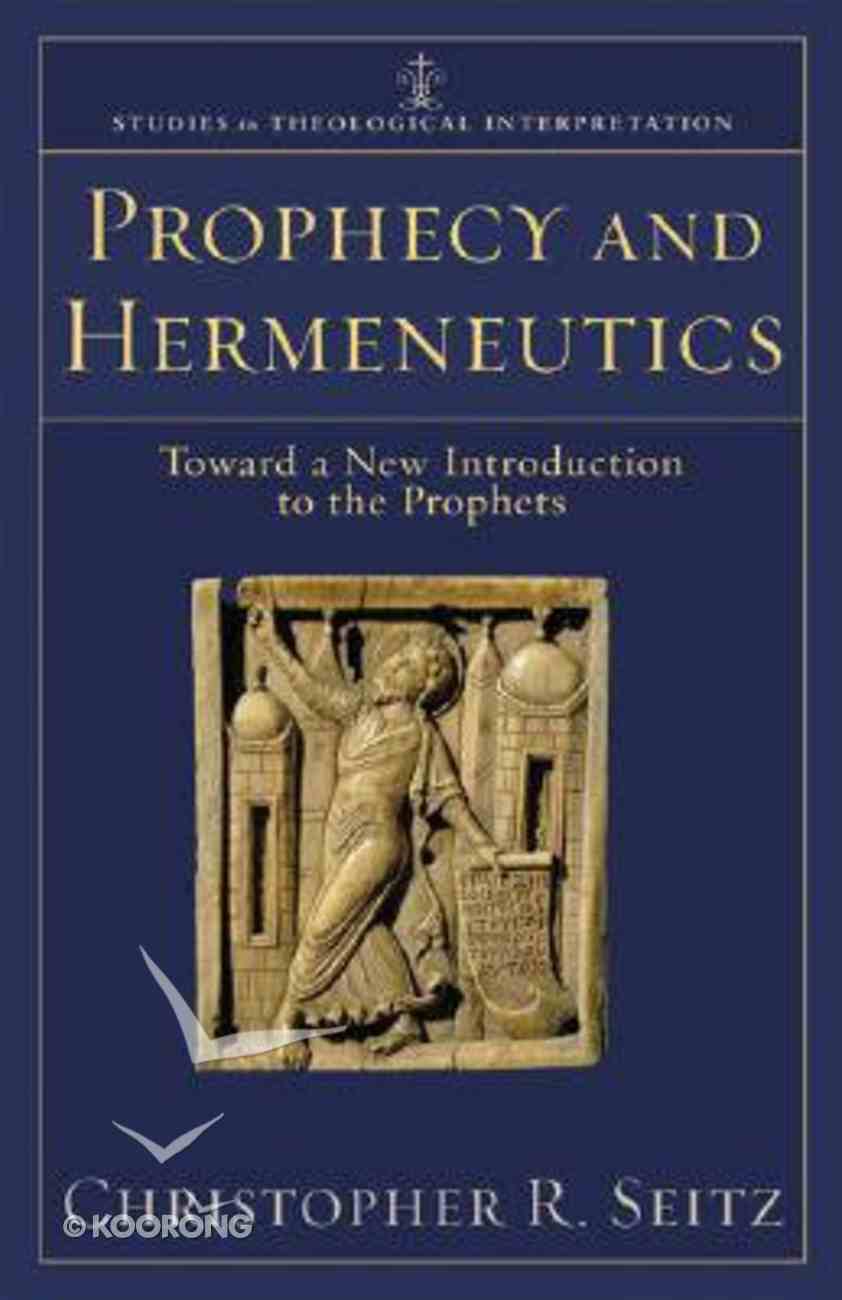 A fresh wave of studies on the prophets has appeared in recent years. Old Testament scholar Christopher R. Seitz has written Prophecy and Hermeneutics as a way of revisiting, from the ground floor up, what gave rise to studies of...

The Beginner's Guide to the Gift of Prophecy
Jack Deere
eBook

A fresh wave of studies on the prophets has appeared in recent years. Old Testament scholar Christopher R. Seitz has written Prophecy and Hermeneutics as a way of revisiting, from the ground floor up, what gave rise to studies of the prophets in our modern period. In addition, Seitz clearly shows that a new conceptuality of prophecy, hermeneutics, history, and time is needed???one that is appropriate to current views on Isaiah and the Twelve. Scholars, students, professors, and theological libraries will find this an essential foundational resource.
-Publisher

"Chris Seitz is one of the most insightful and creative biblical theologians working in the field today. In this book he shows us how traditional historical-critical readings have brought us to an impasse and then marks out a bold new path with his own proposal to take the canonical form of prophetic literature seriously. No one will look at the prophetic corpus in the same way after being tutored by Seitz."--Gary Anderson, professor of Old Testament/Hebrew Bible, University of Notre Dame"It is rare when reviewing a book to recognize that a profound paradigm shift is being proposed that deeply affects how the Old Testament prophets are to be understood. Building on over two decades of probing, critical exegesis, Christopher Seitz now offers a magisterial overview of the entire field and outlines a new and brilliant hermeneutical synthesis of biblical prophecy that restores the centrality of the canonical Scriptures to the church."--Brevard S. Childs, Sterling Professor of Divinity, emeritus, Yale University Divinity School"Building on the long history of prophetic introduction and interpretation, Seitz offers a new way of viewing the prophets. He takes the realities of time and history with utmost seriousness but also attends to the hermeneutical implications of the present form of the prophetic books. The future of theological interpretation of Scripture depends on such breakthroughs as Seitz offers in these pages. We will have to read the prophets differently henceforth."--Patrick D. Miller, Charles T. Haley Professor of Old Testament Theology emeritus, Princeton Theological Seminary"Seitz has offered a fresh and bold proposal for understanding the formation and theological significance of prophetic literature. In rich dialogue with Gerhard von Rad and building on recent scholarly research devoted to the Book of the Twelve, Seitz discerns a process of 'figural integration' in prophetic literature. Prophetic words were, in his judgment, fulfilled, not in some simplistic fashion, but over the course of time and, ultimately, in the New Testament. All those interested in prophetic literature and the character of Scripture will find this volume both challenging and useful."--David L. Petersen, professor of Old Testament, Emory University"This is a highly interesting book. Christopher Seitz has long followed in the footsteps of Gerhard von Rad. Now he is taking a further step: beyond tradition-history toward the final, canonical form of the biblical text. He deals with the problems involved and demonstrates this new approach utilizing the prophetic literature, in particular the Book of the Twelve. He shows in detail how historical questions about the different books within the Twelve are useful and even necessary but that they must finally move into an understanding of the text in its final form. Therefore he calls his approach 'canonical-historical.' It can be expected that this book will cause a vivid methodological discussion."--Rolf Rendtorff, emeritus professor of Old Testament, Heidelberg University
-Publisher

Christopher R. Seitz (Ph.D., Yale University) is professor of biblical interpretation at Wycliffe College, University of Toronto, in Toronto, Ontario. He previously taught at the University of St. Andrews and Yale University. He is the author or editor of twelve books including Figured Out: Typology, Providence and Christian Scripture; Nicene Christianity The Future for a New Ecumenism; Goodly Fellowship of the Prophets, The: The Achievement of Association in Canon Formation; Isaiah 1-39 (Interpretation Bible Commentaries) and most recently Colossians (Brazos Theological Commentary on the Bible).

Messiah in the Feasts of Israel (Handbook)
Sam Nadler
Paperback