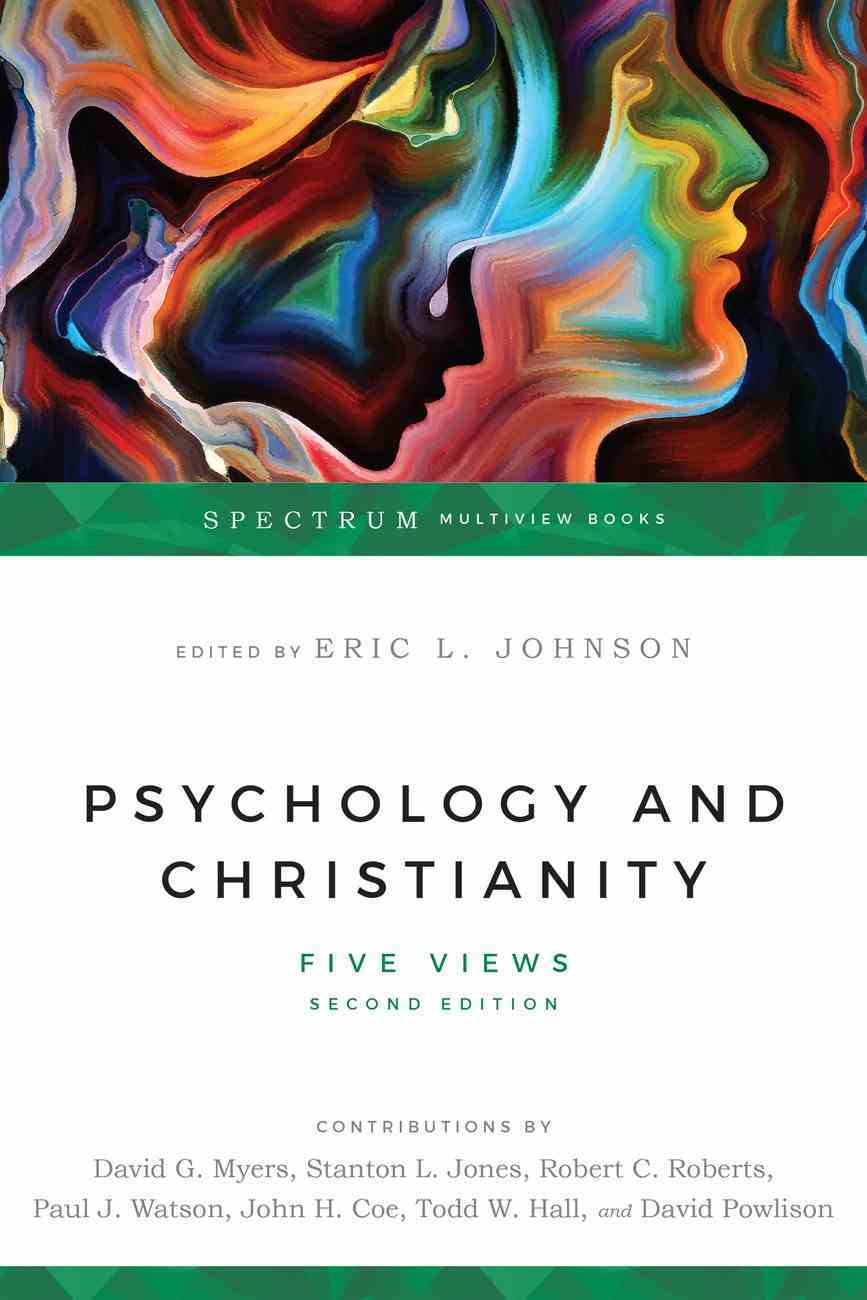 How are Christians to understand and undertake the discipline of psychology? This question has been of keen interest (and sometimes concern) to Christians because of the importance we place on a correct understanding of human nature. Psychology can sometimes seem disconnected from, if not antithetical to, Christian perspectives on life. How are we to understand our Christian beliefs about persons in relation to secular psychological beliefs? This revised edition of a widely appreciated Spectrum volume now presents five models for understanding the relationship between psychology and Christianity. All the essays and responses have been reworked and updated with some new contributors including the addition of a new perspective, the transformative view from John Coe and Todd Hall (Biola University). Also found here is David Powlison (Westminster Theological Seminary) who offers the biblical counseling model. The levels-of-explanation model is advanced by David G. Myers (Hope College), while Stanton L. Jones (Wheaton College) offers an entirely new chapter presenting the integration model. The Christian psychology model is put forth by Robert C. Roberts (Baylor University) now joined by Paul J. Watson (University of Tennesee, Chattanooga). Each of the contributors responds to the other essayists, noting points of agreement as well as problems they see. Eric L. Johnson provides a revised introduction that describes the history of Christians and psychology, as well as a conclusion that considers what might unite the five views and how a reader might evaluate the relative strengths and weaknesses of each view. Psychology and Christianity: Five Views has become a standard introductory textbook for students and professors of Christian psychology. This revision promises to keep it so. Spectrum Multiview Books offer a range of viewpoints on contested topics within Christianity, giving contributors the opportunity to present their position and also respond to others in this dynamic publishing format.

Todd W. Hall (Ph.D., Biola University, Doctoral specialization, University of California--Los Angeles) is director of the Institute for Research on Psychology and Spirituality, associate professor of psychology, and editor of the Journal of Psychology and Theology at Biola University. He is also the president of Alidade Research (alidaderesearch.com), a research and organizational development consulting firm. Hall developed the Furnishing the Soul Inventory, one of the most widely used measures of Christian spirituality among Christian colleges, Bible institutes and secondary schools in North America. He speaks and consults regularly on spiritual transformation, leadership and organizational development to Christian schools, nonprofits, businesses and churches around the country.Having conducted research on spiritual transformation for over fifteen years, Hall has published extensively on the topic in journals such as the Journal for the Scientific Study of Religion; International Journal for the Psychology of Religion; Journal of Psychology and Theology; Journal of Psychology and Christianity and Mental Health, Culture and Religion. He is also the author of Spiritual Formation, Counseling and Psychotherapy (Nova Science, 2004).

David G. Myers (Ph.D., University of Iowa) is professor of psychology at Hope College. He is best known for his widely adopted texts on introductory psychology and social psychology. He had published widely in professional journals and is the recipient of the Gordon Allport Prize for research studies of group influence. David has digested psychological research for the public through articles in more than three dozen magazines, from Scientific American to Christian Century, and through fifteen books, including general interest books and textbooks. His latest books are The Pursuit of Happiness: Who Is Happy and Why (William Morrow); Intuition: Its Powers and Perils (Yale); The American Paradox: Spiritual Hunger in an Age of Plenty (Yale)What God has joined together (HarperSanFrancisco) and A Friendly Letetr to Young Atheists (HarperSanFrancisco)
Koorong -Editorial Review.

Stanton L. Jones (Ph.D. in clinical psychology from Arizona State University) is provost and professor of psychology at Wheaton College in Wheaton, Illinois. During his tenure as chair of the psychology department (1984-1996), he led the development of Wheaton's Doctor of Psychology program in clinical psychology. He is a member of the American Psychological Association and served on the Council of Representatives, the central governing body of the APA, representing the Psychology of Religion division from 1999 to 2001. In 1994 he was named a Research Fellow of the Evangelical Scholars Program of the Pew Foundation. He was a Visiting Scholar at the Divinity School of the University of Cambridge and a Visiting Fellow at Clare Hall, University of Cambridge, for the 1995-1996 academic year. Jones authored the lead article, "Religion and Psychology," for the Encyclopedia of Psychology, jointly published in 2000 by the American Psychological Association and Oxford University Press. Jones has also written, with his wife, Brenna, a five-book series on sex education in the Christian family called God's Design for Sex. He is also the co-author of Modern Psychotherapies (with Richard E. Butman) and Homosexuality: The Use of Scientific Research in the Church's Moral Debate and Ex-gays? :A Longitudinal Study of Religiously Mediated Change in Sexual Orientation (with Mark A. Yarhouse) and editor of Psychology and Christianity: Five Views. He has published many other professional and popular articles and chapters.

Robert C. Roberts (Ph.D., Yale) is distinguished professor of ethics at Baylor University in Waco, Texas. He was formerly professor of philosophy and psychological studies at Wheaton College, where he worked on integration aspects of clinical psychology. Author of numerous books and articles, he is currently completing a volume on the moral psychology of emotions.He has written or edited eleven books, and is currently working on the sequel to his 2003 book on emotions. During his time at Baylor, Roberts has continued his work in virtue ethics, and began critical new work in virtue epistemology. Some of his publications include The Strengths of a Christian (Westminster Press); Emotions: An Essay in Aid of Moral Psychology (Cambridge University Press); Spiritual Emotions: Reflections in Christian Ethics (Eerdmans Publishing Company); and Intellectual Virtues: An Essay in Regulative Epistemology, with Jay Wood (Oxford University Press).

Darkness is My Only Companion: A Christian Response to Mental Illness (2nd Ed)
Kathryn Greene-mccreight
Paperback

What Do You Think of Me? Why Do I Care?
Edward T Welch
Paperback