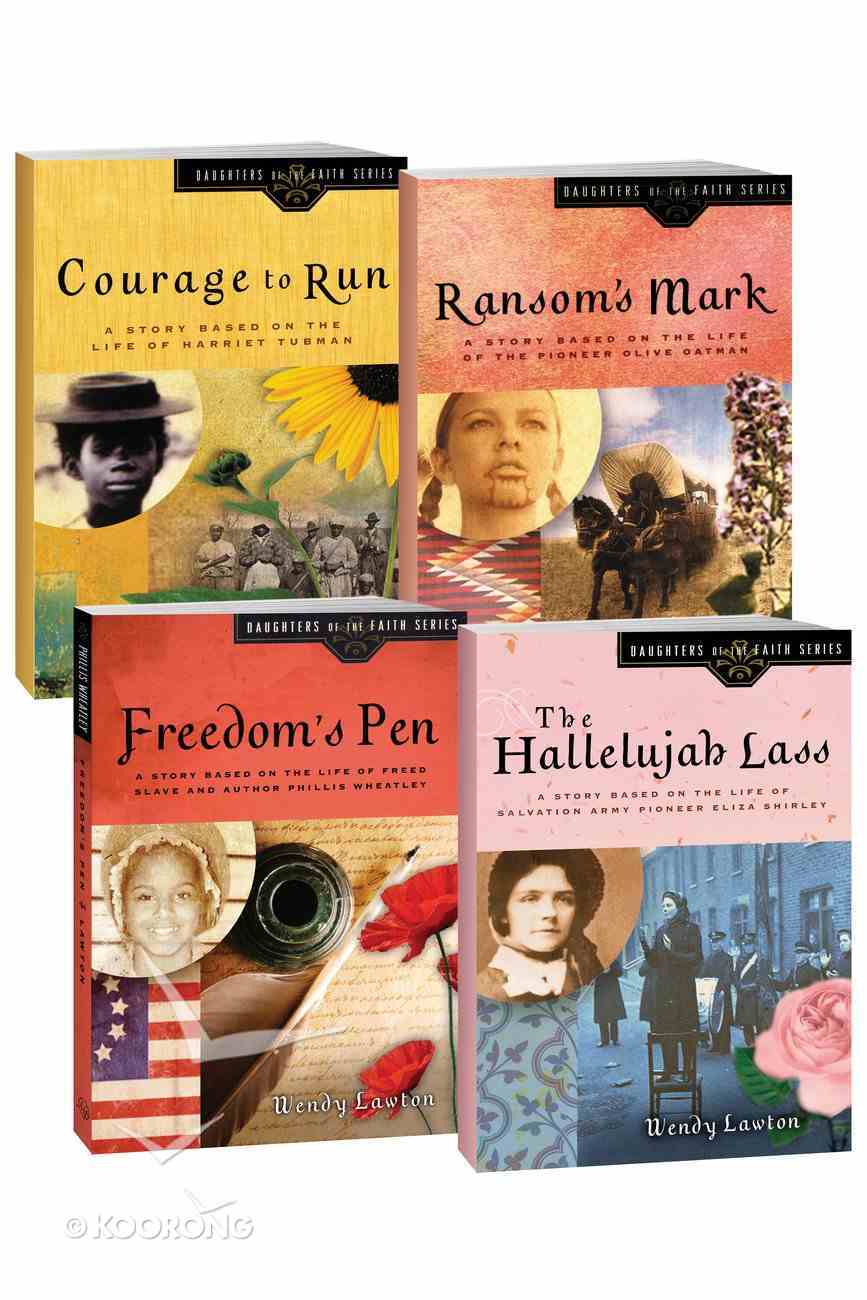 Out of Print. Limited Availability
Expected to ship within 4 hours from Australia.
Learn More
Free Shipping
for orders over $99.

This package (set 1) includes four books from the Daughters of Faith series: Freedom's Pen, Courage to Run, The Hallelujah Lass, and Ransom's Mark.

The Daughters of the Faith series, which has sold more than 120,000 copies, is unique to other biographies for children in that the stories are not about the whole lives of significant women in history; they are about the childhood of these women, inspiring young readers to make a real difference even in their youth.


Freedom's Pen tells the story of little Phillis Wheatley, who didn't let her circumstances as a slave in America keep her from accomplishing great things.

Courage to Run tells the story of Harriet Tubman, a woman who was born a slave but went on to lead more than 300 people out of slavery through the Underground Railroad.

The Hallelujah Lass tells the story of Eliza Shirley, a 16-year-old girl who traveled from England to pioneer the work of the Salvation Army in the United States.

Ransom's Mark tells the story of 13-year-old Olive Oatman and her sisters, who got captured by outlaw Yavapai Indians, were ransomed by a band of Mohaves, and found unexpected comfort amid that people.

This package includes four books of the Daughters of Faith Series Set 2: Freedom's Pen, Courage to Run, The Hallelujah Lass, and Ransom's Mark.

There are a few elements of the Daughters of Faith Series that separate it from many other children's book biographies. First, these books are about little girls. They are not biographies of the entire life of these characters- these are stories about girls who made a difference while they were still young. This enables the young girl readers to relate to the characters more than they would if these characters had to wait until they were thirty or forty before doing anything significant. Second, these stories are faith journeys. Lawton gets inside the minds of these girls in order to portray their struggles to make God an active part of their lives.

In Freedom's Pen, Phillis Wheatley was a little girl of seven or eight years old when she was captured in Gambia and brought to America as a slave in 1761. But she didn't let her circumstances keep her down. She learned to read and write in English and Latin, and showed a natural gift for poetry. By the time she was twelve, her elegy at the death of the great pastor George Whitefield brought her worldwide acclaim. Phillis became known to heads of state, including George Washington himself, speaking out for American independence and the end of slavery. She became the first African American to publish a book, and her writings would eventually win her freedom. More importantly, her poetry still proclaims Christ almost 250 years later.

In Courage to Run, Harriet Tubman was born a slave on a Maryland plantation in the 1800's. She trusts in God, but her faith is tested at every turn. Should she obey her masters or listen to her conscience? This story from Harriet's childhood is a record of courage. Even more, it's the story of God's faithfulness as He prepares her for her adult calling to lead more than 300 people out of slavery through the Underground Railroad.

In The Hallelujah Lass, Lawton tells the story of Eliza Shirley, a 16-year-old girl who traveled from England to pioneer the work of the Salvation Army in the United States. As a teenager growing up in nineteenth-century England, Eliza was the picture of a proper young lady. But she longed for more than an ordinary, middle-class life. When a group of Hallelujah Lassies marches into Coventry with a ragtag bunch of followers, singing and banging tabourines, even ensuing riots cannot keep Eliza away. She knows, at last, that this is the work God has prepared for her. And she is ready, no matter what the cost.

In Ransom's Mark, when 13-year-old Olive Oatman's wagon train is raided by outlaw Yavapai Indians, she and her sister are captured. After enduring harsh treatment, they are ransomed by a band of Mohaves. Olive struggles to adjust to her new life, but finds comfort in her faith and in an unexpected friendship. When the time comes for her to return to the white world, she is afraid she will never fit in. But she learns to see the Mohave design tattooed on her chin as a sign of God's love and deliverence, a mark of ransom.