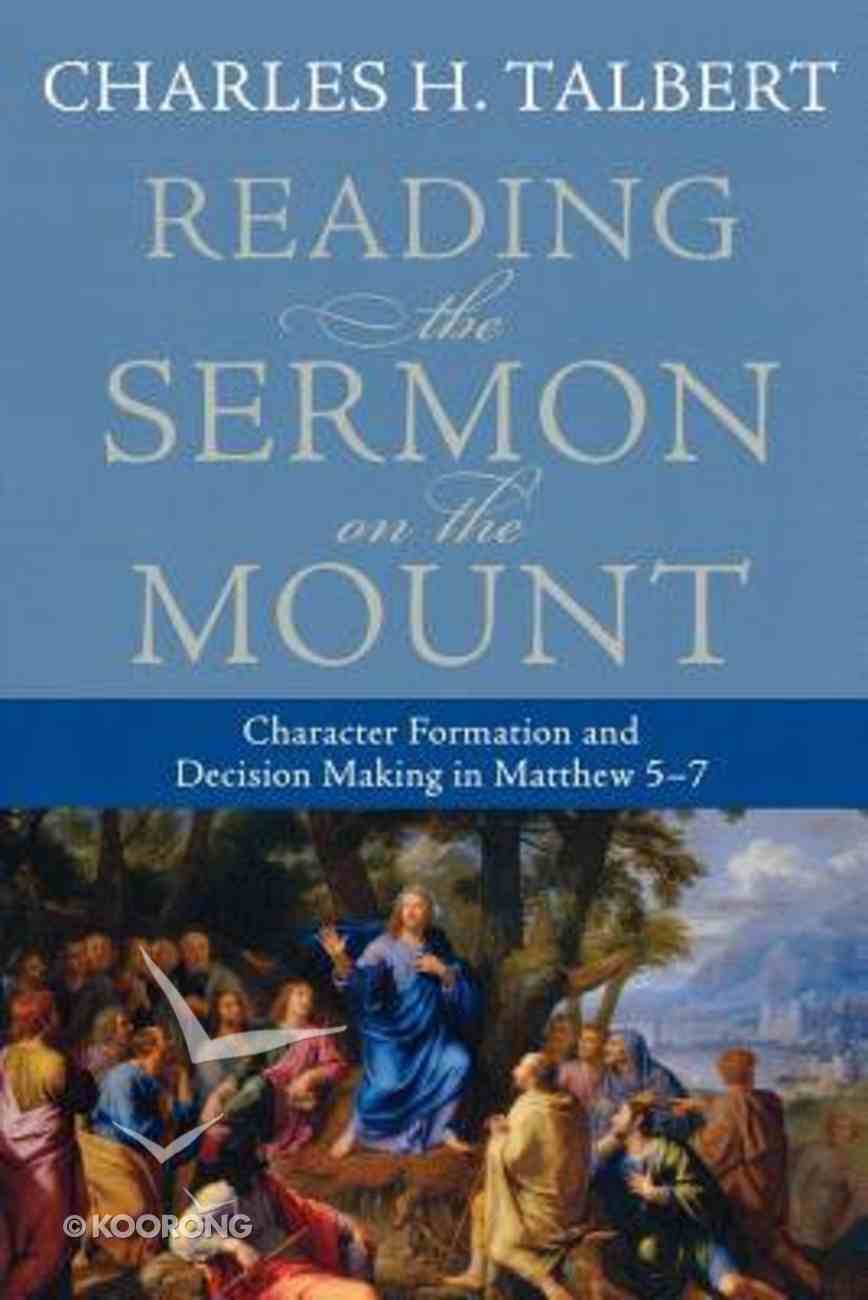 Reading the Sermon on the Mount

"Turn the other cheek"; "Love your enemies"; "Pray in secret"; "Do not store up for yourselves treasure on earth"; "Do not worry." These are just a few of the famous dictums found in the Sermon on the Mount. But what...

Sermon on the Mount, the - the Message of the Kingdom (ESV Edition) (Preaching The Word Series)
Kent R Hughes
Hardback

"Turn the other cheek"; "Love your enemies"; "Pray in secret"; "Do not store up for yourselves treasure on earth"; "Do not worry." These are just a few of the famous dictums found in the Sermon on the Mount. But what is the primary purpose of the Sermon?

Most interpretations treat the Sermon as an ethical text--concerned about the way Christians behave. Charles Talbert, however, argues that it is more concerned with character formation and ethical decision making. He argues that it is a text about covenant fidelity to God and to other humans, in which Jesus seeks to affect perceptions, dispositions, and intentions.

Talbert sets the stage for his reading of the Sermon by investigating Matthew's relation to Judaism and exploring the composition of the audience that received Jesus’ charge. He also takes into account the order of Jesus’ discourse, the distinction between character formation and decision making, and the question of whether or not the Jesus who speaks in the Sermon is a legalist.

In the commentary proper, Talbert attends to six large units of thought in Matthew 5-7. Section by section, he analyses form and content, comparing Jesus’ directives with similar statements in Jewish and Greco-Roman literature. The result is a superb commentary on the Sermon that will be of value to anyone studying this core passage of Scripture.
-Publisher.

The Sermon on the Mount is one of the most familiar passages in the New Testament. In this concise and clearly-written introduction to and commentary on the Sermon, Charles Talbert pays particular attention to its role in character formation and ethical decision making. After introductory chapters on reading the Sermon on the Mount, the book offers a section-by-section commentary. Talbert points out structural highlights, provides illuminating cross-references to Jewish and Greco-Roman literature, and concludes each section with a consideration of how it contributes to character formation and how it can be used with the rest of Scripture for ethical decision-making. The book is packed with insights that will be of great use to students as well as those who preach and teach the Sermon.
-Publisher

"Reading the Sermon on the Mount is vintage Talbert: lucid, logical, with mastery of the commentary tradition and intimate knowledge of primary sources. The author's emphasis on the Sermon's role in the formation of character is a most welcome gift to specialists and general readers alike."--C. Clifton Black, Otto A. Piper Professor of Biblical Theology, Princeton Theological Seminary"Charles H. Talbert's expertise regarding the relevant ancient sources, whether Greco-Roman or Jewish, is matched by his thorough familiarity with recent critical study of the Sermon on the Mount. He is also theologically sensitive and hermeneutically sophisticated. The result is a lucid and sure guide to the minefield that is the Sermon on the Mount."--Dale C. Allison Jr., Errett M. Grable Professor of New Testament Exegesis and Early Christianity, Pittsburgh Theological Seminary"Charles H. Talbert has made a wonderful contribution to the study of the New Testament and ethics. He writes with his characteristic decisiveness and clarity and brightly illumines the Sermon on the Mount from his deep grasp of the pertinent Greco-Roman and Jewish sources, the entire New Testament, and vintage scholarly literature."--Robert J. Karris, The Franciscan Institute, St. Bonaventure University
-Publisher

Charles H. Talbert (Ph.D., Vanderbilt University) is distinguished professor of religion at Baylor University. He is the author of many books, including Reading the Sermon on the Mount; Reading Romans, Reading Acts: A Literary and Theological Commentary on the Acts of the Apostles and the forthcoming volumes in the Paideia New Testament Commentary series on Ephesians-Colossians and Matthew.
His most recent works are Getting "Saved": The Whole Story of Salvation in the New Testament (with Jason A. Whitlark, Eerdmans, 2011); Romans (Smyth & Helwys Bible Commentary) and The Development of Christology During the First Hundred Years: And Other Essays on Early Christian Christology (Supplements to Novum Testamentum, Brill, 2011)
Koorong -Editorial Review.

A Guide to the Gospels and Acts (3rd Edition) (#01 in Exploring The New Testament Series)
David Wenham, Steve Walton
Paperback