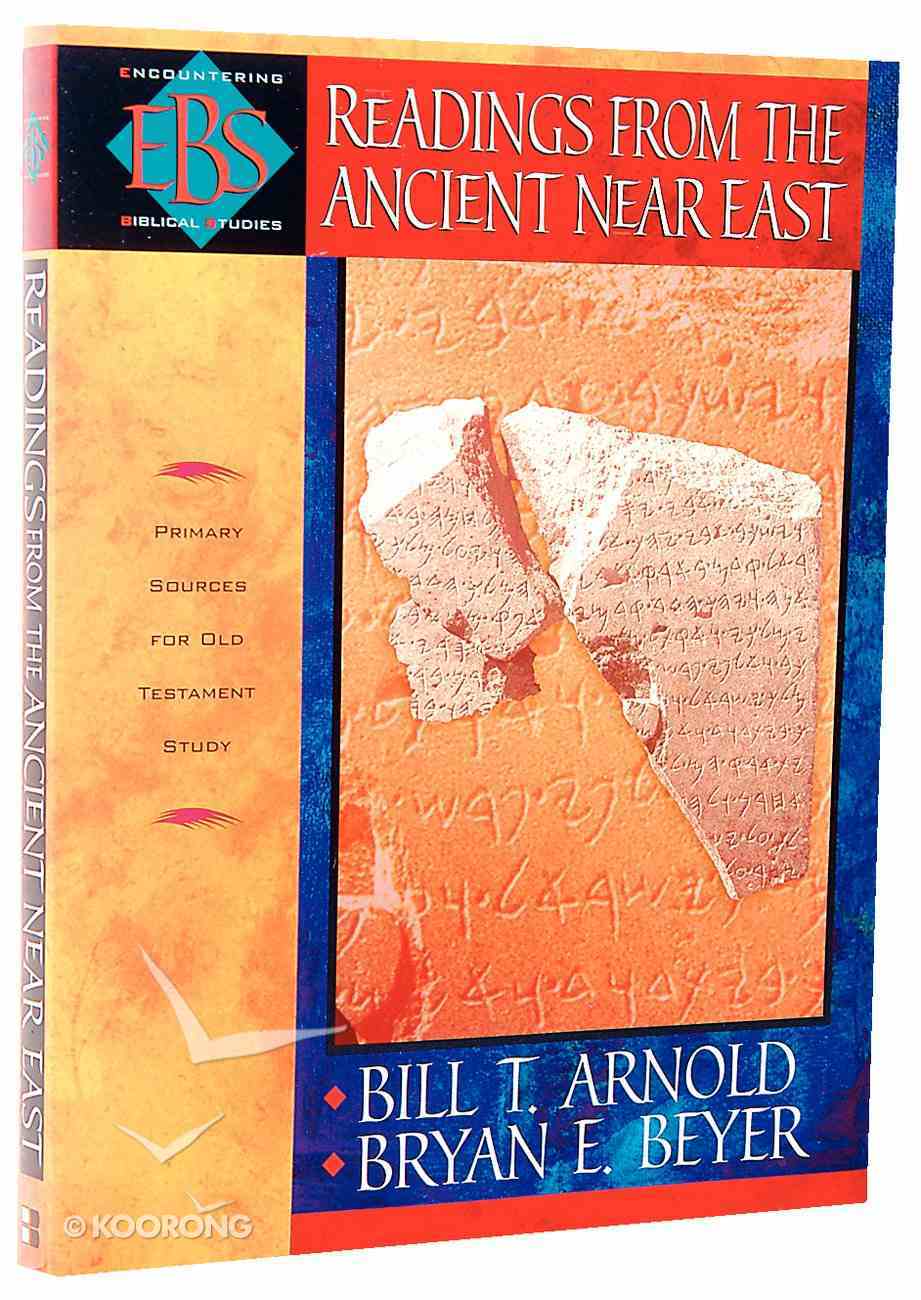 Readings From the Ancient Near East (Encountering Biblical Studies Series)

This volume takes the student through a wide variety of primary source texts from the ancient Near East that illuminate every book of the Old Testament. It is the companion volume to Encountering The Old Testament, co-authored by Bill Arnold...

1 available
Expected to ship within 4 hours from Australia.
Learn More
Free Shipping
for orders over $99.

The World Around the Old Testament: The People and Places of the Ancient Near East
Bill T Arnold (Ed), Brent A Strawn (Ed)
Paperback

This volume takes the student through a wide variety of primary source texts from the ancient Near East that illuminate every book of the Old Testament. It is the companion volume to Encountering The Old Testament, co-authored by Bill Arnold and Bryan Beyer. 240 pages, from Baker.

Essential to a proper understanding of the Old Testament is a knowledge of the political, historical, and theological environment of the ancient Near East. While there is an abundance of material explaining this environment, primary source texts are often unavailable or inaccessible to the beginning Old Testament student. This volume in the Encountering Biblical Studies series fills that void. Readings from the Ancient Near East takes the student through a wide variety of primary source texts from the ancient Near East that illuminate every book of the Old Testament. It is the companion volume to Encountering the Old Testament, coauthored by Bill Arnold and Bryan Beyer. The editors have compiled this volume with the beginning Old Testament student in mind. The selections are intended to move a learner with little or no knowledge of the ancient Near East to a basic understanding of its significant texts and authors. Texts spanning more than two thousand years include Sumerian creation
-Publisher

"There are a number of new volumes of translated ancient texts that might be of interest to students of the Bible, but most are either far too long or too narrowly focused to be used as companions to an undergraduate Bible course. This new volume promises a convenient, affordable reference for some of the most important writings that help us understand the world of the Old Testament."--Daniel Fleming, New York University"The editors' familiarity with the primary sources has resulted in a careful selection of material judiciously arranged to be of maximum benefit to the student seeking acquaintance with the vast literature of the ancient Near East relating to the Old Testament."-John Walton, Wheaton College"Readings from the Ancient Near East is a well-selected and well-introduced anthology. It is a natural and obvious choice as a textbook for introductory courses and is without doubt the most comprehensive, up-to-date, and affordable volume of its kind on the market."-Brent A. Strawn, Candler School of Theology, Emory University"Our understanding of the Hebrew Bible is enhanced when we are familiar with similar texts from the ancient world. Until now it has been difficult to introduce students to these ancient texts because only two types of translations existed: too large (and expensive!) or too small (and superficial!). The publication of Readings from the Ancient Near East solves this problem by providing complete translations of many important Near Eastern texts relating to the Hebrew Bible. With this volume, Arnold and Beyer bring us a step closer to becoming competent readers of Scripture."-Kent Sparks, Eastern University"This wonderful treasury of key ancient Near Eastern writings provides the essential background for interpreting the Bible in its original context. As an affordable and well-chosen selection of so many important literary works, it fills a need for a modern version of older anthologies that can be used in college survey courses on the Old Testament and its world."-Richard S. Hess, Denver Seminary"It is paramount that students of the Bible learn the rich textual heritage of the ancient Near East, and this great resource helps them do just that. But this volume is not only for university students. The work can easily be used by the layperson or pastor at the neighborhood church as a fascinating resource on the greater literary world of the Old Testament. This is probably the best small single-volume work of its type to appear in over thirty years."-Mark W. Chavalas, University of Wisconsin-Lacrosse
-Publisher