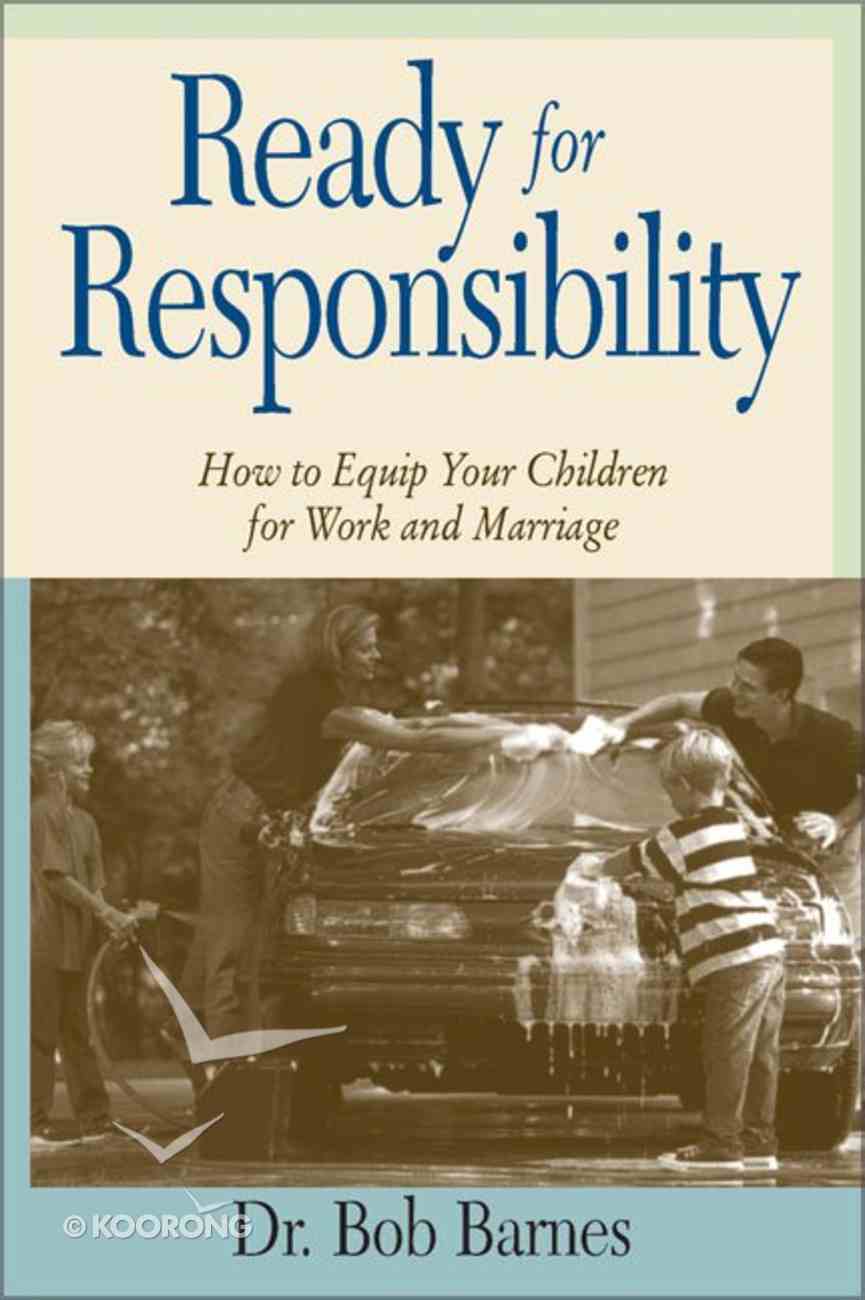 This book shows parents how to teach their children relational and personal management skills they will need to be good marriage partners, including personal responsibility, decision making, communication, and money management.

Winning the Heart of Your Stepchild
Robert Barnes
eBook

Give Your Child the World: Raising Globally Minded Kids One Book At a Time
Jamie C Martin
Paperback

Boundaries With Kids: When to Say Yes, When to Say No to Help Your Children Gain Control of Their Lives (Workbook)
Henry Cloud, John Townsend
Paperback

This book shows parents how to teach their children relational and personal management skills they will need to be good marriage partners, including personal responsibility, decision making, communication, and money management.
-Publisher

Dr. Robert and Rosemary Barnes are conference speakers and coauthors of Rock-Solid Marriage, Preparing your child for Dating, Ready for Responsibility, Great Sexpectations and We Need to Talk. Dr. Robert Barnes is executive director of Sheridan House Family Ministries, the author of several books, host of the weekly "Family Time Radio" program, and writer of a newspaper column on family issues. Rosemary Barnes is a frequent national conference speaker with Robert on marriage and family issues.

Chapter One The Learner's Permit Give her a credit card? You've got to be kidding! Why in the world are you doing that? She's only sixteen years old! She's still a kid!' I was sitting at lunch telling a friend about our beginning of the year plans for my daughter, Torrey. Torrey was entering her junior year of high school and we were spending the summer making decisions about what we, as her parents, needed to be teaching her this year. We knew the school would be helping to prepare her for many of her academic challenges. The guidance department had been talking to her about college and preparing to take the SAT exams. School was also helping her in the area of poise and confidence via the drama department. They were even putting her in some debate situations, making her stand up for what she believes in. They had her write and present a paper on her views of abortion. The school was working diligently at helping to prepare my daughter academically, but in what ways were her parents preparing her? If the school had thought it important to take some of the college entrance exams in tenth grade, just for practice, shouldn't I be setting her up to practice some of the more important things? But that brings up the real question my friend should have been asking at lunch that day. If the school was trying to prepare my daughter academically for her next step, shouldn't her parents also have a plan in place to help prepare her for the adult world she would be facing? Many evenings during the summer were spent getting ready for the new 'practice opportunities' we were going to implement this year. It didn't seem to make sense to keep my daughter from practicing adult responsibilities before she left home. No one can be expected to graduate and simply walk into an adult world prepared. It takes practice. The marines set aside time to prepare their soldiers. It's called 'basic training' or 'boot camp.' The men and women in basic training don't practice the things they will have to learn to succeed in boot camp. Instead, they work on the skills they will need when they are out in the real world of the marine. They practice war games and battle simulations. That way they're prepared to do the things that are expected of them as marines. Children need to practice the things they will need to be able to do as adults. I responded to my shocked friend at lunch. 'She's going to have to learn about areas of adult life such as credit cards sometime. Shouldn't we teach her while she's still at home?' Regardless of my explanation, this friend looked totally bewildered. He absolutely couldn't believe that I was putting a credit card in a sixteen-year-old's hands. He had never thought of the teenage years as a time for adult preparation. Then I asked him a question. 'When did you first get a credit card or a checking account?' 'Oh, I remember that day well,' my friend responded, looking off into space. 'It was the last thing my dad did as he dropped me off at college. We checked into a dorm, walked around the campus, and then went downtown to a bank. He made the arrangements to open an account for me. He got me a credit card and a checking account, and then we went back to the campus. He and mom kissed me good-bye, and we all cried as they drove off. Then we cried again once a month as we discussed the way I handled my finances!' my friend finished with a laugh. 'What do you mean?' I asked. 'My dad and I argued every month about my credit card bills and my checking overdrafts....' He stopped. Suddenly my friend stared off into space. I was having a hard time keeping a grin off my face. He looked at me and said, 'I wasn't even ready to handle finances when I was in college, let alone a junior in high school.' 'You weren't ready because you had no training and no one to supervise you as you attempted this adult activity. Your parents just gave you the tools and said good-bye.' This was just the kind of thing I wanted Torrey to avoid. Just as the school sees it as part of their job to set up a practice opportunity with the SAT exams, it's a parent's job to set up practice opportunities with as many of the expected adult competencies as possible. GIVE THEM A LEARNER'S PERMIT It doesn't make sense to all of a sudden hand an eighteen-year-old a credit card or a checkbook and then drive away, leaving them without the privilege of daily supervision. What does make sense is to give them a 'learner's permit' first. Before you can drive a car alone, you must spend a period of time driving while being supervised. Ideally that's at least one year. It's a practice time. It's more than that, however. It's a practice time where someone is watching and giving on-the-spot input. If that's good to do before getting a driver's license, logically, it would be good to do for many other adult competencies. What's illogical is to turn our children loose in a dormitory full of other under-prepared eighteen-year-olds and then expect them to somehow learn many of the needed adult skills. I want to be sitting next to my child as she is learning to drive. That way I can advise her, help her make decisions, or even grab the wheel if need be. Slowly we can work our way out of a parking lot and up onto the highway. It's a gradual process needing much supervision.