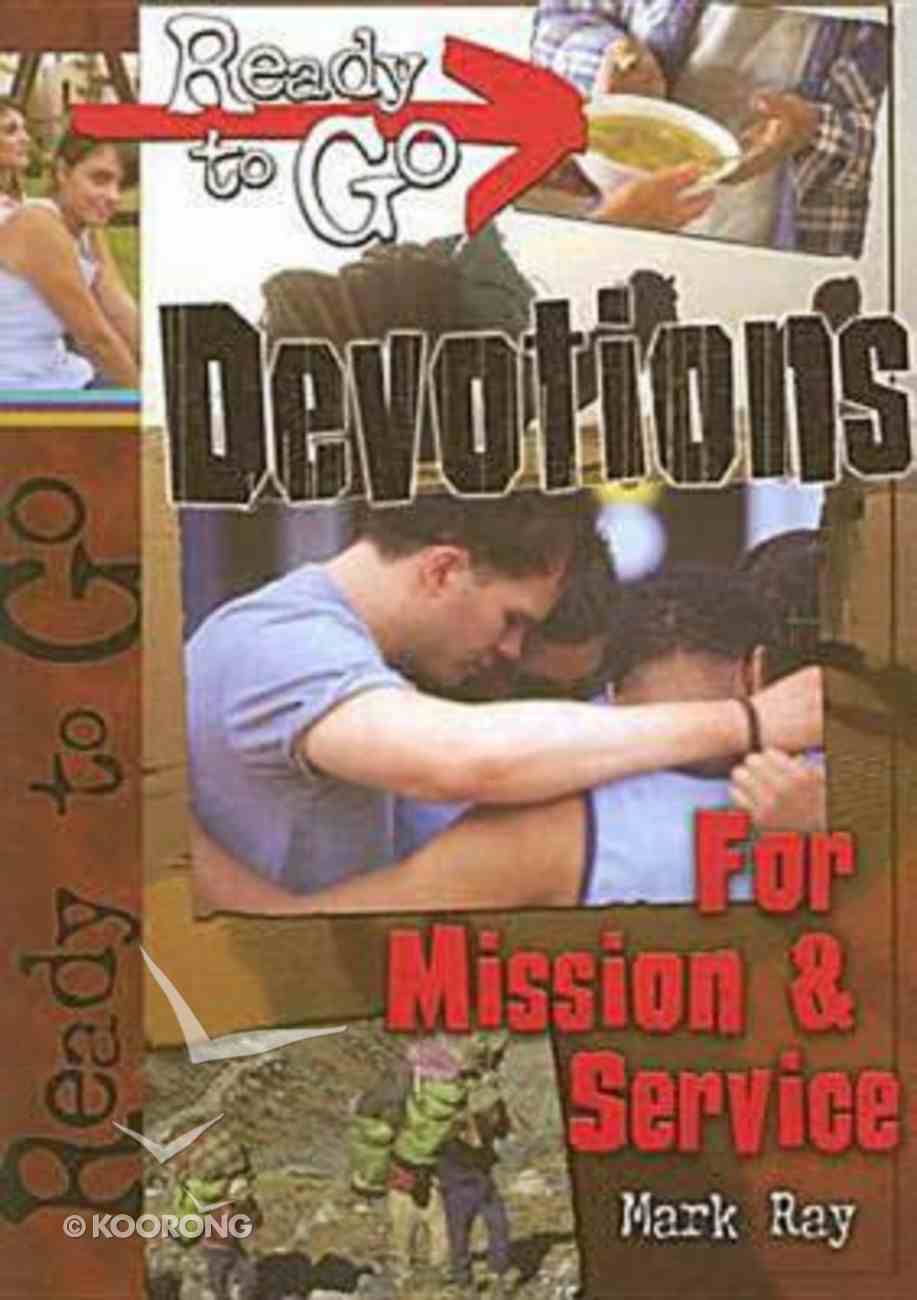 Ready-to-Go Devotions for Mission and Service is a toolkit of daily devotionals for youth mission trips. The devotions in this book address every aspect of the mission experience, from leaving home and sleeping on the floor to dealing with language...

Ready-to-Go Devotions for Mission and Service is a toolkit of daily devotionals for youth mission trips. The devotions in this book address every aspect of the mission experience, from leaving home and sleeping on the floor to dealing with language barriers and grumpy teammates. Each devotion includes a relevant Bible story, a commentary that connects that story to the mission experience, and a section that challenges the reader to take specific actions on the trip, back home, or both. The book includes devotions in preparation for, during, and after the mission trip or service project. The ready-to-go format allows the youth worker to quickly assemble a customized devotional journal for participants, matching each day s selection to what s likely to happen that day. The devotions could also be used in a group setting, which would allow the youth worker to pick devotions based on what has happened during the trip or event. Either way, the devotions point to the larger biblical and personal significance of mission trip or service project happenings .
What if you held a mission trip and nobody changed? It s a haunting, daunting question, one that youth workers and researchers across America are beginning to ask. Short-term mission trips (STM) have exploded in popularity since the mid-1990s, thanks in part to the Internet, which makes connecting with mission agencies and mission recipients easier than ever. Sociologist Kurt Ver Beek estimates that the number of North American short-term missionaries grew from 125,000 in 1989 to as many as four million in 2003. Many of those short-termers are teenagers. According to Christianity Today, more than two million American teens enter the mission field every year. Pollster George Barna reports that 15 percent of U.S. Christian teens have done a short-term mission trip, while the National Study of Youth and Religion found that 29 percent of all teens had participated in a short-term mission trip or religious service project. Unfortunately, the impact of short-term mission trips may be short-term as well, both for those who go on mission trips and for those who receive mission teams. Ver Beek recently surveyed North Americans who worked in Honduras after a 1998 hurricane, as well as those who were served by them. He found that the North American work teams had little or no lasting impact on the communities they served and that missionaries reported only a small, positive, lasting change in their own lives.

The situation isn t hopeless, however, according to Robert Priest, associate professor of
mission and intercultural studies at Trinity Evangelical Divinity School. In research with Ph.D. students at Trinity, he wrote in Christianity Today, I ve been impressed that while STM may not always or automatically produce desired results, the right sorts of STM, carried out in the right sorts of ways, and accompanied by the right sorts of reflections, have potential for good. Unfortunately, youth workers don t always build the right sorts of reflections into their mission trips. At best, they allot time in the daily schedule for reflection or debriefing. At worst, they just hope and pray that their students will somehow be transformed by the mission experience. The existing literature isn t much help. Books on mission-trip planning offer plenty of advice on selecting a mission agency, raising money, coordinating transportation, handling emergencies, entering closed countries, and re-entering the normal world, but they offer precious little advice on using the mission experience to impact the participants lives. The handful of available mission-focused devotional guides offer some assistance, but they typically take a one-size-fits-all approach. Usually presented as mission journals, these guides assume trips will be a certain length or include certain elements, such as dealing with non-English speakers. Ready-to-Go Devotions for Mission and Service fills the void, offering targeted, topical devotionals that can help turn short-term missions into life-changing experiences.

Mark Ray is married to Kyla Ray and has two sons, Matthew and Nathan. He has undergraduate and graduate degrees in Bible and Counseling from Freed-Hardeman University. A native of Odessa, Texas, he has worked as a preacher in Tennessee, Mississippi and Kentucky. He greatly enjoys his work in helping others grow closer to God spiritually and in helping people improve their relationships with one another.