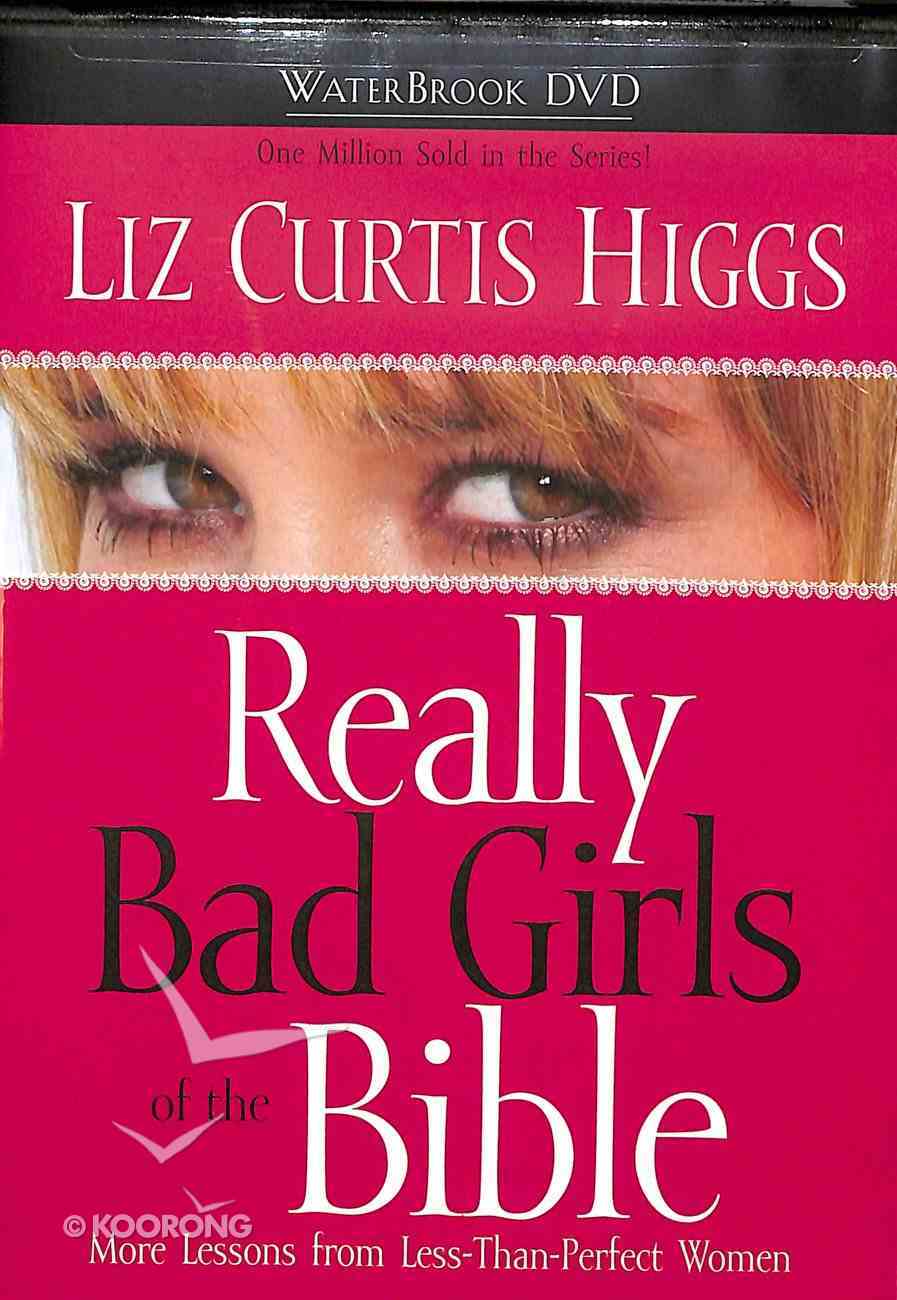 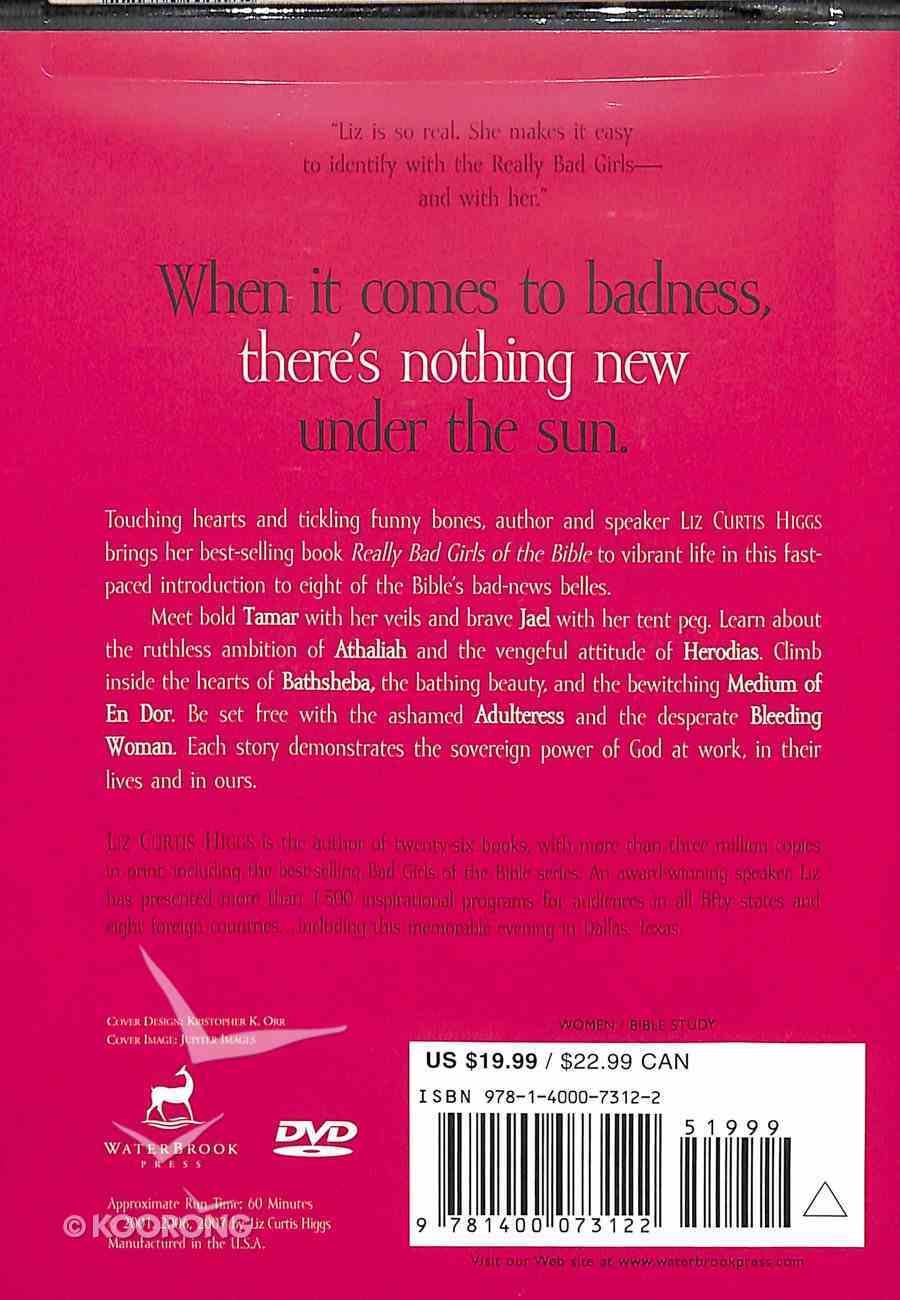 Really Bad Girls of the Bible

When it comes to badness, there's nothing new under the sun! Join author and speaker Liz Curtis Higgs as she brings her best-selling book Really Bad Girls of the Bible to life in this fast-paced presentation introducing eight truly bad...

31 Verses to Write on Your Heart
Liz Curtis Higgs
Paperback

When it comes to badness, there's nothing new under the sun! Join author and speaker Liz Curtis Higgs as she brings her best-selling book Really Bad Girls of the Bible to life in this fast-paced presentation introducing eight truly bad belles. You'll learn about the ruthless ambition of Athaliah, the vengeful attitude of Herodias, bold Tamar with her veils and brave Jael with her tent peg. Hear the tales of Bathsheba the bathing beauty and the bewitching medium of En Dor, the ashamed adulteress and the desperate bleeding woman. Each story demonstrates the sovereign power of God at work, even in women who were "really bad." Approx. 60 minutes.

"Who but Liz Curtis Higgs could so creatively reveal God's compassion, unconditional love, and mercy through such 'Bad Girls' in Scripture?"   --Carol Kent, speaker and author of Becoming a Woman of Excellence "This work is God-breathed, the best ever to come from Liz Curtis Higgs. Absolutely life-changing! You'll alternately weep, sigh, gasp, rejoice--and yes, even giggle.  And oh, is it filled with depth and grace."     --Diane Noble, best-selling author From the Trade Paperback edition.
-Publisher

Nobody ever said the women of Scripture were a bunch of saintly do-gooders! In this lively sequel to Cad Girls of the Bible, you'll meet eight more flawed and struggling women, including Jael, Tamar, Bathsheba, and the adultress. Learn what they have to teach contemporary believers---and how God's grace can redeem anybody's mistakes!
-Publisher

When it Comes to Badness, There's Nothing New Under the Sun

In her best-selling book Bad Girls of the Bible, Liz Curtis Higgs breathed new life into ancient stories depicting eight of the most infamous women in scriptural history, from Jezebel to Delilah. Biblically sound and cutting-edge fresh, Bad Girls already has helped thousands of women experience God's grace anew by learning more about our nefarious sisters.

And there are more where they came from! With Really Bad Girls of the Bible, Liz reveals the power of God's sovereignty in the lives of other shady ladies we know by reputation but have rarely studied in depth: Bathsheba, the bathing beauty. Jael, the tent-peg-toting warrior princess. Herodias, the horrible beheader. Tamar, the widow and not-so-timid temptress. Athaliah, the deadly daughter of Jezebel. And three ancient women whose names we do not know but who have much to teach us: the ashamed Adulteress, the bewitching Medium of En Dor, and the desperate Bleeding Woman.

The eye-opening stories of these eight "Really Bad" women demonstrate one really life-changing concept: the sovereign power of God to rule our hearts and our lives with grace, compassion, and hope.

Everyone is a moon, and has a dark side which he never shows to anybody. Mark Twain


Beth awoke with the twittering birds in the predawn darkness. It took her a few seconds to figure out where she was. Sitting in her car&mdash;that much was certain. Parked sideways in the gravel lot behind her apartment building. She&rsquo;d driven there apparently. But when? And how? From where?

The driver&rsquo;s door was hanging wide open. One blue-jeaned leg was draped out the car door, toes pointed north. Her blouse was half-undone and covered with a horrid-smelling, sticky substance. Remnants of red lipstick were smeared all over her face.

Or was that shame?

Nah. She didn&rsquo;t have any shame left.

She ran a hand through her hair out of habit, then swore at her disheveled image in the rearview mirror. Disgusting, Beth.

What day was it anyway? Her throbbing head fell back against the headrest. Saturday. The day after Friday, the day after she&rsquo;d acted like a complete idiot in front of the sales team at work. Lost it, big time. Absolutely blasted their ears off. If word got back to her boss, she could kiss this gig good-bye.

Beth groaned and squinted at her watch. Five something. The early morning chill seeped through her jeans, making her shiver. Her bladder was screaming for attention, but she ignored it, trying to get her bearings, sort things out, fill in the blank spaces.

Twelve hours ago she&rsquo;d come stomping into her living room after work, spitting mad, embarrassed over her anger and angry over her embarrassment. Without even shrugging off her jacket, she&rsquo;d rolled a thimbleful of grass into a tight little joint and dragged hard on it as if it were a cigarette, nearly choking.

Suddenly the blare of a car horn cut through the silent morning darkness and interrupted her thoughts, making her jump with a hungover shudder. Beth sank back in her seat, feeling her heartbeat slowly return to normal. Easy does it, kid.

After she&rsquo;d gotten high last night, then what?

In disjointed pieces more memories shifted into place. She&rsquo;d fallen asleep on the couch, only to wake up bleary-eyed and stupid around eight. After a hot shower and a cold beer, she&rsquo;d headed for the club and run into Tee.

Tee. Even now, still semiwasted in her car, she mustered a smile at the memory of Tee looking fine in his painted-on jeans. Not the man she&rsquo;d been looking for, but she&rsquo;d decided on the spot that he&rsquo;d do nicely. They&rsquo;d downed a couple of pitchers of Miller, danced a little, gotten high in the parking lot.

And then&hellip;nothing. Did they go to his place? To another bar? Why couldn&rsquo;t she remember? Where did those hours go?

Beth banged the palm of her hand on the steering wheel in frustration, avoiding a second glance in the rearview mirror. Whatever had happened last night, she&rsquo;d made a spectacle of herself&mdash;that was pretty obvious.

C&rsquo;mon, Beth. Time to go inside. Grabbing her purse, she swung her other leg out of the car and stumbled toward her apartment, fumbling for the keys. Her hands were shaking so badly it was all she could do to get inside before her heaving stomach sent her in search of a trash can, pronto.


Sprawled on the kitchen floor minutes later, every inch of her body in pain, Beth fought against the sobs that pressed against her chest. She&rsquo;d had bad nights before, but not this bad. Not whole hours lost in the blackness, not driving a car blind drunk, risking her own life and others. How could Tee have let her drive home? Had they argued?

Beth forced herself to stand up, clutching the edge of the faded Formica counter to keep from falling to her knees. Enough.Twenty-seven years was enough, wasn&rsquo;t it? If a chick couldn&rsquo;t get her act together after all that time, she oughta hang it up, right?

She made her way down the hall, toward a shower and a bed, hoping to wash away her pain and sleep away the shadowy, shameful memories, yet knowing it wouldn&rsquo;t help.

What did she have to live for anyway? No real friends, probably no job come Monday morning, no decent man in her life, no future whatsoever.

Nothing but to get out of bed, get to work, get home, get drunk, get lucky.

Depositing her clothes in an untidy heap on the linoleum floor, Beth fell into the shower. Scalding hot water slapped her across the face. Numb with pain, she simply stood there and took it.

Pills would be the easiest way. No pain, no hassle, just sleep.

She turned her back on the water as a flood of unwelcome tears streamed down her cheeks. The pulsating water lashed against her shoulders like a leather strap, a much-deserved punishment.

What&rsquo;s So Bad About Being a Bad Girl?

Beth has a problem, but it&rsquo;s not the one you might think of first.

Her problem isn&rsquo;t drinking, drugs, or promiscuity. That&rsquo;s the outside stuff, the part most folks agree makes her a Bad Girl.

But here&rsquo;s the deal: You can straighten up your external act and still be dying inside. People applaud &rsquo;cause you&rsquo;re &ldquo;clean,&rdquo; but inside you feel dirtier than ever.

Beth&rsquo;s problem also isn&rsquo;t low self-esteem, unresolved anger, or feelings of abandonment. Those things may fuel her Badder-Than-She-Wants-to-Be lifestyle, but they aren&rsquo;t at the heart of it. When you get such psychological issues worked out, people mistakenly think you&rsquo;re &ldquo;cured,&rdquo; an emotionally healthy woman ready to face the world.

Our girl Beth knows better. She&rsquo;s knows that identifying&mdash;even discussing at length&mdash;those prickly core issues doesn&rsquo;t make them go away, no matter how many books you read or sermons you hear.

Her problem is simply this: Beth is in a pit, and she can&rsquo;t climb out.

Listen to me: This will not help Beth. She is already covered with shame and self-loathing; she doesn&rsquo;t need more added on top. Judgment isn&rsquo;t a lifeline; it&rsquo;s a death sentence.

Good people&mdash;parents, spouses, friends, well-meaning folks, Christians&mdash; may venture near the edge of Beth&rsquo;s pit, not to judge, but to encourage. They call down to her, &ldquo;Just climb out, Beth. You can do it! We&rsquo;re all waiting up here for you, sweetie. Come on, take that first step.&rdquo;

Oh, dear. This won&rsquo;t help Beth either. It&rsquo;s too dark down there even to see a toehold or feel a rope bouncing off your shoulder or hear a ladder being lowered rung by rung. It&rsquo;s especially tough when you&rsquo;ve been crying for a good while.

Besides, Beth already knows she can&rsquo;t do it. She&rsquo;s tried again and again to climb out of her pit of despair, each time slipping deeper into the muck. It may be pitch-black in that hole, but she&rsquo;s been down there so long the darkness feels like home.

Some kind believers may gather in a circle around the top of her pit. They pray that Beth will wake up and climb out&mdash;&ldquo;Dear Lord, let Beth see her sins clearly. Tell her we love her&rdquo;&mdash;before heading to Denny&rsquo;s for brunch, convinced they&rsquo;ve done all they could for poor, misguided Beth.

Is this woman beyond reach, beyond hope?