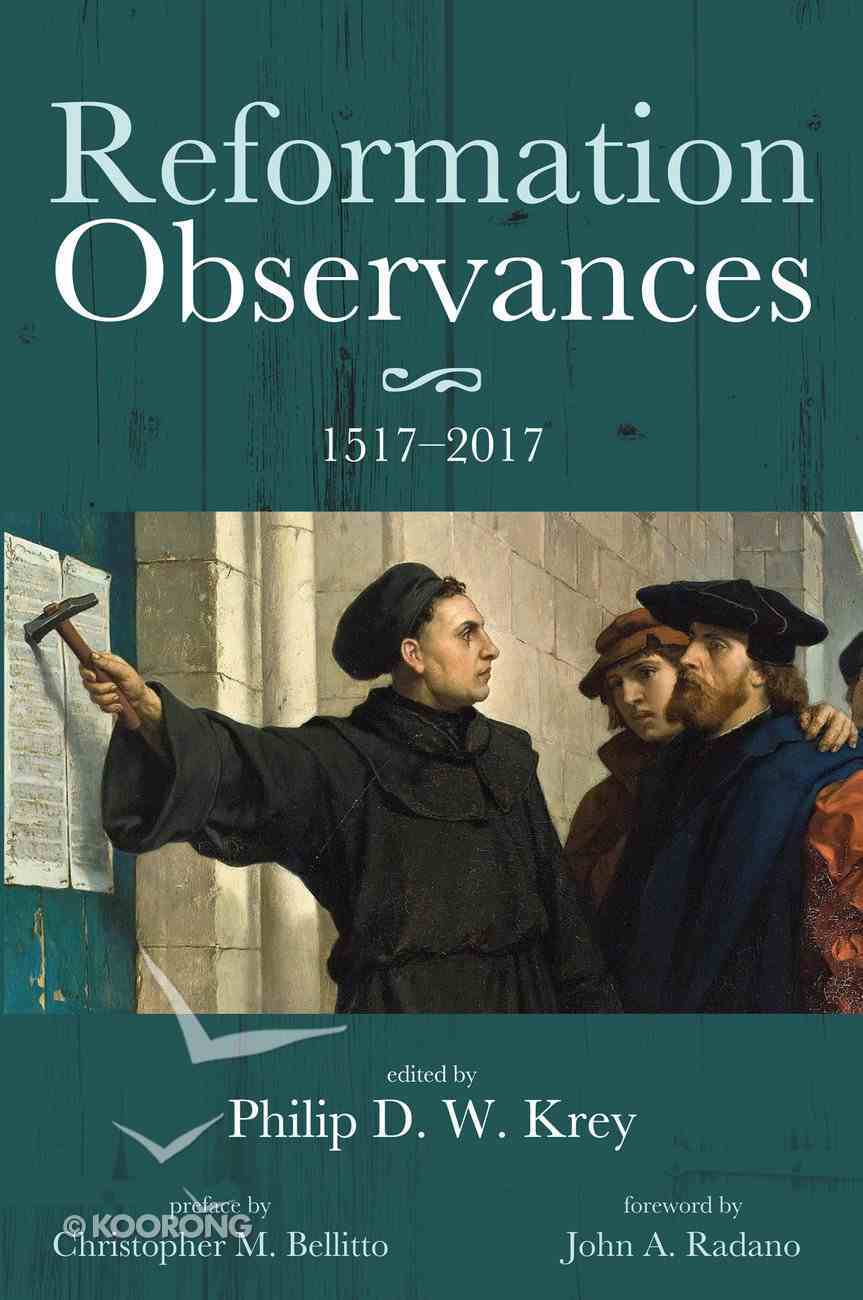 The year 2017 marks the five-hundredth anniversary of the Reformation, if that event is dated from the posting of Martin Luther's Ninety-Five Theses. Admittedly, 2017 is an arbitrary and somewhat artificial milestone. Nevertheless, anniversaries can be special occasions that allow...

The year 2017 marks the five-hundredth anniversary of the Reformation, if that event is dated from the posting of Martin Luther's Ninety-Five Theses. Admittedly, 2017 is an arbitrary and somewhat artificial milestone. Nevertheless, anniversaries can be special occasions that allow for an appreciation and evaluation of memorable persons and events. As a number of Reformation anniversaries approach, the historical significance of the Reformation merits increased attention. Employing a variety of historiographical methods from intellectual history to postcolonial theory, this volume demonstrates how four major traditions observed the Reformation: Lutheran, Anglican, Reformed, and Roman Catholic. The foreword and preface place the essays into the contemporary and broader historical contexts in the history of reform. Commemorations of the Reformation varied in different periods, often influenced by immediate historical contexts. How are those sixteenth-century events, which caused both renewal and conflict in church and society as well as divisions between those expressions, to be viewed in the twenty-first century in a setting broader than Europe? ""All Christians must salute the editor and contributors to this volume, which could not have been written on the500thanniversary of the traditional birth of the Reformation. Only a century of serious ecumenical discussion (and coordinated action for the good) has made the production of this book possible.Here we have four substantial essays, each historically and theologically well-informed, that address, in order, the evolving image of Luther, the developing relationship of the Anglican to the Lutheran communions, the fascinating influence of the Reformed tradition on Christian India, and maturing Roman Catholic views of central Lutheran doctrines revolving around justification. An exemplary conversation in print, this is an intellectual feast.Into it, not only historians and the ordained but all the baptized are invited, and from it all will be richly nourished."" --Kevin Madigan, Harvard Divinity School ""Reformation Observances goes beyond simple commemoration of Martin Luther's Ninety-Five Theses. Its contributors examine past centennials in historical context, while looking at ecumenical dialogue concerning the theological issues dividing Christian denominations. Most intriguing, one contributor reaches beyond the West to Christianity in India. In relatively few pages, Reformation Observances challenges us to see the dawn of the Reformation in an ecumenical, multicultural light."" --Thomas Izbicki, Rutgers University ""Much attention is being given to 2017 as the 500th anniversary of the Reformation and especially to the present ecumenical setting. Yet 2017 can only be appreciated and understood by giving attention to how the Reformation has been observed in the past. How did the Lutheran, Anglican, Reformed, and Roman Catholic traditions in the course of 500 years note or not note the Reformation? The answer to this question can only enrich consideration of the Reformation in this century. This volume of collected essays seeks to supply an answer. Anyone interested in the significance of this anniversary of the Reformation will gain insights by means of this collection of reflections."" --William G. Rusch, The Divinity School, Yale University Philip D. W. Krey, Ministerium of New York Professor Emeritus at the Lutheran Theological Seminary in Philadelphia and president there from 1999 to 2014, is Senior Pastor at St. Andrews Lutheran Church in Perkasie, Pennsylvania. He has coedited Romans 9-16 (2016) and The Catholic Luther (2016), both with his brother, Peter D. S. Krey.
-Publisher