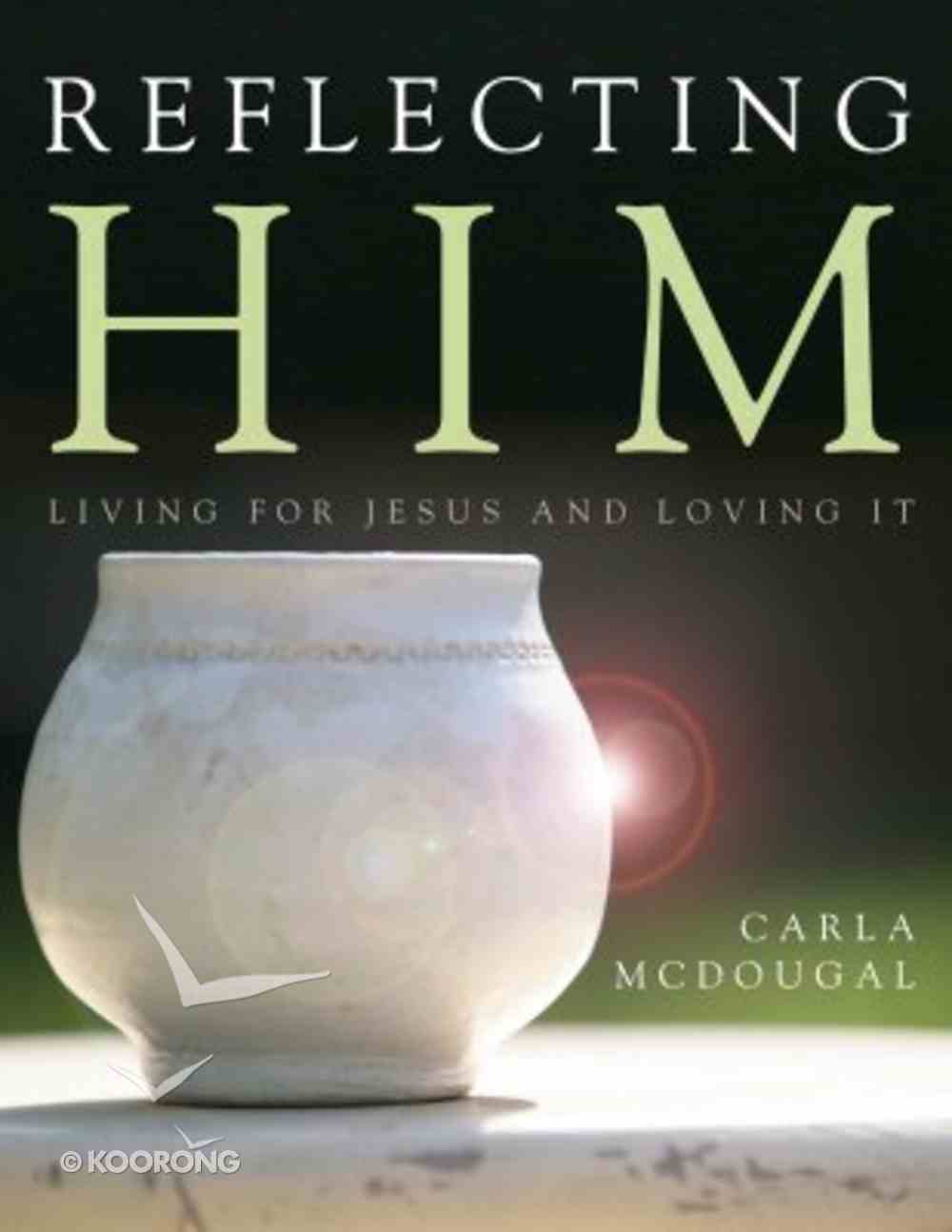 Reflecting Him: Living for Jesus and Loving It Do you see Jesus in your daily life, or save Him for emergencies? God longs for you to spend your day with Him. The more you ask the Holy Spirit to...

Reflecting Him: Living for Jesus and Loving It

Do you see Jesus in your daily life, or save Him for emergencies? God longs for you to spend your day with Him. The more you ask the Holy Spirit to open your eyes, the more you recognize God�s hand on your life. As a result, you become His reflection.

In ten weeks, through Reflecting Him, you will:
� Realize life is not about me, but all about Him.
� See daily applications for lessons learned from scripture.
� Understand how God is directing your life � often without you knowing it.
� Learn the importance of prayer in your everyday activities.
� Discover the joyful intimacy of a life filled with Jesus.
� Realize how your personal relationship with Jesus changes when you make Him part of everything you do.

Carla McDougal�s study comes in small enough bites to digest, but deep enough content to stimulate change and growth. Like Jesus� parables which teach important lessons by creating visual pictures, Reflecting Him uses familiar objects and situations to draw comparisons between your physical and spiritual lives. Samples of questions asked throughout the weeks of study:
� How does the pottery process resemble your spiritual life?
� How can God use our five senses to teach us about Jesus?
� What spiritual truths can we gain from studying the sun-earth connection?
� What can God teach us about prayer as we walk through each room of the house?
� How can pumping gas into a car remind us of faith?
� Is working in your garden or flowerbed enjoyable? You will love this powerful analogy!
� How can road construction teach you to live daily for Jesus?
� Exercise is essential for our physical bodies. Why is spiritual exercise vital for a believer?

Each week is divided into five days (lessons), supporting the central theme for the week. Each daily lesson includes these elements:
� Introduction to the lesson topic and a Life Connection
� Scripture Excavation � Digging into Scripture
� Hidden Treasures � Connecting the week�s theme with the designated Scripture
� Celebrating Treasured Gifts � Applying Jesus� teachings to life, and taking time to praise God
� Reflection Pause � Connecting the dots between the Life Connection, the weekly topic, and God�s word.
Intermingled throughout the lessons are some funny but true stories, personal testimonies, and real-life facts.

Reflecting Him is written to meet you where you are in life. If you prefer to do the study by yourself, that works great! If you need the accountability of a group, this study encourages discussions about what you and others in your group learn from the Holy Spirit each week. But whether you are in a small group, a large one, or by yourself, be ready for an exciting adventure that holds laughter as well as tears!

If you are a new believer yearning to study God�s word, or someone well trained in the Word of God you will see how a true relationship with the Lord can change your life. Jesus tells us to abide in Him. This study helps you develop your walk with Jesus so you become excited about living for God and loving it!

Reflecting Him is more than just a Bible study.

The Reflecting Him Video Teaching Series is designed to accompany the ten-week Bible study. Each week�s lesson starts with Carla McDougal speaking about something pertaining to the lesson. She brings to life the way God is involved in everything we do. The session also includes an episode from Behind the Veil, an original movie which shows how lives are changed when God�s truths are revealed. Follow a daughter who learns to reconnect with God when she goes home after her father�s death. Watch her son learn about his roots, and at the same time discover what it means to be a child of God. Watching these characters begin to reflect Jesus in their lives leaves an imprint on the heart of the audience.

The Reflecting Him Leader�s Guide is a downloadable PDF available on www.reflectivelifeministries.org. It was created to help facilitator�s encourage and connect the women embracing this study. It includes summaries of the lessons for each week as well as helpful hints to the leaders and facilitators.

An Invitation invites the listener to soak, reflect and rest in the arms of Jesus. This inspirational, soft jazz CD, written and performed by Cindy Vinson, captivates the audience, creating sweet moments of worship and praise. It is designed to accompany the Reflecting Him Bible study. Get ready for some intimate and powerful moments with God.

Carla McDougal founded Reflective Life Ministries, headquartered in the Houston, Texas area, in 2005. Her true passion for her Lord and Savior, Jesus Christ, shines brightly, whether she is speaking or writing. It humbles her to realize His love, mercy, and grace go beyond her understanding. She truly believes laughter is medicine from the Lord that breaks down walls and removes the masks in our lives. As a result, God is sending Carla around the world to speak to women from all walks of life. </br> </br> Carla’s first book, Reflecting Him: Living for Jesus and Loving It, is a 10-week study that encourages you to open your eyes to God’s daily life lessons. She added three other products to enhance the study – a Video Teaching Series, a full length movie, and an original music CD.</br> </br> Carla is married to her childhood sweetheart, Fred. They have 3 sons and one daughter. </br>

:One morning as I entered the kitchen, I realized some changes had occurred during the night. Some of the leaves from the beautiful ivy plant on the kitchen table were missing. Upon further investigation, I found the tattered leaves strategically placed in a nest-like shape in the center of one of the chairs. I immediately thought, Why would one of my children wake up in the middle of the night to do this? Of course, not one of them confessed to the crime.
The next morning, to my surprise, I found the same thing. I imagined someone entering our home in the wee hours of the morning to set this weird scene. Puzzled, I decided to begin breakfast. As I flung open the pantry door, something ran across the top of my feet. An electrifying shock pierced my whole body, and my penetrating scream echoed through the house. My four children hurried to the scene. In a split second we realized the identity of our mysterious night visitor ? a rat!
Shaking profusely, I called my husband at work to share my horrible experience. Later that evening we strategized ways to catch this home invader. Fred purchased one of those large rat traps ? you know? the ones that look like they could capture a human! We decided cheese would ensnare the intruder, but he skillfully snatched the cheese without tripping the trap.
Night after night, we tried everything from apples to peanut butter with no luck. Finally, we resorted to plain, old rat poison, and one morning a long, thick, gray tail protruded out from under the utility room door. I heard the victory chant in my head, The rat is dead! The rat is dead! Joy and relief flooded my heart!
Almost a month later, while cleaning out the utility room closet, I came across the most unusual thing. In the darkest corner lay a mound of rubbish ? little toys, rotten food, army men, coins, and rat evidence. The pack rat had used this dark corner to store his collectables. Guess who got to clean up his mess?
What a life lesson! Sins we think are hidden, eventually come to the surface. The pack rat, in his busyness of stealing and stashing his goods, didn?t realize the death trap waiting for him. I hope you can recognize any areas in your life that need to be exposed to the light so you can experience God?s mercy and grace before you get caught in a trap!
You may be wondering why we are starting with the closet. It is obviously not the most important room in your house. It is usually the place we store junk so others can?t see it, and we can forget about it. Remember the old saying, ?Out of sight, out of mind?? Many times closets have dark corners, and their contents remain a secret unless a light shines on them. These particular closets are usually windowless, with no exposure to natural light.
It is vital for us to deal with these areas of our spiritual homes first. Jesus tells us to surrender it all to Him. This includes the dark things we stuff in the backs of our minds and hearts. Ask Him to reveal any hidden areas that need exposure to His Light. Experience the freedom of giving everything to the Lord as we rummage through The Closet.

Who Do You Say That I Am?: A Fresh Encounter For Deeper Faith
Becky Harling
Paperback