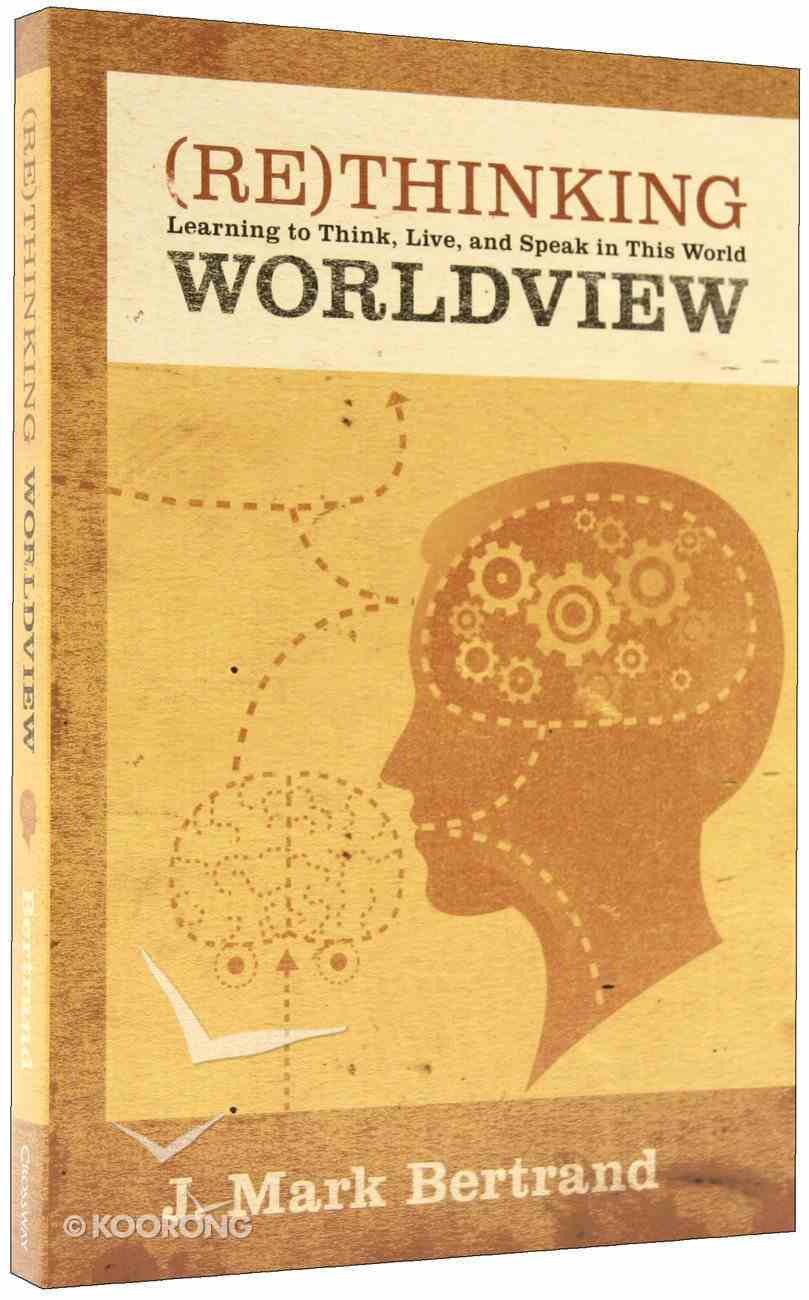 Rethinking Worldview: Learning to Think, Live, and Speak in This World

Everyone has a worldview. How did we get it? How is it formed? Is it possible by persuasion and logic to change one's worldview? ^^In Rethinking Worldview , writer and worldview teacher J. Mark Bertrand has...

Everyone has a worldview. How did we get it? How is it formed? Is it possible by persuasion and logic to change one's worldview? ^^In Rethinking Worldview, writer and worldview teacher J. Mark Bertrand has a threefold aim. First, he seeks to capture a more complex, nuanced appreciation of what worldviews really are. Then he situates worldviews in the larger context of a lived faith. Finally, he explores the organic connections between worldview and wisdom and how they are expressed in witness.

^^Bertrand's work reads like a conversation, peppered with anecdotes and thought-provoking questions that push readers to continue thinking and talking long after they have put the book down. Thoughtful readers interested in theology, philosophy, and culture will be motivated to rethink their own perspectives on the nature of reality, as well as to rethink the concept of worldviews itself.

^^"Rethinking Worldview throws off sparks able to light the dry tinder that many Sunday school classes and seminary seminars have become. Bertrand's four worldview pillars, his explanation of how to move from consumer to critic to contributor, his discussion of personal unity and diversity within the Trinity, and much besides, make this book worth having and giving."
^Marvin Olasky, Editor-in-Chief, World magazine

^^"The strength of Bertrand's book is its comprehensiveness, as the author turns the prism of worldview until every angle has been illuminated. Bertrand maintains our interest throughout with an incipient narrative thread in which his understanding of worldview is told as the sum of his own discoveries and experiences in relation to worldview. The book actually has the quality of a suspense story in which the reader is led to wonder what Bertrand discovered next in regard to worldview."
^Leland Ryken, Professor of English, Wheaton College

^^"An engagingly written work to strengthen believers in their efforts to engage the world in a winsome and effective manner. This excellent book provides an illuminating and thoughtful way forward for the twenty-first-century church to think, live, speak, and worship. Bertrand has made a splendid contribution to the ongoing conversation regarding Christian worldview thinking. After reading this book I wanted to shout, 'Yes and Amen!' I heartily commend this book and trust it will receive a wide readership."
^David S. Dockery, President, Union University
-Publisher

I Believe in ChristmasItrs"s the first Christmas I can remember. It arrived just seven weeks after the deaths of my father and baby sister. To make matters worse, it was in the heart of the Great Depression. Things were tough. All of us children who were older made what income contributions we could, but the truth was my mother had eight of her eleven remaining children still living at home, and six were too young to work. Understandably, the Ziglar kids were concerned about what kind of Christmas it would be!The good news is that though our grief was fresh, we still celebrated Christmas. We received no toys that year, but much to my delight in my gift box I found three English walnuts and something I had never tasted before-raisins! They were absolutely delicious. Mama prepared her wonderful molasses candy, and we had a small cedar tree. And my mother read the Christmas story, like she always did.My sixth Christmas will always have great meaning to me. We celebrated the birth of Christ even in hard times because we believed in Christmas. A Change in Celebrating the SeasonUnfortunately, over the years things have changed. The cheerful "Merry Christmas" of yesteryear has been replaced by the politically correct "Happy Holidays!" In the minds of many people, we celebrate "holidays." Not only is Christ not at the center of the celebration, he isnrs"t even considered to be a reason for the season!If I seem upset about the changes that I see taking place in regard to Christmas, it is because I am! Itrs"s not because an old tradition is being changed. No, Irs"m upset that the event that made it possible for me to have a life I could never have imagined is being hidden from view with decorations, wrapping paper, parties, and political correctness! Christmas! A Reason to CelebrateYou see, I believe itrs"s worth celebrating that Jesus came to earth-his birth signaled hope for all mankind. I believe that as he lived a perfect life before God and mankind, he showed that he truly was Godrs"s Son. And I believe that by giving his life up on a cross, he completely paid the penalty that my sins-and yours-deserve before a holy God. And it was made possible because of that first Christmas.How could I not believe in Christmas? Because Christ was born as a baby in a manger, thatrs"s more than enough reason to celebrate Christmas for what it is-a joyful occasion. Irs"ve experienced forgiveness of my sins, and have the assurance of eternity in heaven!If you donrs"t know Jesus Christ, let me say that he tells us in John 14:6, "I am the way, and the truth, and the life. No one comes to the Father except through me." How do you do that? First, understand that Irs"m talking about a relationship, not a religion. All the worldrs"s major religions emphasize that you qualify for heaven by your good works-the things that you do. Such "religion" is spelled "d-o." Christianity is spelled "d-o-n-e." Christ already paid for our sins when he died on the cross. "God shows his love for us in that while we were still sinners, Christ died for us" (Romans 5:8). And he rose from the grave proving that the punishment for our sins was fully paid.Nothing we could ever "do" could qualify us for Godrs"s forgiveness and reserve our place in heaven. Thatrs"s why Christ himself said, "This is the work of God, that you believe in him whom he has sent" (John 6:29). Celebrate Like Never Before!God forgives us, saves us from our sins, and gives us eternal life based on our belief in what Jesus did for us. Why? Because God is gracious beyond measure! The Bible says that it is "by grace you have been saved through faith. And this is not your own doing; it is the gift of God, not a result of works&rd
-Publisher

J. Mark Bertrand is the author of Rethinking Worldview: Learning to Think, Live, and Speak in This World and has an MFA in Creative Writing from the University of Houston. His debut solo suspense novel Back on Murder will be published in summer 2010 by Bethany House, and he has co-authored Beguiled with Deeanne Gist. He grew up in Louisiana, spent fifteen years in Houston, and now lives with his wife in Sioux Falls, South Dakota.For more information, visit www.jmarkbertrand.com
Koorong -Editorial Review.