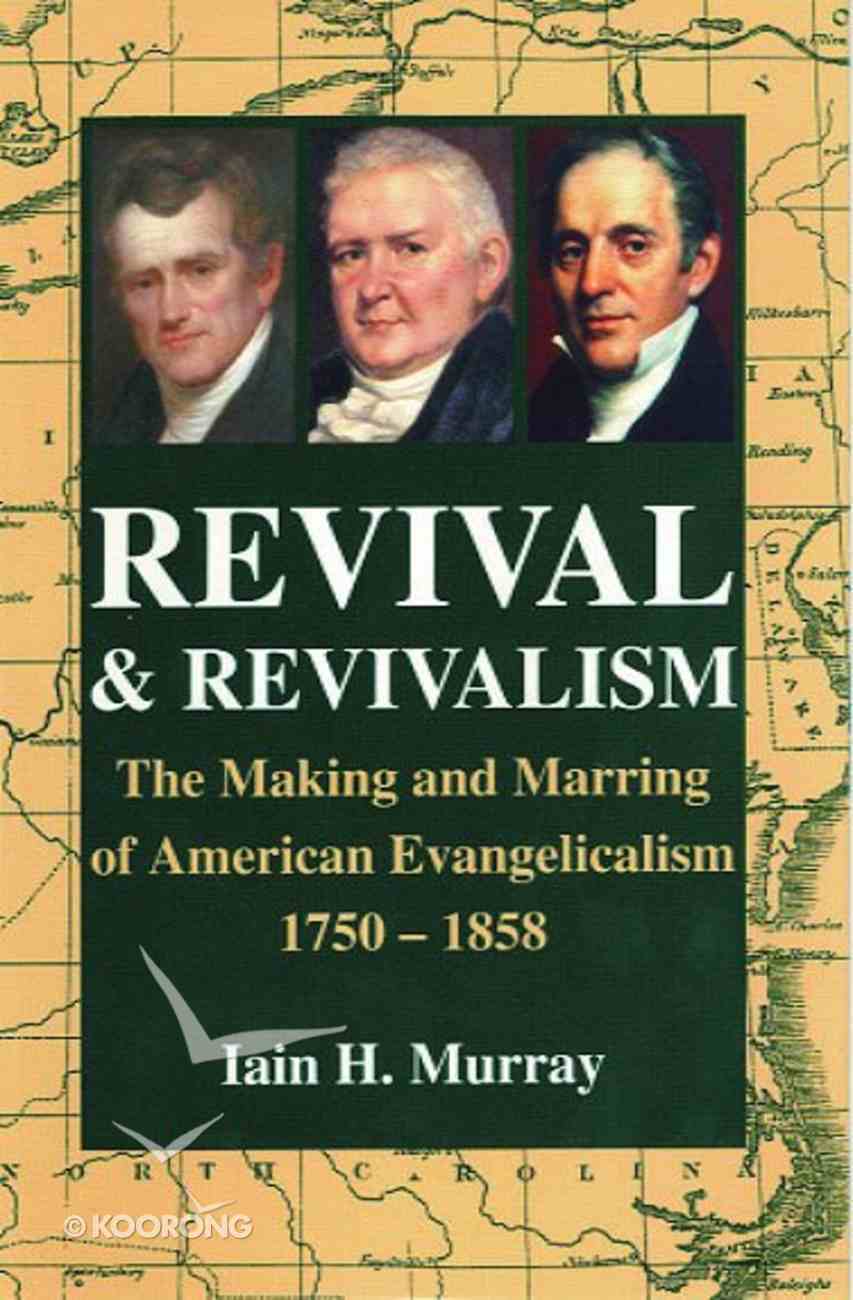 THE MAKING & MARRING OF AMERICAN EVANGELICALISM 1750-1858NEWIain MurrayThis is not merely a record of the churchs past. Rather, those who read it will soon realise that it provides a key to understanding contemporary evangelicalism and its deep needs. It...

THE MAKING & MARRING OF AMERICAN EVANGELICALISM 1750-1858NEWIain MurrayThis is not merely a record of the churchs past. Rather, those who read it will soon realise that it provides a key to understanding contemporary evangelicalism and its deep needs. It may not be too much to claim that this volume is essential reading for Christians who desire true revival in the churches of our own day. - Sinclair Ferguson, Westminster Theological Seminary. 455 pages, from Banner of Truth.

'Anyone interested in revivals of religion, whether that interest grows primarily out of the academy or the church, will find Revival and Revivalism a valuable new resource.' Professor Garth M. Rosen, Gordon-Conwell Theological Seminary.
-Publisher

Marrying careful historical research to popular and relevant presentation, Revival and Revivalism traces the spiritually epoch-making events of the eighteenth and nineteenth centuries through the eyes of those who lived at their centre. Fundamental to the book's thesis is a rejection of the frequent identification of 'revival' with 'revivalism'. The author demonstrates that a common understanding of the New Testament idea of revival was prevalent in most denominations throughout the period 1750-1858. Revivalism, on the other hand, is different both in its origin and in its tendencies. Its ethos is mancentred and its methods too close to the manipulative to require a supernatural explanation. Iain Murray argues that an inability to recognize this distinction has led many to ignore the new and different teaching on evangelism and revival which began to be popularized in the 1820s. While the case against that teaching was argued almost universally by the leaders of the Second Great Awakening their testimony was submerged beneath propaganda which promised a 'new era' if only the churches would abandon the older ways.
-Publisher

Murray, born in Lancashire, England, was educated in the Isle of Man and at the University of Durham and entered the Christian ministry in 1955. He served as assistant to Dr. Martyn Lloyd-Jones at Westminister Chapel (1956-59) and subsequently at Grove Chapel, London (1961-69) and St. Giles Presbyterian Church, Sydney (1984-84), Although remaining a minister of the Presbyterian Church of Australia, he is founding trustee for Banner of Truth Trust.

For the Love of God: How the Church is Better and Worse Than You Ever Imagined
Natasha Moore, John Dickson, Simon Smart, Justine Toh
eBook