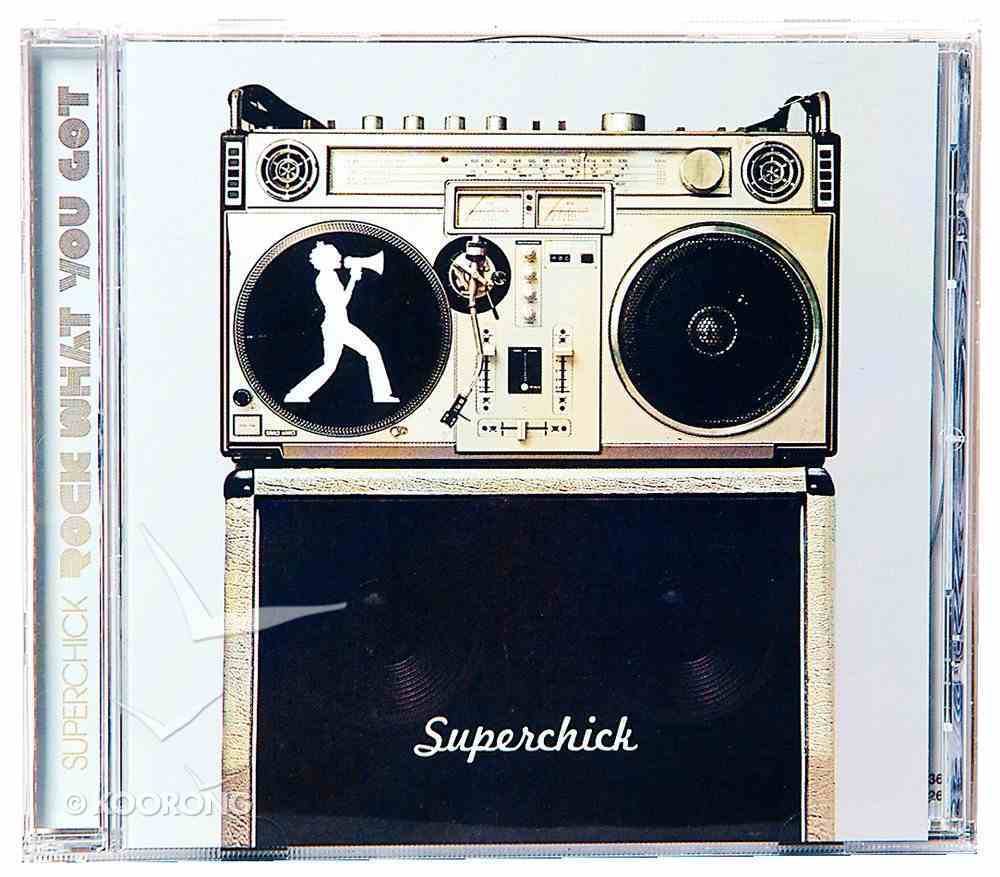 Rock What You Got

Inpop Records' sister-fronted band Superchick follows up 700,000 career albums and 70 film, television and videogame placements with its boldest, most unapologetic project to date, appropriately titled Rock What You Got - three years in the making and on the...

Giving Over
Consumed By Fire
CD

Things That Got You Here
Sidewalk Prophets
CD

No Matter What
Ryan Stevenson
CD

What If We Were Real
Mandisa
CD

Hope is What We Crave: Live (Cd/dvd)
For King And Country
CD

Inpop Records' sister-fronted band Superchick follows up 700,000 career albums and 70 film, television and videogame placements with its boldest, most unapologetic project to date, appropriately titled Rock What You Got - three years in the making and on the heels of Superchick's most successful album ever - Beauty From Pain 1.1. Seeking out world changers in the lost corners of a generation, Superchick noisily challenges the status quo, while journaling the band members' battles with depression and cancer in the quieter moments of the record.

Superchick is living up to its name. Its first four albums have combined for 700,000 copies sold, more than 70 film, television and videogame song placements, and five No. 1 singles. But for a band inspired to empower its listeners, its new album does more than walk the talk. . . it rocks the talk!

"We've always encouraged people to go nuts with their gifts and abilities, but on this album we personally did that ourselves," says Matt of the band's latest sonic stunner, Rock What You Got. "There was an instance where Dave did a 100 different guitar takes of one riff 'til his fingers bled, and Tricia kept singing until her voice gave out. On this album we just went for it!"

Rock What You Got infuses a "rock-o-tronic" sound - an electropunk mash-up of slashing guitars, pulsing keyboards and grit-pop vocals - with enough innovative production to make Tony Stark jealous. In music and message, it's the "Last One Picked" hitting a Sid Crosby slapshot; it's "Beauty From Pain" tears turning a beast into a prince; it's "Karaoke Superstars" turning Average Daves into American idols. It's the musical realization that you can't just believe in your gifts; you need to rock 'em.

In fact, the album is loaded enough for three lead singles at different radio formats. The CHR power ballad "Hold" offers a cloud of pianos, violins and electric guitars over which the girls cry out, "I need a hand to hold, to hold me from the edge." The stirring AC confessional "Crawl (Carry Me Through)" takes a softer yet no less dramatic approach in its prayer for strength, and "Hey Hey" is a rock rallying call with fiery guitar chords, defiant attitude and female gang vocals that challenge, "Why kiss the feet of the people who kick you?"

"It stands true to your traditional Superchick," says Melissa. "We all stand together, embrace our beauty, encourage each other and feel good about it."

In making Rock What You Got, Superchick found the best way to rock its own gifts was a return to the indie mindset of its debut. Max explains, "We made our first album without any outside interference so we could try and do whatever we wanted, and that record is fairly creative for that reason. This time around, instead of trying to guess what the market would want, we went back to where we started and did whatever we wanted to do on Rock What You Got."

One such example - as heard on upbeat rockers like "So Beautiful," "Cross the Line," "Alive" and "Rock What You Got" - was demonstrating the girls' affinity for the Sarah Conno-Ellen Ripley era. "Back in the '80s, women were more about empowerment and being strong, and they didn't have to fit into the mold of just being sex symbols," says Tricia. "Vocally, we went more in that direction: rawer and pushing out the range, yet still carrying what we are."

Rock What You Got also features the hard-to-find radio version of "Stand in the Rain," which spent a record 13 straight weeks at No. 1, and the old school, Eddie Van Halen-channeling "Dave Ghazarian: Guitar Hero."

Adding to the album's edge, Superchick wrote the new songs against a backdrop of personal hardship. In the past few years, band members faced painful relationship splits and cancer touched four of their families.

Still, while the last album sought to empathize with listener pain, Rock What You Got is the battle cry to charge forward.

"This album is about empowerment and hope," says Matt. "Don't be afraid to cross the lines that people put up to limit you when you know you are better than that."

Or as Max puts it, "This album calls on people to wake up and find their destiny."

Rock What You Got's message reminds people that Einstein didn't withdraw when his headmaster said he'd "never amount to much," and Beethoven didn't give up when his music teacher called him "hopeless." These people didn't just believe in their gifts, they rocked them out!

If Karaoke Superstars introduced the idea of a "One Girl Revolution," it's Rock What You Got that proclaims, "The revolution starts when you cross the line." 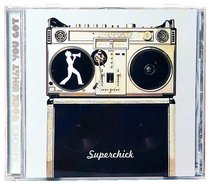 1. Rock What You Got

Superchick
Rock What You Got - DISC 1

The music of Chicago rockers, the sister-fronted Superchick, incorporates various styles such as punk, rock, rap, and R and B. Superchick made its debut in 1999 at an Audio Adrenaline concert in front of an audience of 5,000. They continued to perform at live events throughout that year, self-releasing their first album in 2000. The album was re-released with three added remix tracks after they signed to Inpop Records, and became their first official album: Karaoke Superstars. Since then, their music has appeared in several movies and television shows, including the movie Legally Blonde. Their recent and most successful album was Beauty from Pain 1.1. Their music has received favorable reviews in both Christian and mainstream publications. Their latest and most anticipated release is Rock What You Got.

Wholehearted
We Are Messengers
CD