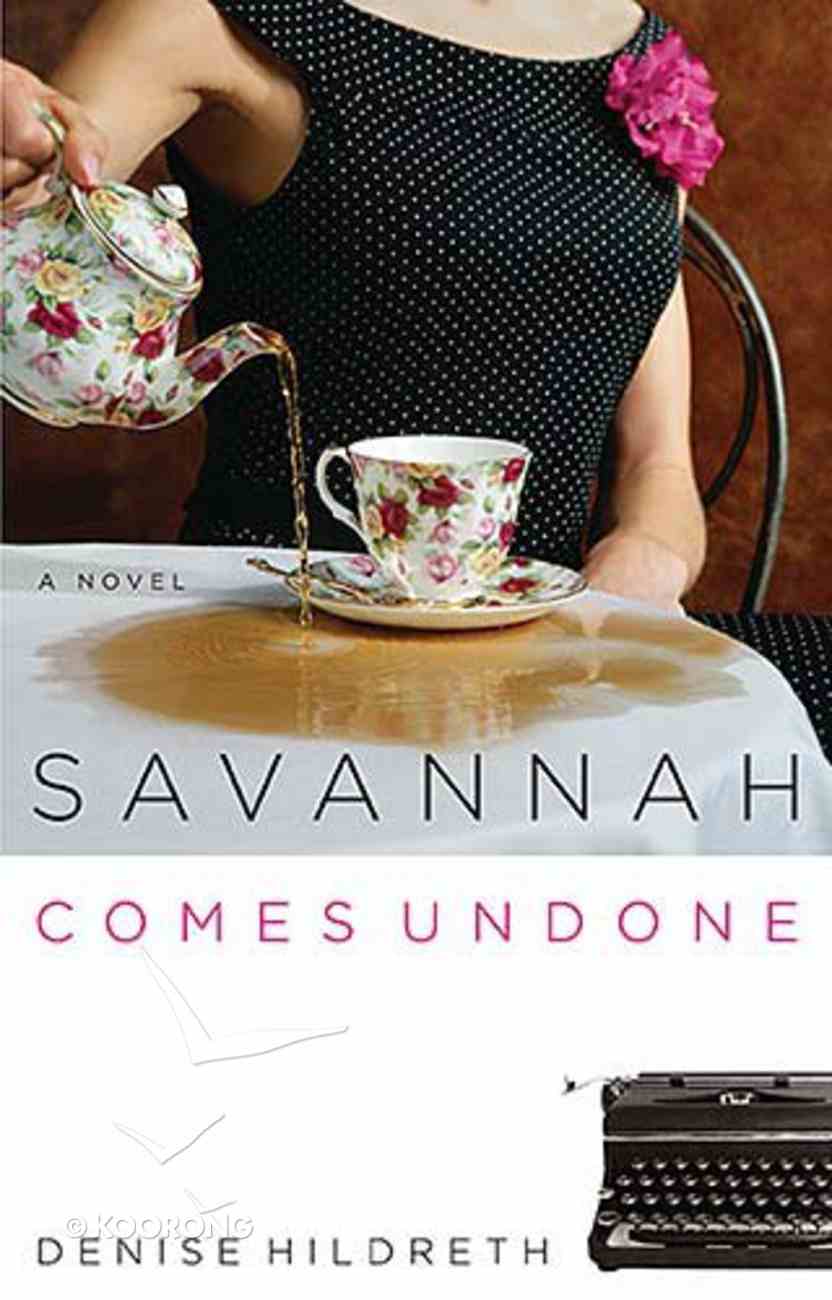 When Savannah's "drama queen" mother chains herself to a town landmark and becomes the lead story on the six o'clock news, Savannah takes it like a southern lady---and that "ain't" sitting down! Fans of Savannah from Savannah will rejoice to...

The Will of Wisteria
Denise Hildreth Jones
Paperback

The Will of Wisteria
Denise Hildreth Jones
eBook

When Savannah's "drama queen" mother chains herself to a town landmark and becomes the lead story on the six o'clock news, Savannah takes it like a southern lady---and that "ain't" sitting down! Fans of Savannah from Savannah will rejoice to see this hilarious heroine back in another laugh-out-loud romantic adventure. 320 pages, softcover from WestBow.
-Publisher

Seeing my mother as the lead story on the six o'clock news was no great cause for alarm...until the camera revealed her chained to a downtown monument
-Publisher

DENISE HILDRETH is a novelist and international speaker. She has spoken for the last ten years to women's ministries, churches and for the Billy Graham Evangelistic Association. Denise began her career over seventeen years ago writing for other people. She eventually ventured into the world of fiction with her first novel, Savannah from Savannah, and has since published several books. Her novels have been featured in Southern Living; hailed as "smart and witty" by Library Journal; and chosen for the pulpwood Queen's and Women of Faith book clubs.ý ý


My mother is in chains. Chained to what or for what I have no idea. Thomas only said, "Mother is chained to it."


I looked down at the denim bow that tied up my wrap dress. It was slightly tilted, so I straightened it. Now, the bow is an amazing accessory, the way it holds things together. Tying a bow is one of the first achievements of childhood. How unfair: a child, learning how to hold things together. I traced the perfectly symmetrical loops with my index fingers. I thought of childhood and sanity.


The phone rang. Again. I jumped. I snatched up my ringing satchel off the hood of Old Betsy and found my phone conveniently resting on the bottom.


"Where are you?" my younger brother, Thomas, asked.


"You said that five minutes ago."


I plopped into the driver's seat. "Are you the clock police?"


"Get down here now. Are you a human-interest writer or not?"


Welcome to my world. The world of Savannah, where a mother in chains for any reason is no great cause for my alarm.


I pointed my declining Saab away from the newspaper office and toward the courthouse. Something off-kilter hovered in the muggy Savannah humidity. Today I suspected something other than the steamy afternoon sun lured people outside their stores, cooling themselves with makeshift fans. I was certain it had to do with "the woman in chains."


A plump, elderly, floral blur almost attached herself to my front bumper. "Watch where you're going!" I hollered at the closed window. She scampered on up the street, oblivious to the fact that she had narrowly escaped a lovebug's fate.


As I tried to pull up to Wright Square--where both Dad's coffee shop and the U.S. Courthouse stand--I encountered an impassable bottleneck of cars, SUVs, trolleys, and a few unhappy horses toting gawking spectators. This jam was a phenomenon not even experienced on parade day, because cars aren't allowed into the historical district on parade day. But today Savannah had apparently plunged into the depths of downright delirium.


I pulled into the covered parking place at the back of Jake's. My little brother (or rather, younger brother; the child stands six feet tall and towers over my five-foot-four-inch frame like a bamboo stalk over a tulip) snatched open the car door.


"Vanni, get out of the car! You've got to get to the courthouse."


"I've been looking for you for fifteen minutes."


"You only called five minutes ago."


"I called you twice." He grabbed my arm and slammed the door behind me. Thomas, the only one in the world allowed to call me Vanni, dragged me out of the alley and onto the sidewalk in the direction of the courthouse. "What were you doing anyway?"


"I have a job, Thomas. An important job. I have things to finish up before I can just run from my office and jump to the streets."


"Give me a break. You were probably checking your hair."


I would die a thousand deaths before admitting how close he was to the truth.


"Just come on, because you are not going to believe what Mom has done!"


I tried to keep pace with him and actually talk at the same time. "Trust me, I'll believe it. And slow down, I don't run well in heels."


"You shouldn't be wearing heels. The combination is dangerous to society. And trust me, sweet child, you would never have guessed what you're about to see."


We turned the corner and met a scene not witnessed since Tom Hanks sat on a bench and ate a box of chocolates. I could hardly even catch a glimpse of the marble courthouse for the mass of people gathered around something--or dare I say someone--in front of it. ABC and NBC news trucks had arrived. People milled and jabbered like schoolchildren at recess.


We took refuge from the blazing sun with fifteen other shameless gawkers under a live oak near the edge of the square.


"You bet your sweet britches she's in the middle of that."


"Move? Are you kidding? We haven't had this much excitement, since . . . well, since Mom tried to pass that law to neuter all golden retrievers."


"I believe the opposition defined her actions as 'discriminatory.'"


"You should know"--he gave me a beautiful white smile and winked a green eye at me--"Ms. Opposition."


"Just because Duke isn't a lapdog doesn't mean she can ruin his existence." I said, looking around for the golden retriever that had been my mother's nemesis since the day Dad brought him home. "Where is Duke anyway?"


"Tucked away inside Dad's shop."


"Lucky boy. What did he do? Go potty on her Persian again?"


"No, he just can't endure both this squelching heat and Mom. A dog can only take so much in one afternoon." Odd but true: Duke had no idea he was actually a dog.


We moved along the sidewalk that passes in front of the courthouse, and a few people parted enough for me to make out the lovely vision I left less than an hour ago after a perfectly normal lunch at The Lady & Sons. Her blue capri slacks and floral Kate Spade mules came into view before her face did.


"Does she have a chain wrapped around her?"


Thomas laughed and folded his arms across his chest. "Yes, that would be a chain."


"What's that big stone thing that she's attached to?" I asked, not certain I wanted to know.


"That, my friend, is a six-thousand-pound stone monument of the Ten Commandments."


"Judge Moore called him earlier actually. Right before I left Judge Hoddicks's office." Thomas wiped the beading sweat off of his forehead and pushed it up through his short, sun-kissed brown hair. "Judge Hoddicks says the case belongs to the people, not the courts. So he wants to keep it in the limelight."


"Is there a reason he's not chained to it instead of Mother?" I watched Mother's beaming smile shine over all. She flitted her head from side to side as if she were ringmaster of this circus.


I looked down at my own pretty shoes, trying to avoid the eyes of the very woman who had purchased them. "And Jake said?"


"Haven't heard yet. You can ask him yourself." He pointed to Dad, who was standing on the right set of stairs that entered the courthouse. He was talking to Judge Hoddicks and smiling.


Dad caught Thomas's delighted smile and my mortified stare and winked. My gaze followed his secure gait as he walked over to my mother, whispered in her ear, gave her a kiss on the cheek, and brought his striking six-foot-one frame our way.


Dad patted me on my shoulder and was about to walk past me. "Where are you going?"


"Back to work! You've got to be kidding me!" I chuckled. He matched my chuckle with his own.


"You mean you're going to leave her here, strapped to a piece of stone, to be aired on the nightly news? Our reputation will be left here on the sidewalk to be feasted on by water bugs!" I added extra effect to my statement by crushing the water bug that had bravely, yet stupidly, made its way to my area of the sidewalk.


He kissed me on my cheek then brushed his hands through his slightly graying brown hair. "Yes, that's exactly what I'm going to do."


I stared at the disappearing image of my father as he casually sauntered back to his world of coffee and calm, khakis and polo shirts. My father, at the age of fifty-four, had indisputably gone insane. "But . . . how . . . why?" I turned my face upward. "Why me, Lord?"


"Take it easy, Vanni. You've got a story and we've got drama," Thomas said, patting me on the back and heading over to our mother like an overgrown adolescent enjoying the spotlight.


"But I don't need drama." I called out, gesturing to no one in particular. "Really, I can create my own. Who needs extra?"


But then extra arrived. Amber Topaz Childers, the reigning Miss Savannah United States of America, came up from behind and goosed me. I screeched. She giggled. And her aqua-colored eyes, a combination of natural brown irises and artificially colored contact lenses, made taking her serious very difficult.


"Is this not the most exciting thing ever?" she squealed.


"Right up there with an enema," I muttered.


"Right up there with a what?" She crinkled her perfect nose.


"Right up there with an evening at the cinema."


"Oh my word. Are you telling me you, Savannah Phillips"--as if my name were lost on me--"have had more exciting times than this?"


"All with your mother?"


"Are you the luckiest girl alive or what?"


"Or what." I looked at this beauty in her little pink pantsuit with matching lipstick and earrings. She could have been mistaken for a flamingo had her hair not been quite so . . . shall we say, lively. But even it was held back with a matching pink grosgrain ribbon.


And with nothing more to say, she flounced along to meet the other present reigning royalty. The former Miss Georgia United States of America. Mrs. Victoria Phillips. Vicky. My mother.


Every other eye was glued to the vision in blue gracefully chained to a monument in the middle of my city. And in one moment of horror, the vision saw me and waved. A few people turned to see who had her attention. I turned with them, hoping it was clear that I didn't know the fettered beauty in front of me. But then she called my name.


"Savannah, darling. Savannah! Yoo-hoo!" She waved like a maniacal Barbie. Amber tried to help her get my attention. It was painful for all involved.


I hoped these people would think the woman just wanted to say hello to her city, Savannah, while the cameras were rolling. I didn't lift my eyes to check on their potential gullibility. But I did notice my bow had come undone. And my dress flap had flown open and exposed my slip. I jerked it closed and held it together in my fist.


"This day had better be no reflection of my week to come," I warned the heat. It laughed. Yes, I'm certain it laughed.