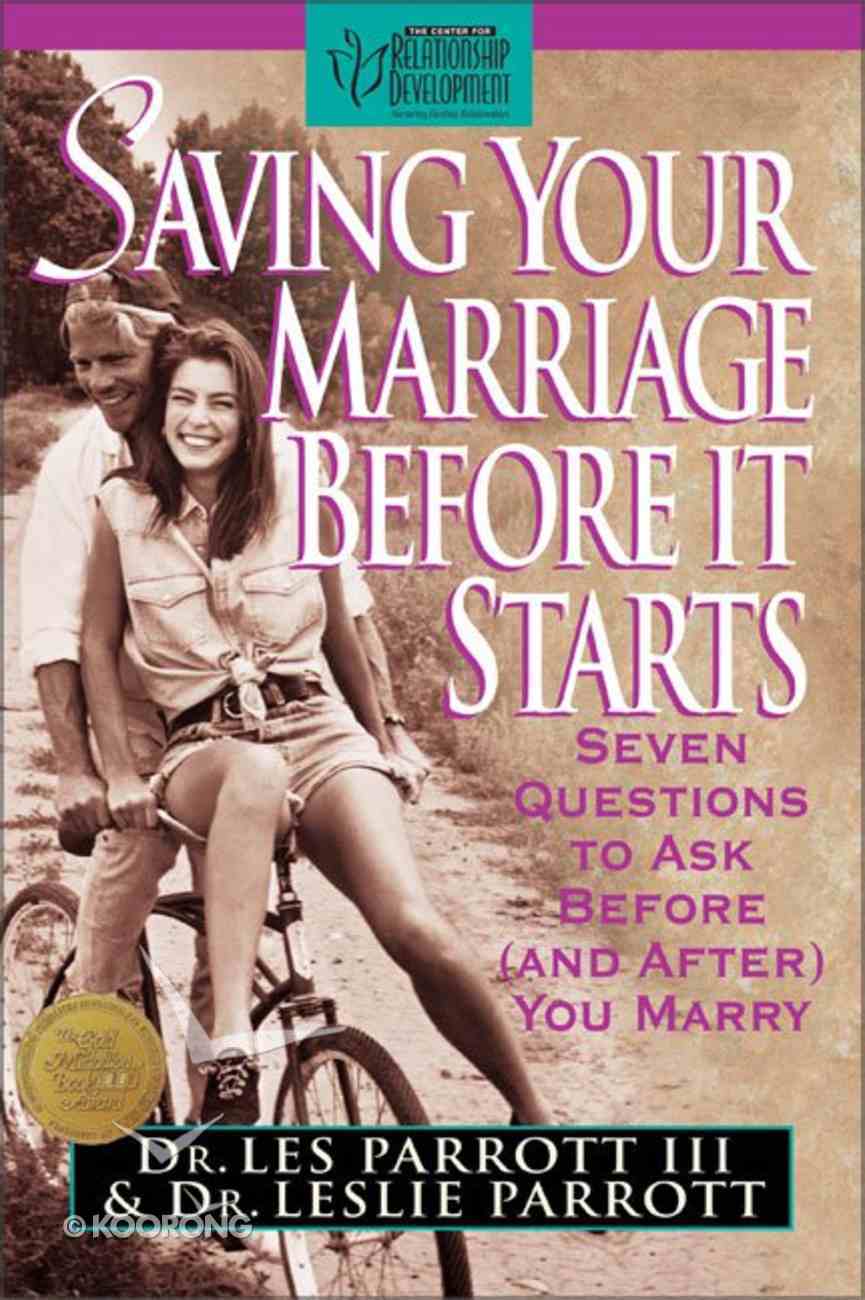 Saving Your Marriage Before It Starts

Les and Leslie ParrottThis practical book will help you identify and overcome the stumbling blocks toa healthy marriage - before you trip over them. 208 pages, from Zondervan.

Ready Or Knot?: 12 Conversations Every Couple Needs to Have Before Marriage
Scott Kedersha
Paperback

Before You Plan Your Wedding...Plan Your Marriage
Greg Smalley, Erin Smalley
eBook

My Heart Got Married and I Didn't Know It
Lora C Jobe, Barbara U Prescott
eBook

Getting Ready For the Wedding
Les Parrott, Leslie Parrott
eBook

Les and Leslie ParrottThis practical book will help you identify and overcome the stumbling blocks toa healthy marriage - before you trip over them. 208 pages, from Zondervan.

Are you tired of marriage books that sound like they were written thirty years ago? Do you want real, honest advice from a couple who knows the hopes and struggles of today's couples? Do you want to build a marriage that will last a lifetime? Saving Your Marriage Before It Starts is the first comprehensive marriage preparation program specifically designed for today's couples. And it's the first program for couples developed by a couple. And Les Leslie Parrott are no ordinary couple. As marriage counselors and teachers, they're on the cutting edge of marriage research and education. Each year they teach a blockbuster relationships course to hundred of college students They see the struggles and dreams of couples up close. And they reveal the flaws and foibles of their own relationship in order to show how challenging--and rewarding -- marriage can be. Most importantly, however, Les and Leslie Parrott share a dream: to equip couples in their twenties and thirties to prepare for lifelon
-Publisher

1. Have You Faced The Myths Of Marriage With Honesty? 2. Can You Identify Your Love Style? 3. Have You Developed The Habit Of Happiness? 4. Can You Say What You Mean And Understand What You Hear? 5. Have You Bridged The Gender Gap? 6. Do You Know How To Fight A Good Fight? 151 Pages
-Publisher

Question One:Have You Faced the Myths of Marriage with Honesty?Tom and Laura came to see us just nine months after their wedding. They had swallowed the happily-ever-after myth whole and were now feeling queasy. "Before we got married we couldn''t bear to be apart from one another," Laura confided. "We did almost everything together, and I thought that''s how it would be in our marriage, even more so." She paused for a moment. "But now Tom needs more space. It seems like he''s not the guy I married."Tom rolled his eyes as Laura continued: "He used to be so considerate and thoughtful before we were married""Oh, and I''m a total slouch now?" Tom interrupted."Of course not, you or maybe we are just different now."Nervously twisting his wedding band, Tom looked at Laura: "Marriage isn''t what I expected either. I didn''t expect it to be a big honeymoon or anything; I just thought you would try to make life a little easier for me. Instead, when I come home from the office, all you want is to go out or""I make dinner every night for you," Laura interrupted.Surprised by their display of unrestrained emotion in front of us, they stopped silent and looked to us as if to say, "See, our marriage isn''t what it''s supposed to be."Tom and Laura entered their marriage believing that happiness would abound. They had heard that marriage was hard work, but they didn''t expect it to be a twenty-four-hour, seven-day-a-week job.The belief in a happily-ever-after marriage is one of the most widely held and destructive marriage myths. But it is only the tip of the marital-myth iceberg. Every difficult marriage is plagued by a vast assortment of misconceptions about what marriage should be.1 In this chapter, however, we consider only those ideas that are most harmful and most common:1. "We expect exactly the same things from marriage."2. "Everything good in our relationship will get better."3. "Everything bad in my life will disappear."4. "My spouse will make me whole."The goal of this chapter is to take the mythology out of marriage. For too long, marriage has been saddled with unrealistic expectations and misguided assumptions. Liberated from these four myths, couples can settle into the real world of marriage with all its joys and sorrows, passion and pain.Myth One: "We Expect Exactly the Same Things from Marriage"What we anticipate seldom occurs, what we least expect generally happens, especially in marriage. Saying "I do" brings with it a host of conscious and unconscious expectations that aren''t always fulfilled.Neil and Cathy, a couple in their late twenties and married for four years, each had a clear image of what life together would be like, but they had never discussed their ideas. They, like most newlyweds, simply assumed the other had an identical picture of marriage in mind. Nothing, however, could have been further from the truth.Cathy: "I expected married life to bring more stability and predictability to our lifestyle. To me it meant working in the garden together."Neil: "I wanted our marriage to be exciting and spontaneous, not a ho-hum routine. To me it meant riding a motorcycle together."As far back as early childhood, Neil and Cathy began dreaming of how married life would be. They grew up in homes where parents modeled "married life." They read books describing loving relationships. They watched television shows and movies depicting scenes from marriage. For years they had fantasized about life after crossing the threshold. With little effort, each had formed an idea of what it would and should be like to live as a married couple.Consciously and unconsciously, Neil and Cathy painted brushstrokes on their mental marital canvases. But it never occurred to either of them that the other might be working from a different palette. They simply assumed their life-long partner would work with complementary colors and in a similar style.The first year of marriage, however, revealed sharp and unexpected contrasts. What Cathy thought of as security
-Publisher

Ready Or Knot?: 12 Conversations Every Couple Needs to Have Before Marriage
Scott Kedersha
Paperback

In the Sight of God (Workbook)
Gordon Cheng
Paperback