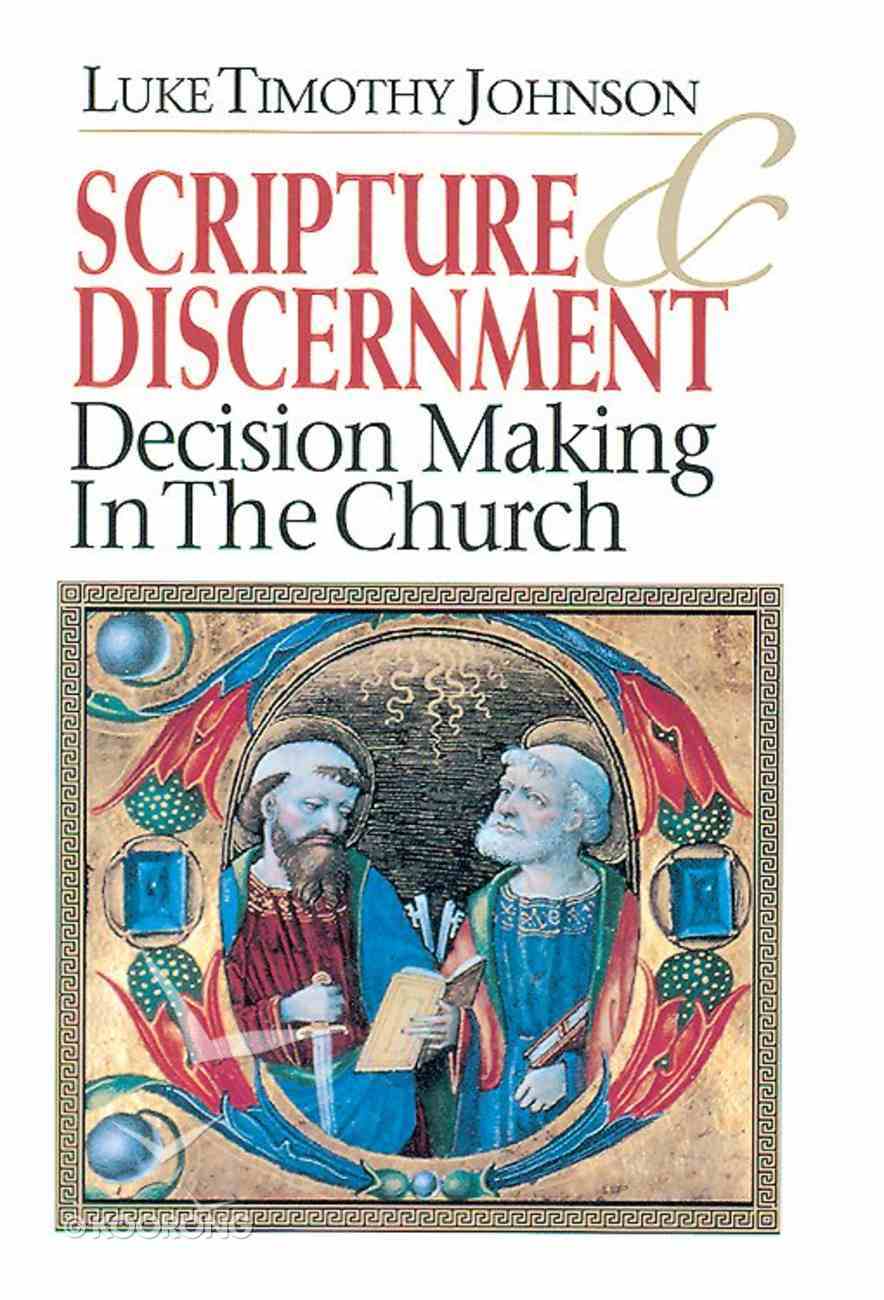 Posits the idea that a correspondence should exist between what the church believes and what it actually does.

Building a House For All God's Children
Jeffrey Rogers
Paperback

Posits the idea that a correspondence should exist between what the church believes and what it actually does.
-Publisher

This work is a revision and expansion of Luke Timothy Johnson's earlier work, Decision Making in the Early Church: A Biblical Model. Here he expands his earlier thoughts on the biblical text and decision making in the church. Often, churches simply attempt to turn to the Scripture for support of their decisions. Johnson argues, however, that there are so many complex issues that are not directly addressed in the Scriptures that a closer look at how decisions were made in the early church is needed for a complete picture of the decision making process. Looking, then, at the early events of Acts, Johnson shows how discernment is critical to correctly interpret Scripture for church decisions. Luke Timothy Johnson is Robert W. Woodruff Professor of New Testament and Christian Origins at Candler School of Theology, Emory University, Atlanta, Georgia.
-Publisher

Luke Timothy Johnson begins his study of the practical issue of how decisions are made in the church by admitting to a bias: that there ought to be a connection between what the church claims to be, and how it does things. Because the church claims to be a community of faith, it does not reach decisions simply on the basis of good management policy, or the analysis of market trends, or efficiency, or even ideological consistency, but in response to God's activity in the world that presses upon us and urges us to decision.


Faced with how to respond to God's leading, the church decides what to do on the basis of two realities: Scripture and discernment. Because it calls the church into being Scripture is the fundamental authority in the church's life. Yet it is not enough for a congregation simply to turn to the Bible when a decision must be reached, for Scripture does not directly address all issues which face the church today, and those it does often reflect greatly differing historical and social contexts than our own.


Thus, added to the authority of Scripture in the church's decision making is a process of discernment, in which the members of the community--under the guidance of the Holy Spirit--recall how God has worked in their lives as individuals and as a community and discern together God's direction for the future. Johnson argues that this very pattern of decision making can be found in Scripture itself, notably in one of the central events of the book of Acts. Beginning with the conversion of Cornelius and culminating in the Apostolic Council of Acts 15, we see how a string of smaller narratives combine to tell the story of God's movement within their midst, and how this narrative became the basis for the reinterpretation of Scripture and the inclusion of Gentiles into the fellowship of the church.


Looking at a number of thorny issues facing the contemporary church, Johnson demonstrates how the interaction of Scripture and discernment can and must become the basis for how we respond to the decisions with which the church wrestles today.

Luke Timothy Johnson (Ph.D., Yale University) is Robert W. Woodruff Professor of the New Testament and Christian Origins at the Candler School of Theology, Emory University. A Roman Catholic, Johnson was a Benedictine monk and priest before becoming a biblical scholar. He is the author of several scholarly books and has written for Commonwealth and Christian Century.
Some of his many books include Hebrews: A Commentary (New Testament Library); Brother of Jesus: Friend of God (Wm. B. Eerdmans); The First and Second Letters to Timothy (Anchor Bible: Yale Universtiy Press 2001); Living Jesus: Learning the Heart of the Gospel (HarperOne 1999); Reading Romans: A Literary and Theological Commentary (Crossroads Press 1997); Letters to Paul's Delegates: A Commentary on 1 Timothy, 2 Timothy and Titus (1996); The Real Jesus: The Misguided Quest for the Historical Jesus and the Truth of the Traditional Gospels (HarperOne 1996); The Letter of James (Anchor Bible: The Doubleday Religious Press 1995);The Acts of the Apostles (Liturgical Press 1992) and Luke (Liturgical Press 1991).
Koorong -Editorial Review.