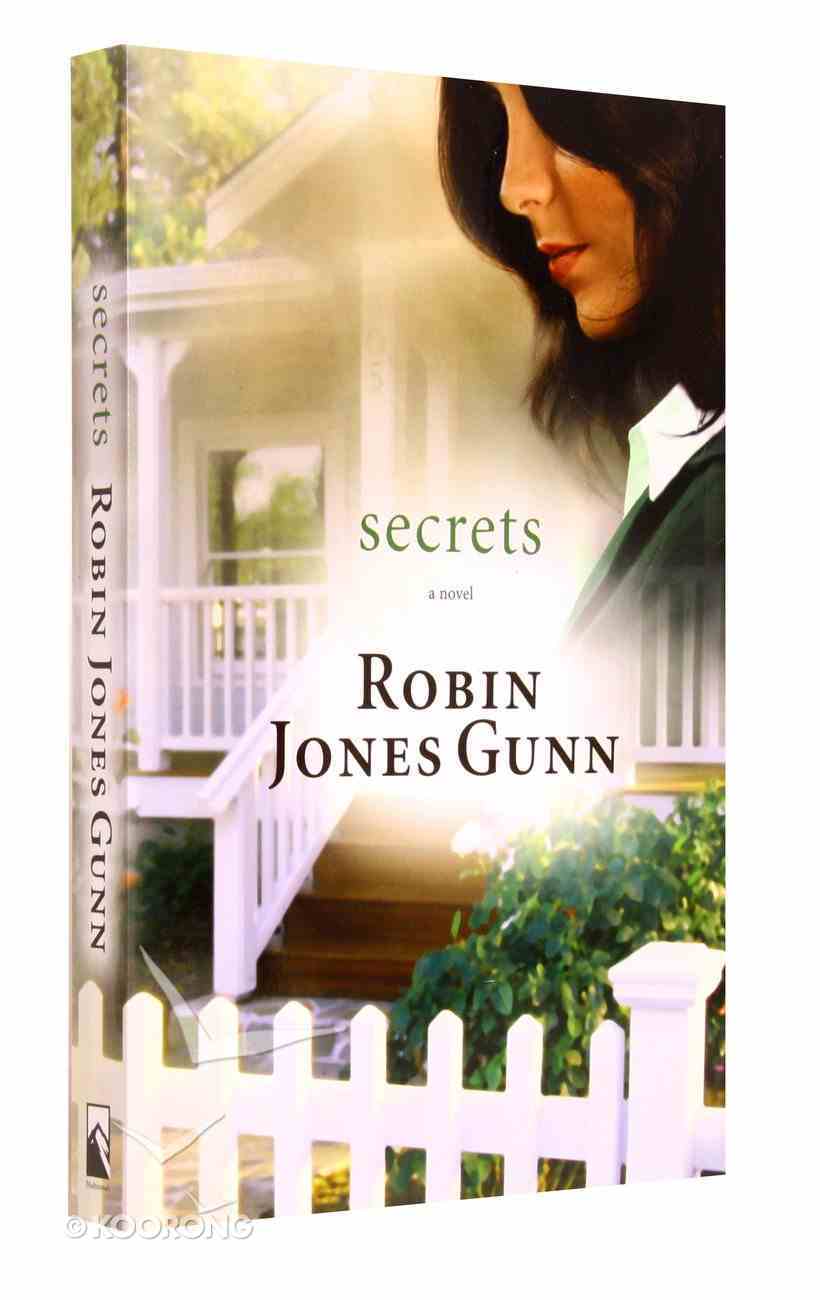 The Glenbrooke Series ^Jessica ran from her past...but can she hide from love? ^Jessica Morgan wants desperately to forget the past and begin a new life. She chooses a small, peaceful town tucked away in Oregon's Willamette Valley as the...

The Glenbrooke Series ^Jessica ran from her past...but can she hide from love? ^Jessica Morgan wants desperately to forget the past and begin a new life. She chooses a small, peaceful town tucked away in Oregon's Willamette Valley as the place to start over--Glenbrooke. Once there, Jessica conceals her identity from the intriguing personalities she meets--including the compassionate paramedic who desires to protect her and the jealous woman who wants nothing more than to destroy her. ^Will Jessica's deceit ruin all hope for the future? Or will she find a deeper peace that allows her to stop hiding the truth from those who love her most of all? ^This heartwarming bestseller, book one in the Glenbrooke series, introduces the fascinating people of Glenbrooke in a compelling tale of romance and spiritual truth.
-Publisher

Beginning her new life in a small Oregon town, high school English teacher Jessica tries desperately to hide the details of her past. Yet two individuals remain determined to discover the painful truth: the jealous woman who is Jessica's immediate superior, and Kyle Buchanan, a handsome, compassionate paramedic and dreamer. Will Jessica's past destroy her future? Or can she find a deeper peace that will end her need to keep Secrets? Readers will find out in this bestselling former Palisades release, now the first book of the new Glenbrooke series by bestselling author Robin Jones Gunn. Jessica ran from her past...but can she hide from love? Jessica Morgan wants desperately to forget the past and begin a new life. She chooses a small, peaceful town tucked away in Oregon rs"s Willamette Valley as the place to start over-Glenbrooke. Once there, Jessica conceals her identity from the intriguing personalities she meets-including the compassionate paramedic who desires to protect her and the jealous woman who wants nothing more than to destroy her. Will Jessicars"s deceit ruin all hope for the future? Or will she find a deeper peace that allows her to stop hiding the truth from those who love her most of all? In this new release of the heartwarming bestsellerSecrets,now Book One in the Glenbrooke series, Robin Jones Gunn reintroduces the fascinating characters who have captured the imaginations of readers across the country. Revel once again in the lives and loves of the people of Glenbrooke in this compelling tale of romance and spiritual truth.
-Publisher

Jessica Morgan gripped her car&rsquo;s steering wheel and read the road sign aloud as she cruised past it. &ldquo;Glenbrooke, three miles.&rdquo;

The summer breeze whipped through her open window and danced with the ends of her shoulder-length, honey-blond hair.

&ldquo;This is it,&rdquo; Jessica murmured as the Oregon road brought her to the brink of her new life. For months she had planned this step into independence. Then yesterday, on the eve of her twenty-fifth birthday, she had hit the road with the back seat of her used station wagon full of boxes and her heart full of dreams.

She had driven ten hours yesterday before stopping at a hotel in Redding, California. After buying Chinese food, she ate it while sitting cross-legged on the bed watching the end of an old black-and-white movie. Jessica fell asleep dreaming of new beginnings and rose at 6:30, ready to drive another nine hours on her birthday.9

I&rsquo;m almost there, she thought. I&rsquo;m really doing this! Look at all these trees. This is beautiful. I&rsquo;m going to love it here!

The country road meandered through a grove of quivering willows. As she passed them, the trees appeared to wave at her, welcoming her to their corner of the world. The late afternoon sun shot between the trees like a strobe light, striking the side of her car at rapid intervals and creating stripes. Light appeared, then shadow, light, then shadow.

As Jessica drove out of the grouping of trees, the road twisted to the right. She veered the car to round the curve. Suddenly the bright sunlight struck her eyes, momentarily blinding her. Swerving to the right to avoid a truck, she felt her front tire catch the gravel on the side of the road. Before she realized what was happening, she had lost control of the car. In one terrifying instant, Jessica felt the car skid through the gravel and tilt over on its side. Her seat belt held her fast as Jessica screamed and clutched the steering wheel. The car tumbled over an embankment, then came to a jolting halt in a ditch about twenty feet below the road. The world seemed to stop.

Jessica tried to cry out, but no sound came from her lips. Stunned, she lay motionless on her side. She quickly blinked as if to dismiss a bizarre daydream that she could snap out of. Her hair covered half her face. She felt a hot, moist trickle coursing down her chin and an acidic taste filling her mouth. I&rsquo;m bleeding!

Peering through her disheveled hair, Jessica tried to focus her eyes. When her vision began to clear, she could make out the image of the windshield, now shattered, and the mangled steering wheel bent down and pinning her left leg in place.

Through all the cotton that seemed to fill her head, Jessica heard a remote crackle of a walkie talkie and a male voice in the distance saying, &ldquo;I&rsquo;ve located the car. I&rsquo;m checking now for survivors. Over.&rdquo;

I&rsquo;m here! Down here! Help! Jessica called out in her head. The only sound that escaped her lips was a raspy, &ldquo;Ahhgg!&rdquo; That&rsquo;s when she realized her tongue was bleeding and her upper lip was beginning to swell.

&ldquo;Hello in there,&rdquo; a male voice said calmly. The man leaned in through the open driver&rsquo;s window, which was now above Jessica on her left side. &ldquo;Can you hear me?&rdquo;

&ldquo;Yeath,&rdquo; Jessica managed to say, her tongue swelling and her jaw beginning to quiver. She felt cold and shivered uncontrollably.

&ldquo;Don&rsquo;t try to move,&rdquo; the deep voice said. &ldquo;I&rsquo;ve called for help. We&rsquo;ll get you out of there. It&rsquo;s going to take a few minutes, now, so don&rsquo;t move, okay?&rdquo;

Jessica couldn&rsquo;t see the man&rsquo;s face, but his voice soothed her. She heard scraping metal above her, and then a large, steady hand touched her neck and felt for her pulse.

&ldquo;You had your seat belt on. Good girl,&rdquo; he said. The walkie talkie crackled again, this time right above her.

&ldquo;Yeah, Mary,&rdquo; the man said. &ldquo;We have one female, midtwenties, I&rsquo;d say. Condition is stable. I&rsquo;ll wait for the ambulance before I move her. Over.&rdquo;

Jessica felt his hand once more, this time across her cheek as he brushed back her hair. &ldquo;How ya&rsquo; doin&rsquo;? I&rsquo;m Kyle. What&rsquo;s your name?&rdquo;

&ldquo;Jethica,&rdquo; she said, her tongue now throbbing. From the corner of her eye she caught a glimpse of dark hair and a tanned face.

&ldquo;I saw your car just as it began to roll. Must have been pretty scary for you.&rdquo;

Jessica responded with a nod and realized she could move her neck painlessly. She slowly turned her head and looked up into her rescuer&rsquo;s face. Jessica smiled with surprise and pleasure when she saw his green eyes, straight nose, windblown dark hair, and the hint of a five o&rsquo;clock shadow across his no-nonsense jaw. With her smile came a stabbing throb in her top lip and the sensation of blood trickling down her chin.

&ldquo;So, you can move a little, huh?&rdquo; Kyle said. &ldquo;Let&rsquo;s try your left arm. Good! That&rsquo;s great. How do your legs feel?&rdquo;

Jessica tried to answer that the right one felt okay, but the left one was immobile. Her words came out slurred. She wasn&rsquo;t sure exactly what she said. Her jaw was really quivering now, and she felt helpless.

&ldquo;Just relax,&rdquo; Kyle said. &ldquo;As soon as the guys arrive with the ambulance, we&rsquo;ll get you all patched up. I&rsquo;m going to put some pressure on your lip now. Try breathing slowly and evenly like this.&rdquo; Kyle leaned toward her. His face was about six inches from hers. He began to breathe in slowly through his nose and exhale slowly through his mouth. The distinct smell of cinnamon chewing gum was on his breath, which she found strangely comforting.

Jessica heard the distant wail of an approaching siren. Within minutes she was in the middle of a flurry of activity. Some of the men began to stabilize the car while several others cut off the door to have more room to reach her. Soon a team of steady hands undid Jessica&rsquo;s seat belt, removed the steering wheel, and eased her body onto a long board. They taped her forehead to the board so she couldn&rsquo;t move her head, and one of the men wrapped her in a blanket. They lifted the stretcher and with sure-footed steps walked up the embankment and carried her to the ambulance.

Jessica felt as if her eyelids weighed a hundred pounds. They clamped shut as her throbbing head filled with questions.

Why? Why me? Why now, right on the edge of my new beginning?

With a jolt, the men released the wheeled legs on the stretcher and slid Jessica into the back of the ambulance. One of them reached for her arm from underneath the blanket, and running a rough thumb over the back of her left hand, he asked her to make a fist.

Another paramedic spoke calmly, a few inches from her head, &ldquo;Can you open your eyes for me? That&rsquo;s good. Now can you tell me where it hurts the most?&rdquo;

&ldquo;It&rsquo;s her left one.&rdquo; Jessica recognized Kyle&rsquo;s strong voice. His hand reached over and pressed against her upper lip once more.

The siren started up, and the ambulance lurched out onto the road and sped toward the Glenbrooke hospital.

As the stretcher jostled in the ambulance, the paramedic holding Jessica&rsquo;s left hand said, &ldquo;Keep your fist. This is going to pinch a little bit.&rdquo; And with that an IV needle poked through the bulging vein on the top of her hand.

She felt a soft cloth on her chin and lips and opened her eyes all the way. Kyle smiled at her. With one hand he pressed against her lip, and with the other he wiped the drying blood from her cheek and chin.

&ldquo;Can you open your mouth a little? I need to put this against your tongue,&rdquo; he said, placing a swab of cotton between her tongue and cheek. &ldquo;The bleeding looks like it&rsquo;s about to stop in there. Now if we can only get your lip to cooperate, you&rsquo;ll be in good shape. We&rsquo;ll be at the hospital in a few minutes. You doing okay?&rdquo;

Jessica tried to nod her head, but the tape across her forehead held her firmly in place. She forced a crooked, puffycheeked smile beneath the pressure of his hand on her lip.

Jessica felt ridiculous, trying to flirt in her condition. Here was the most handsome, gentle man she had ever laid eyes on, and she was a helpless mess.

He&rsquo;s probably married and has six kids. These guys are trained to be nice to accident victims.