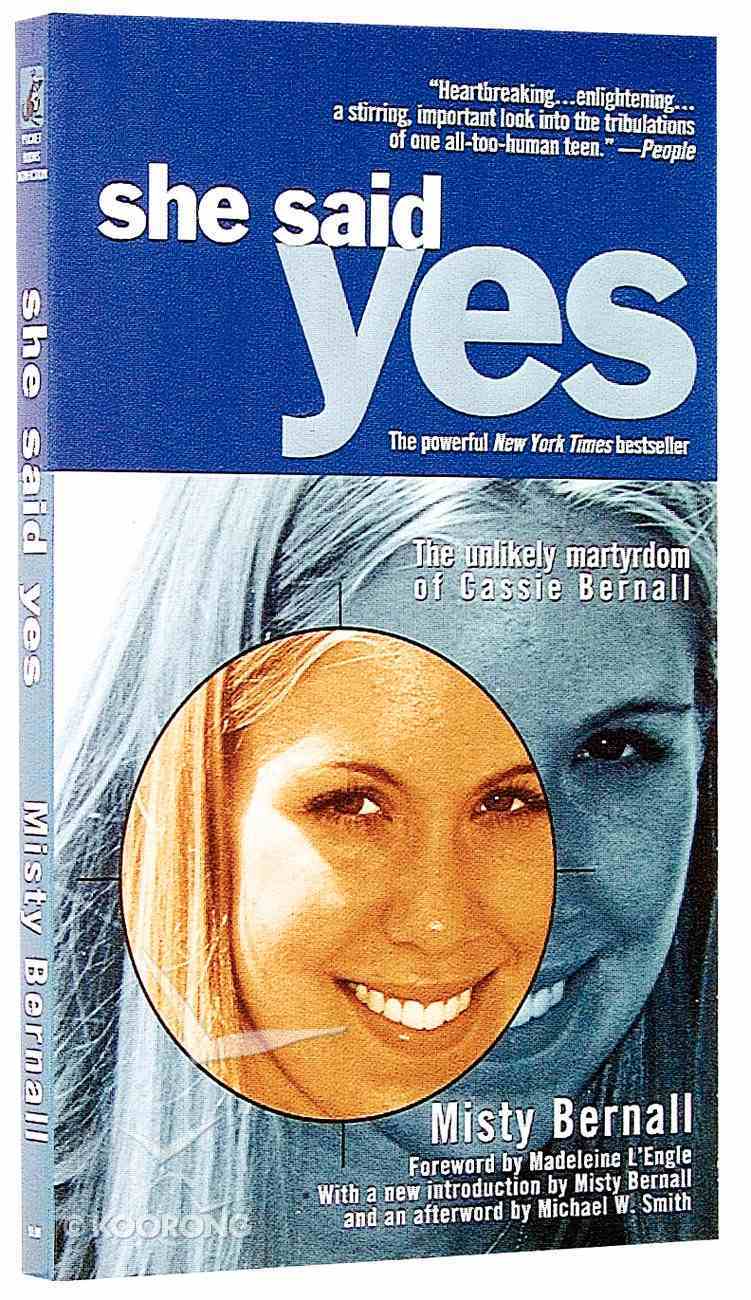 After the massacre at Columbine High School in Littleton, Colorado, Cassie Bernall was dubbed a martyr. Cassie's mother tells the story of a complex young woman who at one point had started down a troubled path similar to that of...

After the massacre at Columbine High School in Littleton, Colorado, Cassie Bernall was dubbed a martyr. Cassie's mother tells the story of a complex young woman who at one point had started down a troubled path similar to that of her killers.

"One of the most gripping stories to come out of the shooting at Columbine High School"^is told in the acclaimed national bestseller that illuminates the most remarkable aspect of 17-year-old Cassie Bernall's tragic death: her life.^"She Said Yes" is an "intense and fascinating memoir" "(Publishers Weekly)" of an ordinary teenager growing up in suburban Colorado, and faced -- as all teenagers are -- with difficult choices and pressures. It is only now, when the world knows Cassie Bernall as one of the Columbine High students killed by two rampaging schoolmates, that the choices she made offer a profound relevance for us all. Once a rage-filled young woman who walked a path similar to that of her killers, Cassie found a way out of her personal snares and, through her faith and a family's love, chose to embrace life with courage and conviction.^Told with unflinching honesty by her mother, Misty Bernall, Cassie's story is "a profoundly human story that should be read by every paren
-Publisher

from Chapter 7 -- Dying We Live Within a day of the shooting at Columbine High, the story of Cassie's exchange with the boys who killed her was making headlines across the nation, and by the next day, people began calling her the "martyr of Littleton." At first I wasn't too sure what to make of it. Cassie is my daughter, I thought. You can't turn her into a Joan of Arc. I'm not belittling her bravery. I'm profoundly proud of her for refusing to cave in, and for saying yes to her killers, and I always will be. She had principles and morals, and she was not ashamed of them, even though it must have taken all the courage she could muster to hold fast. When I first heard what she had done, I looked at Brad, and I wondered, "Would I have done that?" I might have begged for my life. Cassie didn't. She may have been seventeen, but she's a far stronger woman than I'll ever be. Still, she would hate to be held up as a shining example or singled out for praise. In any case, she was not the only one to pay for taking a stand that day at the high school...In one classroom, a teacher pulled out light bulbs to darken the room and trick the shooters into thinking it was empty. One boy threw himself on top of his sister to protect her from the gunfire and take the bullets himself. Another grabbed a bomb and tossed it clear of a group of fellow students, even though he was wounded. Dave Sanders, a teacher, stood in a hallway as the gunmen approached, blocking oncoming students and urging them to run the other way to safety. Minutes later he was shot, and by the time a rescue squad got to him, he had bled to death. To lift up Cassie as a martyr, then, is unnecessary. It won't change the facts of her life. For Brad and me it is enough to know that, whatever the reason, Cassie stood up for what she believed. It is enough to know that at an age when image means everything, she was not ashamed to make a stand or afraid to say what she thought. Copyright copy; 1999 by Misty Bernall
-Publisher

Misty Bernall is a financial analyst for Lockheed Martin and lives in Littleton, Colorado, with her husband Brad, their son Chris, and two German Shepherds, Heidi and Reese. It was at Littleton's Columbine High School that her daughter Cassie was murdered in one of the most horrific massacres in recent memory.