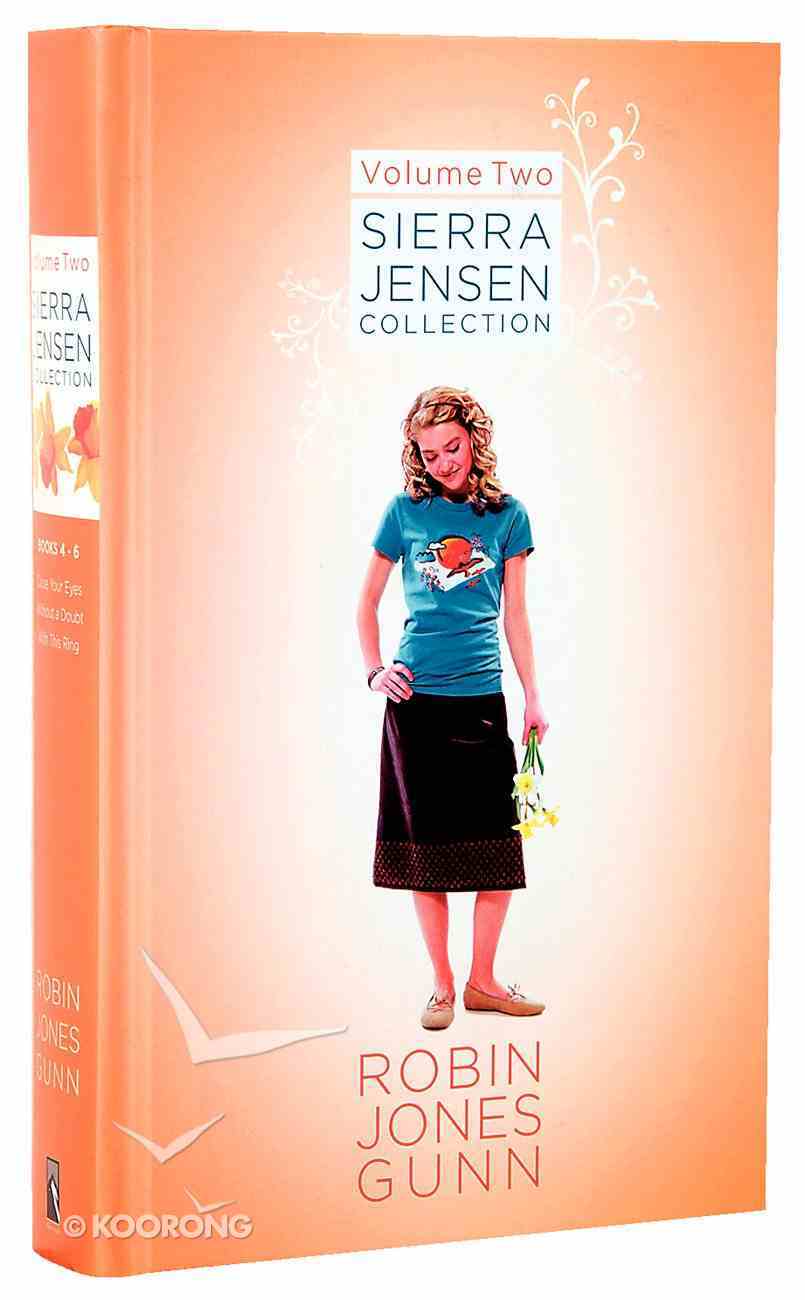 Volume Two: Paul’s voice lives in her memory, but now it’s loud, clear, and right behind her in Close Your Eyes . With summer fast approaching, it is Without a Doubt bound to be Sierra’s best yet. In With This Ring, she can’t help but ponder the meaning of first kisses and lifetime commitments.

Sierra Jensen has prayed and prayed for the unattainable Paul, but no answers have arrived yet. She hopes a visit with her classmates to a homeless shelter will take her mind off Paul, but guess what? He’s working there! Finally they talk, and before Sierra knows it, Paul agrees to come over for dinner. Their evening together is perfect—until Randy shows up on Sierra’s doorstep! Can things get any more confusing?

What could be more fun than a backpacking expedition? Sierra can’t wait to go, especially since things in her life have gotten so…complicated. Paul has moved to Scotland, and Randy is moving into Sierra’s heart. But just when things start to make sense, Sierra is asked out by Drake—the gorgeous guy her best friend, Amy, likes. How can Sierra even think about Drake when she knows doing so will hurt Amy and Randy? When a freak snowstorm hits, Sierra suddenly realizes what really matters most—but is it too late?

Sierra is on her way to Southern California for the very best reason of all: a wedding! Tracy and Doug’s long-awaited I dos are about to happen, and Sierra is eager to join Christy Miller and the rest of their friends. As soon as she arrives, Sierra discovers that everyone seems to be in love—except for her. That’s okay…she has what she needs—a gold purity ring from her dad and a vow of her own: to save herself for marriage. But when Sierra returns home, she wonders if her best friend, Amy, has settled for less than God’s best. Can Sierra convince her that purity is worth celebrating?

“After writing the twelve-book Christy Miller series for teens, a new character showed up on the pages of the final novel. Her name was Sierra Jensen, and she was so compelling as a teenage character that readers began asking for a series about Sierra in order to hear more about her life choices. Our family had just moved to Portland at the time, and I found it easy to picture a sixteen-year-old like Sierra shopping at the local vintage clothing stores, hanging out with friends at a garage band concert, and serving at the homeless shelter on weekends.”

“HOW COME THIS STUFF makes sense to you?” Randy Jenkins asked, tossing his wadded-up gum wrapper into the fireplace. A high school physics book lay propped like a tent on the floor in front of him, and a half dozen papers surrounded him.

Sierra pushed the painted enamel bracelet up her arm and cast her buddy an encouraging smile. “You almost have it,” she said. “Give it one more try.”

While Randy fussed over his homework, Sierra stretched out her legs and fondly gazed around the warm family room. The grand Victorian house, which had been in her family for more than fifty years, offered plenty of space.

Sierra tilted her head and tried to catch Randy’s gaze with her gray-blue eyes. “You want to take a break and eat something?”

Before Randy could answer, Sierra’s older sister, Tawni, burst into the room clutching the phone in her drooping hand. “Where’s Mom?”

“She took the boys to get haircuts.” Sierra noticed tears glistening in Tawni’s eyes. If Sierra guessed right, Tawni had been talking to her new boyfriend, Jeremy Mackenzie, as she usually did this time of day, every day. Conversations with Jeremy were prone to cause smiles and whispers, not tears.

“Are you okay?” Sierra asked cautiously. She and her sister had never been exceptionally close and such a question could embarrass Tawni, especially since Randy was
there.

“Sure. Fine. I’m going to make cookies,” Tawni announced and marched through the family room into the kitchen.

“Now I know she’s upset,” Sierra said in a low voice to Randy.

He was scratching a list of figures on a piece of notebook paper and didn’t look up.

“Something happened between her and Jeremy. I bet he’s not coming.”

“What?” Randy said, looking up. His straight, dark blond hair, which was cut in what Sierra’s Granna Mae called a “Dutch boy,” fell into his eyes. “Were you talking to me?”

“Never mind,” Sierra said. Gathering her long gauze skirt in her hand, she stood up and headed for the kitchen. “I’ll be right back.”

The counter was already covered with all the dry-goods canisters from the pantry, including one filled with pasta. Two eggs sat precariously close to the edge of the counter, and a large bottle of vanilla extract stood with its lid off, spreading its pleasant fragrance like a blessing over the baking event. Tawni was smearing butter on two cookie sheets as Sierra entered. Her sister didn’t look up but dumped the rest of the butter stick into a mixing bowl and furiously began to chop at it with a wooden spoon.

“Are you all right?” Sierra asked again.

“Of course I am! Just because Jeremy isn’t coming to see me this weekend after all our planning doesn’t mean my life should come to a standstill. I have lots to do. Lots and lots!”

Sierra lowered herself onto a kitchen stool and felt her heart sinking. During the weeks Tawni and Jeremy had been planning his visit from San Diego, Sierra had been busy secretly making her own wishes. Jeremy had a brother, Paul, whom Sierra happened to meet at the airport in London five months ago. Since then she had seen him around town twice and received two letters from him. Their brief conversations and correspondence had left Sierra with a treasure chest full of “what if’s” buried deep inside her heart.

When she had found out Paul and Jeremy were brothers, it seemed inevitable her path would cross with Paul’s. Then when Jeremy decided to come to Portland to see Tawni, Sierra had known her treasure chest was about to be opened. But now all those possibilities were crushed.

“So, is he going to come later? After school is out?”

“He’s going to try.” Tawni opened the cupboard door and began to move the spices around. “Where does Mom hide the chocolate chips?”

“In the pantry,” Sierra said. “On the top shelf behind the paper towels.”

Tawni went to the pantry and continued her search as Sierra tried to rearrange the dreams in her treasure chest. “That’s not so bad,” she told Tawni (and herself). “Only a few more weeks. Besides, in June, Jeremy should be able to stay longer. This weekend would have been here and gone like that.” Sierra snapped her fingers for emphasis. “Don’t you think it will be much better if he comes for a whole week?”

“I guess. That is, of course, if he can pull together the money by then. His car needs new brakes, and his bank account is shot.”

“What is that supposed to mean?” Tawni spun around with a roll of paper towels in her hand.

Sierra should have known better than to challenge Tawni when she was in such a mood–especially because, at eighteen, Tawni didn’t put much value in Sierra’s sixteenyear-old logic. But she spoke up anyway.

“You guys talk constantly on the phone. I’m sure it adds up. Neither of you has that much money. It doesn’t make sense to me. Why don’t you save some money by not calling each other all the time?”

Surprised by Sierra’s admission, Tawni didn’t respond but continued her search for the chocolate chips.

“I guess love makes you do crazy thing,” Sierra said. “Like spending all your money on a phone bill instead of a plane ticket.”

Tawni pursed her lips together as if she were holding back a flood of words.

“It was only a suggestion,” Sierra mumbled, holding up her arms in surrender.

You’re not the only one affected by this, Tawni, she thought. All my dreams of seeing Paul are dissolved now, too, you know. Of course, Sierra would never admit that to her sister. A stiff silence crowded the large kitchen as Tawni reached her arm into the dark recesses of the cupboard
above the refrigerator. “Aha! Perfect!” She extracted a large, crumpled bag of M&M’s.

“Those look like they’ve been there for a decade,” Sierra said.

“So? The bag is still closed. Don’t they put enough preservatives in these to keep them fresh into the next century?” Tawni pulled open the bag with a snap and poured the candy onto the counter. “Go ahead. Try one,” she challenged. “I’m not going to try one,” Sierra said. “You try one.” It occurred to Sierra that she and her sister had somehow changed roles. All their lives, Sierra had been the daring, rambunctious one even though she was younger. When they were little, Tawni was the dainty, prissy one who insisted on using a straw to drink her milk lest she fall prey to the dreaded milk mustache.

Now Tawni was acting like Sierra by turning the kitchen into a war zone in her attempt to make cookies, and Sierra had turned into Miss Finicky. Funny how she would go against her true nature just to oppose her sister. “Oh, this is crazy,” Sierra spouted, grabbing a handful
of M&M’s. “Look, I’m eating them.” She tossed them into her mouth just as Randy entered the kitchen.

“I am not,” Sierra said, her words coming out garbled through the M&M’s.

It wasn’t unusual for Randy to hear this kind of banter, which frequently flew between Sierra and Tawni. About three weeks ago, he had started to stop by Sierra’s house regularly. At first it was on Friday nights, and any other night he wasn’t working at his lawn-care business. He even came by one night and had dinner with Sierra’s family when Sierra was at her friend Amy Degrassi’s house. Sierra’s parents encouraged “drop-by” friendships, so Randy had
quickly become part of the family.

“I have only one question,” Randy said, sitting next to Sierra and nudging the two eggs away from the edge of the counter. “When will they be ready?”

“Soon,” Tawni said, measuring the sugar and doublechecking to make sure it was exactly right.

“Let us know when you’re ready for taste testers,” Randy said, heading back to the family room. “I have to finish this homework tonight.”

“Me too,” Sierra said. She gave Tawni a pleasant look and added, “Just keep telling yourself it will only be a few more weeks before he comes.”

Tawni looked surprised and tossed back an amiable, “Yeah, well, thanks for caring.”