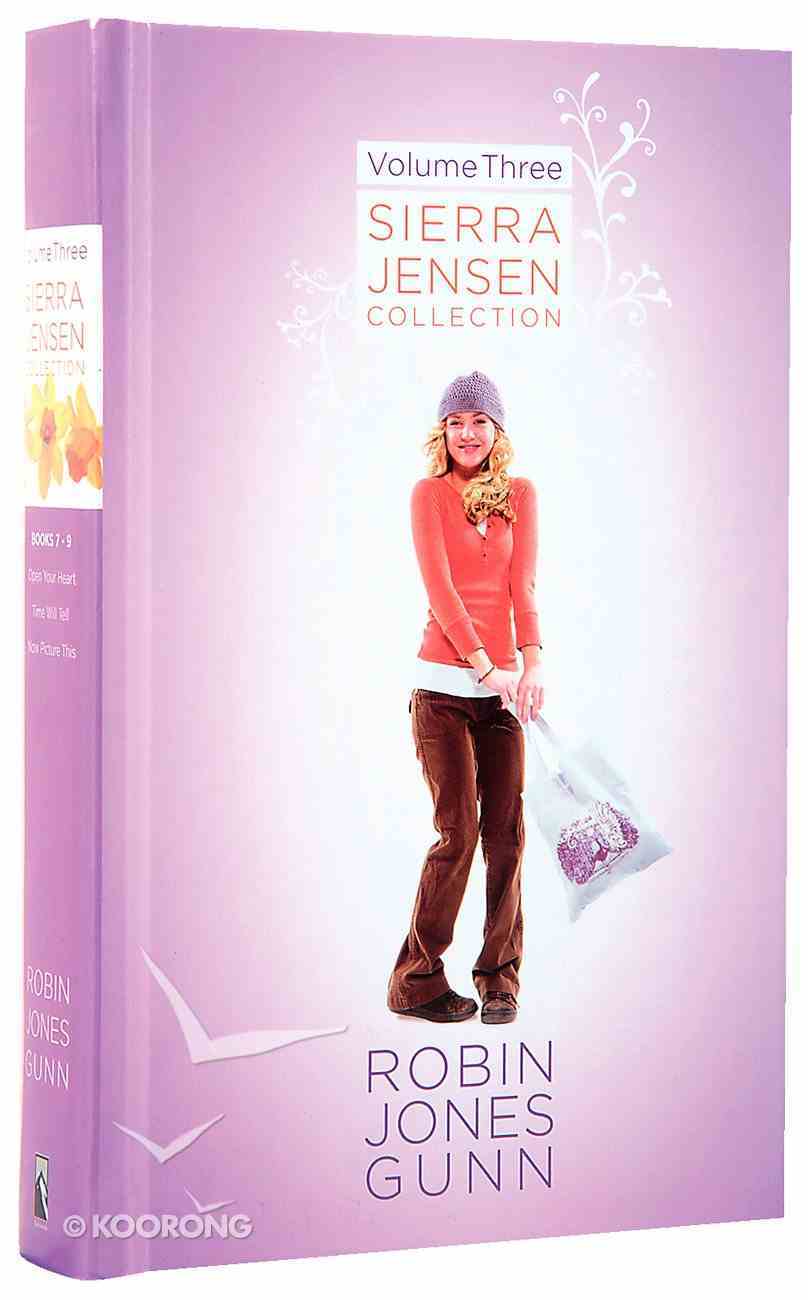 On My Own (#04 in Diary Of A Teenage Girl: Caitlin Series)
Melody Carlson
Paperback

Happenstance...or God's Great Plan? ^She's the bold, free-spirited type. She's cute, she's fun, and she's following God. She's Sierra Jensen, Christy Miller's good friend, ready for her junior year of high school All twelve books in the popular Sierra Jensen series come together in four volumes to reveal the ups and downs of Sierra's incredible God-led journey ^ Volume Three: An exciting trip to Europe challenges Sierra to "Open Your Heart "to loving others without expectations. At the start of her senior year, only "Time Will Tell" the truth about Sierra's friendships. And in "Now Picture This," she wonders if her relationship with Paul is as picture perfect as she thinks ^Christy Miller knows a good friend when she meets her, ^and so will you--Sierra Jensen is at it again ^"Open Your Heart" ^What an adventure Having Christy Miller invite Sierra on an all-expenses-paid trip to Europe was amazing--but that was just the beginning. Sierra never imagined she'd meet some
-Publisher


SIERRA’S HEART POUNDED. Her pulse hammered in her ears. Gripping the armrests of her seat, she tried to scream, but no sound emerged.

We’re going to crash! This airplane is about to nose-dive into the freezing Atlantic Ocean! We’re doomed!

Instead of Sierra’s whole life passing before her eyes, only the events of the past few days flashed through her mind. She saw herself at Doug and Tracy’s wedding in Southern California. Her sister, Tawni, was catching the bouquet. Her good friend Christy was standing beside Aunt Marti, and all of a sudden they were inviting Sierra to go with the two of them to Switzerland.

Then Sierra saw herself in California, prompting her parents over the phone as they searched her messy room in Portland to find her passport. “Try looking on my desk,” she urged them. “Or maybe it’s in the bottom dresser drawer.”

These suggestions drifted from Sierra as she watched herself boarding a plane early that morning with her passport in hand.

Now, here she was, spiraling into the icy blue. Sierra screamed inside her mind. From far away, a familiar voice called, “Sierra, are you okay?”

She felt a soft touch on her right arm. The voice seemed to come closer. Sierra’s eyes fluttered open, and she gasped for breath.

“We’re getting ready to land,” Christy said from the seat beside Sierra. “Are you okay? You were talking in your sleep.”

Sierra blinked at Christy and took in her surroundings. Looking out the window, she could see the bright blue sky. The plane was confident and steady. In the seats beside Sierra, Christy and Marti were calmly preparing for the landing.

“That was an awful nightmare!” Sierra moistened her lips and caught her breath. “I thought we were going to crash.” She tried to act as if the idea was funny, but the terror of the dream still loomed over her. The details were too close to reality.

Sierra was actually on a plane headed for Germany. From there, she, Christy, and Marti would take a train into Switzerland. It really had been only a few frenzied days since Sierra had attended Doug and Tracy’s wedding in Newport Beach. After the wedding, Sierra had been invited to travel with Christy and Marti at the last minute. Only one part of Sierra’s dream wasn’t true–the plane showed no signs of spiraling into the Atlantic.

“Do you want a washcloth?” Christy asked. “I took one for you when they came by a little earlier. It’s probably cold now.”

Sierra opened the cooled cloth and held it over her face, breathing in the faint citrus fragrance. Lifting her long, curly blond hair, she held the washcloth against the back of her neck and looked down at her loose jeans. The mustard stain above her right knee was still there in the shape of an ivy leaf, left over from a deli sandwich she had eaten somewhere above Nova Scotia. When Sierra had tried to open a mustard packet with her teeth, a flying blob had landed on her leg. She rubbed at the stain with the washcloth. It didn’t help. The spot would probably be with her for the rest of the trip.

Because Sierra, Christy, and Aunt Marti had left for Europe from Marti’s house in Southern California, Sierra hadn’t gone home to Portland to pack the right kind of clothes for Switzerland in August. She also hadn’t been able to help her frantic parents when they couldn’t find her passport. Fortunately, her brother Gavin had located it behind the dresser, and Mr. and Mrs. Jensen had sent it to Sierra through an overnight delivery service. Now Sierra wished she would have had them send a few more things, like a second pair of jeans.

All the planning happened so fast. Sierra’s parents had been supportive when she called them and explained the invitation to join Christy and Aunt Marti. The Jensens were flexible, and since Sierra was the fourth of six children, they tended to be fairly relaxed about her adventures. But this time, even Sierra wasn’t sure what she had gotten herself into.

Christy pulled her shoulder-length nutmeg hair up in a ponytail holder and crossed her long, slender legs. Sierra noticed that Christy also looked a little uneasy. Maybe she was stiff from sitting on the plane for twelve hours. Or maybe Aunt Marti was getting under Christy’s skin the way Marti had already irritated Sierra.

“What time will it be when we land?” Sierra asked,
adjusting her seat belt.

“Eight twenty-seven,” answered Marti. “Remember, it’s morning here. We’ll only have an hour to make it through customs, retrieve our luggage, and catch our train to Basel.
We need to be quick about this.”

Marti meant business–all the time. Sierra wasn’t exactly fond of this petite, polished, and pushy woman. Marti had helped Sierra’s sister, Tawni, find a modeling job in Southern California, which made Sierra’s parents feel more comfortable about Sierra’s accepting this last minute ticket to Europe. From anyone else, such an extravagance might be unusual, but with Aunt Marti, money was only a method to accomplish her goals. And right now, it was Marti’s goal to get Christy to Switzerland so she could check out a college where she had been offered a scholarship.

“Here,” Marti said, opening her leather purse and handing Sierra and Christy a pack of gum. “Start to clear your ears now. We’re beginning to descend.”

Irritation showed on Marti’s perfectly made-up face. Not a hair was out of place, and her knit pantsuit didn’t show one wrinkle. How did she manage to look so good after this long flight?

Christy’s clear blue-green eyes shot a message to Sierra
to take the gum and hush up about it.

She stuck half a stick of the wintergreen-flavored gum into her mouth and pondered the mystery of why she had been invited on this trip. All Sierra could explain to her parents was that Marti had three ticket vouchers. The third was supposed to be for Christy’s boyfriend, Todd, but he couldn’t take the time off work to come. Christy’s best friend, Katie, had broken her foot only a few days before. Marti hadn’t even mentioned bringing her husband, Bob, which Sierra thought was strange. And Christy said her mom turned down the opportunity because she didn’t know how she would handle such a long flight. That left Sierra. She didn’t mind being last choice, though. She was excited about the chance to do some more traveling.

“Do you feel rested at all?” Christy asked.

“I slept for about two hours, I think. Remember how hard it was to get over jet lag when we went to England last January?”

“I remember,” Sierra said. “They say it’s better if you stay awake the whole first day so you’ll be able to sleep that night.”

“That’s exactly what we’re going to do,” Marti said, her dark eyes checking Sierra’s and Christy’s seat belts to make sure they were fastened. “We’ll take a train directly from the
airport to Basel. After we check into the hotel, I’ve made an appointment for us to meet with the director of the school at two-thirty this afternoon.” She chewed her piece of gum
demurely.

“That doesn’t give us much time,” Christy said. “I mean, for any goof-ups.”

Marti gave her a long, raised-eyebrow stare. “We aren’t planning on having any ‘goof-ups.’ And do chew your gum with your lips together, dear.”

“–and I haven’t?” Marti questioned.

“I didn’t hear lunch mentioned in the schedule,” Sierra jumped in, hoping to lighten the tone. “When do we eat?”

“We’ll eat on the train,” Marti said firmly. “At least we’re in first class this time.”

Sierra knew Marti was still miffed that their airplane seats hadn’t been first class as she had expected. Marti had angrily confronted the clerk at the check-in desk, but the best the airline could do was guarantee Marti first-class seats on the way home.

“It looks as if it’s going to be a nice, clear day,” Christy said, nodding at the buildings, the highways, and fields rapidly becoming visible out their window. “It all seems socharming from up here. Really clean and quaint.”

“You don’t think it’s really like that?” Sierra asked. She noticed the runway coming into view.

Just as Christy finished her sentence, the plane’s tires bumped gently onto the runway, and the giant aircraft slowed. Sierra gripped her armrests and clenched her teeth,
waiting for the plane to stop. We didn’t crash, she thought. We’re here! It was only a dumb nightmare I probably got from rushing around to get ready for the trip. Or maybe from the pickles on that deli sandwich.

Sierra and Christy exchanged glances as they undid their seat belts and reached for their packs under the seats in front of them. Sierra couldn’t help but wonder if Christy was having the same thought she was: A week with Marti might be harder than they realized.