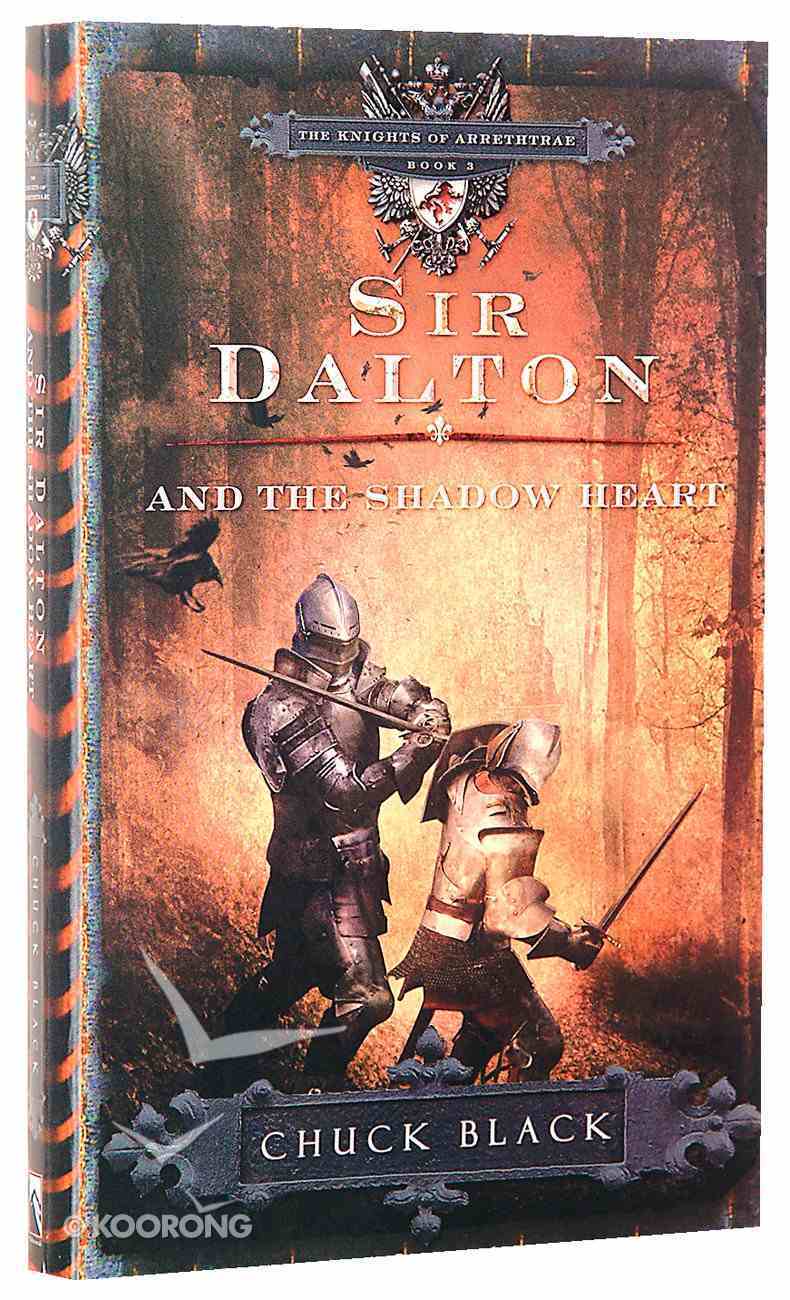 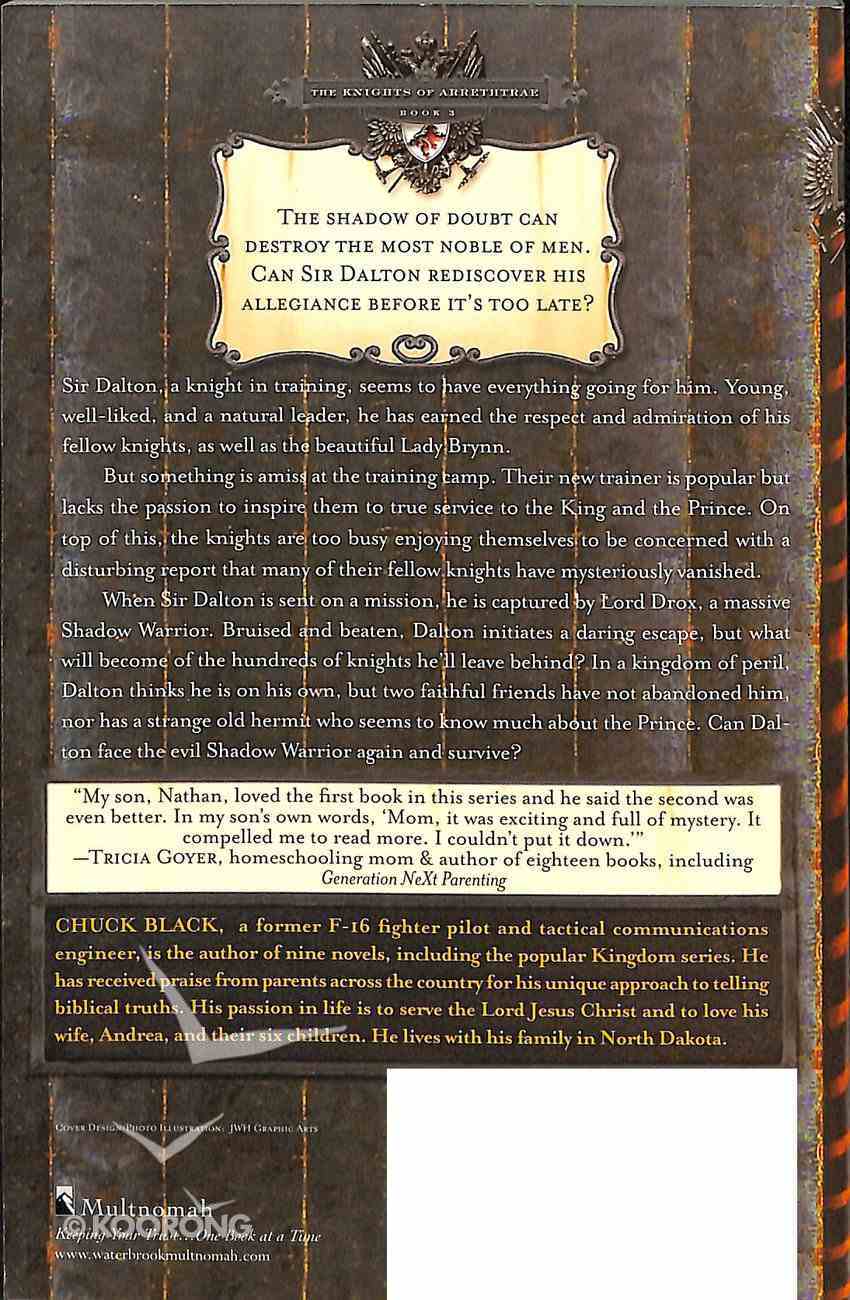 Sir Dalton, a knight in training, seems to have everything going for him. Young, well-liked, and a natural leader, he has earned the respect and admiration of his fellow knights, and especially the beautiful Lady Brynn. But something is...

Sir Dalton, a knight in training, seems to have everything going for him. Young, well-liked, and a natural leader, he has earned the respect and admiration of his fellow knights, and especially the beautiful Lady Brynn.

But something is amiss at the training camp. Their new trainer is popular but lacks the passion to inspire them to true service to the King and the Prince. Besides this, the knights are too busy enjoying a season of good times to be concerned with a disturbing report that many of their fellow Knights have mysteriously vanished.

When Sir Dalton is sent on a mission, he encounters strange attacks, especially when he is alone. As his commitment wanes, the attacks grow in intensity until he is captured by Lord Drox, a massive Shadow Warrior. Bruised and beaten, Dalton refuses to submit to evil and initiates a daring escape with only one of two outcomes–life or death. But what will become of the hundreds of knights he’ll leave behind? In a kingdom of peril, Dalton thinks he is on his own, but two faithful friends have not abandoned him, and neither has a strange old hermit who seems to know much about the Prince. But can Dalton face the evil Shadow Warrior again and survive?
-Publisher

Some tales tell of gallant deeds done by men and women of might. Some tell of great battles fought to free the innocent from the tyranny of wicked men. But some tales tell of the journey of the heart, and such a one is this.


I am Cedric of Chessington, Knight of the Prince. I have taken upon myself the duty of chronicling the stories of many of my fellow knights… those living now and those who came before. Please do not think me over bold if I should implore you to pause in your own life’s journey and sit with me these few moments. I have learned that pondering the life of another oft reveals both strengths and weaknesses in my own devotion to the King and his great Son. Such ponderings can beckon hearts to a nobler call and thus are worth every moment spent upon them.


Sir Dalton discovered an enemy lurking in the shadows of his heart—an enemy we must all face at some point. The Prince called one of his mightiest knights “greatest among all,” and yet he too faced this enemy. Therefore judge not Sir Dalton, but glean from his tale the wisdom and the courage to let the light of the Prince so illumine your whole being until your heart holds no shadows at all.


Sir Dalton dared to look into the shadow of his heart…Shall we?


Dalton dared not close his eyes, but he wanted to. He thought that perhaps if he closed them long enough he
would awaken from this nightmare. His heart quickened, and his palms began to sweat. He tried to swallow, but his throat was so tight that the motion of his tongue stopped at the roof of his mouth and would not allow it.


“You fool!” The condescending words came from a dark, evil voice. “Did you really think you could escape me?”


Dalton stood before a true monster of a warrior. Lord Drox was a tower of muscle clad in black chain mail and gleaming black armor. He wung his gruesome blade from side to side as if to taunt Dalton. The warrior stood over seven-and-a-half feet tall, but to Dalton he seemed twice his own height. Dalton was facing a giant of evil and there was nowhere to run.


Dalton quickly loosened the dressing that bound his wounded left arm to his side. He gripped his sword tightly as Lord Drox swung his blade in an arced slice. The swords collided, and Dalton nearly lost his grip. Stunned by the power of Drox’s cut, he fought the paralyzing fear that rose up within him.

Surely this will be the end of me.


He gripped his sword tighter and made a diagonal cut toward the hulking form in front of him, but Drox’s blade easily met his blow. Dalton’s sword vibrated as though he had struck a brick wall instead of an opposing sword.
Dalton recovered his position once more and held his sword before him. Drox actually lowered his sword and began to laugh. The warrior’s deep chortles reverberated off the granite walls of the box-canyon arena where they fought. The canyon’s walls rose high around them, and though Dalton had searched for an exit, he had found none.He thought of ducking into the trees or maneuvering behind some of the jagged granite outcroppings
nearby, but such moves would be futile. There was no place to run.


Drox finished enjoying his moment of mirth and fixed Dalton with a look of leering hatred.


“Oh how I love to kill the incompetent Knights of the Prince!” He raised his sword and attacked again.


Dalton tried to stand firm and brought his sword to meet the first few cuts, but he quickly found himself in retreat. Drox’s blade seemed to pound into Dalton’s blade like the blows of a war hammer, and he could not sustain his defense. Drox brought a powerful two-handed horizontal cut from Dalton’s right side.


Dalton gripped his own sword with both hands, hoping to withstand the impact, but the force of Drox’s weapon sheared Dalton’s sword in two and sent him stumbling backward. He flailed for a handhold to keep from falling, but there was nothing to grasp. Time seemed to slow as he fell to the ground and watched the upper portion of his blade fly end over end away from him. It landed in the dirt of the box-canyon floor just as his back hit the ground with a thud.


Dalton closed his eyes and hoped against reality that he would awaken from this nightmare.He saw the dark shadow over him through his closed eyelids and opened his eyes to see the evil form of Drox looming over him.


“Now you know who is truly lord of your life, knave. It is he who has the power to kill you.” Drox’s face twisted with utter loathing as he raised the hilt of his sword high above his head, the tip pointing downward
toward Dalton.With both hands, Drox plunged the blade through Dalton’s armored abdomen and deep into the ground beneath.


Dalton screamed against the steely invasion of his body as the fear of his imminent death fully gripped him. He released his grip on the worthless hilt of his broken sword and grasped the blade of Drox’s weapon, convulsing in unbearable pain.


He wondered briefly why Drox had not pierced his heart instead. Then he understood. This warrior was so vile that he would draw even greater pleasure from executing a slow, painful death rather than a quick one.


Drox loosed his grip on the sword and knelt down beside Dalton. He looked into Dalton’s eyes, clearly enjoying the fear, pain, and hopelessness he saw in them. His thin lips twisted into an evil grin.


“My pets prefer their meat fresh.” Drox lifted his hand into the air, and a large raven with two wings on each side of its body landed on his wrist.


Caw! The eerie bird screeched as it looked down at Dalton with impenetrable black eyes.


“When you are too weak to fight them off, they will come,” Drox said as he stood. “Knight of the Prince”—Drox spat—“He never cared about you, fool! You’re just a dispensable pawn.” He turned and walked
away.


Pain saturated Dalton’s body.The slightest movement amplified the agony tenfold.The sky above him filled with twenty hungry ravens, each one calling for others to join in the final torture. One of the birds landed on the handle of Drox’s sword, and the movement from its landing nearly sent Dalton into unconsciousness.


He screamed at the double-winged bird, but it showed no fear. Its feathers were sleek and glistening, its eyes as dark and evil as its master’s.


Dalton knew he had but one faint chance—to lift the sword from the ground through his stomach and free himself. He grasped the blade tightly with both hands and took as deep a breath as he could, then pushed up against the embedded steel with all of his remaining strength.


The avalanche of pain crushed him into a semiconscious state, where his mind wallowed between the worlds of reality, memory, and dreams.The vision of a beautiful young woman filled his mind as he was taken back two years earlier.


“Lady Brynn…,” he whispered, and reached to touch her…but she was not there.