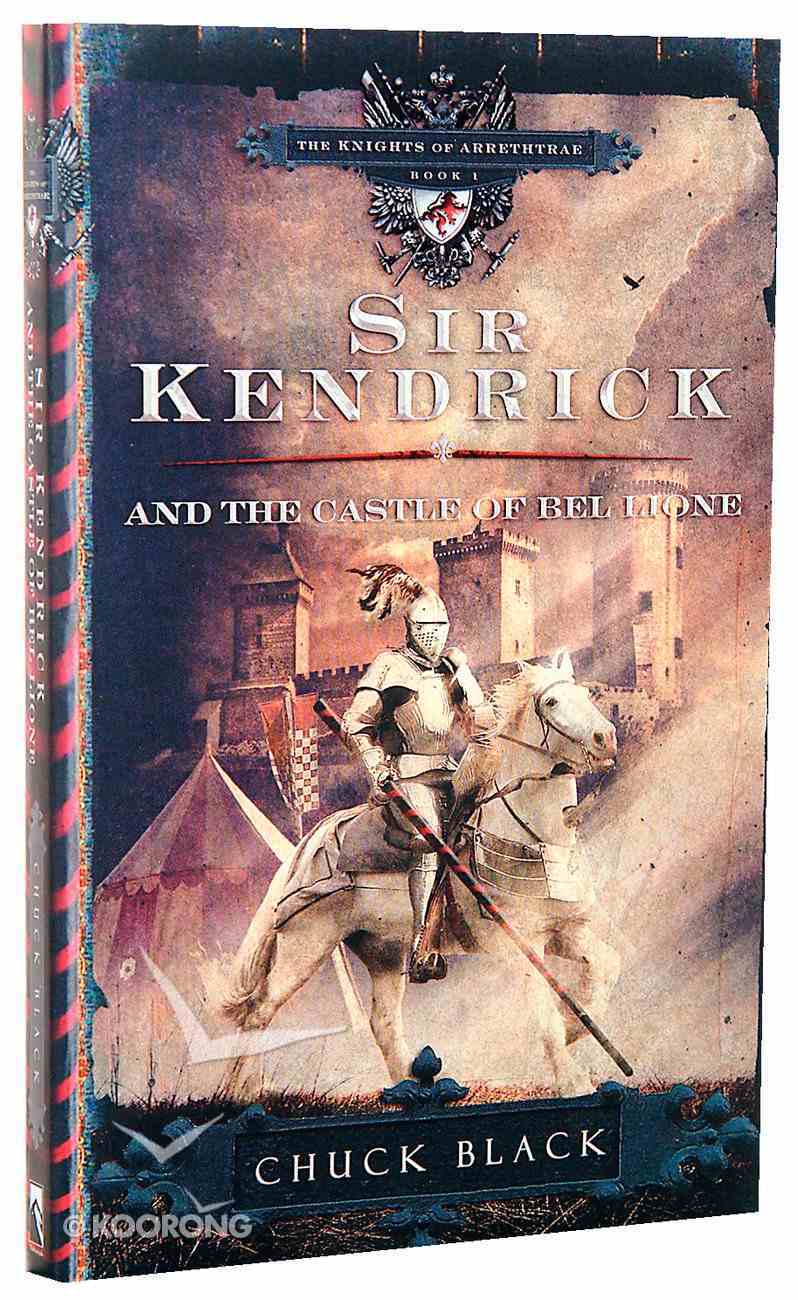 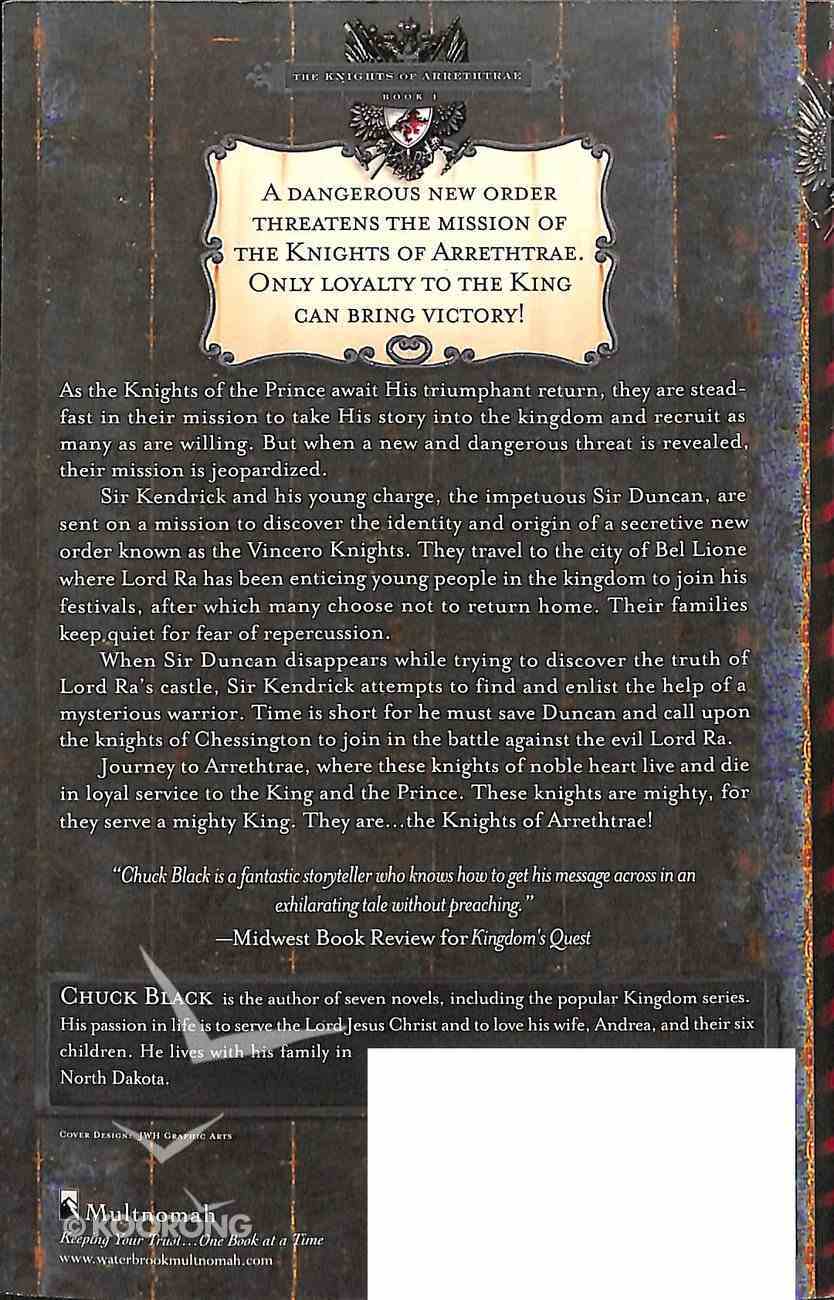 A dangerous new order threatens the mission of the Knights of Arrethtrae. Only loyalty to the King can bring victory. As the Knights of the Prince await His triumphant return, they are steadfast in their mission to take His story...

A dangerous new order threatens the mission of the Knights of Arrethtrae. Only loyalty to the King can bring victory. As the Knights of the Prince await His triumphant return, they are steadfast in their mission to take His story into the kingdom and recruit as many as are willing. But when a new and dangerous threat is revealed, their mission is jeopardized. Sir Kendrick and his young charge, the impetuous Sir Duncan, are sent on a mission to discover the identity and origin of a secretive new order known as the Conquistero Knights. They travel to the city of Bel Lione where Lord Ra has been enticing young people in the kingdom to join his festivals, after which many choose not to return home. Their families keep quiet for fear of repercussion. When Sir Duncan disappears while trying to discover the truth of Lord Ra's castle, Sir Kendrick attempts to find and enlist the help of a mysterious warrior. Time is short for he must save Duncan and call upon the knights of Chessin.

Kingdom’s Heart
An Introduction to the Knights of Arrethtrae

Like raindrops on a still summer’s eve, the words of a story can oft fall grayly upon the ears of a disinterested soul. I am Cedric of Chessington, humble servant of the Prince, and should my inadequate telling of the tales of these brave knights e’er sound as such, know that it is I who have failed and not the gallant hearts of those of whom I write, for their journeys into darkened lands to save the lives of hopeless people deserve a legacy I could never aspire to pen with appropriate skill.

These men and women of princely mettle risked their very lives and endured the pounding of countless battles to deliver the message of hope and life to the far reaches of the kingdom of Arrethtrae…even to those regions over which Lucius, the Dark Knight, had gained complete dominion through the strongholds of his Shadow Warriors.

What is this hope they bring? To tell it requires another story, much of it chronicled upon previous parchments, yet worthy of much retelling. Listen then, to the tale of a great King who ruled the Kingdom Across the Sea, along with His Son and their gallant and mighty force of Silent Warriors.

A ruler of great power, justice, and mercy, this King sought to establish His rule in the land of Arrethtrae. To this end He chose a pure young man named Peyton and his wife, Dinan, to govern the land. All was well in Arrethtrae until the rebellion…for there came a time when the King’s first and most powerful Silent Warrior, Lucius by name, drew a third of the warriors with him in an attempt to overthrow the Kingdom Across the Sea.

A great battle raged in the kingdom until finally the King’s forces prevailed. Cast out of the kingdom…and consumed with hatred and revenge…Lucius, known also as the Dark Knight now brought his rebellion to the land of Arrethtrae, overthrowing Peyton and Dinan and bringing great turmoil to the land.

But the King did not forget His people in Arrethtrae. He established the order of the Noble Knights to protect them until the day they would be delivered from the clutches of the Dark Knight. The great city of
Chessington served as a tower of promise and hope in the darkened lands of Arrethtrae.

For many years and through great adversity, the Noble Knights persevered, waiting for the King’s promised Deliverer. Even the noblest of hearts can be corrupted, however, and long waiting can dim the brightest hope. Thus, through the years, the Noble Knights grew selfish and greedy. Worse, they forgot the very nature of their charge.

For when the King sent His only Son, the Prince, to prepare His people for battle against Lucius—the Noble Knights knew Him not, nor did they heed His call to arms. When He condemned their selfish ways, they mocked and disregarded Him. When He began to train a force of commoners—for He was a true master of the sword—they plotted against Him.

Then the Noble Knights, claiming to act in the great King’s name, captured and killed His very own Son. What a dark day that was! Lucius and his evil minions—Shadow Warriors—reveled in this apparent victory.

But all was not lost. For when the hope of the kingdom seemed to vanish and the hearts of the humble despaired, the King used the power of the Life Spice to raise His Son from the dead.

This is a mysterious tale, indeed, but a true one. For the Prince was seen by many before He returned to His Father across the Great Sea. And to those who loved and followed Him—myself among them—He left a promise and a charge.

Here then is the promise: the Prince will come again to take all who believe in Him home to the Kingdom Across the Sea. And this is the charge: those who love Him must travel to the far reaches of the kingdom of Arrethtrae, tell all people of Him and His imminent return, and wage war against Lucius and his Shadow Warriors.

Thus we wait in expectation. And while we wait, we fight against evil and battle to save the souls of many from darkness. We are the knights who live and die in loyal service to the King and the Prince. Though not perfect in our call to royal duty, we know the power of the Prince resonates in our swords, and the rubble of a thousand strongholds testifies to our strength of heart and soul.

There are many warriors in this land of Arrethtrae, many knights who serve many masters. But the knights of which I write are my brethren, the Knights of the Prince. They are mighty because they serve a mighty King and His Son. They are…the Knights of Arrethtrae!