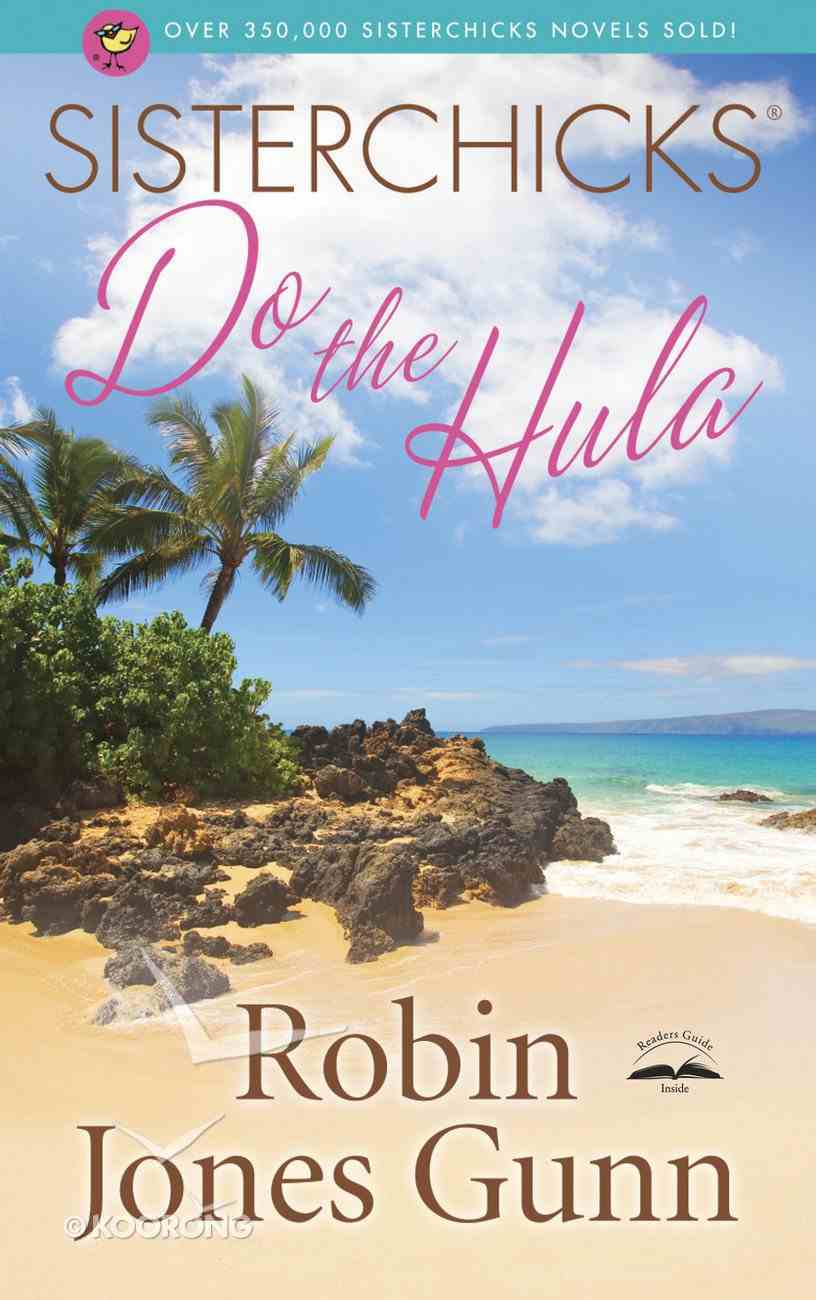 Some dreams take a while before they come true. Best friends Hope and Laurie never made it to Hawaii during their college years. But when they're about to turn forty, the islands still beckon, and off they go - with...

Some dreams take a while before they come true. Best friends Hope and Laurie never made it to Hawaii during their college years. But when they're about to turn forty, the islands still beckon, and off they go - with an unexpected stowaway on board (Hope happens to be seven months pregnant). A little pineapple, a little sunshine, and a surprising little surfing lesson give these two sisterchicks all their crazy hearts could hope for - and more - as they enter the next season of their lives with a splash and with a beautiful vision of what God has dreamed up for them.
- Publisher.

Some dreams take a while before they come true. Best friends Hope and Laurie never made it to Hawaii during their college years. But when they're about to turn forty, the islands still beckon, and off they go - with an unexpected stowaway on board (Hope happens to be seven months pregnant). A little pineapple, a little sunshine, and a surprising little surfing lesson give these two sisterchicks all their crazy hearts could hope for - and more - as they enter the next season of their lives with a splash and with a beautiful vision of what God has dreamed up for them.

Wherever there’s chocolate, there’s sure to be a sisterchick celebrating, and this trip to Hawaii is no exception. Best friends Hope and Laurie are on an audacious mission to commemorate their fortieth birthdays in style. Surfing and sailing, sushi and snorkeling—these two macadamia nuts from the mainland sample it all, unhindered by a surprise little stowaway.

Sisterchick n.: a friend who shares the deepest wonders of your heart, loves you like a sister, and provides a reality check when you’re being a brat.

Luaus are only the beginning. The island experience binds Hope and Laurie’s souls together, gently restoring their unfinished dreams. Garlanded with leis or swimming with sea turtles, they join the dance of delight in their Maker, entering the next season of their lives filled with the unforced rhythm of grace.

We lived in Hawai’i when our son was in elementary school and have returned many times for visits. I have a deep and abiding love for all that is Hawaiian so of course the islands were my location of choice for this second Sisterchick novel. The art of hula is an intricate form of storytelling has gone through many changes over the years. Every woman’s life has a story. Every woman goes through many changes over the years. But not every woman has yet learned to "hula". This book will encourage her to "hula" through life as she learns to live out her story with the unforced rhythm of grace.
-Publisher

Laurie came up with the idea to go to Hawai&rsquo;i. Both times. The first time she made the suggestion was in 1983, when we were sophomores at UC Santa Barbara. I was up to my eyebrows in shattered bits of my heart when I burst into our dorm room to blurt out the news: My engagement was off. While I had been busy trying on bridal gowns and ordering invitations for the June 19 wedding, my fianc&eacute; was leaving work early to smooch with some seventeen-year-old cinnamon twist who worked at Taco Bell.

Laurie saw it coming, but to her everlasting credit, she didn&rsquo;t try to collect my heart&rsquo;s fragments and glue them back together. Instead, she administered a steady supply of tissues for my big, globby tears and listened patiently until I had no more words to spit at her.

I said something about how the only thing that would make me better would be some serious chocolate. So we proceeded to the vending machine at the end of our hall and ceremoniously inserted our precious laundry quarters until all the Oreos and Reese&rsquo;s Pieces were ours. Returning to the room, we ate every last dot and crumb while sitting cross-legged on Laurie&rsquo;s sheepskin rug.

&ldquo;Because you need a fresh start. A new dream. Something wonderful to look forward to. Where should we go?&rdquo;

The only place I wanted to go was a dark cave where I could hibernate for six months.

&ldquo;I have an idea.&rdquo; Laurie rose to her feet. She fluttered her arms about to the right and then the left while awkwardly swishing her hips. &ldquo;What do you think?&rdquo;

&ldquo;Exactly! I do need hula lessons. And so do you. That&rsquo;s why we should go to Hawai&rsquo;i. On June 19. Just the two of us.&rdquo;

I let the word Hawai&rsquo;i plant itself in my ravaged soul like a lone tiki torch flickering in the midst of all the smoke and ashes. Hawai&rsquo;i.

All we needed was some money.

Laurie and I spent spring break in Napa Valley working at the restaurant Laurie&rsquo;s parents owned. We hoped for many generous tippers, but it turned out there was only one. Gabriel Giordani.

Before my eyes, Laurie fell in love with this struggling artist who came to the caf&eacute; every day with his two daughters. His wife had passed away a few years earlier, and all the locals loved to gossip about Gabe and his paint-splattered jeans. Laurie gave them something to really gossip about our last morning there, when she kissed Gabe on the mouth, right in front of the caf&eacute; window.

She and I were about three miles down the road when Laurie said, &ldquo;You know what, Hope? I&rsquo;m going to marry that man.&rdquo;

I studied her profile and solemnly said, &ldquo;I know.&rdquo;

I also knew that on June 19 Laurie and I would not be flying to Honolulu. Somehow, it was okay.

Many years later, when my husband and I saw one of Gabriel&rsquo;s paintings in a restaurant, I told Darren that, looking back on that season of my life, I realized I didn&rsquo;t need the actual trip to Hawai&rsquo;i as much as I had needed the possibility of such an adventure. That was what Laurie gave me&mdash;she dared me to dream when I wanted to die.

Darren said I should get back in touch with her because true friends like that are hard to come by.

&ldquo;I know,&rdquo; I said. &ldquo;But Gabe is practically famous now. They&rsquo;ve probably moved to an estate. She might not remember me.&rdquo;

&ldquo;I don&rsquo;t know if the phone number I have is right anymore.&rdquo;

&ldquo;You won&rsquo;t know until you dial it and see.&rdquo;

But what would I say? I miss you, Laurie. By any chance, do you still have the key to the back door of my heart? Because I have yet to make a duplicate and give it to another friend.

No. I wouldn&rsquo;t call Laurie or write her. The season of our friendship had passed.

Then, as only God can, He surprised me. I think He prompted Laurie to call out of the blue just to prove that He knows me by heart. He knows what I need even when I&rsquo;m too timid or belligerent to ask for it. Laurie and I had an unfinished dream. Neither of us had yet learned to do the hula.

The day Laurie called me she was in New York.

I was in the garage, mopping up psychedelic puddles of Rocket Pops. Our ancient freezer had coughed its last icy breath sometime during the night, and the entire summer supply of Little League frozen confections was forced to seek alternate accommodations. Unfortunately, the Popsicles tried this on their own and met with disaster.

&ldquo;Gabe has meetings all afternoon,&rdquo; Laurie said, after I recovered from the shock of hearing her voice in the middle of my mess. &ldquo;I know it&rsquo;s last minute, but I&rsquo;d love to drive up to see you.&rdquo;

I warned her about the Popsicle massacre. &ldquo;And it&rsquo;ll take you a couple of hours. Are you sure you want to drive?&rdquo;

I smiled. Yes, I remembered. Laurie had a passion for the open road. &ldquo;Are you going to rent a convertible?&rdquo;

&ldquo;You know it! Now don&rsquo;t go to any trouble.&rdquo;

I hung up the phone, rinsed my permanently cherry-scented mop, and frantically began cleaning the rest of my humble abode like Tigger on steroids.