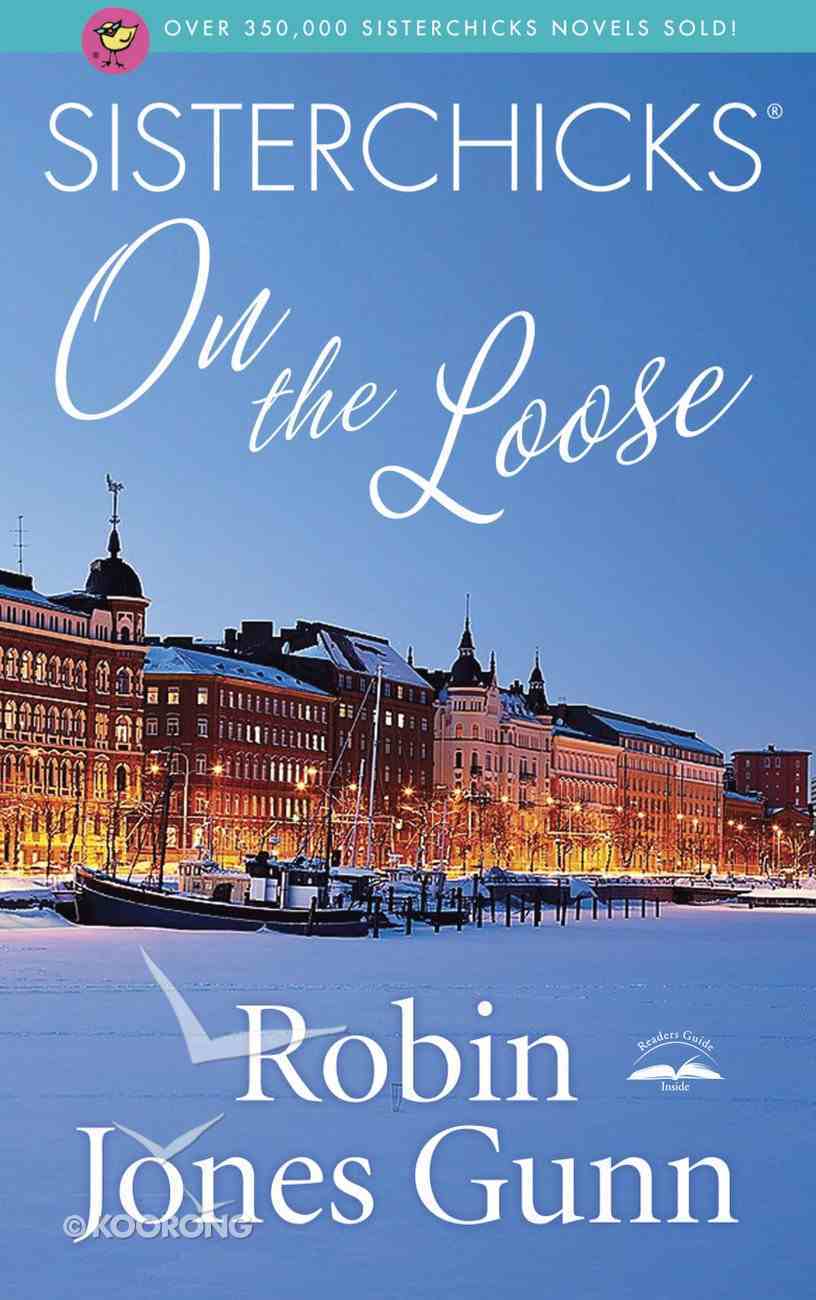 Sharon has lived calmly in Chinook Springs, Washington her entire life. All that changes when her best friend of twenty years, Penny, takes an impulsive trip to seek out her only living relatives in Finland - and takes Sharon with...

Sharon has lived calmly in Chinook Springs, Washington her entire life. All that changes when her best friend of twenty years, Penny, takes an impulsive trip to seek out her only living relatives in Finland - and takes Sharon with her. The land of reindeer and saunas holds infinite varieties of zaniness for these two unlikely friends - Sharon is a quiet mother of four and Penny was a motorcycle mama before she came to Christ - who return home with a new view of God, a new zest for life, and a big impact on those around them for decades to come.
- Publisher.

Sharon has lived calmly in Chinook Springs, Washington, her entire life. All that changes when her best friend of twenty years, Penny, takes an impulsive trip to seek out her only living relatives in Finland -- and brings Sharon with her. The land of reindeer and saunas holds infinite varieties of zaniness for these two unlikely friends -- Sharon is a quiet mother of four and Penny was a motorcycle mama before she came to Christ -- who return home with a new view of God, a new zest for life, and a big impact on those around them for decades to come.

Get set for adventure as the sisterchicks drive, float, or fly off to faraway places—exploring new territory and delighting in the soul ties that forever bind their hearts.

Sisterchick n.: a friend who shares the deepest wonders of your heart, loves you like a sister, and provides a reality check when you’re being a brat.

Meet unlikely best friends Sharon, quiet mother of four, and Penny, former flower child/motorcycle mama. Connected as young moms, their twenty-year friendship is about to take a surprising leap! Penny hatches plans for a “post-kids” trip to seek out her only living relatives—somewhere in far-off Finland.

Oh, Penny Girl, what have you done?

The land of reindeer, Finnish saunas, and starry, starry nights holds infinite promise for the free-flying sisterchicks, who feel their hearts fill with a new zest for living…and a fresh view of the One who flung the galaxies across the heavens!
-Publisher

When my husband, Jeff, tells this story, he says it started the day I dyed my hair green. He likes to tell how he found me on the bathroom floor with an airline ticket in one hand and a can of root beer in the other, crying my eyes out.

I prefer to start this story where it actually began&mdash;more than a decade before the green hair incident. One hot August night in 1982, my dearest friend of all time, Penny, and I were on duty in the church nursery. Seven of the sweaty children in the nursery that Sunday evening belonged to the two of us.

I was rocking my wailing daughter when Penny, in the middle of a diaper change, turned to me. &ldquo;Let&rsquo;s make a deal, Sharon. When they graduate, let&rsquo;s go somewhere. Just the two of us.&rdquo;

I stopped and stared to see if she was serious. She was.

I suppose I should back up this story to when Penny and I first met. Penny and Dave were married and expecting their first child. That&rsquo;s when they started to attend our conservative little church in Chinook Springs, Washington. They joined our home Bible study and pulled up that first night on a motorcycle, wearing matching suede jackets with fringe on the arms&mdash;but with no Bibles. Penny left her muddy boots by the front door and settled on my tattered couch as still as a tiger concealed in the brush. I&rsquo;d never had such a potentially wild person in my house before.

The next week, Penny showed up with a burlap sack stuffed with freshly dug-up iris bulbs. She asked if I had a Bible she could borrow, and our friendship was off to a tender, unconventional start. That was twenty-four years ago.

Penny and I were in each other&rsquo;s everyday lives while raising our children. Our husbands swapped tools and went fishing on Saturday mornings. Penny and I never had a fight.

Then Dave landed the job he always had wanted at a big computer company, and the Lane family packed up and moved to San Francisco.

For a month I cried when no one was looking. Our phone bill went into triple digits. Penny kept saying we would get together, just the two of us, but nothing ever worked out. My separation anxiety lasted for two embarrassing years.

This is where my husband picks up the story. Jeff says that out of the blue, Penny decided to go to Finland. He doesn&rsquo;t remember the part about the church nursery where the idea was hatched more than a decade before Penny put wings to her plan. Jeff says he found me curled up against the bathroom wall, staring at the ticket and guzzling root beer.

Jeff says I was sobbing because I was in shock.

I wasn&rsquo;t sobbing. I was sighing really loud. There is a difference.

Jeff likes to add a punch line here about how I dramatically pulled the towel off my head and&mdash;ta-da!&mdash;my hair was green.

That part, unfortunately, is true.

For almost eleven years now I&rsquo;ve listened to my dear husband&rsquo;s account of the once-in-a-lifetime trip Penny and I took to Finland in February 1993. He loves to embellish, so every time he tells it, the story morphs into something that only vaguely resembles our real adventure.

Last Friday, Jeff had our new daughter-in-law in a state of stunned silence while going on about the night Penny and I accompanied two seventy-year-old women into a Finnish sauna. Jeff said we got all steamed up and then jumped in a frozen lake.

It wasn&rsquo;t a lake. It was just the snow. The snow and a single star. Jeff never includes the part about the star.

I got so mad at him. As soon as everyone left, I said, &ldquo;I don&rsquo;t want you to tell stories about Finland anymore. You get it all wrong, and it&rsquo;s not even your story. It&rsquo;s my story. Penny&rsquo;s and mine.&rdquo;

A sly grin appeared on Jeff&rsquo;s face, and I immediately knew what he was thinking. He finally had succeeded in pushing me into the corner where a pad of paper and a pen had been waiting for me for years.

So here I sit, in my corner of the world, ready to tell the story the way it really happened&hellip;about how Penny and I jumped over the moon.

Oh,Penny Girl, what have you done? That&rsquo;s what I was thinking when Jeff found me on the bathroom floor sighing. I truly thought Penny had gone too far this time.

For years the amazing Penny had blazed through life like a fearless comet in the vast summer night sky. I followed close behind as a cosmic DustBuster, content to collect her sparkling trail of wonder dust. Whenever Penny ignited a sentence with the words &ldquo;what if,&rdquo; she took off soaring. I found bliss in the glittering possibilities that fell over my life in those moments.

Truth be told, we rarely did any of the things Penny dreamed up for us. I didn&rsquo;t think we actually would go to Finland. I thought we would talk big, buy travel guides, discuss sensible walking shoes, and in the end, cash in the tickets.

Penny, however, never doubted this adventure.

When she sent my ticket, she wrote with a thick, black marker across the front of the FedEx mailer:

SHARON, DO NOT OPEN! CALL ME IMMEDIATELY!

Thirty-five minutes earlier I had doused my hair with a highlighting solution, and I knew I should be heading for the shower. But I went directly to the phone and dialed Penny&rsquo;s real estate office in San Francisco.

&ldquo;Okay, Sharon, go ahead. Now you can open it. Read the itinerary.&rdquo;

The words, &ldquo;San Francisco, London, and Helsinki,&rdquo; tumbled from my lips.

&ldquo;And?&rdquo; Penny prodded. &ldquo;Did you notice the name on the ticket? Sharon Andrews. That&rsquo;s your ticket. We&rsquo;re going to Finland!&rdquo;

&ldquo;Yep! Crazy like a daisy. February 25. Pack your bags, girl! We&rsquo;re finally going to run away from home!&rdquo;

&ldquo;We made a deal. You promised you would go with me to Helsinki and back. Remember?&rdquo;

&ldquo;Yes, but we were going to go after all our kids graduated. Tyler is the only one in college. It will be, what?&hellip;Eight more years before all our kids are out of the house.&rdquo;

&ldquo;Exactly. And I can&rsquo;t wait that long. Life is too short. We need to go now.&rdquo;

I stammered and stuttered while Penny gave me instructions on obtaining a passport. By the time I hung up and dashed upstairs to the shower, the home coloring treatment had pushed my hair past summer sun highlights all the way to a disturbing autumn moss tone.

The strange part was I didn&rsquo;t have the emotional reserves left to process how I felt about my hair. I wrapped myself in the comfort of my old yellow robe and sank to the bathroom floor, staring at the airline ticket and sighing over the possibilities.

I had been on an airplane only once. I know that&rsquo;s unusual, but I led a small life. Jeff and I both grew up here in Chinook Springs, a quiet suburb in southern Washington State. We were high school sweethearts and married right after we graduated. Jeff and his brother ran a landscaping business. I was content to keep a tidy home for Jeff and our four kids. That was my life. It was a good life. I wasn&rsquo;t the kind of person who longed to see the rest of the world&mdash;or so I thought.

When Jeff found me on the floor, the first thing he said was, &ldquo;The ticket came, huh? What do you think?&rdquo;

He nodded and repressed that sly grin of his. &ldquo;Dave called me a couple of days ago. He said Penny wanted to surprise you.&rdquo;