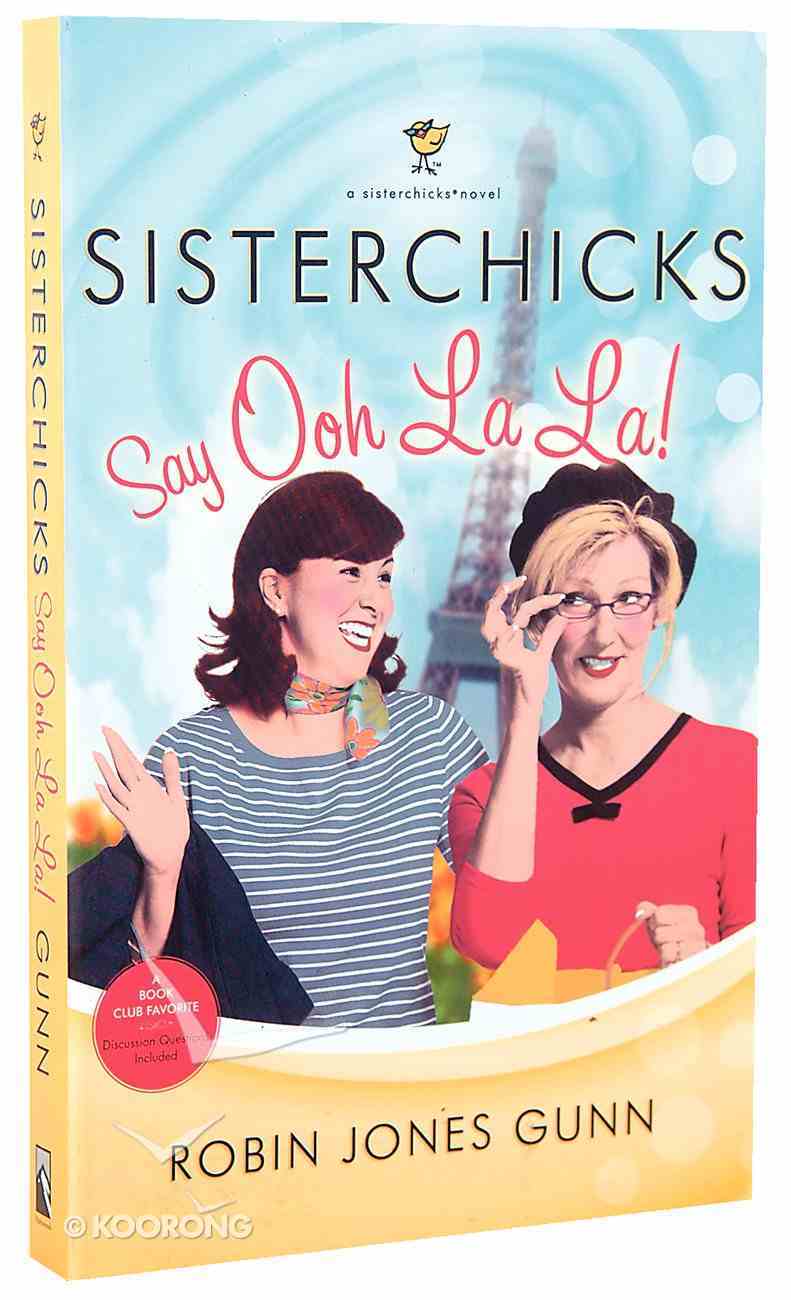 Childhood best friends Amy and Lisa promise each other that one day they will rendezvous in Paris. But life takes them on different paths and they lose touch. Years later they land in the same hospital emergency room, and their...

Childhood best friends Amy and Lisa promise each other that one day they will rendezvous in Paris. But life takes them on different paths and they lose touch. Years later they land in the same hospital emergency room, and their promise is rekindled!

All giggles and wiggles, Lisa and Amy sealed their friendship under the pink ruffles of a canopy bed, promising to be friends forever. They remained inseparable until an argument over Lisa’s prom date divides them. In a plan that could only be devised by their heavenly Father, Amy and Lisa end up in the same hospital emergency room years later. With their promise to always be there for each other unexpectedly fulfilled, the two friends grow close again. Amy reminds Lisa of one of their childhood promises yet to be realized—their plan to rendezvous in Paris. Amy and Lisa find a way to make good on their Parisian promise from thirty years ago and pack their bags for the adventure of a lifetime. From becoming unexpected counselors for a rocky marriage to scaling the Eiffel Tower to winking at Mona Lisa in the Louvre, these two Sisterchicks find the treasures of Europe can’t compare with the gems of a friendship renewed for eternity!

“Each of the Sisterchicks books portrays the reality of how a close friendship between two women can draw them closer to God, and reveal clear direction for their futures. In Sisterchicks Say Ooh-La-La!, readers discover the value of rekindling an old friendship and replacing old, incorrect assumptions with new truth. I hope readers will take away a sense of God’s immense plan for His children and His unending grace in every season of life.”

My best friend, Amy, likes to say her first words as a baby were, &ldquo;Ooh la la!&rdquo;

She also says her Parisian grandmere taught Amy to say merci instead of thank you and to walk with her shoulders back and her chin forward. From the day I met her, she always has carried herself with a ballerina-like posture. If it&rsquo;s possible for a woman to be elegant at age eight, Amy was.

Amy arrived in our uncouth corner of Memphis in the middle of our third-grade year. She moved into the big brick house on Forrest Avenue with her mother and grandmother. Her mother had flawless creamy skin that made me want to touch her face and hands. Her grandmere spoke only French and wore an expensive perfume that, whenever I got close to her, came home with me in a pillowy after-cloud. At my house, I was the youngest of five and the only girl. Stepping into Amy&rsquo;s pink palace of femininity was my first brush with bliss.

The day Amy entered our class as the new girl, during roll call I studied her long raven tresses. How did she manage to balance her crisp white hair bow so perfectly on the back of her head?

At recess I followed her out to the playground. She turned around and, to my surprise, confided in me as if I were her best friend. &ldquo;My real name isn&rsquo;t Amy. It&rsquo;s Amelie Jeanette. Most people can&rsquo;t pronounce Amelie Jeanette the right way.&rdquo;

&ldquo;I bet I can.&rdquo; The advantage of being the youngest with all those brothers was knowing how to accept every challenge and feign fearlessness. That is, until I got hurt. Then I would run away and hide.

Amy raised one of her Elizabeth Taylor eyebrows and waited for me to prove my stuff. I carefully repeated her first and middle names and then added her last name, &ldquo;DuPree,&rdquo; just to prove I&rsquo;d been paying attention in class. She was impressed.

She got my middle name wrong, but I didn&rsquo;t correct her. It was the spring of 1968, and everyone in Memphis, and maybe the rest of the world, had heard the name Lisa Marie that February when Elvis announced he and Priscilla had a baby girl. I liked being called Lisa Marie. Marie was much better than my real middle name, which I had never revealed to anyone.

For an entire week Amy and I were inseparable at school. She brought a package of Hostess Twinkies for lunch every day and always gave me the second one. When I was asked to choose a partner on my day as milk monitor, I chose Amy. It was the happiest stretch of my elementary career and a definite turning point in my no-frills childhood.

My reveling, however, took a nosedive at the end of our first week as best friends when Amy asked, &ldquo;Do you want to come to my house after school today and play Barbies?&rdquo;

&ldquo;Barbies?&rdquo; I repeated, feeling the walls of our brief Camelot crumble. My mother had unbendable views on Barbie dolls. She said Barbies were &ldquo;unrealistic&rdquo; in proportions, &ldquo;unsavory&rdquo; as role models, and an &ldquo;unnecessary&rdquo; waste of a young girl&rsquo;s leisure time. I rarely was allowed to play with other girls once my mother found out they owned Barbies. Girls who came to my house were expected to play hopscotch.

&ldquo;I don&rsquo;t have any Barbies,&rdquo; I said.

&ldquo;That&rsquo;s okay; you can play with mine. I have eight,&rdquo; Amy said. &ldquo;And two Kens.&rdquo;

&ldquo;Amelie Jeanette.&rdquo; I tried to appeal to something deeper in her than even I understood. &ldquo;I have to tell you something.&rdquo;

This part of the story is where Amy shines best. She listened, eyes unblinking, as I explained my mother&rsquo;s ban on all things Barbie and her indictment against Ken dolls.

Amy slid her arm around my shoulder. &ldquo;Leave it to me, Lisa. Your mother will never know.&rdquo;

&ldquo;But I will,&rdquo; I said, suffering from a strong sense of right and wrong. &ldquo;I&rsquo;ll know about the Barbies at your house. And the Kens.&rdquo;

&ldquo;Not if I never take them out of the closet.&rdquo;

With a flip of her ponytail she said, &ldquo;Whenever you come over, I&rsquo;ll leave them in the closet.&rdquo;

&ldquo;Amy, are you saying you would give up Barbies for me?&rdquo;

I blinked almost as fast as a hummingbird&rsquo;s wings and told Amy I had something in my eye. I wasn&rsquo;t used to crying. But then, no other girl had ever been willing to give up Barbies for me.

True to her word, Amy never pulled her Barbies or her Kens out of the closet when I went over to her house. Not even once. I made it through childhood without defying my mother. I saved that delicacy for adulthood.

All Amy asked in return was for a few promises. Some of the promises were sweet, like agreeing to be each other&rsquo;s bridesmaid. Some were silly, like always reading the same Nancy Drew book at the same time and never reading a chapter ahead.

One promise was ridiculous, but I agreed to it anyway. Amy wanted us to go to Paris when we grew up. She said she wanted to stroll down some boulevard called the Champs-Elys&eacute;es wearing high-heeled shoes and sunglasses. She said that would prove we were stylish. I could use all the style lessons I could get, so I willingly agreed to go with her.

That was before we had a falling out in high school and went our separate ways. We didn&rsquo;t talk to each other for eight years. Such a thing never should have happened to two friends such as we, but that&rsquo;s what happened.

During our separation I formed my own opinions of Amy&rsquo;s beloved France. I came to the conclusion that I never would go to Paris. Not even with Amy. Not even because I promised her I would.

However, I&rsquo;m beginning to believe that every promise can be heard in the celestial courts, which gives every promise the potential of becoming something of eternal significance. I don&rsquo;t know how it works. I don&rsquo;t know if God really was listening to the &ldquo;forever friends&rdquo; promises Amy and I made under the ruffles of her canopy bed when we were young. All I know is that Amy&rsquo;s and my childhood promises were unexpectedly called back into play on a rainy autumn afternoon in the emergency room of Cincinnati General Hospital.