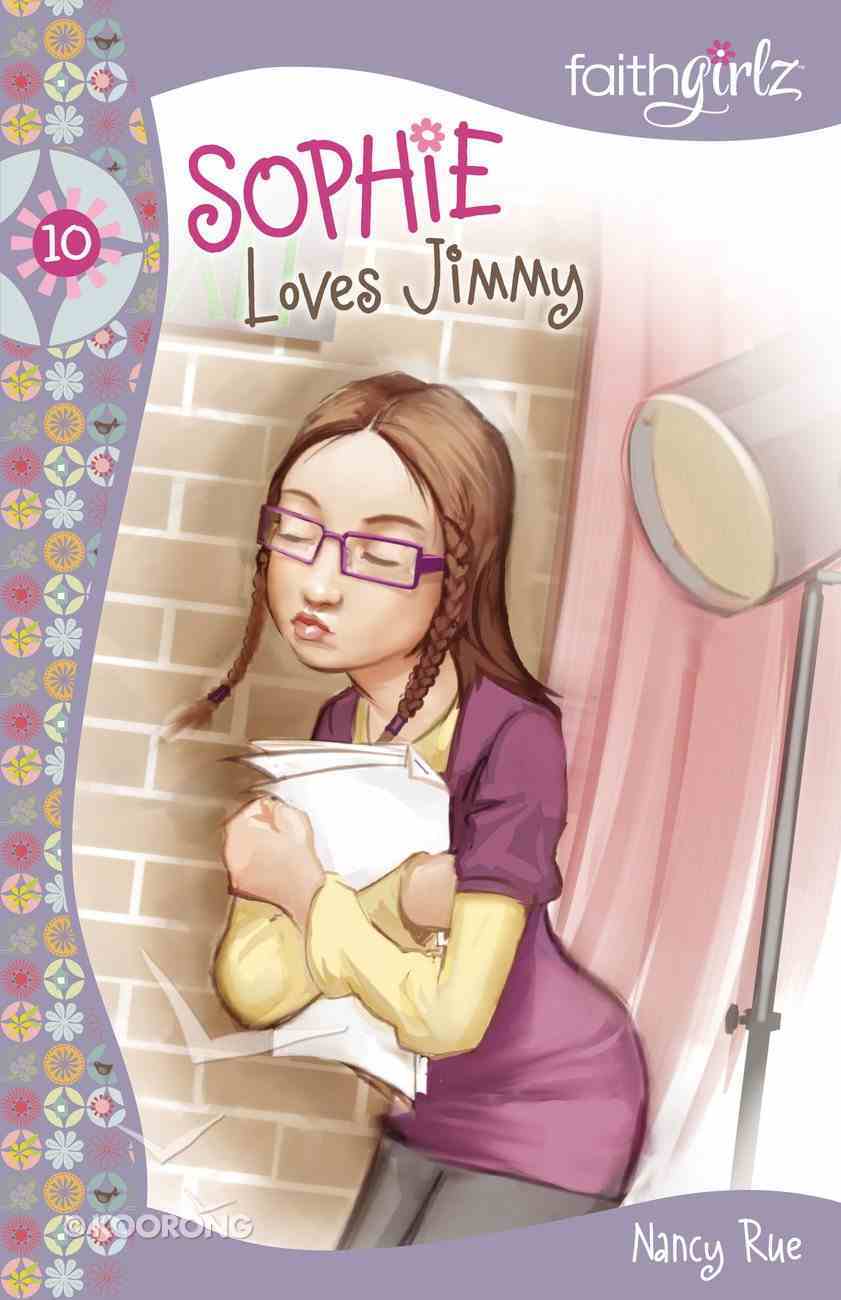 Sophie and Jimmy spend a lot of time together - working on the Christmas film for church and other projects. People spread rumours that Sophie loves Jimmy. Sophie doesn't see why a rumour that isn't true should stop her from...

Sophie and Jimmy spend a lot of time together - working on the Christmas film for church and other projects. People spread rumours that Sophie loves Jimmy. Sophie doesn't see why a rumour that isn't true should stop her from being Jimmy's friend - but when even the Corn Flakes start to believe the whispers, she is hurt to the core. Now it's an open question whether she and the rest of the Flakes can ever be friends again!
- Publisher.

God wants us to forgive each other the way he forgives us. What actually happened and what people believe happened are often two very different things. But it doesn't matter: gossip at school can cause the worst kind of trouble, even for innocent bystanders. In Sophie Loves Jimmy, girls read firsthand about the consequences of seemingly harmless talk.
-Publisher

Sophie Loves Jimmy Copyright copy; 2006 by Nancy Rue This is a work of fiction. The characters, incidents, and dialogue are products of the author's imagination and are not to be construed as real. Any resemblance to actual events or persons, living or dead, is entirely coincidental. Requests for information should be addressed to: Zonderkidz, 5300 Patterson Ave. SE Grand Rapids, Michigan 49530 Library of Congress Cataloging-in-Publication Data Rue, Nancy N. Sophie loves Jimmy / Nancy Rue. p. cm. -- (The Sophie series ; bk. 10) (Faithgirlz!) Summary: Paired with her classmate Jimmy for school and church projects, twelve-year-old Sophie must find a way to dispel the boyfriend rumors and to stop the cyberbullying campaign directed against her and a former school bad boy. ISBN-13: 978-0-310-71025-7 (softcover) ISBN-10: 0-310-71025-1 (softcover) [1. Bullying--Fiction. 2. Computers--Fiction. 3. Cliques (Sociology)--Fiction. 4. Schools--Fiction. 5. Christian life--Fiction.] I. Title. II. Series. PZ7.R88515Sjp 2006 [Fic]--dc22 2005025259 All rights reserved. No part of this publication may be reproduced, stored in a retrieval system, or transmitted in any form or by any means-electronic, mechanical, photocopy, recording, or any other-except for brief quotations in printed reviews, without the prior permission of the publisher. All Scripture quotations, unless otherwise indicated, are taken from the HOLY BIBLE, NEW INTERNATIONAL VERSION reg; NIVreg;. Copyright copy; 1973, 1978, 1984 by International Bible Society. Used by permission of Zondervan. All Rights Reserved. Zonderkidz is a trademark of Zondervan. Published in association with the literary agency of Alive Communications, Inc., 7680 Goddard Street, Suite 200, Colorado Springs, CO 80920. Photography: Synergy Photographic/Brad Lampe Illustrations: Grace Chen Design & Illustration Art direction: Merit Alderink Interior design: Susan Ambs Interior composition: Ruth Bandstra Printed in the United States of America 06 07 08 09 10 bull; 6 5 4 3 2 1 Cynthia Cyber, Internet Investigator, leaned toward the computer screen, eyes nearly popping from her head. Could it be that a kid would actually be enough of a bully to print something like THAT for all the middleschool world to see? Impossible-and yet, there it was, a sentence that was already showing its ugly self on computers in bedrooms all over Poquoson, Virginia, and maybe even beyond. It was a sentence that could ravage the social life of its seventh-grade victim before she even checked her email. "I cannot allow it!" Cynthia Cyber, Internet Investigator, cried. She lunged for the keyboard, fingers already flying- "It's a seven-passenger van, Little Bit," said a voice from the driver's seat. "You don't have to sit in Jimmy's lap." Sophie LaCroix jolted back from Sophie-world at several megahertz per second-or something like that. She found herself staring right into Jimmy Wythe's swimming-pool-blue eyes. She had no choice. She really was in his lap. A round, red spot had formed at the top of each of Jimmy's cheekbones. Sophie was sure her entire face was that color. "Do you want to sit on this side?" Jimmy said as Sophie scrambled her tiny-for-a-twelve-year-old body back into her own seat. "We could trade." "I don't think that's what she had in mind." Hannah turned around from the van's middle seat in front of them, blinking her eyes against her contact lenses practically at the speed of sound. She was Sophie's inspiration to keep wearing glasses. "Personally, I think seventh grade's a little young to be dating. I know I'm
-Publisher

Sophie and Jimmy spend a lot of time together---working on the Christmas film for church and other projects. People spread rumors that Sophie loves Jimmy. Are the rumors true?'Excellent for Homeschool Use'
-Publisher