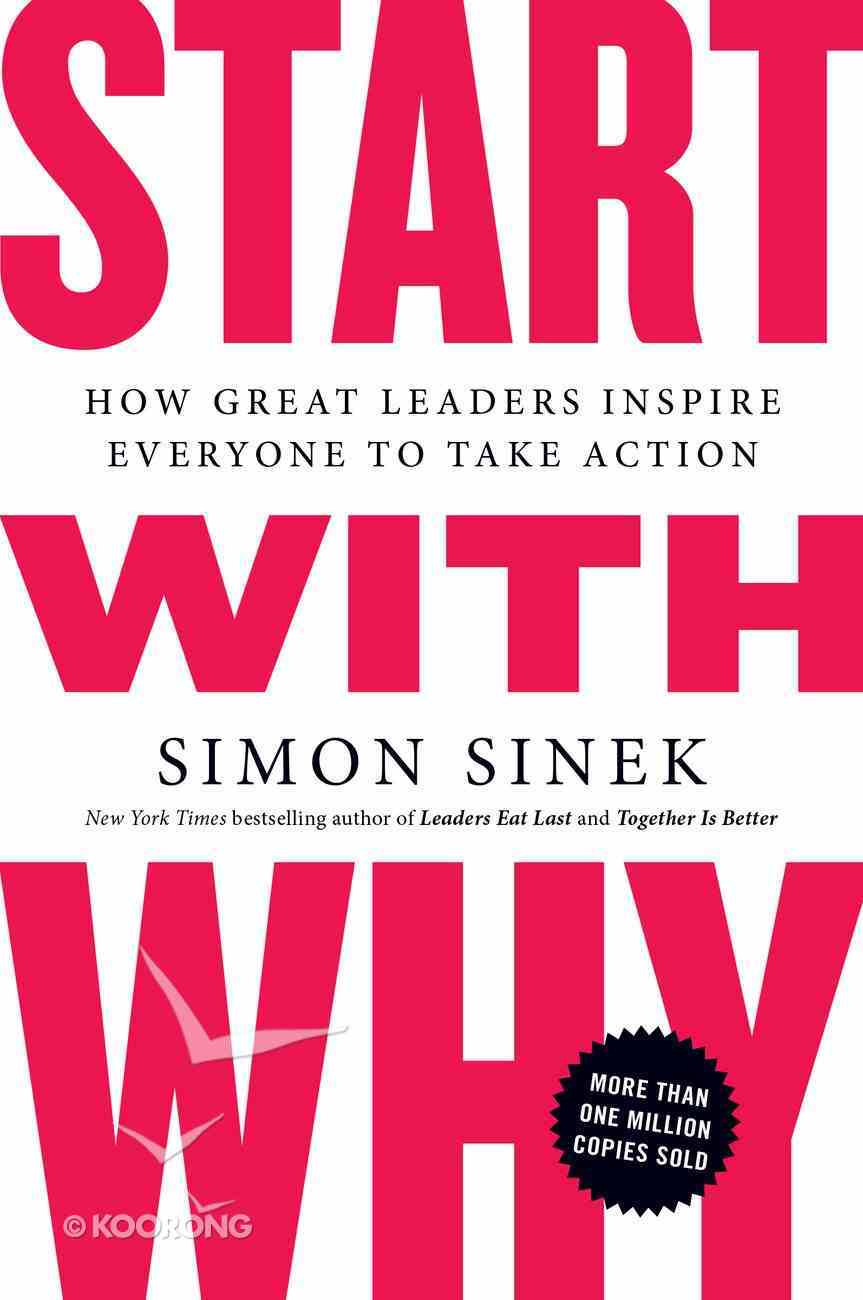 Start With Why: How Great Leaders Inspire Everyone to Take Action

:The inspiring, life-changing bestseller by the author of LEADERS EAT LAST and TOGETHER IS BETTER. In 2009, Simon Sinek started a movement to help people become more inspired at work, and in turn inspire their colleagues and...

:The inspiring, life-changing bestseller by the author of LEADERS EAT LAST and TOGETHER IS BETTER.

In 2009, Simon Sinek started a movement to help people become more inspired at work, and in turn inspire their colleagues and customers. Since then, millions have been touched by the power of his ideas, including more than 28 million who've watched his TED Talk based on START WITH WHY -- the third most popular TED video of all time.

Sinek starts with a fundamental question: Why are some people and organizations more innovative, more influential, and more profitable than others? Why do some command greater loyalty from customers and employees alike? Even among the successful, why are so few able to repeat their success over and over?

People like Martin Luther King Jr., Steve Jobs, and the Wright Brothers had little in common, but they all started with WHY. They realized that people won't truly buy into a product, service, movement, or idea until they understand the WHY behind it.

START WITH WHY shows that the leaders who've had the greatest influence in the world all think, act, and communicate the same way -- and it's the opposite of what everyone else does. Sinek calls this powerful idea The Golden Circle, and it provides a framework upon which organizations can be built, movements can be led, and people can be inspired. And it all starts with WHY.
-Publisher

Simon Sinek, an unshakable optimist, is the author of the bestselling book Start with Why, which challenged traditional assumptions about how great leaders and great companies inspire people. He has presented his ideas to Fortune 100 companies and small start-ups; to nonprofits and members of Congress; to foreign ambassadors and the highest levels of the U.S. military, among many others. His TEDTalk based on Start with Why is the second most popular video of all time on TED.com. He lives in New York City.

Start With Why
Simon Sinek
Paperback

:1
ASSUME YOU KNOW
On a cold January day, a forty-three-year-old man was
sworn in as the chief executive of his country. By his side
stood his predecessor, a famous general who, fi fteen years
earlier, had commanded his nation&rsquo;s armed forces in a war
that resulted in the defeat of Germany. The young leader
was raised in the Roman Catholic faith. He spent the next
fi ve hours watching parades in his honor and stayed up
celebrating until three o&rsquo;clock in the morning.
You know who I&rsquo;m describing, right?

It&rsquo;s January 30, 1933, and I&rsquo;m describing Adolf Hitler and not,
as most people would assume, John F. Kennedy.
The point is, we make assumptions. We make assumptions
about the world around us based on sometimes incomplete or false
information. In this case, the information I offered was incomplete.
Many of you were convinced that I was describing John F. Kennedy
until I added one minor little detail: the date.

This is important because our behavior is affected by our assumptions
or our perceived truths. We make decisions based on
what we think we know. It wasn&rsquo;t too long ago that the majority of
people believed the world was fl at. This perceived truth impacted behavior.
During this period, there was very little exploration. People
feared that if they traveled too far they might fall off the edge
of the earth. So for the most part they stayed put. It wasn&rsquo;t until
that minor detail was revealed&mdash;the world is round&mdash;that behaviors
changed on a massive scale. Upon this discovery, societies
began to traverse the planet. Trade routes were established; spices
were traded. New ideas, like mathematics, were shared between societies
which unleashed all kinds of innovations and advancements.
The correction of a simple false assumption moved the human race
forward.

Now consider how organizations are formed and how decisions
are made. Do we really know why some organizations succeed and
why others don&rsquo;t, or do we just assume? No matter your defi nition
of success&mdash;hitting a target stock price, making a certain amount
of money, meeting a revenue or profi t goal, getting a big promotion,
starting your own company, feeding the poor, winning public
offi ce&mdash;how we go about achieving our goals is very similar. Some
of us just wing it, but most of us try to at least gather some data so
we can make educated decisions. Sometimes this gathering process
is formal&mdash;like conducting polls or market research. And
sometimes it&rsquo;s informal, like asking our friends and colleagues for
advice or looking back on our own personal experience to provide
some perspective. Regardless of the process or the goals, we all want
to make educated decisions. More importantly, we all want to make
the right decisions.

As we all know, however, not all decisions work out to be the
right ones, regardless of the amount of data we collect. Sometimes
the impact of those wrong decisions is minor, and sometimes it can
be catastrophic. Whatever the result, we make decisions based on a
perception of the world that may not, in fact, be completely accurate.
Just as so many were certain that I was describing John F.
Kennedy at the beginning of this section. You were certain you were
right. You might even have bet money on it&mdash;a behavior based on
an assumption. Certain, that is, until I offered that little detail of
the date.

Not only bad decisions are made on false assumptions. Sometimes
when things go right, we think we know why, but do we really?
That the result went the way you wanted does not mean you
can repeat it over and over. I have a friend who invests some of his
own money. Whenever he does well, it&rsquo;s because of his brains and
ability to pick the right stocks, at least according to him. But when
he loses money, he always blames the market. I have no issue with
either line of logic, but either his success and failure hinge upon his
own prescience and blindness or they hinge upon good and bad
luck. But it can&rsquo;t be both.

So how can we ensure that all our decisions will yield the best
results for reasons that are fully within our control? Logic dictates
that more information and data are key. And that&rsquo;s exactly what
we do. We read books, attend conferences, listen to podcasts and
ask friends and colleagues&mdash;all with the purpose of fi nding out
more so we can fi gure out what to do or how to act. The problem
is, we&rsquo;ve all been in situations in which we have all the data and get
lots of good advice but things still don&rsquo;t go quite right. Or maybe
the impact lasted for only a short time, or something happened
that we could not foresee. A quick note to all of you who correctly
guessed Adolf Hitler at the beginning of the section: the details I
gave are the same for both Hitler and John F. Kennedy, it could have
been either. You have to be careful what you think you know. Assumptions,
you see, even when based on sound research, can lead
us astray.

Intuitively we understand this. We understand that even with
mountains of data and good advice, if things don&rsquo;t go as expected,
it&rsquo;s probably because we missed one, sometimes small but vital detail.
In these cases, we go back to all our sources, maybe seek out
some new ones, and try to fi gure out what to do, and the whole
process begins again. More data, however, doesn&rsquo;t always help, especially
if a fl awed assumption set the whole process in motion in
the fi rst place. There are other factors that must be considered, factors
that exist outside of our rational, analytical, informationhungry
brains.

There are times in which we had no data or we chose to ignore
the advice or information at hand and just went with our gut and
things worked out just fi ne, sometimes even better than expected.
This dance between gut and rational decision-making pretty much
covers how we conduct business and even live our lives. We can
continue to slice and dice all the options in every direction, but at
the end of all the good advice and all the compelling evidence, we&rsquo;re
left where we started: how to explain or decide a course of action
that yields a desired effect that is repeatable. How can we have 20/20
foresight?

There is a wonderful story of a group of American car executives
who went to Japan to see a Japanese assembly line. At the
end of the line, the doors were put on the hinges, the same as in
America. But something was missing. In the United States, a line
worker would take a rubber mallet and tap the edges of the door to
ensure that it fi t perfectly. In Japan, that job didn&rsquo;t seem to exist.
Confused, the American auto executives asked at what point they
made sure the door fi t perfectly. Their Japanese guide looked at
them and smiled sheepishly. &ldquo;We make sure it fi ts when we design
it.&rdquo; In the Japanese auto plant, they didn&rsquo;t examine the problem
and accumulate data to fi gure out the best solution&mdash;they engineered
the outcome they wanted from the beginning. If they didn&rsquo;t
achieve their desired outcome, they understood it was because of a
decision they made at the start of the process.

At the end of the day, the doors on the American-made and
Japanese-made cars appeared to fi t when each rolled off the assembly
line. Except the Japanese didn&rsquo;t need to employ someone to
hammer doors, nor did they need to buy any mallets. More importantly,
the Japanese doors are likely to last longer and maybe even
be more structurally sound in an accident. All this for no other
reason than they ensured the pieces fi t from the start.

What the American automakers did with their rubber mallets is
a metaphor for how so many people and organizations lead. When
faced with a result that doesn&rsquo;t go according to plan, a series of
perfectly effective short-term tactics are used until the desired out-
come is achieved. But how structurally sound are those solutions?
So many organizations function in a world of tangible goals and the
mallets to achieve them. The ones that achieve more, the ones that
get more out of fewer people and fewer resources, the ones with an
outsized amount of infl uence, however, build products and companies
and even recruit people that all fi t based on the original
intention. Even though the outcome may look the same, great leaders
understand the value in the things we cannot see.

Every instruction we give, every course of action we set, every
result we desire, starts with the same thing: a decision. There are
those who decide to manipulate the door to fi t to achieve the desired
result and there are those who start from somewhere very
different. Though both courses of action may yield similar shortterm
results, it is what we can&rsquo;t see that makes long-term success
more predictable for only one. The one that understood why the
doors need to fi t by design and not by default.