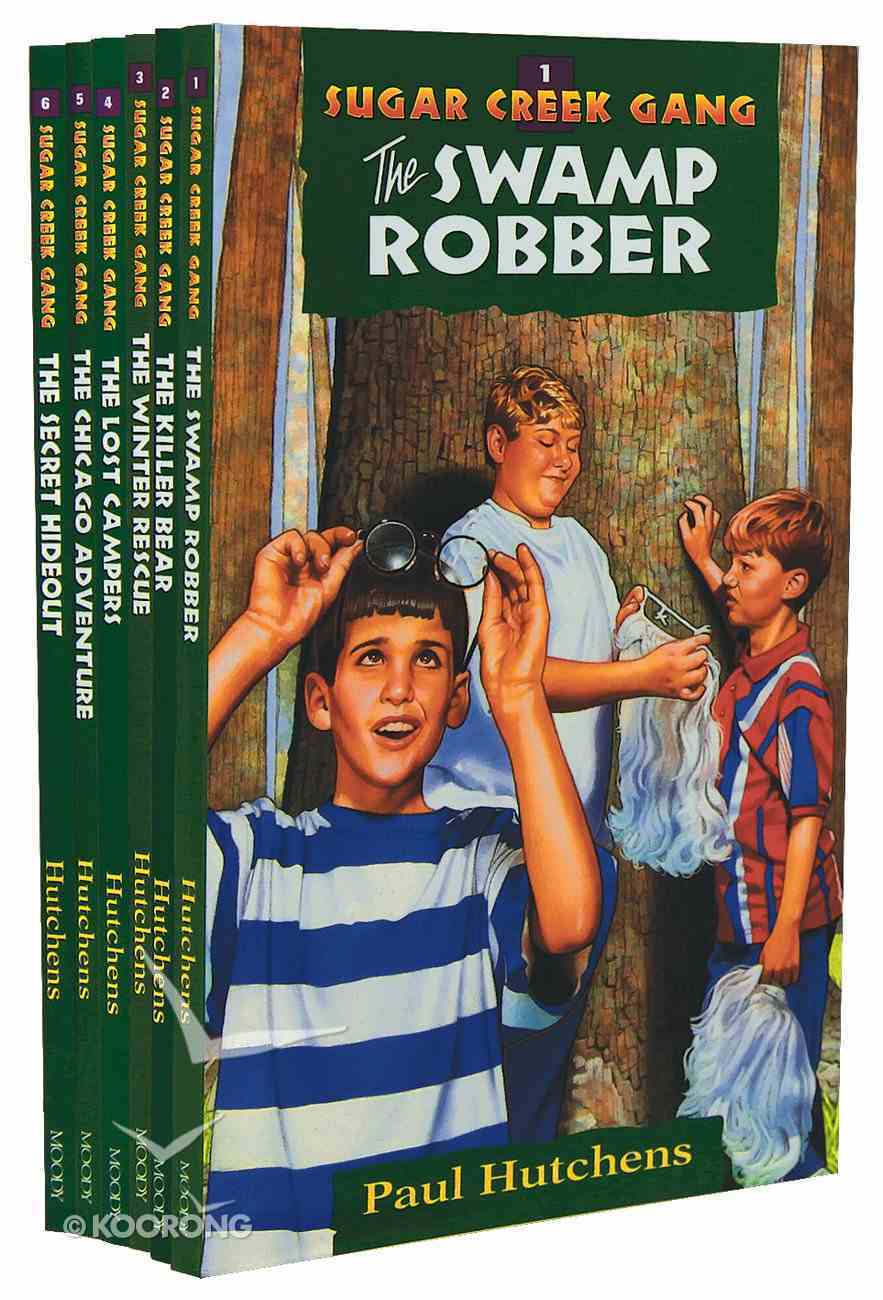 The Sugar Creek Gang sets out on adventures near and far. In the process, they solve mysteries and teach readers a thing or two.Save $5 by purchasing The Sugar Creek Gang Book Set #1-6 which include:The Swamp Robber #1The Killer Bear #2The Winter Rescue #3The Lost Campers #4The Chicago Adventure #5The Secret Hideout #6
-Publisher

This set includes books 1-6 in the Sugar Creek Gang Series: "The Swamp Robber, The Killer Bear, The Winter Rescue, The Lost Campers, The Chicago Adventure, " and "The Secret Hideout."
The tales and travels of the Sugar Creek Gang have passed the test of time, delighting young readers for more than fifty years. Great mysteries for kids with a message, "The Sugar Creek Gang" series chronicles the faith-building adventures of a group of fun-loving, courageous Christian boys. Your kids will be thrilled, chilled, and inspired to grow as they follow the legendary escapades of Bill Collins, Dragonfly, and the rest of the gang as they struggle with the application of their Christian faith to the adventure of life.
In "The Swamp Robber," the Sugar Creek Gang discovers a "disguise" hidden in a old tree. Does it belong to the bank robber hiding in the swamp? A mysterious map hidden near the tree proves to be even more exciting than the disguise. Before the adventure ends, the gang encounters the robber, helps Bill Collins welcome a new baby sister, and saves the victim of a black widow spider bite. Join the gang as they learn the lesson of "sowing and reaping."
In "The Killer Bear," Circus" Brown's father makes a life-changing decision at a revival meeting. Will he be able to stay on the narrow path? Back in the woods, the mean Till boys and the Sugar Creek Gang wrestle over a patch of wild strawberries. This leads to an encounter with an angry black bear. Join the gang as they learn to apply the lesson of forgiving seventy times seven in the face of great danger.
In "The Winter Rescue," the last swim of the summer ends miserably for the Sugar Creek Gang when someone steals Little Jim's pet baby bear. The search for the missing bear cub takes the gang through the woods to Old Man Paddler's cabin. When winter arrives, the boys return to the cabin, where they receive a startlingsurprise. Join the gang as they discover the power of prayer.
In "The Lost Campers," Bill Collins and Little Jim survive a wild ride on the flooded Sugar Creek thanks to the acrobatic efforts of their friend "Circus." When summer arrives, the gang heads to Pass Lake, Minnesota, for a camping trip. There they discover a railroad coach in the middle of a forest without any tracks, and an honest-to-goodness American Indian with beads and a war bonnet. Join the gang as the experience the meaning of being saved, both physically and spiritually.
In "The Chicago Adventure," the Sugar Creek Gang's adventure to Chicago is full of ups and downs. It starts with an airplane ride over a storm. The adventure includes museum visits, rescue mission ministry, performing on the radio at Moody Bible Institute, and an elevated train ride. A fight between Jim and Bob Till lands one of them in the hospital in critical condition. Join the Gang as they learn again that the only way to heaven is through Jesus.
In "The Secret Hideout," "Poetry" brings his muddy lamb into Miss Lilly's classroom, and chaos breaks out. The gang later discovers a mysterious cave with a hidden passage near the cemetery. When they spend the night in the cave, they are frightened by two very different visitors dressed in white. Could they be ghosts? Join the gang as Poetry's pet lamb provides a helpful explanation of Jesus' parable of the lost sheep.
-Publisher