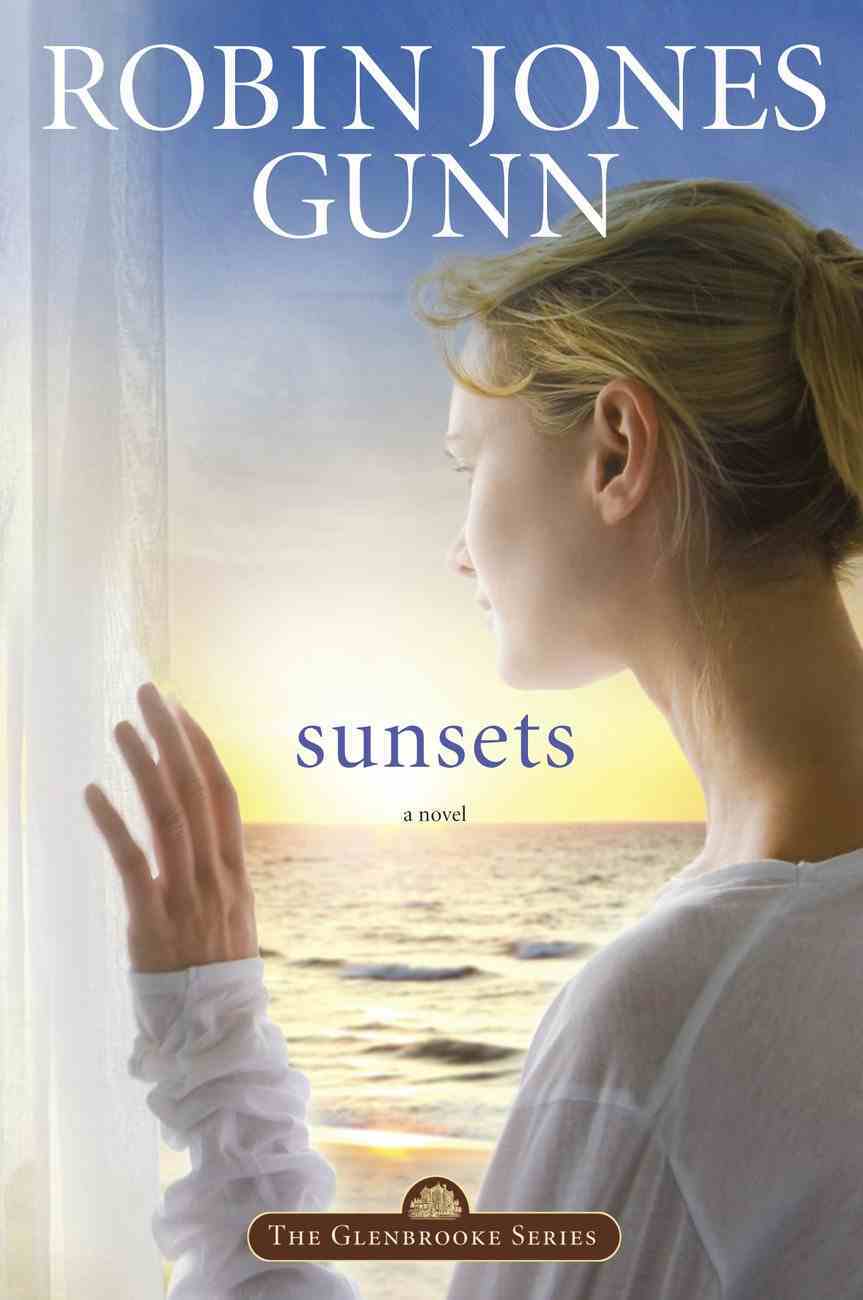 This bestselling former Palisades release is book in the new Glenbrooke series by award-winning author Robin Jones Gunn. Alissa loves her new job as a Pasadena travel agent. Only an abrupt meeting with a stranger in an espresso shop leaves...

This bestselling former Palisades release is book in the new Glenbrooke series by award-winning author Robin Jones Gunn. Alissa loves her new job as a Pasadena travel agent. Only an abrupt meeting with a stranger in an espresso shop leaves her feeling that all men in California are rude. To her dismay, Alissa soon learns that the man is none other than Brad Phillips, her new neighbor. But the coincidences don't stop there. For as the weeks unfold, Alissa's and Brad's lives keep intertwining in extraordinary ways. And as Alissa works through her longings for someone who will never leave her, she finds herself encountering love in places she never would have dreamed.

This bestselling former Palisades release is book in the new Glenbrooke series by award-winning author Robin Jones Gunn. Alissa loves her new job as a Pasadena travel agent. Only an abrupt meeting with a stranger in an espresso shop leaves her feeling that all men in California are rude. To her dismay, Alissa soon learns that the man is none other than Brad Phillips, her new neighbor. But the coincidences don't stop there. For as the weeks unfold, Alissa's and Brad's lives keep intertwining in extraordinary ways. And as Alissa works through her longings for someone who will never leave her, she finds herself encountering love in places she never would have dreamed. ^Alissa runs into this man everywhere she goes...coincidence, or part of some greater plan? ^Alissa loves her new job as a travel agent in Pasadena --the chance to start over. But shortly after her arrival, an abrupt meeting with a man at her favorite espresso shop leaves her wondering if all men in California are rud
-Publisher

"Coffee,&rdquo; Alissa muttered, pushing herself away from her cluttered desk, &ldquo;a tall caf&eacute; mocha, and I need it now. You want anything, Cheri?&rdquo;
&#160;
&ldquo;No, thanks,&rdquo; her co-worker said without looking up from her computer. &ldquo;Are you getting this same strange reading on the Mazatlan cruise package?&rdquo;

&ldquo;Yes,&rdquo; Alissa said after checking the computer screen over Cheri&rsquo;s shoulder. &ldquo;I got that reading when I tried to access the Alaska cruise package for the Andersens. But I&rsquo;m not ready to try again until after I&rsquo;ve had some coffee.&rdquo;

Cheri looked over the top of her glasses. &ldquo;We open in five minutes.&rdquo;

&ldquo;I know. I&rsquo;ll be back in four. Don&rsquo;t sell any cruise packages until then.&rdquo;

The line at Starbucks was shorter than usual. Alissa examined the pastries in the case. They had Cheri&rsquo;s favorite lemon bars this morning and lots of other incredible looking goodies.

She started her familiar mental workout. Croissant. I want a croissant. But I shouldn&rsquo;t. Too much fat. I&rsquo;ll have a muffin. A low-fat blueberry. Or a bagel. I can have a bagel. A bagel with fat-free cream cheese.

&ldquo;What can I start for you?&rdquo; the young woman behind the counter asked.
&#160;
Alissa hesitated.

The customer behind her spoke up. &ldquo;Cappuccino and a croissant.&rdquo;

&ldquo;Excuse me.&rdquo; Alissa turned to the casually dressed man behind her. &ldquo;I was next, and if you don&rsquo;t mind, I&rsquo;m in a hurry.&rdquo;

He wore his long brown hair with a crooked part down the middle. A soft cocoa stubble curved across his broad jaw, and his gaze struck her with intense clarity. Green eyes. Green like the grass after it rains.

&ldquo;So what took you so long?&rdquo; he said with a teasing smile.

Alissa raised her eyebrows and decided this must be his idea of a joke. Since she had moved to Pasadena seven months ago, she had met plenty of men who acted as if the world were their footstool, and therefore they could put up their feet whenever they wanted. Southern California was full of that sort.

Turning to the woman behind the counter, Alissa said calmly, &ldquo;I&rsquo;ll have a tall caf&eacute; mocha, a lemon bar, and a cinnamon roll. Thanks.&rdquo;

There was no point looking over her shoulder as she left Starbucks. The man with the intriguing green eyes wouldn&rsquo;t be watching her. Men used to watch her walk away. She could feel their gazes. Men used to offer to let her go first.

But that was thirty-two pounds ago. It had been far too long since a man had given her a second glance. Not that she blamed any of them. Much had changed in the life of Alissa Benson.

Wistfully, she remembered what it was like to be seventeen, sauntering through the sand at Newport Beach while everyone watched. That had been many summers ago, back when the ends of her long, blond hair had danced in the wind like the mane of a wild horse.

Today, a long, linen blazer covered her rounded hips, and her shoulder length, wavy blond hair was caught up in a twist, clipped flat against the back of her head. She rarely wore her blue tinted contact lenses anymore. Makeup was something she bothered with only on special occasions, of which there hadn&rsquo;t been many lately.

Alissa&rsquo;s live-in companion was a cat named Chloe, and her favorite weekend pastime was reading. At twenty-six she was living the life of a sixty-year-old. And she was safe.

&ldquo;She&rsquo;s right here,&rdquo; Cheri said, motioning to Alissa as she opened the door. &ldquo;I&rsquo;ll put you on hold, Mr. Brannigan.&rdquo;

&ldquo;Oh, terrific,&rdquo; Alissa muttered. She handed the pastry bag to Cheri. &ldquo;I picked up a little something for you.&rdquo;

A smile spread across Cheri&rsquo;s face. &ldquo;Did you bring me a lemon bar? You are a honey!&rdquo;

&ldquo;Don&rsquo;t touch my cinnamon roll!&rdquo; Alissa playfully responded as she slid behind her desk and reached for the phone. &ldquo;Good morning, Mr. Brannigan. Did your wife tell you I was able to reserve two nights for you at the Heathman?&rdquo;

With a few clicks on the computer keyboard, she tried to pull up the active file of the Brannigans as he said, &ldquo;We&rsquo;ve decided to stay three nights. Can you add one more night for us?&rdquo;

The computer screen froze. Alissa tapped on the keys. &ldquo;Certainly, Mr. Brannigan. May I call you back to confirm that?&rdquo;

Alissa knew he would. The Brannigans had to be the most active retired couple she knew. In good health and possessing excessive spending money, they traveled constantly. And with Alissa&rsquo;s efficiency and excessive good manners, she was their only travel agent.

&ldquo;I&rsquo;ve called the repairman. I don&rsquo;t know what the problem is. I guess all we can do is take messages. Don&rsquo;t forget your landlord. Line one.&rdquo;

With a push of a button and a deep breath, Alissa picked up line one. &ldquo;Clawson Travel Agency. This is Alissa.&rdquo;

&ldquo;Ms. Benson,&rdquo; the landlord said with forced friendliness. &ldquo;You have not responded to the notice we sent you last month. I have left messages on your machine at home, but you have not returned the calls. I found it necessary to call you at work to ask for a reply.&rdquo;

Alissa turned away from Cheri and the client who had just entered the shop and was seated in front of Cheri&rsquo;s desk. &ldquo;I&rsquo;m going to need more time to decide.&rdquo;

&ldquo;I&rsquo;m afraid there isn&rsquo;t any more time. I must know today by five o&rsquo;clock.&rdquo;

Alissa heard the click as he hung up, but she kept the phone to her ear as if the answer she needed would come sometime after the dial tone. Her condo complex had been sold a month ago. The new owner required all renters to sign a new lease that included an increase of $150 a month and a minimum commitment of two years. Alissa had never lived anywhere for more than two years. It was a nice condo but not her dream home. During the past month she had found nothing else in her price range. Yet the two-year commitment scared her. She had already been in Pasadena and at the same travel agency for seven months. That in itself was almost a record.

She heard a slight rustling sound and realized a customer was now seated in front of her desk. &ldquo;Okay. We&rsquo;ll work on that and get back to you then,&rdquo; she said into the dumb receiver that she still held to her ear. &ldquo;Good-bye.&rdquo;

Turning to hang up and greet her customer, Alissa forced a smile back on her face and said, &ldquo;Yes, how can I&mdash;&rdquo; She stopped. It was the guy from Starbucks. &ldquo;How can I help you?&rdquo;

He took a slow sip from his Starbucks cappuccino and looked at her with his grass green eyes. &ldquo;You&rsquo;re having trouble with your computers this morning?&rdquo;

It crossed Alissa&rsquo;s mind that perhaps this guy had followed her here and somehow overheard Alissa and Cheri say they had computer problems. For a brief flash, Alissa felt flattered that this man had apparently sought her out.

&ldquo;Alissa?&rdquo; Cheri called over. &ldquo;Excuse me for interrupting, but Mr. Brannigan is on the phone again. Do you want to take it?&rdquo;

&ldquo;My wife wanted me to ask about the special you advertised for the Alaskan cruise, but I forgot when I called earlier. Is there still room on the June trip?&rdquo;

&ldquo;I&rsquo;m having difficulty accessing the information on those cruises this morning. Would it be all right if I called you back this afternoon? That way I&rsquo;ll know about the extra night at the Heathman as well.&rdquo;

Alissa hung up and turned her attention to the man at her desk. &ldquo;What can I do for you?&rdquo;

&ldquo;Do you have local access, or do you have to go through a central clearing agency?&rdquo; Brad asked.

&ldquo;For the cruises,&rdquo; he said, getting up and coming over to her side of the desk. &ldquo;Do you have a local server for your info? Pull up the file. That might tell me.&rdquo; He reached over Alissa&rsquo;s shoulder and clicked on a few keys.

His forward approach startled Alissa. First at Starbucks and now this. Who did this guy think he was? &ldquo;I&rsquo;m sorry, but I can&rsquo;t allow you to do this.&rdquo;