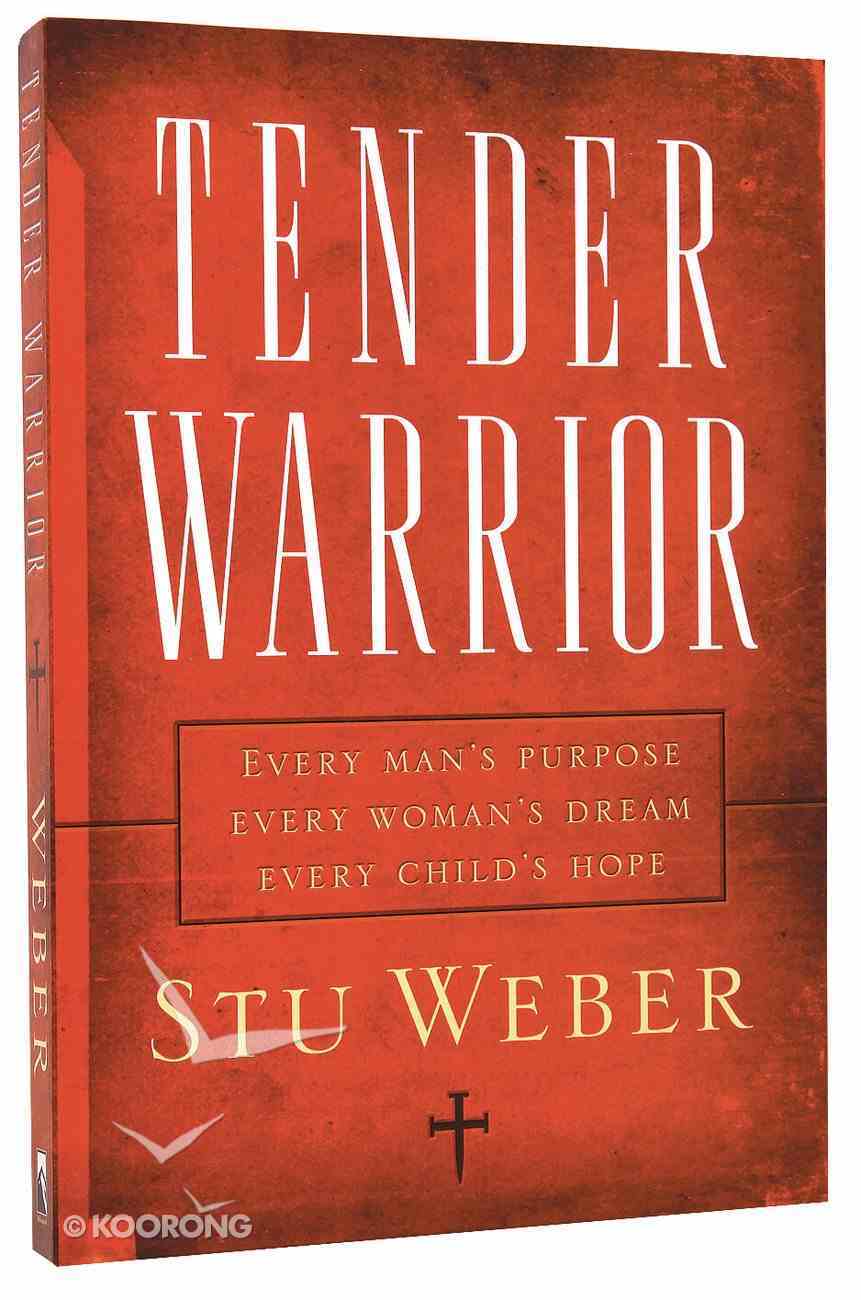 Leader. Protector. Friend. Lover. ^God made you to be each of these...and much more. Stu Weber 's bestseller, now revised throughout and refreshed with an attractive new look, paints a dramatic and compelling picture of balanced manhood according to God's...

Rise of the Servant Kings: What the Bible Says About Being a Man
Ken Harrison, Stu Weber (Fwd)
Paperback

Leader. Protector. Friend. Lover. ^God made you to be each of these...and much more. Stu Weber 's bestseller, now revised throughout and refreshed with an attractive new look, paints a dramatic and compelling picture of balanced manhood according to God's vision. Written in a warm, personal style, Weber presents the characteristics of tender warriors--including learning to speak the language of women, watching out for what lies ahead, and keeping commitments--in an upfront, straightforward style that challenges readers to realize God's plan for men. ^{BANNER ACROSS TOP: } ^More than 365,000 copies sold ^Some Things Are Worth Fighting For ^Young men aspire to it. Women admire it. Yet the definition of manhood itself is obscured by a culture in moral free fall. This book cuts through the fog and defines a powerful blueprint for being the man--the "Tender Warrior"--that God desires for you and your family. You'll discover that a Tender Warrior: watches out for what lies ah
-Publisher

Stu Weber is senior pastor of Good Shepherd Community Church near Gresham, Oregon. He is a much-in-demand international speaker and the author of the popular Four Pillars of a Man's Heart, Tender Warrior, All the King's Men, and Along the Road to Manhood. He and his wife, Linda, have three children: Kent, Blake, and Ryan. ý"From the Trade Paperback edition."

Wake-Up Call: A Man Faces Himself

The present time is of the highest importance&ndash;
it is time to wake up to reality . . .
The night is nearly over, the day has almost dawned. . . .
Let us arm ourselves for the fight of the day!
Romans 13:11&ndash;12, Phillips


How many times can a man hear a wake-up call without waking up? Some men, I suppose, never do. This man almost didn&rsquo;t.

I&rsquo;ve had two major wake-up calls at two crossroads in my life. Neither was much like the gentle ring of an alarm clock. Both were more akin to the crack of a two-by-four across the back of my skull. But I guess you could say I hit the snooze button twice before coming fully awake. The first call came in the heat and terror of Vietnam. I was serving in the Fifth Special Forces Group. The last guy who had held my job had just been court-martialed along with five other Green Beret officers who had allegedly crossed a few lines of their own&mdash;such as murdering a triple agent. I was the Group Intelligence Operations Officer. In many ways it was a great&#160; job. The Berets&rsquo; AO (area of operation) was essentially the entire country. I was responsible for briefing &ldquo;the old man,&rdquo; Col. &ldquo;Iron Mike&rdquo; Healy, on the enemy situation around our A-Team camps from the Delta in the south to the DMZ in the north. Very few young captains had access to the entire country as I did. Very few could grab aircraft when needed. It was heady stuff for a twenty-five-year-old from Yakima, Washington.

One of our functions was associated with flying the SLAR ships&mdash;Huey helicopters equipped with Side-Looking Airborne Radar. Used to locate enemy troop movement, they flew almost daily. Several of us officers took turns flying with them. On one of the days I was not flying, the ship went down, and one of my fellow officers was killed. When the news was confirmed at headquarters, a thick silence descended. We were all angry. Sick. Frustrated. Sorry it was him. Glad it wasn&rsquo;t us. Somehow it fell to me to collect his personal effects and prepare them for shipping home to his wife. Such a task makes a guy reflect a bit. As I was cleaning out his locker, it dawned on me that he would never see his wife again. He would never be able to tell her, &ldquo;I&rsquo;m sorry.&rdquo; For a moment, an uncomfortable thought pricked me&mdash;like the tip of a knife blade, just breaking the skin. I knew that I had been living by a &ldquo;second-chance philosophy&rdquo; of life. I had always figured, Hey, if I hurt Linda today, there&rsquo;s always tomorrow. Tomorrow I&rsquo;ll do better.

Now, for my friend, there was no tomorrow.

One little message came scrolling across the screen of my mind: Okay, Stu. It could have been you. What if it had been you?

I shook it off. That kind of stuff happened to other people. Other people&rsquo;s choppers went down. Other people died. Not me. What I was actually doing was postponing my wake-up call, pushing it away. The alarm was ringing, but I didn&rsquo;t want to hear it. I punched the snooze button and blocked it from my mind.

Some time later, however, the alarm rang again.

It started when I was in midair. I had just jumped out of an airplane with an officer from II Corps. Ranking soldiers often jump as &ldquo;wind dummies&rdquo; so the pilot can observe where they land and adjust to the winds and the DZ (drop zone). That way, the rest of the &ldquo;stick&rdquo; (other jumpers) can land where they&rsquo;re supposed to.

As I left the right side of the plane, my partner went out the left. In a freak turn of events we came together under the plane&mdash;chest to chest. Instinctively reacting to our training, we pushed away from one another, like marionettes dancing at the end of strings. We cleared, but his chute dropped below me, and I ended up on top of his canopy. Now fully deployed, his canopy was creating a vacuum that was not allowing my chute to open. As trained, I ran across his canopy and jumped, trying to clear it.

I tried it again. Still, it didn&rsquo;t work.

He landed with me on top of his canopy. It folded around me rendering my landing blind. I crashed hard but the flowing adrenaline covered the pain, and we managed to remove the chutes, hide them in the bushes, and wait for the rest of the guys. I was &ldquo;fine,&rdquo; but something felt peculiar. Something inside my chest wasn&rsquo;t right.
&#160;
For the next several weeks I was moved from the field to the dispensary to the next dispensary and finally to the hospital facilities at Cam Ranh Bay. The doctors searched for an explanation as to the damage. There had to be some kind of weakness to allow the sternum to separate as it did. The most likely reason for that weakness? A malignancy.

Sitting there in the hospital at Cam Ranh, lonely, scared, and homesick, I was forced once again to think about death. My death. In my mind&rsquo;s eye, it was closer than ever before.

As it turned out, there was no malignancy. Only one slightly damaged and very shaken trooper. I healed up and, as before, pushed away any thoughts of my own mortality and went back to duty.

One more punch on the snooze button.

It was in the spring. On a hillside. We were at Dak Pek, at the northern&#160;end of the Dak Poko Valley in the central highlands. My face was pushed into the muddy banks of a small trench at the perimeter of a Special Forces A-Camp.

Something was out there. Something big. And we knew it. All the indicators were there. We&rsquo;d been picking them up for days&mdash;more frequent &ldquo;hostile&rdquo; contact with our patrols, increased radio traffic (only &ldquo;big boys&rdquo; had such radios in the North Vietnamese Army), and a real upsurge in other tactical intelligence in the area. Even the informant &ldquo;agent nets&rdquo; began to pick&#160;up abnormal numbers of clues.

They were out there all right. And we were their target. Overrunning a Special Forces A-Camp was a prime trophy for any NVA big shot.

The wait was not pleasant. In some ways, it was almost as bad as being under attack. Just knowing that there were several companies of crack North Vietnamese regulars out there on the perimeter&mdash;waiting for the right moment to come screaming out of the forest&mdash;turned life into a waking nightmare. There in that muddy ditch, reeling from the fears and threats of imminent combat, I finally heard the wake-up call. I finally faced the real possibility that I would never go home. I finally faced up to the fact that I might not beat the odds. My life might indeed end in that faraway place. It might not be &ldquo;someone else&rdquo; leaving that valley in a body bag. It might not be &ldquo;someone else&rdquo; flying home in a silver, flag-draped coffin.

I could actually die. Within hours. Minutes. Seconds. As I grappled with those thoughts, a question burned its way to the surface of my mind. After smoldering in my soul for months, the question now burst into hot flame.

What matters? What really matters?

You Have What It Takes
John Eldredge
Booklet