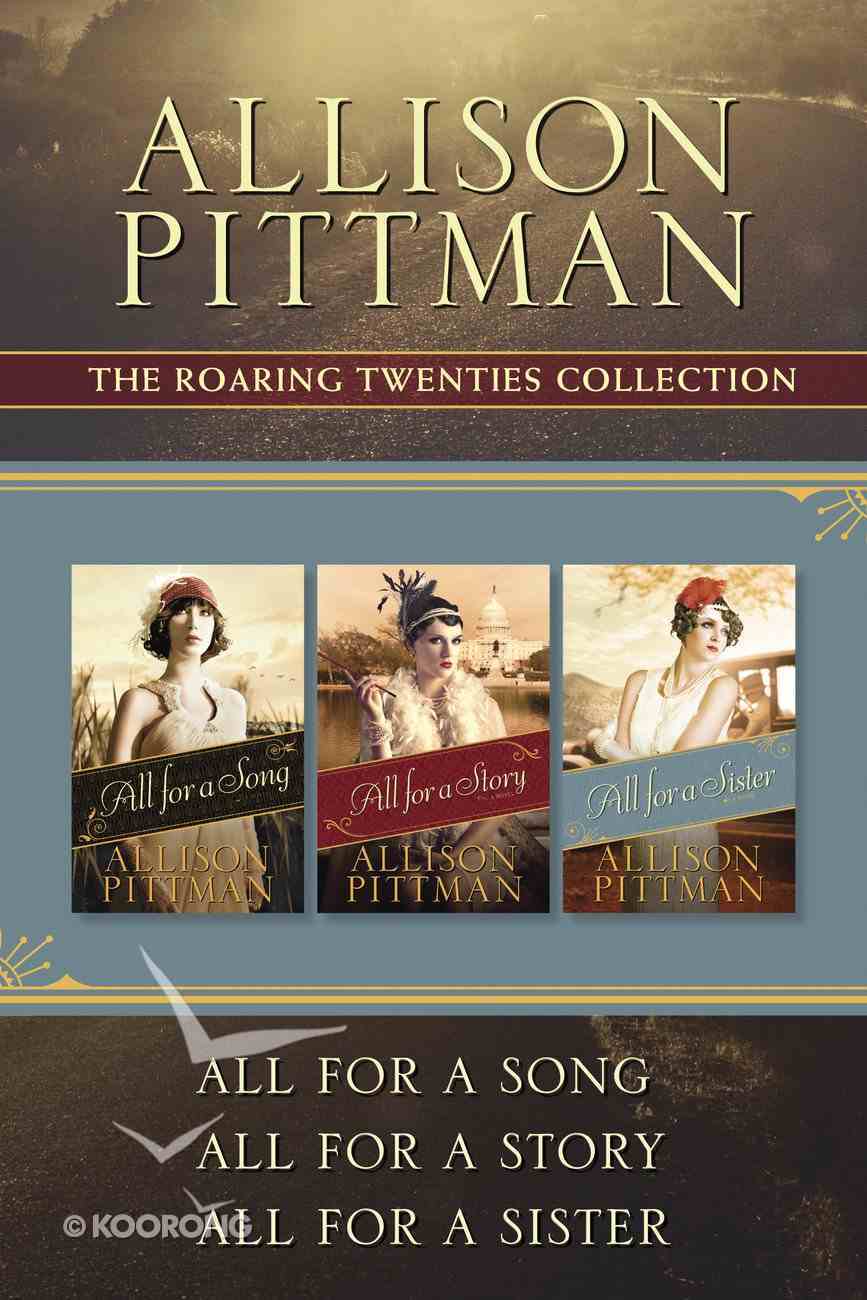 This Collection combines three of Allison Pittman's historical novels into one volume for a great value! All for a Song Dorothy Lynn Dunbar has everything she ever wanted: her family, her church, her community, and plans to marry the...

This Collection combines three of Allison Pittman's historical novels into one volume for a great value!

All for a Song
Dorothy Lynn Dunbar has everything she ever wanted: her family, her church, her community, and plans to marry the young pastor who took over her late father's pulpit. Time spent in the woods, lifting her heart and voice in worship accompanied by her brother's old guitar, makes her life complete ... and yet she longs for something more. Spending a few days in St. Louis with her sister's family, Dorothy Lynn discovers a whole new way of life-movies, music, dancing; daring fashions and fancy cars. And a dynamic charismatic evangelist ... who just happens to be a woman. When Dorothy Lynn is offered a chance to join Aimee Semple McPherson's crusade team, she finds herself confronted with temptations she never dreamed of. Can Dorothy Lynn embrace all the Roaring Twenties has to offer without losing herself in the process?

All for a Story
Monica Bisbaine loves being a modern girl in the Roaring Twenties. Her job writing a gossip column allows her access to all the local speakeasys in Washington, D.C., where she can dance the night away-and find fodder for her next article. But when the owner of the Capitol Chatter newspaper passes away, Monica wonders what will happen to her job, and the lifestyle she loves. Max Moore may hold the title of editor-in-chief for evangelist Aimee Semple McPherson's paper, The Bridal Call, but Aimee calls all the shots. So when Max learns that his great-uncle has passed away, leaving him all his earthly possessions, Max resigns and heads to D.C. Determined to take over the Capitol Chatter, infuse it with his values, and turn it into a respectable paper, Max is soon bumping up against the equally determined Monica Bisbane. Under Max's direction, Monica embarks on her most challenging assignment yet: infiltrating and reporting on the Anti-Flirt Society. Though reluctant at first, as Monica meets and mingles with the young women of the club, she begins to question the innocence of her flirtatious lifestyle. And when romance begins to blossom between Max and Monica, she must choose where her loyalties lie: with the young women of the society or the alluring pull of the speakeasy and its inhabitants.

All for a Sister
In Hollywood during the Roaring Twenties, Celeste DuFrane has it all. Her father's work with color movie film opens doors that lead to the stardom she's always aspired to. But after losing her mother, she discovers that half the estate has been left to a woman accused of killing Celeste's baby sister before Celeste was even born. Dana Lundgren arrives on the steps of the DuFrane mansion having spent most of her life imprisoned for a crime that never happened. After accusing her of murder so many years ago, why did Marguerite DuFrane leave her a sizeable inheritance? As Celeste and Dana learn each other's stories, they come up with more questions than answers. Then a surprising discovery begins to fill in the missing pieces: Marguerite DuFrane's written confession, penned shortly before her death. Uncovering the treachery and deceit that changed the course of countless lives-most of all, their own-the two women find more than they ever dreamed of.
-Publisher

Allison Pittman is the author of the three books in the popular Crossroads of Grace series. Before her life as a novelist, Allison spent sixteen years teaching high school English. A founding member and copresident of the Christian Writer's Group of the Greater San Antonio area, she devotes her time inspiring other writers to work toward their goals and sharpen their skills. Allison lives in Texas, with her husband Mike, their three sons, and Stella