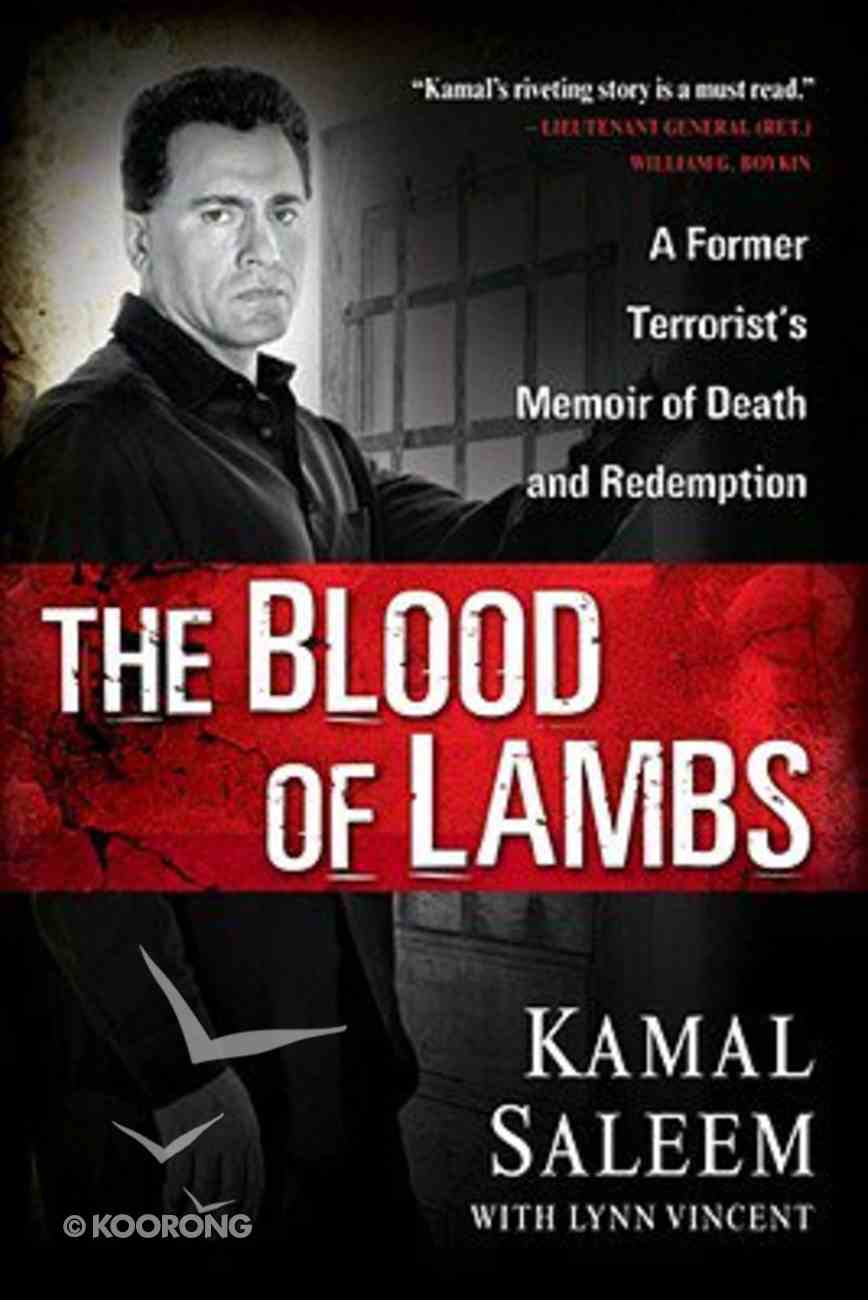 The Blood of Lambs

"The Blood of Lambs" reveals the true inside story of the making and mind-set of a Muslim terrorist. Though his ties with terrorism were severed more than twenty years ago, it was not until 9/11, when radical Muslims rained terror...

In the Presence of My Enemies
Gracia Burnham
Paperback

"The Blood of Lambs" reveals the true inside story of the making and mind-set of a Muslim terrorist. Though his ties with terrorism were severed more than twenty years ago, it was not until 9/11, when radical Muslims rained terror on American shores, that Kamal Saleem stepped out of the shadows and revealed his true identity. Today, he is a different kind of warrior. He now stands on the wall and shouts to America, "Open your eyes and fight the danger that lives among you."^As the terrible fruit of Kamal's early life in "jihad" screams from today's headlines, he courageously puts his life on the line to defend America, the country he now calls home.
-Publisher

Discussion Questions1) As a young boy at his mother's kitchen table, Kamal learned to embrace the teachings of radical Islam and hate infidels. Was there anything you learned in your childhood home that you later found to be untrue? How does knowing that some Islamists are taught their beliefs from childhood affect your view of them?2) Throughout the book, Kamal tells of the infiltration of radical Islamists into the United States. How do these revelations affect your views of your own safety here? What, if anything, will you do differently in the light of these views?3) When Kamal is beaten up three times on the way to work at his uncle's business, he takes refuge in a mosque. Later, the imams of the mosque take Kamal out into the ethnic neighborhoods to avenge him. How did you feel about these scenes? Were the imams delivering justice? Why or why not?4) What did you learn about Muslim and Lebanese culture that surprised you?5) Over the course of Kamal's childhood, financial pressures change his relationship with his father. How did you feel when Kamal's father pulled him from school and sent him to work at age 7? Are there any childhood family relationships that changed the trajectory of your life?6) At his home, duringmadrassa(Muslim religious school), Kamal learned of various teachings from the Koran and hadith. Which of these teachings were new to you? Which most surprised you and why?7) Prior to reading this book, were you aware of the number of domestic terrorist attacks thwarted by U.S. authorities since 9/11? If not, what about these plots most surprised you? Were you aware of the number of homegrown jihadists operating in the U.S., as opposed to those who have immigrated from other countries? How does that affect your view of the threat of jihadist terrorism on U.S. soil?8) How did you feel when you read the scene in which Kamal's unit of child soldiers comes under rocket attack in the Golan Heights? How did you feel when his young friend Mohammed was killed? What have you learned from this book about jihadists' use of child soldiers?9) In the Fatah/PLO terror camp at Sabra, Kamal was mentored by a radical named Abu Yousef. How do you think Kamal's life might have been different if Abu Yousef had not mentored him? Would Kamal be alive today? What does Abu Yousef's mentorship tell us about the power of male role modeling in the life of a child?10) During the story, Kamal is tracked to his hometown and also threatened via email by a group of radical Pakistanis. Were you aware that this type of activity is taking place in the U.S.? What are your thoughts on that?11) What new understanding have you gained from this book about the roots and nature of the Palestinian/Israeli conflict? How has this book affected your view of whether peace is possible in this conflict?12) During the story, Kamal travels to Libya to train terrorists from around the world in desert camps sponsored by the dictator Moammar Ghaddafi. Were you aware that such camps existed and still exist today? What are your thoughts on the existence of these "universities of terrorism?" How does it affect your thinking about Islamism to know that camps exist only to train people to kill Jews and Americans?13) Kamal's story reveals the link between Saudi Arabian money and Islamist terrorism. How has the book affected your view of our staunch U.S. ally?14) We learn from Kamal's story that "honor killing" is now taking place in the United States. Why do you think the U.S. media has placed so little emphasis on covering these crimes?15) Were you surprised to learn that the man who made a jihadist threat to Kamal after he spoke at the U.S. Air Force Academy was released back into American streets? How does that affect your view of the First Amendment and whether jihadists are using American liberties against this country?16) Clearly, Kamal Saleem has killed people and is now telling his story. Do yo
-Publisher

Kamal Saleem is now an American citizen. He has appeared on various news programs and has spoken at Stanford University, the University of California, and other institutions nationwide.Lynn Vincent is a features editor at World magazine and the collaborative writer of four books, including the New York Times bestselling and critically acclaimed memoir, Same Kind of Different as Me. She is a U.S. Navy veteran.

The Blood of Lambs: A Former Terrorist's Memoir of Death and Redemption
Kamal Saleem
Paperback