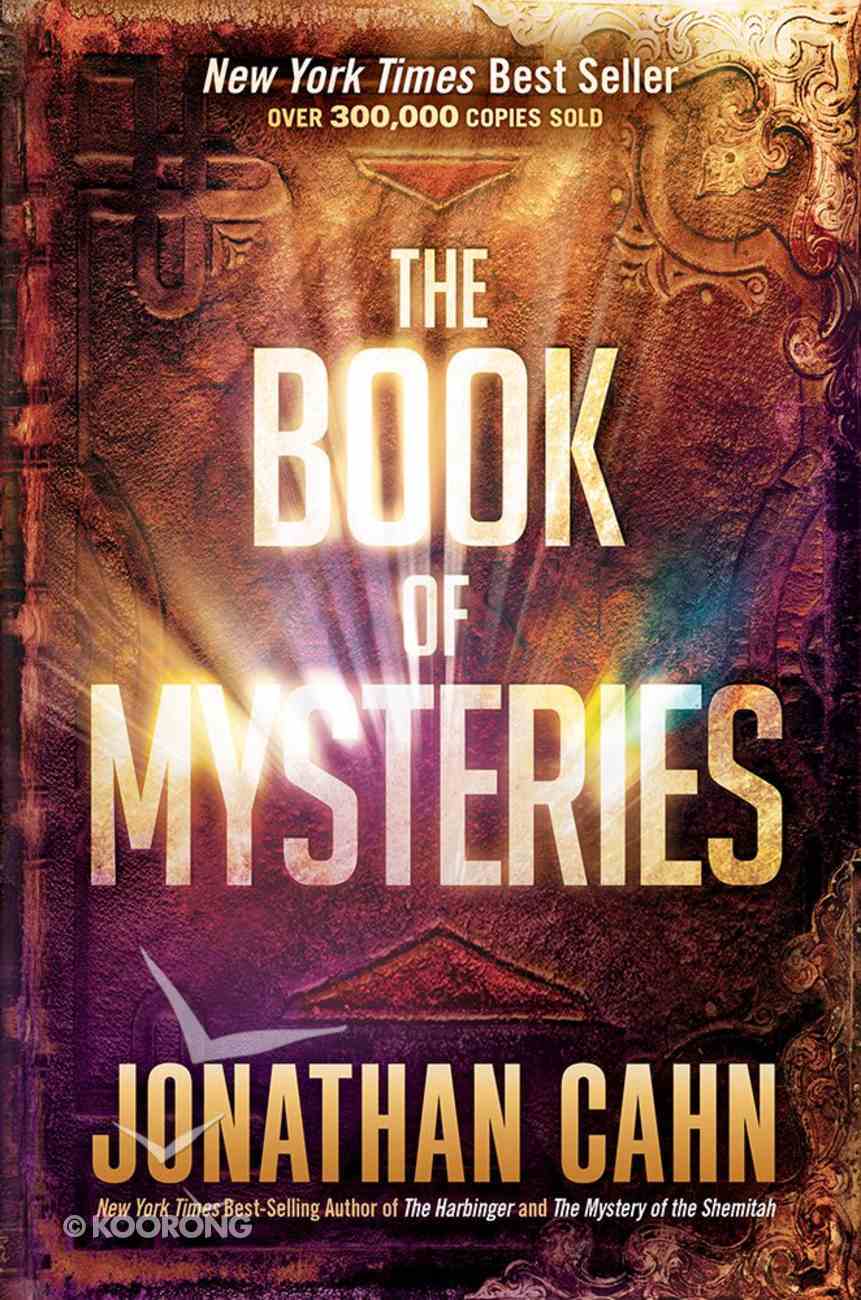 The Book of Mysteries

The Book of Mysteries is a daily devotional unlike any other, framed around the story of a traveler's encounter with a man known only as "the teacher". It takes the reader on a journey of divine revelation through ancient Scriptures,...

The Book of Mysteries is a daily devotional unlike any other, framed around the story of a traveler's encounter with a man known only as "the teacher". It takes the reader on a journey of divine revelation through ancient Scriptures, the laws of Creation, the deep of God's Word, the streams of history, and the most important keys of spiritual truth.

Imagine if you discovered a treasure chest in which were hidden ancient mysteries, revelations from heaven, secrets of the ages, the answers to man's most enduring, age-old questions, and the hidden keys that can transform your life to joy, success, and blessing...This is The Book of Mysteries.

Jonathan Cahn, who caused a national and international stir with the New York Times best-seller The Harbinger and then The Mystery of the Shemitah, now brings us a treasure chest inside of which are contained some of the greatest mysteries of all time. The reader will discover life-transforming secrets, mind-blowing realities, and heart-changing revelations in such mysteries as The Face in the Waters, The Leper King, The Land of Gezarah, The Secret of the Third Prince, The House of Spirits, The Mystery of the Rains, How to Alter Your Past, The Mystery of the Second Scroll, The Similitude, The Mystery of the Eighth Day, and much more. The Book of Mysteries takes the readers on a journey of divine revelation through ancient Scriptures, the laws of Creation, the deep of God's Word, the hidden streams of history, the most important keys of spiritual truth, end-time mysteries, and the secrets of life.

The Book of Mysteries opens up with a traveler and his encounter with a man known only as "the teacher." The teacher takes him an on odyssey through desert mountains, valleys, gardens and plains, encounters with nomadic tent dwellers, caverns and ancient ruins, chambers of scrolls and vessels, and more. The reader is taken along to partake in the journey and in all the teachings and revelations. The traveler keeps a journal in which he writes down each of the mysteries given to him by the teacher in his one-year odyssey - 365 different mysteries - one for each day of the year. Thus, on top of everything else, The Book of Mysteries is also a daily devotional unlike any other. And each mystery contains a special mission for each day of the year, a mission that takes the revelation and applies it to reality for a life-changing journey.

:
New York Times Best Seller!
1500 5-Star Reviews!
From the author that brought you NEW YORK TIMES best sellers The Harbinger, The Mystery of the Shemitah, and The Paradigm with over 3 MILLION copies sold

Enter a life-changing journey…
to uncover the MYSTERIES OF GOD, the SECRETS OF THE AGES,
and the HIDDEN KEYS to open the doors of a life of joy,
blessing, and the fulfillment of YOUR DESTINY.

As you open up The Book of Mysteries, you will be transported on a journey through a desert to encounter a man known only as "the teacher," who will take you on an odyssey to mountaintops,
caverns, encampments of tent dwellers, and oil-lit chambers of scrolls, ancient books, and mysterious vessels.

Each day a new mystery will be revealed, including: The Mystery of the Eighth Day, The Maccabean Blueprint, The Chiasma, The Seven Mysteries of the Age, and much more… even the mystery of your life!

Partake in the voyage and unlock the treasure chest to uncover the mysteries of the ages. And with 365 mysteries, one for each day of the journey-and of the year, The Book of Mysteries is also a daily devotional unlike any other-with things never before revealed, the most important keys of spiritual truth, end-time revelation, and the secrets of overcoming…
It can even change your life!

Life: An Obsessively Grateful, Undone By Jesus, Genuinely Happy, and Not Faking It Through the Hard Stuff Kind of Devotional
Lisa Harper
Hardback