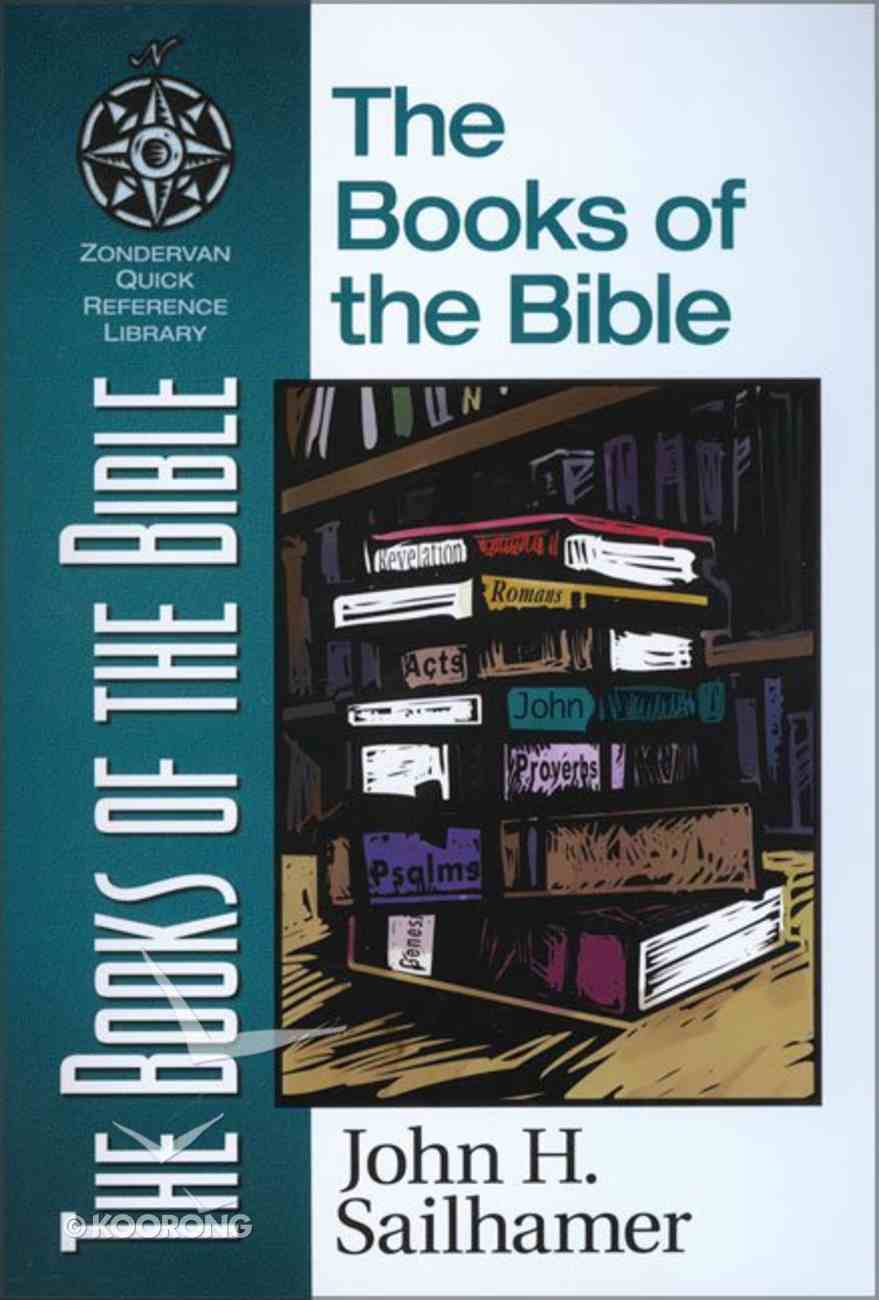 The Books of the Bible (Zondervan Quick Reference Library Series)

The Books of the Bible gives you an introduction to the Bible and essential grasp of - The 39 Old Testament Books - The 27 New Testament Books -- Turn here for exactly the kind of informative, easy-to-read overviews you're looking for. From theology, to biblical archaeology, to the life of Christ and more, each volume covers a topic of vital interest to Christians in handy, one-page bits of information. The Zondervan Quick-Reference Library is knowledgeable, fascinating, and helpful. It cuts time and hassle by taking you straight to the heart of the things you most want to know about Christianity -- one minute at a time.
-Publisher

Genesis The book of Genesis is the introduction to the Torah and the rest of the Bible. It introduces and develops the central characters and themes of the Bible story. The main characters are God, humankind, and the chosen people, Israel; the main themes are human failure, divine grace, and hope. The narrative begins with God's creation of the world, including his special creation of human beings and his preparation of the land that he wished to give to his people, Israel (Gen. 1). This was a good land, and those whom he created to dwell in and enjoy this land were put there to worship and obey him (ch. 2). Foolishly, the first man and his wife turned away from God, their Creator, and sought to find another way to life and prosperity (ch. 3). That way ended in divine judgment and death: the first couple was expelled from the garden God had made for them (ch. 3); their first child was a murderer (ch. 4); the first civilization was destroyed by a flood (chs. 6--9); and the first great city, Babylon, humankind's only hope apart from God, was abandoned in ruins (ch. 11). In the midst of that divine judgment, however, came the promise of grace and redemption. God's promise of a redeemer who would crush the head of the serpent (Gen. 3:15) strikes an early note of hope. This hope reverberates throughout the subsequent chapters of Genesis and finds its full exposition in the last words of Jacob: a mighty conqueror would arise from the house of Judah and establish God's rule over all the nations (49:8--12). The lineage of that promised redeemer is traced from Eve to the family of Noah (ch. 5), to Shem (ch. 10), to Abraham (chs. 11--25), to Isaac (ch. 26), and to Jacob (chs. 27-- 50), finding its ultimate fulfillment in that mighty king from the house of Judah. When the nations were dispersed from the city of Babylon (Gen. 11), God chose Abraham and brought him back to the land prepared in creation and gave it to him and his descendants. From among those descendants, God promised to provide blessing for all humanity. Abraham would become a great nation, God would bless that nation, and through it all the nations of the earth would be blessed (12:2--3). The Genesis narratives go to great lengths to show that God alone would ultimately fulfill his promise. God's people continually fell short of his call. Looking to their own strength, like Adam and Eve they often sought to find a way apart from God. However, God was patient. He continually watched over their weaknesses and provided the right help at just the right time. Isaac was born in his mother's old age when there was no longer hope for a son. Jacob obtained his older brother's birthright and blessing by God's grace--- even before his birth and in spite of his many later attempts to rob and steal them from his brother. Through God's providential care, during a time of severe famine, Judah and his brothers were brought safely to Egypt---in spite of their attempts to kill their brother and savior, Joseph. Exodus The book of Exodus opens four hundred years after the close of Gene-sis (cf. Gen. 15:13), with the people of Israel, heirs of God's promise of redemption, suffering under cruel oppression in Egypt (Ex. 1). Their anguished cries, however, did not go unheeded. The Lord remembered his promise to their ancestors and raised up a deliverer, Moses, to bring them back to the land he had prepared for them (chs. 2--4). In keeping with God's plan, Israel's deliverance became an occasion to make himself known to the nations. God thus displayed his power before the Egyptians through ten 'signs' performed through his servant Moses (chs. 5--11). Their rivers were turned to blood, their land was infested with swarms and pestilence---not to afflict divine wrath on this nation, but to reveal God's glory (7:5). This was the same God who desired the salvation and blessing of all the nations (Gen. 12:3). The sacrifice of the Passover lamb, with its blood applied to the doorpost (Ex. 12-- 13), and the Israelites' baptism in the Red Sea (chs. 14--15; cf. 1 Cor. 10:2) pointed to how God would one day accomplish that salvation in Christ. God had further plans for his people. He wanted to restore to them the fellowship he desired with all human beings, created in his image. He thus entered into a covenant with Israel at Mount Sinai (Ex. 16--19). That covenant called for obedience to God's will and personal holiness. God desired that his people come to him as persons, willing to have personal fellowship with him. Thus all forms of idolatry were strictly forbidden. Instructions, sometimes extending to minute detail, were given so that there be no misunderstanding what God's will was (chs. 20--24). Most of all, the covenant entailed the worship of the one and only true God. Though the Israelites agreed to follow God's will and obey the covenant, they quickly forsook the Lord and made for themselves an idol, a golden calf (Ex. 32). This meant a total departure from the kind of relationship God had intended for them. The covenant thus came to an abrupt halt. Moses shattered the stone tablets of the covenant, and the people were severely punished. Only the grace of God (34:6--7) ensured a renewed covenant and continued fellowship between God and his people. Because of Israel's disobedience, God gave them even more laws and became more specific in the kinds of obedience he required. But God continued to live among his people, even instructing them in detail on the kind of 'house' he was to have among them. That house, or tent, was called the tabernacle. This structure they built in the desert, following the plan God laid out (chs. 25--40). Since the plan was a copy of God's dwelling in heaven, the tabernacle served to bring heaven to earth. Such a condescension on God's part to live among an unholy people necessitated stringent measures to protect his holiness (see Leviticus).