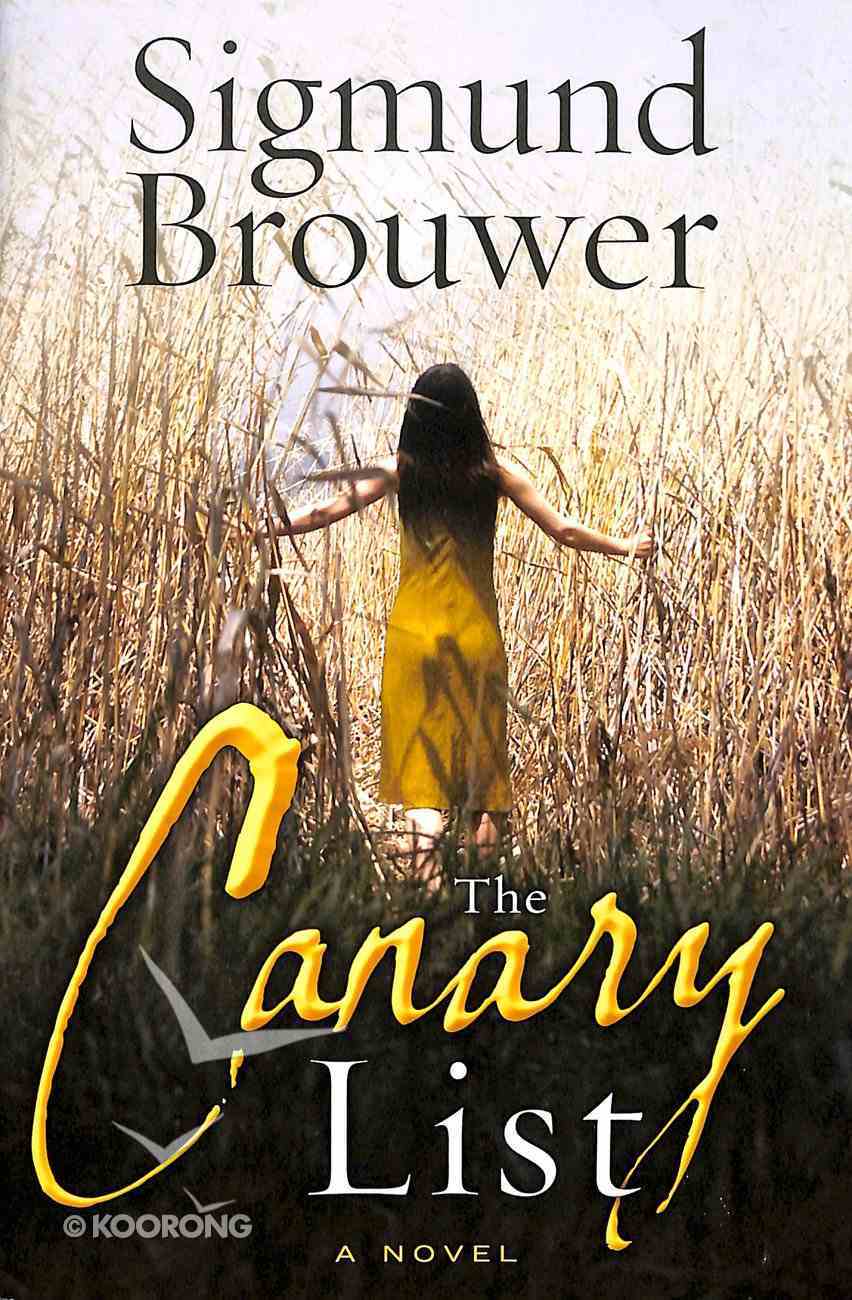 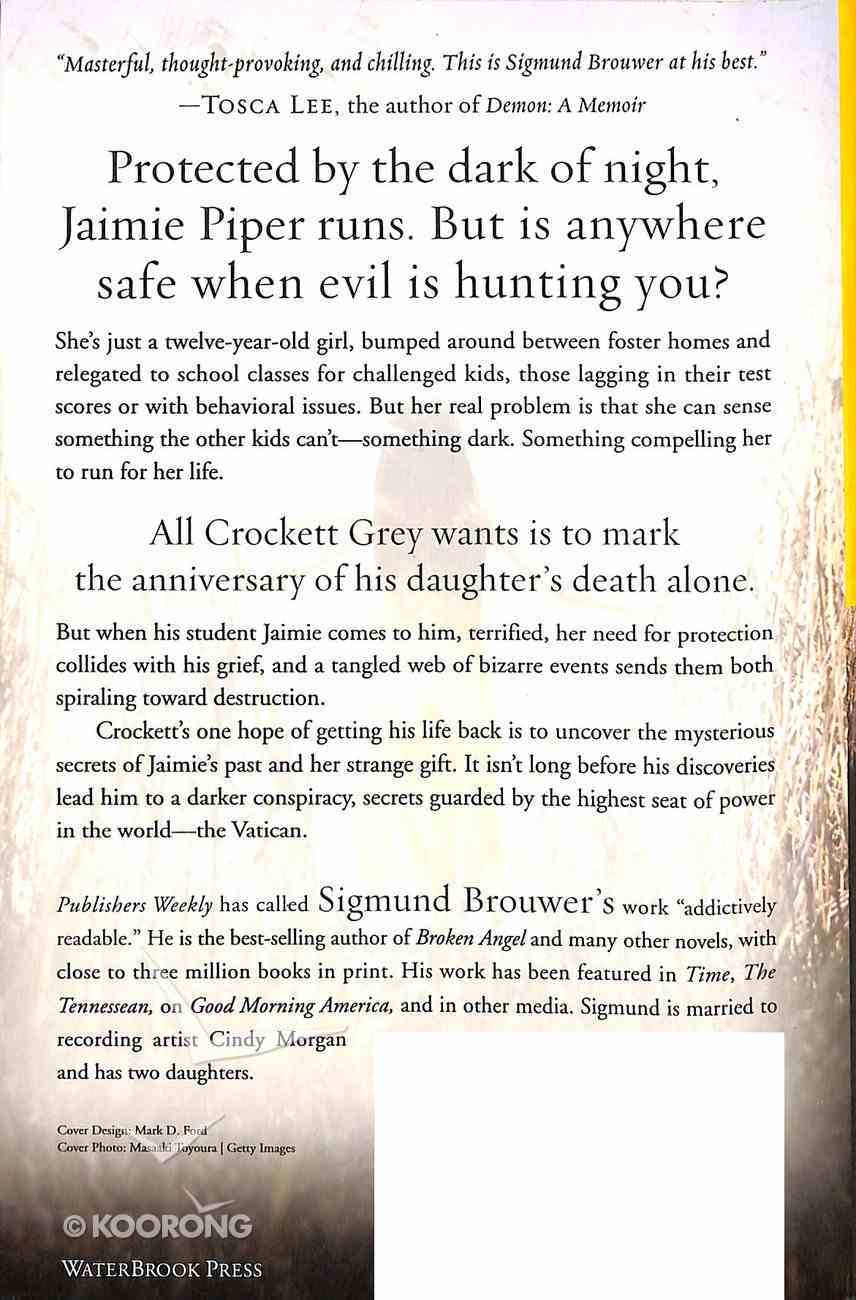 Protected by the dark of night, Jaimie Piper runs. But is anywhere safe when Evil is hunting you? Her teacher, Crockett Grey wants to mark the anniversary of his daughter's death-- alone. A tangled web of bizarre events sends them...

Protected by the dark of night, Jaimie Piper runs. But is anywhere safe when Evil is hunting you? Her teacher, Crockett Grey wants to mark the anniversary of his daughter's death-- alone. A tangled web of bizarre events sends them both spiraling toward destruction, and to a dark conspiracy of secrets guarded by the highest seat of power in the world-- the Vatican.
-Publisher

Protected by the dark of night, Jaimie Piper runs. But is anywhere safe when Evil is hunting you?

She’s just a twelve year-old girl, bumped around between foster homes and relegated to school classes for challenged kids, those lagging in their test scores or with behavioral issues. But her real problem is that she can sense something the other kids can’t—something dark. Something compelling her to run for her life.

All Crockett Grey wants is to mark the anniversary of his daughter’s death alone.

But when his student Jaimie comes to him, terrified, her need for protection collides with his grief, and a tangled web of bizarre events sends them both spiraling toward destruction.

Crockett’s one hope of getting his life back is to uncover the mysterious secrets of Jaimie’s past and her strange gift. It isn’t long before his discoveries lead him to a darker conspiracy, secrets guarded by the highest seat of power in the world—the Vatican.
-Publisher

It had driven her toward the beach, where, protected by the dark of night, Jaimie Piper crept toward the front window of a small bungalow a few blocks off the ocean in Santa Monica.

She knew it was wrong, sneaking up on her schoolteacher like this, but she couldn’t help herself. She was afraid—really afraid—and she wanted his help. First she had to make sure he was alone. If he was with someone else, she wouldn’t bother him.

The sound of night bugs was louder than the traffic on the main boulevard that intersected this quiet street. It was June, and the air was warm and had the tangy smell of ocean. The grass was cool and wet. She felt the dew soaking through her canvas high-top Converse sneakers. Jaimie wasn’t one to worry about fashion. She just liked the way the sneakers felt and looked. Okay, maybe she liked them too because none of the other kids her age wore them. Jaimie was twelve. Slender and tall, she had long, fine hair that she tended to wear in a ponytail with a ball cap. If she let it hang loose, it softened her appearance to the point where others viewed her as girlie, something she hated.

The alternative was to cut it herself, because her foster parents didn’t like wasting money by sending her to a beauty salon, but cutting it herself would just remind her that she was nothing but a foster kid, so she just let it grow. And
wore Converse sneakers that looked anything but girlie.

Not only was it wrong to be sneaking up on her teacher’s house, but it was wrong even to know where he lived. Jaimie knew that. But his wallet had been open on his desk once, with his driver’s license showing behind a clear plastic window, and she’d read it upside down while she was talking to him and had memorized his address.

Although this was the first time she’d stopped, she had ridden her bike past his house plenty of times, wondering what it would be like if she lived in the little house near the beach.

It wasn’t the house that drew her. It was dreaming about what it would be like to have a family, and it seemed the perfect house for a family with a mom and a dad and a couple of girls.

A real family. A house that they had lived in for years and years, with a yard and a couple of dogs. Beagles. She loved beagles.

Her mom would be a little pudgy but someone who laughed all the time. Jaimie didn’t like the moms she saw who were cool and hip and trying to outdo their daughters in skinniness and tight-fitting jeans.

Her dad would not have perfect hair and drive a BMW. Jaimie didn’t have friends, because Jaimie wasn’t a friend kind of person, but she knew girls at school with dads like that, and those girls didn’t seem happy. If Jaimie had a dad, he’d be the kind of guy who went to barbers, not stylists, and had hair that was always a couple of weeks past needing a barber, who wore jeans and didn’t tuck in his shirt and always dropped everything to listen to whatever story his girl wanted to tell him.

A dad like Mr. G, her teacher. He drove an old Jeep, the kind with canvas top and roll bars. Sometimes she’d see a surfboard strapped to the top of it, canvas top gone. Mr. G had that kind of surfer-dude look, with the long hair and a long nose bent a little. Not perfect kind of handsome, but a face you still looked at twice. Some of the girls in her class had a crush on him.

She just wished she could have a dad like him and a house like the house he lived in. Sometimes when she was really lonely, she would ride her bike in the neighborhood, pretending it was her home and that when she got there, she’d be able to wheel up the sidewalk and drop her bike on the grass and leave it there, because if it really was her family, no one would get upset about little things like that.

It wasn’t that she just had a good feeling about him. It was that Jaimie knew Mr. G could be trusted. Jaimie had a sense about people, a sense that sometimes haunted her.

Like earlier tonight, when she’d met a guy who had come to her house to talk to her foster parents. She’d watched his eyes as he checked the layout of the house, standing in the kitchen, saying that he was from Social Services. She had taken her bracelet off to hand wash some dishes, and without it on her wrist, she’d felt the Evil that radiated from him. Evil that hunted her.

So while the man with Evil was talking to her foster parents, she’d grabbed her bracelet and snuck out of the house and jumped on her bike. Dusk was just turning black when she began the twenty-minute ride from the large old house
toward the ocean, where she often snuck at night anyway to walk the beach. But the feeling of Evil was still so real she couldn’t shake it. She wanted—no, needed—to talk to someone about it. Wanted—no, needed—to feel safe. Somehow.

The one person who had promised to help wasn’t answering her phone. That only left Mr. G. The only other person in the world she could trust. She made it to the side of the window at his house. She inched her head up to peek through the glass.

She saw a single candle.

And Mr. G on the couch. Holding a big book open in his lap.

She watched, knowing she shouldn’t watch.

It looked like he was talking to the book.

And then he glanced up, and for that split second, it seemed like he was staring right into her eyes.