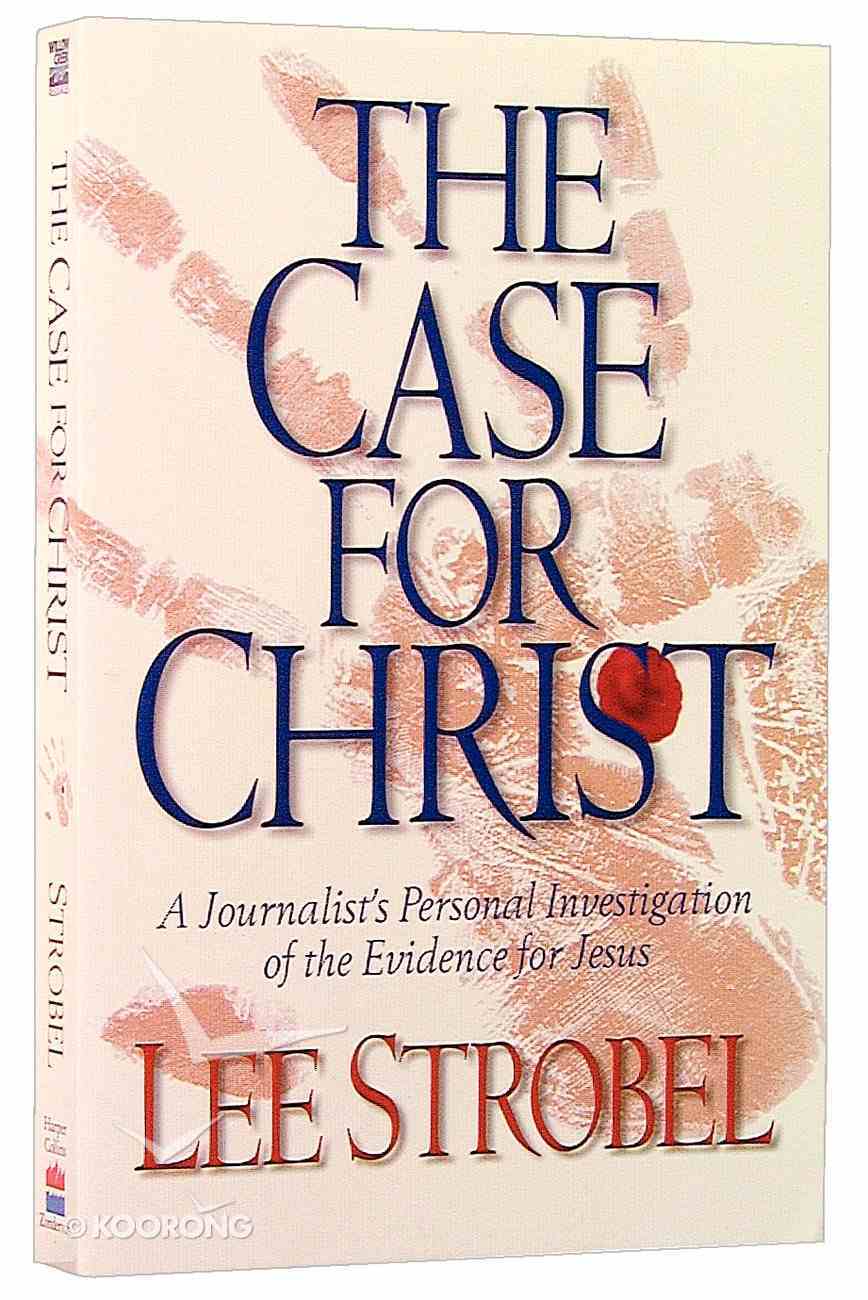 The Case For Christ

Join award-winning reporter Lee Strobel as he explores the life of Jesus. Interviewing thirteen top Christian scholars, he establishes solid historical, scientific, and psychiatric evidence to support the claims of Christ. He offers a unique approach to apologetics. 336 pages,...

Join award-winning reporter Lee Strobel as he explores the life of Jesus. Interviewing thirteen top Christian scholars, he establishes solid historical, scientific, and psychiatric evidence to support the claims of Christ. He offers a unique approach to apologetics. 336 pages, from Zondervan.

A Seasoned Journalist Chases Down the Biggest Story in HistoryIs there credible evidence that Jesus of Nazareth really is the Son of God?Retracing his own spiritual journey from atheism to faith, Lee Strobel, former legal editor of the Chicago Tribune, cross-examines a dozen experts with doctorates from schools like Cambridge, Princeton, and Brandeis who are recognized authorities in their own fields.Strobel challenges them with questions like How reliable is the New Testament? Does evidence for Jesus exist outside the Bible? Is there any reason to believe the resurrection was an actual event?Strobel's tough, point-blank questions make this Gold Medallion-winning book read like a captivating, fast-paced novel. But it's not fiction. It's a riveting quest for the truth about history's most compelling figure.What will your verdict be in The Case for Christ?"Lee Strobel probes with bulldog-like tenacity the evidence for the truth of biblical Christianity."Bruce M. Metzger, Ph.D., Professo
-Publisher

1999 GOLD MEDALLION WINNERA seasoned journalist chases down the biggest story in history. The Project: Determine if there's credible evidence that Jesus of Nazareth really is the Son of God. The Reporter: Lee Strobel, educated at Yale Law School, award-winning former legal editor of the Chicago Tribune -- with a background of atheism. The Experts: A dozen scholars, with doctorates from Cambridge, Princeton, Brandeis, and other top-flight institutions, who are recognized authorities on Jesus. The Story: Retracing his own spiritual journey, Strobel cross-examines the experts with tough, point-blank questions: How reliable is the New Testament? Does evidence exist for Jesus outside the Bible? Is there any reason to believe the resurrection was an actual historical event? . . . This audio adaptation of Lee Strobel's remarkable Gold Medallion Award-winning book packs the energy of a captivating, fast-paced novel. But it's not fiction. It's a riveting quest for the truth about history's most compelling figure. What will your verdict be in The Case for Christ?
-Publisher

CHAPTER 12 The Evidence of the Missing Body Candy heiress Helen Vorhees Brach flew into the world's busiest airport on a crisp autumn afternoon, stepped into a crowd, and promptly disappeared without a trace. For more than twenty years the mystery of what happened to this red-haired, animal-loving philanthropist has baffled police and journalists alike. While investigators are convinced she was murdered, they haven't been able to determine the specific circumstances, largely because they've never found her body. Police have floated some speculation, leaked tantalizing possibilities to the press, and even got a judge to declare that a con man was responsible for her disappearance. But absent a corpse, her murder officially remains unsolved. Nobody has ever been charged with her slaying. The Brach case is one of those frustrating enigmas that keep me awake from time to time as I mentally sift through the sparse evidence and try to piece together what happened. Ultimately it's an unsatisfying exercise; I want to know what happened, and there just aren't enough facts to chase away the conjecture. Occasionally bodies turn up missing in pulp fiction and real life, but rarely do you encounter an empty tomb. Unlike the case of Helen Brach, the issue with Jesus isn't that he was nowhere to be seen. It's that he was seen, alive; he was seen, dead; and he was seen, alive once more. If we believe the gospel accounts, this isn't a matter of a missing body. No, it's a matter of Jesus still being alive, even to this day, even after publicly succumbing to the horrors of crucifixion so graphically depicted in the preceding chapter. The empty tomb, as an enduring symbol of the Resurrection, is the ultimate representation of Jesus' claim to being God. The apostle Paul said in 1 Corinthians 15:17 that the Resurrection is the very linchpin of the Christian faith: 'If Christ has not been raised, your faith is futile; you are still in your sins.' Theologian Gerald O'Collins put it this way: 'In a profound sense, Christianity without the resurrection is not simply Christianity without its final chapter. It is not Christianity at all.'1 The Resurrection is the supreme vindication of Jesus' divine identity and his inspired teaching. It's the proof of his triumph over sin and death. It's the foreshadowing of the resurrection of his followers. It's the basis of Christian hope. It's the miracle of all miracles. If it's true. Skeptics claim that what happened to Jesus' body is still a mystery akin to Helen Brach's disappearance - there's not enough evidence, they say, to reach a firm conclusion. But others assert that the case is effectively closed, because there is conclusive proof that the tomb was vacant on that first Easter Morning. And if you want someone to compellingly present that case, your best bet is to visit with William Lane Craig, widely considered to be among the world's foremost experts on the Resurrection. The Eleventh Interview: William Lane Craig, Ph.D., D.Th. I had an unusual perspective the first time I saw Bill Craig in action: I was seated behind him as he defended Christianity before a crowd of nearly eight thousand people, with countless others listening on more than one hundred radio stations across the country. As moderator of a debate between Craig and an atheist selected by the national spokesman for American Atheists, Inc., I marveled as Craig politely but powerfully built the case for Christianity while simultaneously dismantling the arguments for atheism. From where I was sitting, I could watch the faces of people as they discovered - many for the first time - that Christianity can stand up to rational analysis and rugged scrutiny. In the end it was no contest. Among those who had entered the auditorium that evening as avowed atheists, agnostics, or skeptics, an overwhelming 82 percent walked out concluding that the case for Christianity had been the most compelling. Forty-seven people entered as nonbelievers and exited as Christians - Craig's arguments for the faith were that persuasive, especially compared with the paucity of evidence for atheism. Incidentally, nobody became an atheist.2 So when I flew down to Atlanta to interview him for this book, I was anxious to see how he'd respond to the challenges concerning the empty tomb of Jesus. He hadn't changed since I had seen him a few years earlier. With his close-cropped black beard, angular features, and riveting gaze, Craig still looks the role of a serious scholar. He speaks in cogent sentences, never losing his train of thought, always working through an answer methodically, point by point, fact by fact. Yet he isn't a dry theologian. Craig has a refreshing enthusiasm for his work. His pale blue eyes dance as he weaves elaborate propositions and theories; he punctuates his sentences with hand gestures that beckon for understanding and agreement; his voice modulates from near giddiness over some arcane theological point that he finds fascinating to hushed sincerity as he ponders why some scholars resist the evidence that he finds so compelling. In short, his mind is fully engaged, but so is his heart. When he talks about skeptics he has debated, it isn't with a smug or adversarial tone. He goes out of his way to mention their endearing qualities when he can - this one was a wonderful speaker, that one was charming over dinner. In the subtleties of our conversation, I sensed that he isn't out to pummel opponents with his arguments; he's sincerely seeking to win over people who he believes matter to God. He seems genuinely perplexed why some people cannot, or will not, recognize the reality of the empty tomb.