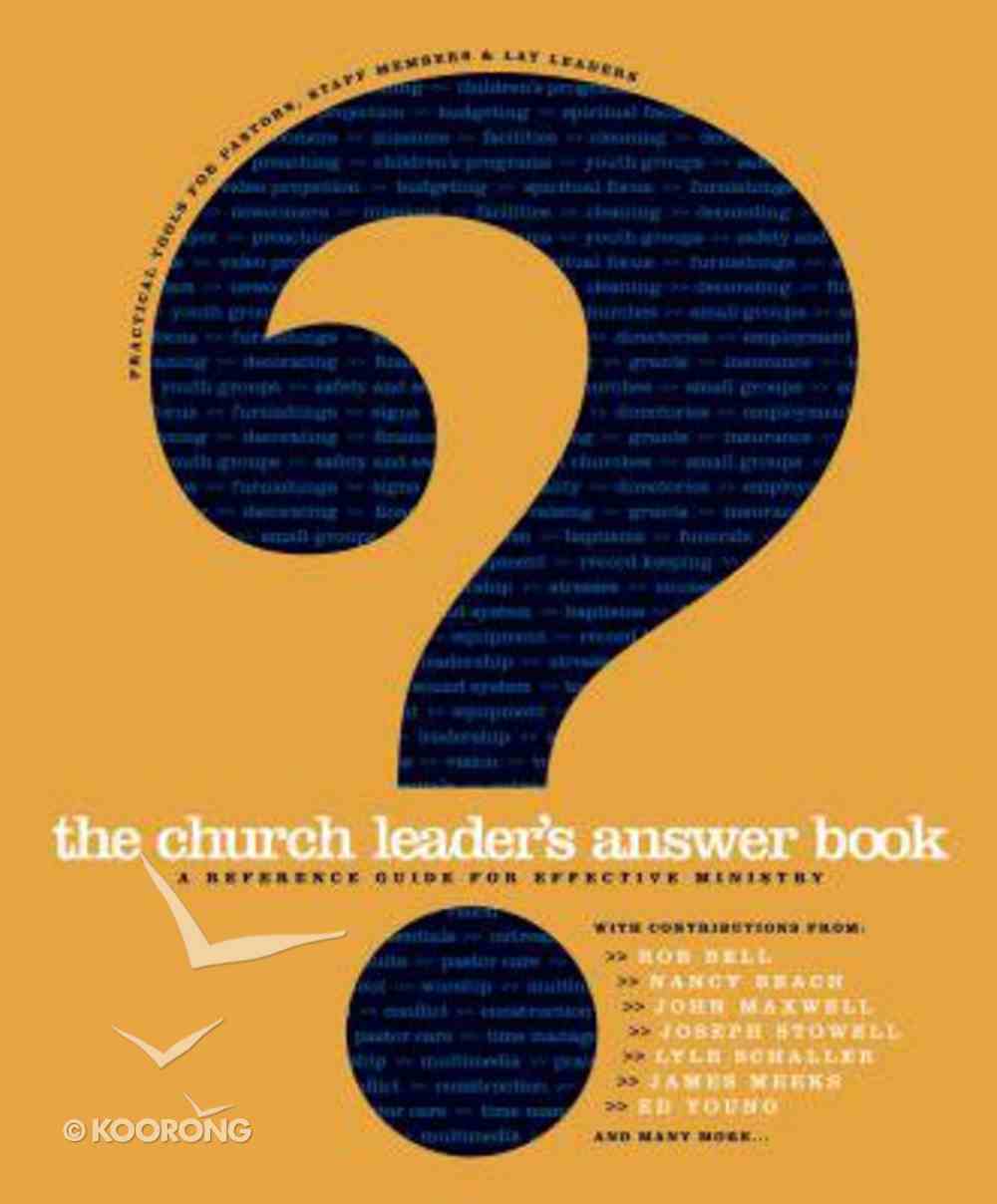 Loaded with tips, guidelines, and proven wisdom from America's most effective church leaders, The Church Leader's Answer Book is an informative, one-stop reference guide. It offers battle-tested advice on nearly every topic imaginable, from church furnishings to staff meetings. The...

The Family Life of a Christian Leader
Ajith Fernando
Paperback

Loaded with tips, guidelines, and proven wisdom from America's most effective church leaders, The Church Leader's Answer Book is an informative, one-stop reference guide. It offers battle-tested advice on nearly every topic imaginable, from church furnishings to staff meetings. The Church Leader's Answer Book will equip and empower pastors, staff, and volunteeer church leaders to efficiently handle all the important day-to-day issues and free them to devote more time to the heart of their ministry. Includes sidebars, callouts, charts, and graphs; case studies and checkups for ministry assessment; interviews with experienced and successful church leaders; and an extensive resource list.
-Publisher

Nancy Beach is executive vice president of programming and production for the Willow Creek Association and a teaching pastor at Willow Creek Community Church. A champion for the arts and artists in the church, she is the author of An Hour on Sunday: Creating Moments of Transformation and Wonder. Nancy holds a master's degree in communication from Wheaton College. She lives in Barrington, Illinois, with her husband, Warren, and her two daughters, Samantha and Johanna. SPANISH BIO: Nancy Beach es vicepresidenta ejecutiva de artes escenicas en la Asociacion Willow Creek y pastora a cargo de la en

Schaller is the most widely read and respected writer on congregational life today.

Joe Stowell serves as the 11th President of Cornerstone University in Grand Rapids, Michigan. Comprised of approximately 2500 undergraduate and graduate students, Cornerstone is a Christ - centered university with a passion for global influence through the transforming power of the gospel. The University is committed to creating an environment where students thrive both spiritually and intellectually as they prepare themselves to influence our world as followers of Jesus.
An internationally recognized conference speaker, Joe has also written numerous books including The Trouble with Jesus; Simply Jesus and You; The Upside of Down; and Eternity. Joe also serves with RBC Ministries, partnering in media productions, writing, and outreach to pastors. His Strength for the Journey web ministry, www.getmorestrength.org, features daily devotionals, weekly messages and commentary, downloadable Bible study curriculum, and an audio library of his most requested messages.


Joe serves on the Board of the Billy Graham Evangelistic Association and Wheaton College, and has a distinguished career in higher education and church leadership. From 1987–2005, he served as the president of Moody Bible Institute, and as teaching pastor at the 10,000–member Harvest Bible Chapel in suburban Chicago

Ed Young is the senior pastor of Fellowship Church, with four campuses in the Dallas/Fort Worth area and one in Miami, Florida. Ed Young Ministries is aired on television networks worldwide including USA, TBN, Daystar and CNBC Europe. Ed is a frequent conference speaker, particularly through Creative Church Conferences (C3). Find more on EdYoung.com.

Robert Holmes "Rob" Bell Jr. was born on August 23, 1970. Bell grew up in a traditional Christian environment. He attended Wheaton College. While at Wheaton, he roomed with Ian Eskelin of All Star United. With friends Dave Houk, Brian Erickson, Steve Huber and Chris Fall, he formed the indie rock band, "ton bundle". Bell received his bachelor's degree in 1992 from Wheaton and taught water skiing in the summers at Wheaton College's Honey Rock Camp. During this time, Bell offered to teach a Christian message to the camp counselors after no pastor could be found. He taught a message about "rest". He said that God led him to teaching at this moment. Bell moved to Pasadena, California to pursue this calling for teaching and received a M.Div. from Fuller Theological Seminary. According to Bell, he never received good grades in preaching class because he always tried innovative ways to communicate his ideas. During his time at Fuller he was a youth intern at Lake Avenue Church. He did, however, occasionally attend Christian Assembly in Eagle Rock, California, which led to him and his wife asking questions in the direction of how a new style of church would appear. Bell and his wife moved from California to Grand Rapids to be close to family and on invitation to study under pastor Ed Dobson. He handled many of the preaching duties for the Saturday Night service at Calvary Church. Bell announced that he would be branching out on his own to start a new kind of community and he would call it "Mars Hill" after the Greek site where the apostle Paul told a group, "For as I walked around and looked carefully at your objects of worship, I even found an altar with this inscription: TO AN UNKNOWN GOD. Now what you worship as something unknown I am going to proclaim to you." In February 1999, Bell founded Mars Hill Bible Church, with the church originally meeting in a school gym in Wyoming, Michigan. As of 2005, an estimated 11,000 people attend the two "gatherings" on Sundays at 9 and 11 AM.[7] As of March 2011, Sunday attendance numbers between 8,000 and 10,000.[8] His teachings at Mars Hill inspired the popular "Love Wins" bumper sticker, and the congregation freely distributes these stickers after services.

Leading on Empty: Refilling Your Tank and Renewing Your Passion
Wayne Cordeiro
Paperback

On Being a Servant of God
Warren W Wiersbe
Paperback