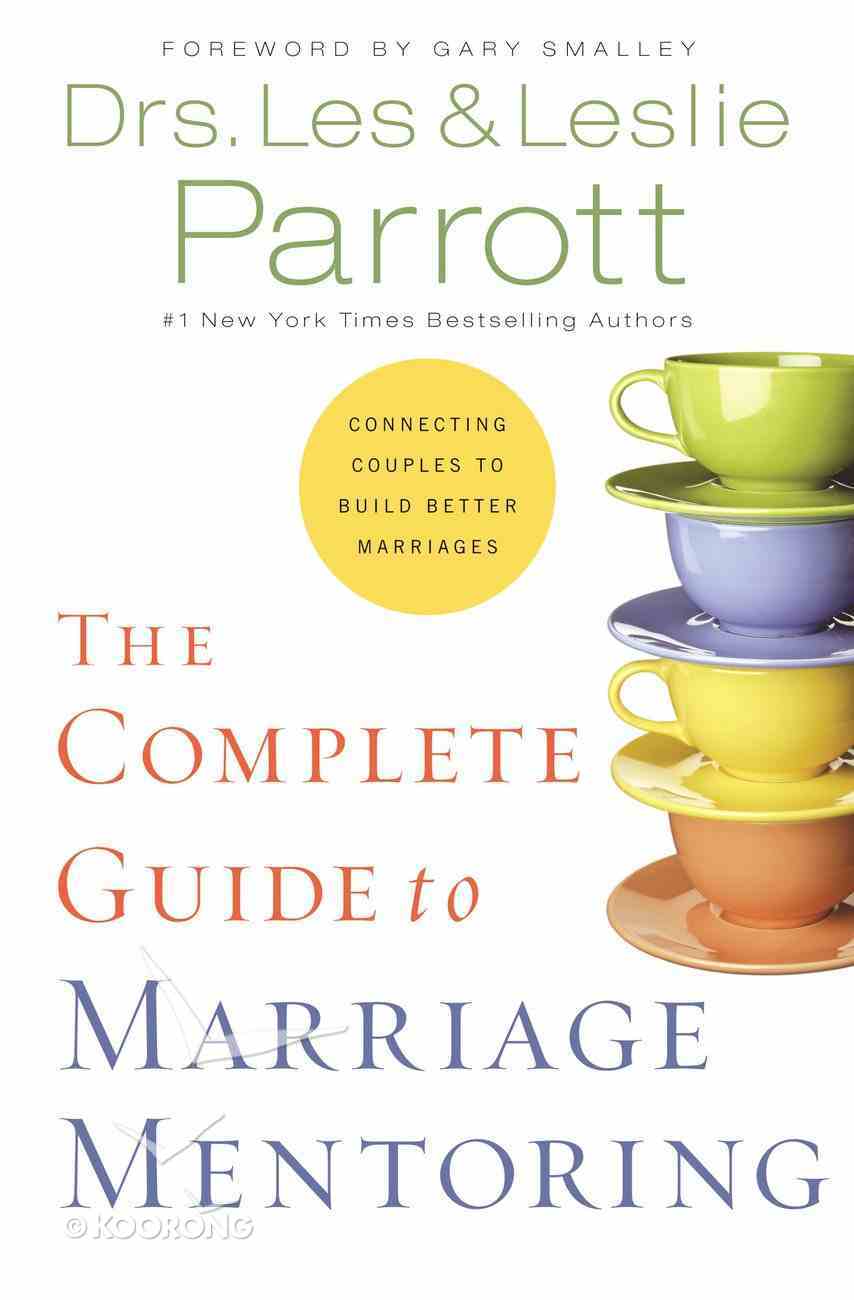 The Complete Guide to Marriage Mentoring

A comprehensive resource to help churches build a thriving marriage mentoring program Les and Leslie Parrott are passionate about how marriage mentoring can transform couples, families, and entire congregations. The Complete Guide to Marriage Mentoringincludes life-changing insights and essential skills...

Your Time-Starved Marriage: How to Stay Connected At the Speed of Life
Les Parrott, Leslie Parrott
Paperback

Your Time-Starved Marriage: How to Stay Connected At the Speed of Life (Workbook For Men)
Les Parrott, Leslie Parrott
Paperback

Your Time-Starved Marriage: How to Stay Connected At the Speed of Life (Workbook For Women)
Les Parrott, Leslie Parrott
Paperback

The Complete Guide to Marriage MentoringCopyright 2005 by The Foundation for Healthy RelationshipsRequests for information should be addressed to:Zondervan, Grand Rapids, Michigan 49530Library of Congress Cataloging-in-Publication DataParrott, Les. The complete guide to marriage mentoring : connecting couples to build better marriages / Les and Leslie Parrott ; foreword by Gary Smalley. - 1st ed. p. cm. Includes bibliographical references and index. ISBN-13: 978-0-310-27046-1 ISBN-10: 0-310-27046-4 1. Church work with married people. 2. Mentoring in church work. I. Parrott, Leslie L., 1964 - II. Title. BV4012.27.P36 2005259''.14 - dc22 2005020701This edition printed on acid-free paper.All Scripture quotations, unless otherwise indicated, are taken from the Holy Bible: New International Version. NIV. Copyright 1973, 1978, 1984 by International Bible Society. Used by permission of Zondervan. All rights reserved.Scripture quotations marked LB are taken from The Living Bible. Copyright 1971 by Tyndale House Publishers, Inc., Wheaton, Illinois. All rights reserved.Some anecdotes in this book are composites of real situations, but names, facts, and issues have been changed to protect confidentiality.The website addresses recommended throughout this book are offered as a resource to you. These websites are not intended in any way to be or imply an endorsement on the part of Zondervan, nor do we vouch for their content for the life of this book.All rights reserved. No part of this publication may be reproduced, stored in a retrieval system, or transmitted in any form or by any means - electronic, mechanical, photocopy, recording, or any other - except for brief quotations in printed reviews, without the prior permission of the publisher.Published in association with Yates & Yates, LLP, Attorneys and Counselors, Suite 1000, Literary Agent, Orange, CA.Interior design by Beth ShagenePrinted in the United States of AmericaPART ONEThe BIG PICTURE on MARRIAGE MENTORINGWisdom, like an inheritance, is a good thing.ECCLESIASTES 7:11Can you imagine giving an inheritance to another couple - a couple not related to you? It''s an unusual gift, indeed, but that''s exactly what you''ll be doing as a marriage mentor. As you pour your wisdom into another couple who has not yet traveled the distance you have in your own marriage, you''ll impart an invaluable gift that this couple would never receive on their own. That''s why we''re thrilled at the thought of your interest in marriage mentoring. We also believe you''ll find it to be one of the most rewarding activities your marriage will ever enjoy.Before we reveal the fringe benefits to your own relationship however (see chapter 4), we want to be sure you begin this journey with the big picture in view. So, we''ll explain exactly what we mean by marriage mentoring, show you what the role entails, and clue you in to how you can avoid the common mistakes some beginning marriage mentors make.WHAT MARRIAGE MENTORING IS AND ISN''TMentoring is a brain to pick, a shoulder to cry on, and a kick in the pants.JOHN C. CROSBYEven though Rodger and Lynne Schmidt had their sights set on going to Africa as missionaries, they still struggled. "Is this really something we should be doing?" they were asking themselves.Erik Johnson tells their story in an article he wrote for Leadership Journal.1 "At the same time in the same city, another couple was also wrestling with their call, though from the other end of a missionary career. Now retired, this couple was asking, ''After forty-one years as missionaries in Africa, who are we? Our home and life work are on another continent. What is our life all about?''"A mentoring program at Denver Seminary brought these two couples together. And it was a great match. Through this mentoring relationship, the Schmidts'' call was confirmed, and the retired couple discovered a profound sense of significance in their new role as mentors. "We felt encouraged, they felt validated," notes R
-Publisher