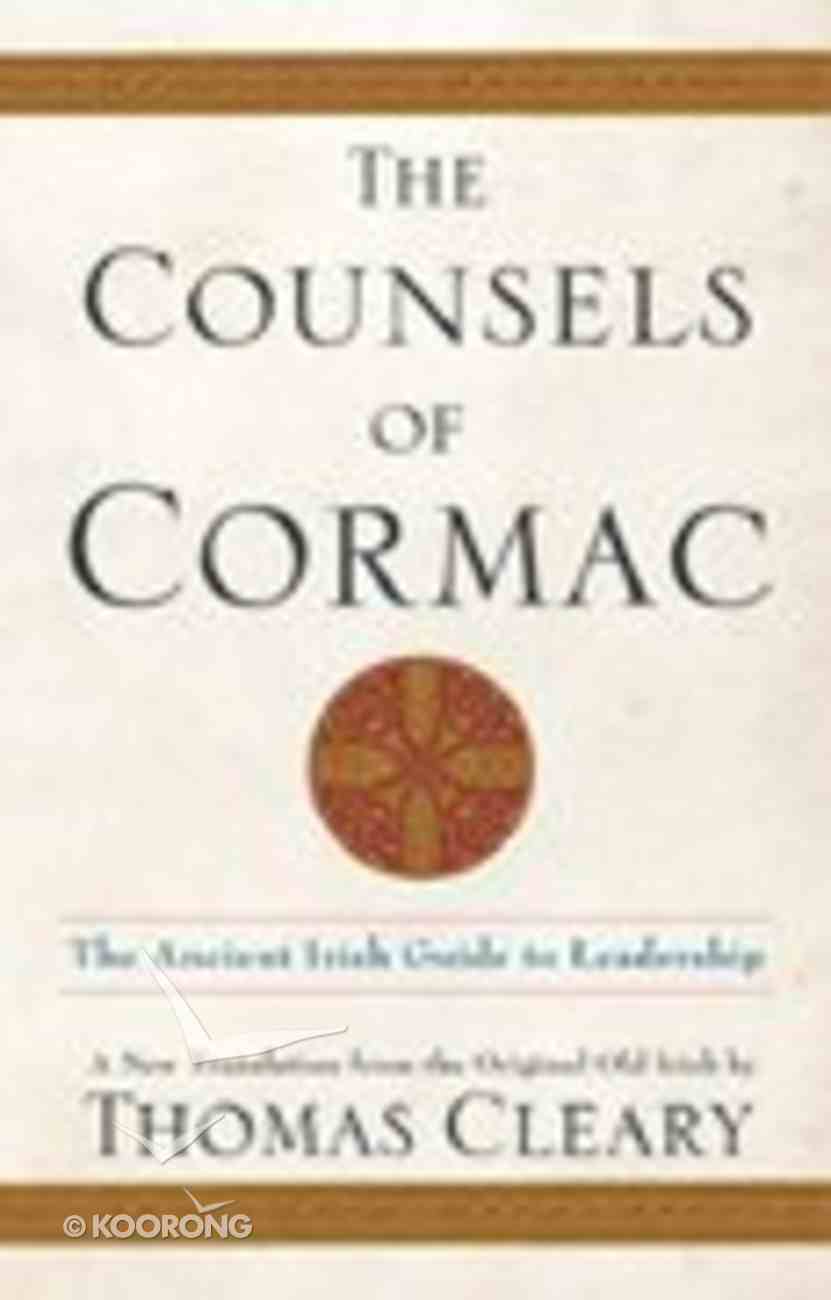 The Counsels of Cormac

Long before Machiavelli's "The Prince," "How to Win Friends and Influence People," The Japanese "Book of Five Rings," "Seven Habits Of Highly Effective People," and "The Fifth Discipline," there was the indispensable, bare-bones advice of the great Irish king, Cormac,...

Unavailable. We are not able to supply this item.

Long before Machiavelli's "The Prince," "How to Win Friends and Influence People," The Japanese "Book of Five Rings," "Seven Habits Of Highly Effective People," and "The Fifth Discipline," there was the indispensable, bare-bones advice of the great Irish king, Cormac, who imparted essential lessons on how to be a great leader and how to live a life that was both productive and fulfilling. In these pages is the wisdom of thousands of years of Celtic civilization, now available in a masterful new translation by Thomas Cleary.^In the tradition of the "Tao Te Ching" and "The Art of War," this ancient manual offers moral and practical instructions for wise and successful leadership--all imbued with distinctly Celtic flavor. ^Celtic lore is replete with legends recounting the contact and cooperation between the ancient Irish peoples and the other great cultures of antiquity (including the Minoan, Egyptian, Greek, and Hebrew) and their influence on Celtic ideas and values. Knowledge was
-Publisher

i O Cormac, Grandson of Conn," said Carbre, "What is best for a king?" "That's easy," said Cormac: Composure rather than wrath, Patience rather than contention, Geniality rather than arrogance. Attention to tradition, True reciprocity, Hostages in custody. Military action for just cause, Justice without bloodshed, Leniency within the integrity of the law. Goodwill to tribes, Distinct guarantees, Just judgments, Fasting against neighboring territories. Glorifying the sacred, Respecting poets, Adoration of God. Productivity in his reign, Attention to every unfortunate, Many charities. Fruit on trees, Fish in estuaries, Fertile land. Ships invited into port, Goods imported from overseas, Appropriation of things cast up by the sea. Silk clothing, A hand wielding swords in defense of every tribe, Attacks across borders. Let him visit the ailing, Let him improve the condition of the indigent. Let him have legitimate claim to truth, Let him rebuke falsehood. Let him love justice, Let him quell fear. Let him destroy criminals, Let him bring just pronouncements, Let him support every branch of learning. Let him purchase what is valuable, Let him improve what is worthless, Let him have abundant wine and mead. Let him knit every peace treaty together, Let him declare every clear judgment, Let him speak every truth. "For it is through the truth of the chieftain that God gives all that." ii O Cormac, Grandson of Conn," said Carbre, "What is the proper authority of kingship?" "That's easy. The authority that rules over a stable land I have and will give back to you," said Cormac to Carbre: Let him contain the powerful, Let him execute the evil, Let him foster the good. Let him subdue outlaws, Let him stop robbery and theft, Let him establish order in relations. Let him contract peace treaties, Let him establish law, Let him correct injustice and punish illegal acts. Let him sentence criminals, Let him free the innocent, Let him protect the righteous, Let him constrain the unrighteous. Let him warn outlaws: Full liability for everyone responsible, The whole penalties for accessories with knowledge, Half penalties for those without knowledge. With the dignity of a king And the prerogatives of a chieftain, Let him maintain the integrity of the right proper to every man Of what is his of sea and land With rightful properties for the tribes that are his. In regard to crimes of hand, Goings about of feet, What the eyes look at, Misdeeds of speech, What the ears listen to, With true facts in confidence He clarifies and attends to the right of every chief: Let him bring every one together under law. "These are the legal prescriptions, the rights and duties, of a chieftain in respect to tribes." iii O Cormac, Grandson of Conn," said Carbre, "What is best for the interest of a tribe?" "That's easy," said Cormac: Gathering of good people, Frequent conferences, An inquiring mind. Consulting the wise, Destroying every evil, Bringing about every good. A regular court,

God Loves You Just the Way You Are!
Paperback