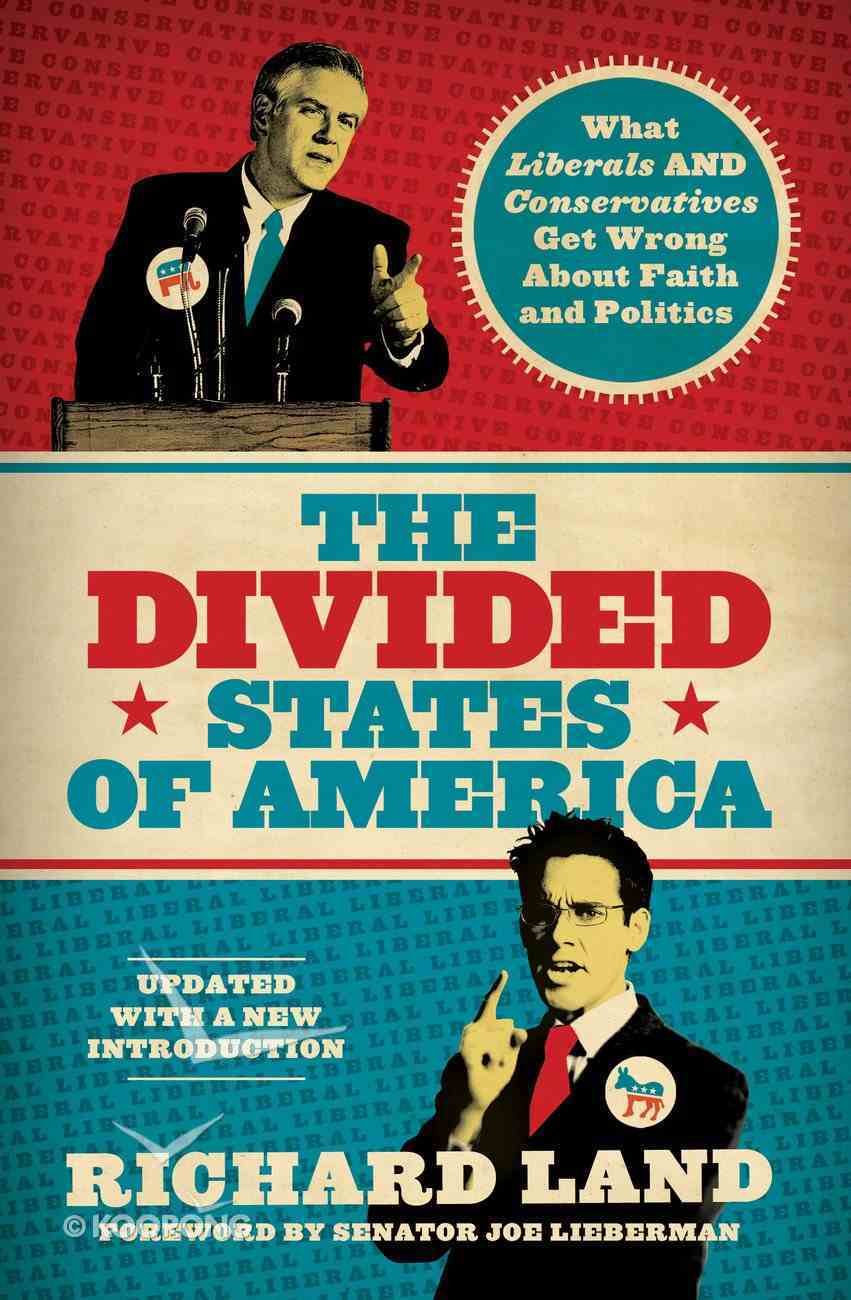 The Divided States of America

^ According to Dr. Richard Land, both sides of America's culture wars are getting it wrong. God has much ^ more to do with America than the Liberal Left would have us believe. But the Conservative Right misses the...

^
According to Dr. Richard Land, both sides of America's culture wars are getting it wrong. God has much

^
more to do with America than the Liberal Left would have us believe. But the Conservative Right misses the mark too when they merge God and America, tacitly (or not-so-tacitly) assuming that "God is on our side."?? In an arena where "political balance" has come to mean people from opposite ends of the ideological spectrum screaming at one another on a talk-show panel, Dr. Land seeks common ground. In answer to the hot air of extremist rhetoric, he offers cool reason, historical context, and constructive ideas for the future.???? In this provocative book, Dr. Land unearths surprising insights as he probes questions such as:?? what liberals AND conservatives are both missing, and why;

^
what a healthy role of religion in American life would look like; why ALL of us need the separation of church and state; whether this country has a special role to play in the world; and why this all matters to believers and non-believers.?? Are we the Divided States of America? Find out what you haven't been hearing in the God-and-country shouting match.?? Dr. Land sheds light where others-from left and right-sow confusion. One can disagree on specific policies and still laud the author's dedication to America's founding values and his grasp of the proper role of religion in public life. The Divided States of America????? Is essential reading for fair-minded people.

^
One of the clearest, most tightly argued, and informative accounts of religion in the public square today. . . .

^
Anybody who claims to know American political life without having read it is missing a lot of the story.

^
This is a lucid statement of a reasonable position on the place of religion in public life. While the author writes from a committed, Evangelical standpoint, his views on church/state relations will be plausible to many who do not share his religious commitment.

^
Baptists in America have a vibrant tradition of defending freedom, and religious freedom in particular.

^
This thoughtful book demonstrates how that tradition helps us to think in fresh ways about the foundations of freedom.


A popular look at the separation of church and state: what it is, what it isn't, and why it matters for the future of religion in America.

^^
Everywhere, it seems, the question is being raised, "What's God got to do with America?" According to Richard Land, both sides of the worldview wars, Liberals and Conservatives, are fundamentally missing the mark. "The country needs a new way to think about this question," says Dr. Land. "When neither side is interested in listening to the other, but each side responds by shouting so loudly that their opponents either can't or won't listen, you generate a lot of heat, but very little light. And while the shouting match may make good media, the truth is that underlying this debate are critical assumptions that will radically shape the future of this country for good or for ill. It's high time we realize what they are and learn how to respond in ways that will cut through our current cultural impasse."

A popular look at the separation of church and state: what it is, what it isn't, and why it matters for the future of religion in America.

An alarm-ringing but intelligent and fair-minded revelation of the backlash against traditional moral values, presented in an accessible and practical way using the sports analogy of fair play. Explains why religiously-informed moral values are under threat in a one-sided interpretation of church and state. Empowers readers by helping them to clarify confusing viewpoints and motivating them to act on what they believe.
-Publisher

Richard Land (D.Phil., University of Oxford ) serves as president of the Southern Baptist Conventions Ethics & Religious Liberty Commission. Land has represented Evangelicals before Congress and U.S. presidents and has served as a commissioner of the U.S. Commission on International Religious Freedom since 2001. Time named Land one of the "Twenty-five Most Influential Evangelicals in America in 2005.
Land is a frequent contributor to news journals, including the online publications On Faith (Newsweek and Washington Post) and Beliefnet. A prolific author, Land has served as a pastor, professor, theologian, and public policy advocate, and has written Mercury Rising: 8 Issues That Are Too Hot to Handle and The Divided States of America?: What Liberals AND Conservatives are missing in the God-and-country shouting match!

Christianity and Wokeness: How the Social Justice Movement is Hijacking the Gospel - and the Way to Stop It
Owen Strachan
Hardback