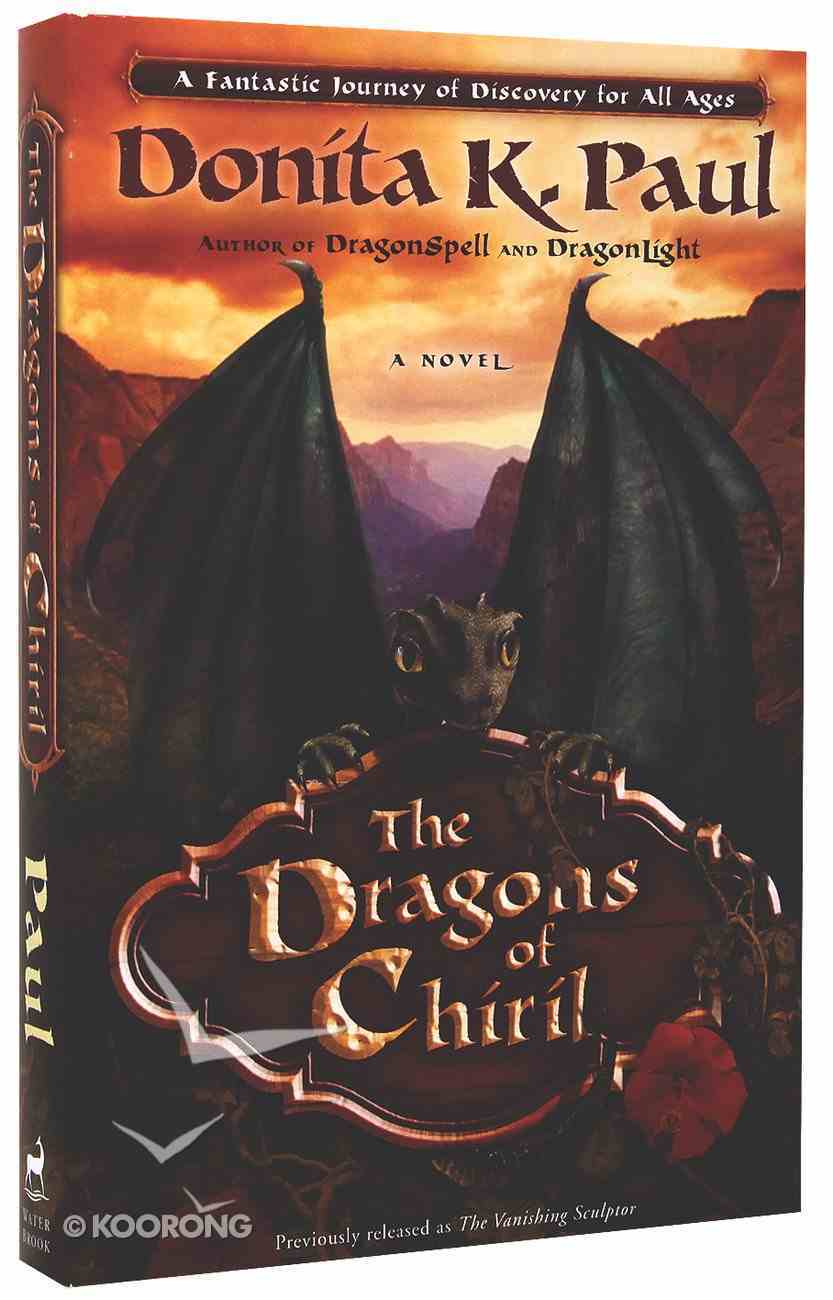 Before DragonSpell, on a different continent and a different time, a young emerlindian's desperate decision threatens to disrupt the foundation of the world. Tipper has been caring for her family's estate for years now, ever since her father disappeared,...

Clash of the Kingdoms: The Epic Battle Between the Supernatural Forces of Good and Evil
Brian France
Paperback

Before DragonSpell, on a different continent and a different time, a young emerlindian's desperate decision threatens to disrupt the foundation of the world.

Tipper has been caring for her family's estate for years now, ever since her father disappeared, making a living by selling off his famous artwork. Then she learns that three statues she sold were carved from an ancient foundation stone, and the fabric of her reality is crumbling.

She must free her father and save the world. But she can't do it alone.

Her ragtag band of adventurers includes Beccaroon, a giant parrot; Bealomondore, an aristocratic young artist; a handsome dragonkeeper prince; the Wizard Fenworth; and the tumanhofer librarian Librettowit. Together they travel through valleys and kingdoms and consort with purveyors of good and agents of evil to find and reunite the missing statues. Will they learn to rely on Wulder's grace and guidance along the way?

Previously released as The Vanishing Sculptor.

"A fantastic journey of discovery for all ages."
-Publisher

A View from a Tree

Sir Beccaroon cocked his head, ruffled his neck feathers, and stretched, allowing his crimson wings to spread. The  branch beneath him sank and rose again, responding to his weight. Moist, hot air penetrated his finery, and he held his wings away from his brilliant blue sides.

“Too hot for company,” he muttered, rocking back and forth from one scaly four-toed foot to the other on a limb of a sacktrass tree. The leaves shimmered as the motion rippled along the branch. “Where is that girl?”

His yellow head swiveled almost completely around. He peered with one eye down the overgrown path and then scoped out every inch within his range of vision, twisting his neck slowly.

A brief morning shower had penetrated the canopy above and rinsed the waxy leaves. A few remaining drops glistened where thin shafts of tropical sun touched the dark green foliage. On the broot vine, flowers the size of plates lifted their fiery red petals, begging the thumb-sized bees to come drink before the weight of nectar broke off the blooms.

Beccaroon flew to a perch on a gnarly branch. He sipped from a broot blossom and ran his black tongue over the edges of his beak. A sudden breeze shook loose a sprinkle of leftover raindrops. Beccaroon shook his tail feathers and blinked. When the disturbance settled, he cocked his head and listened.

“Ah! She’s coming.” He preened his soft green breast and waited, giving a show of patience he didn’t feel. His head jerked up as he detected someone walking with the girl.

“Awk!” The sound exploded from his throat. He flew into a roost far above the forest floor, where he couldn’t be seen from the ground, and watched the approach of the girl placed under his guardianship. Tipper strolled along the path below, wearing a flowing golden gown over her tall, lean body. She’d put her long blond hair in a fancy braid that started at the crown of her head. A golden chain hung from each of her pointed ears. And she’d decorated her pointed facial features with subdued colors—blue for her eyelids, rose for her lips, and a shimmering yellow on her cheeks. Beccaroon sighed. His girl was lovely.

The bushes along the path behind her rustled. Beccaroon’s tongue clucked against his beak in disapproval. Hanner trudged after Tipper, leading a donkey hitched to a cart. The man’s shaggy hair, tied with a string at the back of his neck, hung oily and limp. Food and drink stained the front of his leather jerkin, and his boots wore mud instead of a shine. The parrot caught a whiff of the o’rant from where he perched. The young man should have carried the  fragrance of citrus, but his overstrong odor reminded Beccaroon of rotten fruit.

A tree full of monkeys broke out in outraged chatter. Tipper, when alone, walked amid the animals’ habitat without causing alarm. “Smart monkeys,” said Beccaroon. “You recognize a ninny-napconder when you see one.” He used the cover of the monkeys’ rabblerousing to glide to another tree, where he could hide at a lower level.

He had an idea where Tipper would lead Hanner.

“Here it is,” said the pretty emerlindian. She pulled vines from a clump, revealing a gray statue beneath. “My father named this one Vegetable Garden.”

Hanner pulled off more vines as he made his way slowly around the four-foot statue. “Vegetable Garden? Mistress Tipper, are you sure you have the right one? This is a statue of a boy reading a book. He’s not even chewing a carrot while he sits here.”

“Father used to say reading a good book was nourishment.”

Hanner scratched his head, shrugged his shoulders, and went to fetch the donkey and cart. Tipper’s head tilted back, and her blue eyes looked up into the trees. Her gaze roamed over the exact spot Beccaroon used as a hidden roost. Not by the blink of an eyelash did she betray whether she had seen him. Hanner returned.

Tipper spread out a blanket in the cart after Hanner maneuvered it next to the statue, then helped him lift the stone boy into the back. Hanner grunted a lot, and Tipper scolded.

“Careful… Don’t break his arm… Too many vines still around the base.”

They got the statue loaded, and Tipper tucked the blanket over and around it. She then gave Hanner a pouch of coins.

“This is for your usual delivery fee. I couldn’t put in any extra for traveling expenses. I’m sure you’ll be reimbursed by our buyer.” He grunted and slipped the money inside his jerkin.

Tipper clasped her hands together. “Be careful. And give Master Dodderbanoster my regards.”

He tipped his hat and climbed aboard the cart. “I always am. And I always do.”

She stood in the path until the creak of the cart wheels could no longer be heard.

Beccaroon swooped down and sat on a thick branch wrapped with a leafless green creeper. The vine looked too much like a snake, so he hopped to another limb.

“I don’t think so either, Bec, but what else can I do? I sell the artwork only as a last resort when we need quite a bit of cash. The well needs re-digging.” Tipper pulled a tight face, looking like she’d swallowed nasty medicine. “We’ve sold almost everything in the house. Mother sees our things in the market and buys them back. Sometimes I get a better price for a piece the second time I sell it, and sometimes not.” Beccaroon swayed back and forth on his feet, shaking his head.

“She never catches on?”

“Never.” Tipper giggled. “She shows remarkably consistent taste. When she spots something that was once ours, she buys it, brings it home, shows it off to me, and tells me she has always wanted something just like it. And she never notices pictures gone from the walls, rugs missing in rooms, chairs, tables, vases, candlesticks gone. I used to rearrange things to disguise a hole in the décor, but there’s no need.” The sigh that followed her explanation held no joy. Tipper looked around. “There never is a place to sit in this forest when one wants to plop down and have a good cry.”

“You’re not the type to cry. I’ll walk you home.” Beccaroon hopped down to the path.

His head came up to her waist. She immediately put her dainty hand on his topknot and smoothed the creamy plumes back. “You’re the best of friends. Keeping this secret would be unbearable if I didn’t have you to confide in.”

Beccaroon clicked his tongue. “No flattery, or I shall fly away.”

They moseyed back the direction Tipper had come, opposite the way Hanner had departed.

“I know.” Tipper gently twisted the longest feather from the center of Bec’s crest around her forefinger.

The grand parrot jerked his head away and gave her his sternest glare. She was his girl, but he still wouldn’t let her take liberties. She didn’t seem to notice he was disgruntled, and that further blackened his mood.

“Hanner is all right, Bec. He takes the statues to Dodderbanoster. Dodderbanoster takes them to cities beyond my reach and gets a fair price for them. Sometimes I think the pouch Hanner brings back is way too full.”

Beccaroon clicked his tongue. “Your father is a master artist. His work is worth a mighty price.”

“Hanner says sometimes Dodderbanoster sells them to a dealer who takes them even farther away, to thriving  districts. Wealthy patrons bid to own a Verrin Schope work of art.” She held back a leafy branch so Beccaroon could strut by with ease. “Late at night when I sit in my window and think, I hope that Papa will see one of his sculptures or
paintings in a market in some far away metropolis.

“I imagine the scene. He exclaims with shock. He turns red and sputters and shakes his fists. In fact, he’s so angry he comes straight home and yells loud and long at his daughter who dares to sell his masterpieces.”

Beccaroon rolled his shoulders, causing his wings to tilt out, then settle against his sides. “What of your mother? Does she ever mention your father’s absence?”

“No, why should she? He’s been gone for years, but she still sees him. She talks to him every night after his workday is done. Promenades through the garden with him. Pours his tea, and just the other evening I heard her fussing at him for not giving enough money to the parish.”

“I suppose she dipped in the household funds to make up for his neglect.”

Tipper sighed. “Yes, she did.”

They went on a ways in silence.

Tipper picked a bloom, savored its spicy odor, then placed it behind one pointed ear. “Mother has an idea in her head.”

“For anyone else, the head is a splendid place to keep an idea. For your mother, she should just let them go.”

“She’s determined to visit her sister.” Tipper raised her eyebrows so that the upside-down V was even more  pronounced. “She’ll go if she manages to pack her long list of necessities. Some of the items are quite unreasonable.”

Beccaroon snatched a nut from an open shell on the ground. He played the small nugget over his tongue, enjoying its sweetness, then swallowed. “And you? Is she taking you?”

“No, I’m to stay here and make sure Papa is comfortable and remembers to go to bed at night instead of working till all hours in his studio.”

“I don’t like you being alone in that house.”

“Of course, there are the servants.”

Beccaroon ruffled his feathers, starting at the tuft on top of his head, fluffing the ruff of his neck, proceeding down his back, and ending with a great shake of his magnificent tail.

“It seems I will have to move into the house.”