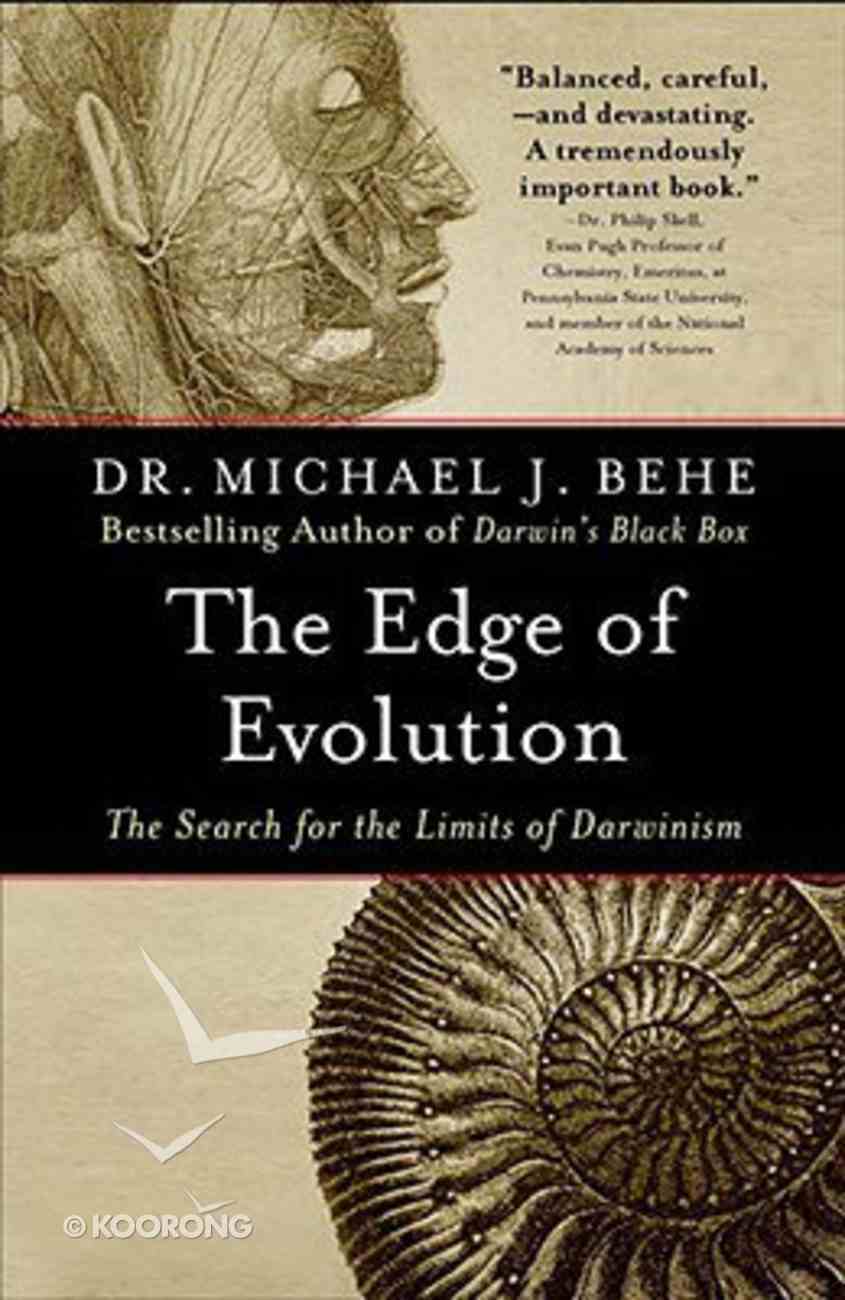 The Edge of Evolution

When Michael J. Behe's first book, "Darwin's Black Box," was published in 1996, it launched the intelligent design movement. Critics howled, yet hundreds of thousands of readers -- and a growing number of scientists -- were intrigued by Behe's claim...

The Evolution of Adam: What the Bible Does and Doesn't Say About Human Origins
Peter Enns
Paperback

When Michael J. Behe's first book, "Darwin's Black Box," was published in 1996, it launched the intelligent design movement. Critics howled, yet hundreds of thousands of readers -- and a growing number of scientists -- were intrigued by Behe's claim that Darwinism could not explain the complex machinery of the cell.^Now, in his long-awaited follow-up, Behe presents far more than a challenge to Darwinism: He presents the evidence of the genetics revolution -- the first direct evidence of nature's mutational pathways -- to radically redefine the debate about Darwinism.^How much of life does Darwin's theory explain? Most scientists believe it accounts for everything from the machinery of the cell to the history of life on earth. Darwin's ideas have been applied to law, culture, and politics. ^But Darwin's theory has been proven only in one sense: There is little question that all species on earth descended from a common ancestor. Overwhelming anatomical, genetic, and fossil evidenc
-Publisher

Chapter One: The Elements of Darwinism Life on earth developed over billions of years by utter chance, filtered through natural selection. So says Darwinism, the most influential idea of our time. If a rare random mutation in a creature's DNA in the distant past helped the lucky mutant to leave more offspring than others of its species, then as generations passed the species as a whole would have changed. Incessant repetition of this simple process over eons built the wonders of biology from the ground up, from the intricate molecular machinery of cells up to and including the human mind. That's the claim, at least. But is it true? To answer that question, Darwin's theory has to be sifted carefully, because it isn't just a single concept -- it actually is a mixture of several unrelated, entirely separate ideas. The three most important ideas to keep straight from the start are random mutation, natural selection, and common descent. Common descent is what most people think of when they hear the word "evolution." It is the contention that different kinds of modern creatures can trace their lineage back to a common ancestor. For example, gerbils and giraffes -- two mammals -- are both thought to be the descendants of a single type of creature from the far past. And so are organisms from much more widely separated categories -- buffalo and buzzards, pigs and petunias, yaks and yeast. That's certainly startling, so it's understandable that some people find the idea of common descent so astonishing that they look no further. Yet in a very strong sense the explanation of common descent is also trivial. Common descent tries to account only for the similarities between creatures. It says merely that certain shared features were there from the beginning -- the ancestor had them. But all by itself, it doesn't try to explain how either the features or the ancestor got there in the first place, or why descendants differ. For example, rabbits and bears both have hair, so the idea of common descent says only that their ancestor had hair, too. Plants and animals both have complex cells with nuclei, so they must have inherited that feature from a common ancestor. But the questions of how or why are left hanging. In contrast, Darwin's hypothesized mechanism of evolution -- the compound concept of random mutation paired with natural selection -- is decidedly more ambitious. The pairing of random mutation and natural selection tries to account for thedifferencesbetween creatures. It tries to answer the pivotal question, What could cause such staggering transformations? How could one kind of ancestral animal develop over time into creatures as different as, say, bats and whales? Let's tease apart that compound concept. First, consider natural selection. Like common descent, natural selection is an interesting but actually quite modest notion. By itself, the idea of natural selection says just that the more fit organisms of a species will produce more surviving offspring than the less fit. So, if the total numbers of a species stayed the same, over time the progeny of the more fit would replace the progeny of the less fit. It's hardly surprising that creatures that are somehow more fit (stronger, faster, hardier) would on average do better in nature than ones that were less fit (weaker, slower, more fragile). By far the most critical aspect of Darwin's multifaceted theory is the role of random mutation. Almost all of what is novel and important in Darwinian thought is concentrated in this third concept. In Darwinian thinking, the only way a plant or animal becomes fitter than its relatives is by sustaining a serendipitous mutation. If the mutation makes the organism stronger, faster, or in some way hardier, then natural selection can take over from there and help make sure its offspring grow numerous. Yet until the random mutation appears, natural selection can only twiddle its thumbs. Ra
-Publisher